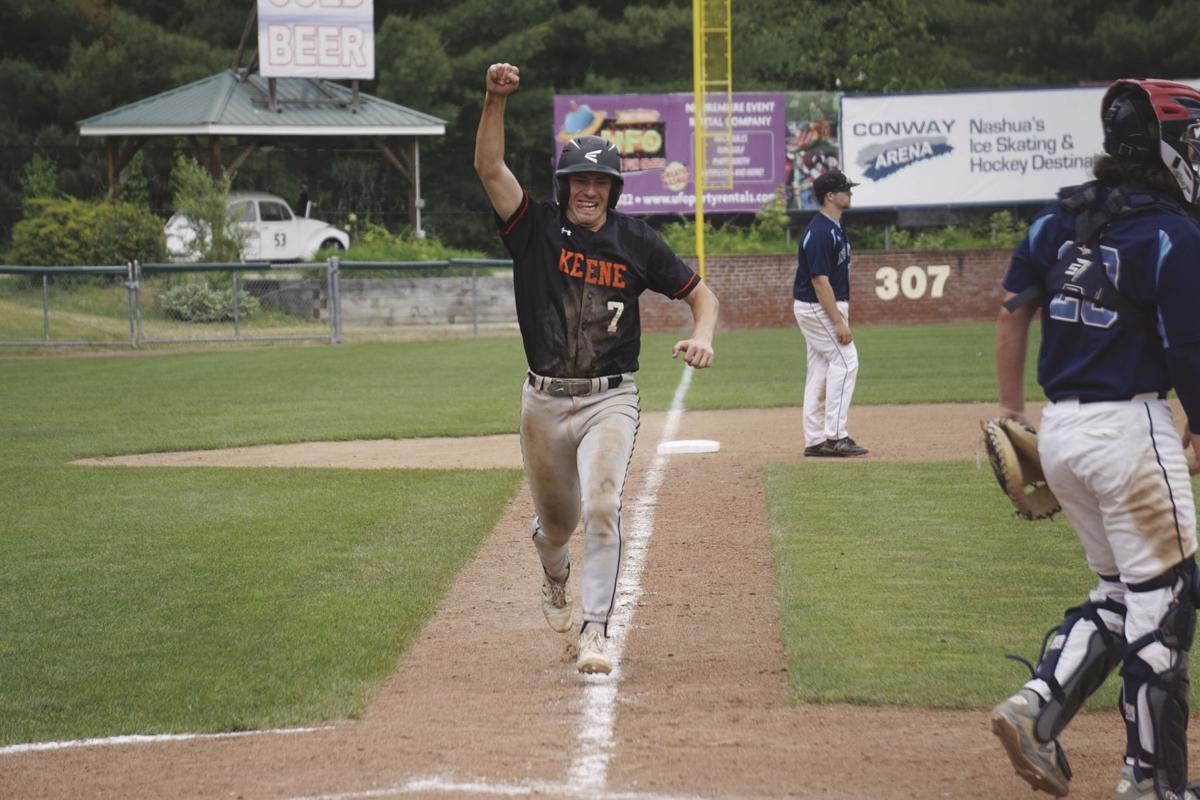 Senior Zach Mooers pumps his fist as he scores on Alex Charles’s single in the ninth inning of the Keene baseball team’s NHIAA playoff game against Nashua North Thursday at Holman Stadium. 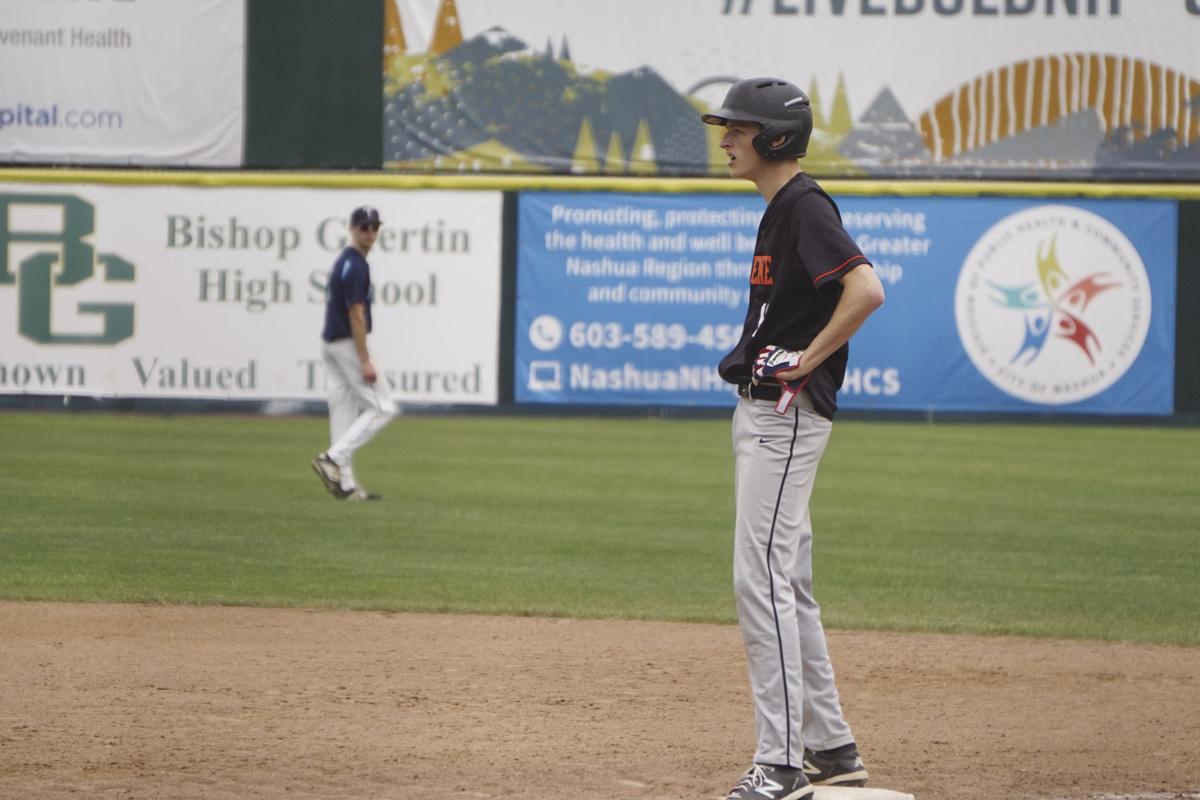 Senior Alex Charles stands on first base after his game-winning, two-RBI single in the ninth inning of the Keene baseball team’s NHIAA playoff game against Nashua North Thursday at Holman Stadium.

NASHUA — Something had to give eventually, right?

After nine innings of high-pressure baseball, it was the Keene baseball team that finally broke through in Thursday’s 3-0 win over Nashua North in the preliminary round of the NHIAA Division I tournament at Holman Stadium in Nashua.

Senior Alex Charles was the ninth-inning hero. His two-RBI single with the bases loaded brought home the game-winning runs.

“It felt great,” Charles said. “I’ve just been trying to get my swing better, put more balls in play and it just worked there. A lot confidence came out of that hit, for sure.”

Up until then, Keene’s Zach Mooers and Nashua North’s Alex Meesig went pitch-for-pitch on the mound, neither allowing the opposing offense to gain any traction.

Nobody even reached third base until the eighth inning.

It wasn’t until North made a pitching change in the top of the ninth inning that Keene found its offense.

Mooers started off that inning with a base hit, and Liam Conley and Sharik Khan followed suit with back-to-back bunts that turned into base hits when the guys hustled down the line.

All of a sudden, Keene had the bases loaded with nobody out and Charles stepping into the box.

Charles took care of business with the two-RBI single that got past the North second baseman, who was playing almost in the infield grass in an attempt to make a play at home plate. His positioning made the play on the hard-hit ground ball more difficult.

Mooers and Conley scored on the hit.

“You’re pumped,” Mooers said. “It’s hard to explain [that feeling of scoring]. There are just so many ways that you can describe it. It’s top-five greatest feelings of all time.”

“He’s a great athlete and he went toe-to-toe with Meesig,” said Keene head coach Dan Moylan. “It was a great pitchers’ matchup. Both guys threw a ton of strikes. Both teams played good defense behind them. A nice game to watch and really fun to be a part of.”

Mooers said it was the best game he’s pitched in his life, and he was quick to credit his defense for helping him out.

“I couldn’t have done it without them,” Mooers said.

The defense came up big in a handful of spots and committed no errors — a key part of any close game.

Austin Morris saved a run in the fifth inning after Meesig laced what looked to be an RBI double towards center field. Morris had other ideas and made the catch to end the inning.

“It was a good play, he’s a good athlete,” Moylan said. “It was a great play given, if it drops, that’s a run scored.”

Jared Schmitt — filling in for Mooers at shortstop — made some exceptional plays and recorded four putouts, including an unassisted double play to end the seventh inning.

Jaden Phillips was a wall behind the plate and made some key stops, particularly in the eighth inning when North was threatening with runners on first and third. If one balls gets to the backstop, the score might’ve been flipped, but Phillips made sure that didn’t happen.

Khan came in to relieve Mooers and record the final two outs of the game, which he did with relatively little drama.

“Sharik is a pretty polished pitcher out of the bullpen, and I knew we’d get strikes,” Moylan said.

The junior also continued his impressive playoff run at the plate, recording another two hits Thursday.

The Blackbirds head back to Holman Stadium Saturday for a quarterfinal matchup with Bishop Guertin. Game time is still to be determined. The Cardinals beat Keene 8-4 at the end of April.

“We’re excited, but we know what’s ahead,” Mooers said. “We’ve won two here, but we still have three left. We’re going to live it up right now, but when it comes to practice tomorrow, we’re going to come back and grind like we have been all year.”

“Onto the next game,” Charles agreed.

Peter Haas is slated to take the mound Saturday.