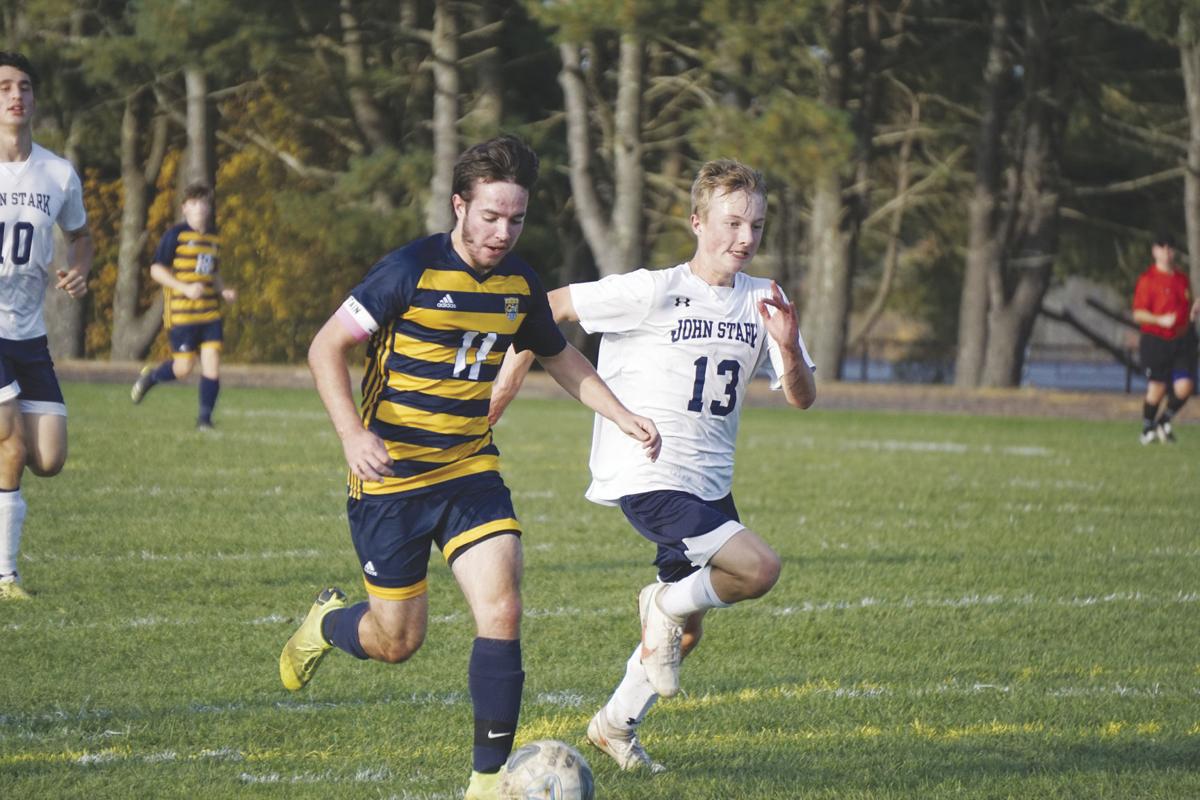 Senior Zach Burgess of the ConVal boys soccer team runs by John Stark defender, Nathan Restuccia, during their game on Tuesday in Peterborough. 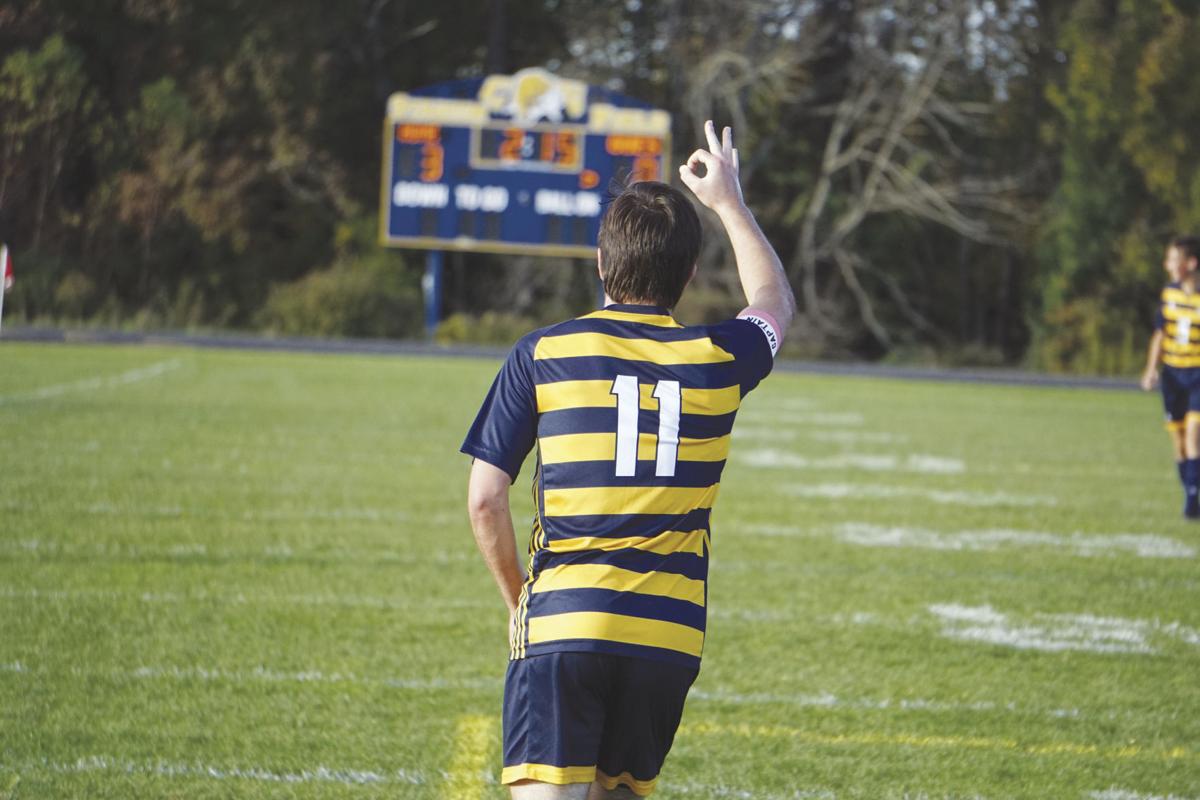 Senior Zach Burgess of the ConVal boys soccer team puts up three fingers to signify the hat trick during the Cougars’ game against John Stark Tuesday in Peterborough.

Senior Zach Burgess of the ConVal boys soccer team runs by John Stark defender, Nathan Restuccia, during their game on Tuesday in Peterborough.

Senior Zach Burgess of the ConVal boys soccer team puts up three fingers to signify the hat trick during the Cougars’ game against John Stark Tuesday in Peterborough.

PETERBOROUGH — When Zach Burgess scored with two minutes to play in the first half, he put up three fingers to the crowd.

The senior had just completed the hat trick, and the ConVal boys soccer team was well on its way to a 5-1 win over John Stark Tuesday in Peterborough.

Burgess’ hat trick goal came on a hustle play, as the former goalie raced past the John Stark defensive line and found room to put the ball in the net.

“Really, I was just looking to get past the defense,” Burgess said. “The first two were tap-ins — right place, right time — then the last one I was just trying to hit it as hard as I can.”

Thirty seconds before his third goal of the game, Burgess scored his second after junior Bennett Saxe hit the left post and Burgess was in the perfect spot to clean up the rebound.

“[Burgess is] a difference-maker,” said ConVal head coach Josh Smith. “It really showed that he’s a quality goal scorer. He’s opportunistic and finds his way to [the ball].”

His three goals were part of a relentless Cougar offense, creating scoring chances left and right throughout the first half.

Senior Owen Kotula was the first to cash in, after junior Jake Daniels’ shot in the 27th minute was blocked in front of the net, and Kotula finished off the rebound.

“I was just there,” Kotula said. “Jake was coming down the left wing and he just played it across.”

Kotula’s goal seemed to be a spark for the ConVal offense, and they just kept rolling from there.

“As the first half wore on, we really noticed that we could leverage the space out there,” Smith said. “Owen was just sitting wide, getting the ball and then playing crosses in and playing the in-line. He was putting a lot of pressure on the defense.”

Kotula recorded an assist on Burgess’ first goal — a perfect crossing pass to Burgess, who made the finish look easy.

“All game, I was sitting with the back line because there was room for that,” Kotula said. “The center-mid would find me out wide, then I’d just find Zach.”

“It was working,” Burgess agreed. “Hopefully we can keep doing that.”

By halftime, ConVal was ahead 4-0. All of their goals in the first half came in the final 13 minutes.

“Overall, I think we really dictated the tempo for much of the game,” Smith said. “First half we really dominated from the beginning and showed that we’re a team that can cause some problems in the playoffs.”

Bennett Saxe scored the only ConVal goal of the second half. It came in the 61st minute.

Senior Fletcher Maggs was a big part of the offensive production, feeding his teammates with perfectly-placed through balls and giving them opportunities to score.

John Stark senior Jackson Souther scored the Generals’ only goal, midway through the second half, and that was all the ConVal defense allowed.

“Defensively I thought it was pretty good,” Smith said. “A few times, there were some gaps, so we just have to close those down.”

ConVal moved to 6-6-1 with the win, putting them in ninth place in Division II with three games left to play.

“If we can win out our last three games, we’ll be in a good spot,” Kotula said. “We’ve fought all the top-five teams hard, so I think in the playoffs we can make a run.”

The top 12 teams make the postseason.

“Hopefully this solidifies our spot a little bit,” Smith said. “We’re pushing for a home playoff game. We’re in the mix.”

The Cougars look to continue to climb up the standings against Pelham Friday at 4 p.m. in Peterborough.