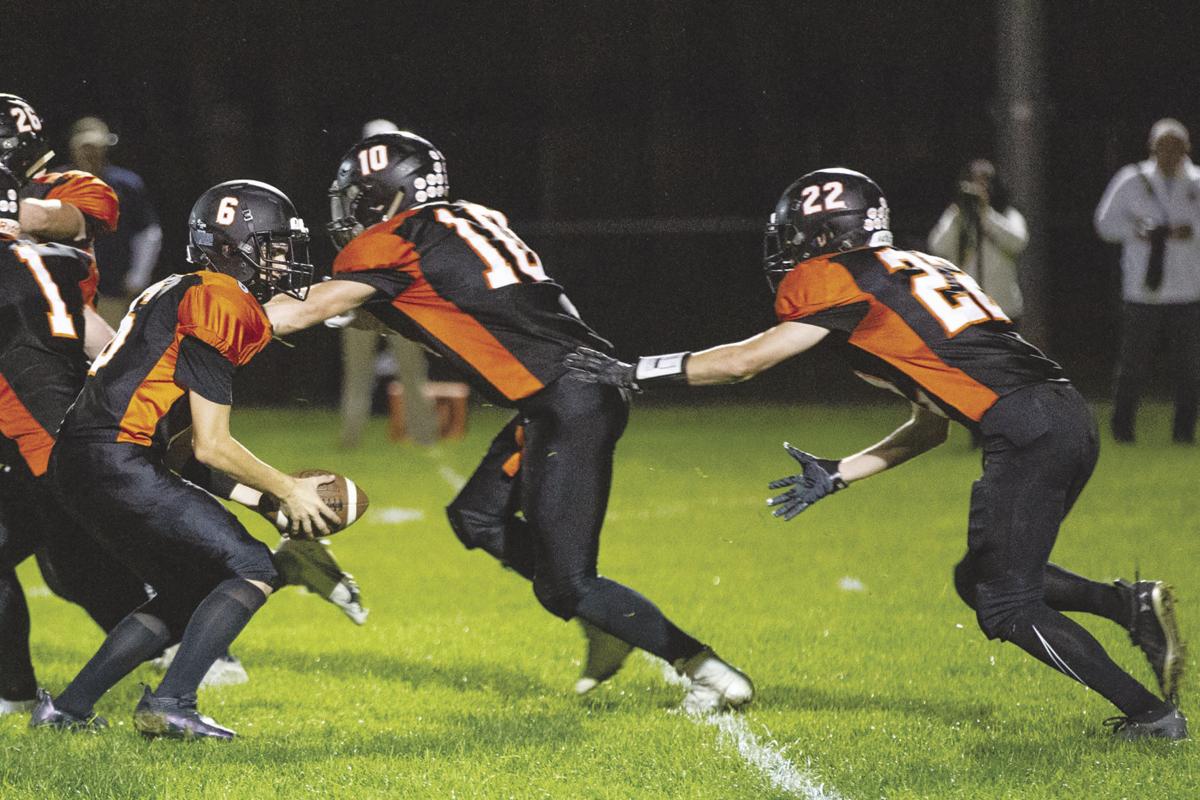 Keene quarterback, sophomore Aiden Tarr hands the ball off to sophomore Seamus Howard (22) during a play against Windham in the second quarter at Alumni Field Friday. 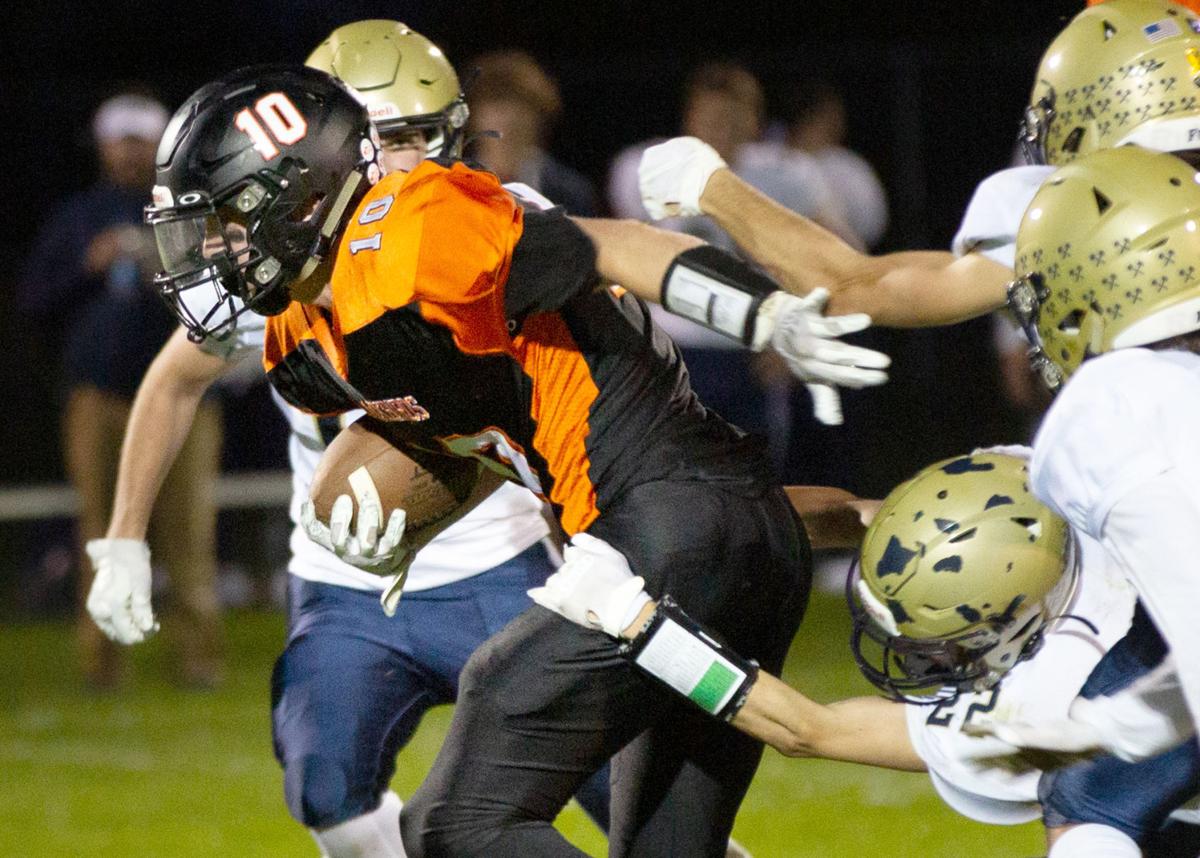 Keene quarterback, sophomore Aiden Tarr hands the ball off to sophomore Seamus Howard (22) during a play against Windham in the second quarter at Alumni Field Friday.

Howard had just sealed a 21-14 win for the Keene football team over Windham Friday night in Keene.

“My coach told me to bounce over, so that’s what I did,” Howard said. “I read it perfectly and I got the pick. It was great.”

Down 21-7 with just over two minutes to play in the fourth, Windham blocked a Keene punt — by Howard, who later made up for it — and returned it for a quick touchdown.

Now down by just one score, 21-14, Windham pulled off a successful onside kick and started another drive at the Keene 47-yard line with 1:52 on the clock.

Windham got deep into Keene’s territory, but Howard came up with the clutch interception to seal the Blackbirds’ second win in a row.

“That blocked punt was hard,” Howard said. “There wasn’t much to do about it, we had to lock up and we did.

“Hearing that crowd, there’s nothing better,” Howard added. “My emotions are through the roof. This is what I needed.”

Keene took a 14-7 lead with less than a minute to play in the first half, on a 1-yard touchdown run from senior Austin Morris — what would be the eventual-game-winning touchdown.

Just before the touchdown run, Morris converted on a 4th-and-3 from the Windham 10-yard line, putting Keene at the 1.

Then Morris got the ball right back and punched it in.

Howard converted on the 2-point conversion on a rollout pass from sophomore quarterback Aiden Tarr to put Keene ahead 14-7.

Windham used the sidelines to drive down the field in the final minute of the half, but senior Keiran Norman intercepted DePietro to end the threat, and the Blackbirds were ahead by a touchdown at the break.

Keene found success on fourth down, going 3-for-3 — all on 4th-and-short — to keep possessions alive. All three fourth down conversions came on touchdown drives.

Windham started the game with possession, but a fumble gave Keene the ball at the Windham 39-yard line. Two fourth down conversions later, senior Jarrod Rokes punched it in from two yards out to put Keene ahead 6-0 after the extra point was missed.

Windham used three big pass plays on the next drive, including a 24-yard touchdown pass, to take the lead, 7-6, towards the end of the first quarter.

Morris made sure that lead didn’t stick, with the final touchdown drive of the half to give Keene the lead back, 14-7.

Windham pulled out the option play a handful of times throughout the second and third quarters, but the Keene defense was all over it every time.

Seniors Aiden Paju and Keller Grissom got off the defensive line quick, disrupting the plays in the backfield.

The third quarter was scoreless, and Keene went to the fourth up 14-7 with the football.

Keene’s first offensive drive of the fourth stalled at their own 45-yard line, but a 45-yard punt from Seamus Howard pinned Windham deep in their own territory. That was Howard’s second 45-yard punt of the game.

Again, Keene’s defense did its job, and senior Marcus Rokes made a big stop on 4th-and-2 to give Keene possession at the Windham 19-yard line with just under seven minutes to play, still ahead by a touchdown.

Marcus Rokes’ fourth down stop gave his brother Jarrod Rokes the chance to score his second touchdown of the game and give Keene a 21-7 lead with just 5:23 on the clock.

“With our type of football, that strong defense is absolutely essential,” said Keene head coach Linwood Patnode. “We’ve got to play tough, tough defense, and we’re playing it this year. We’ve gotten progressively better with the defense and I think we can get better than this.”

Windham got back within a touchdown on the blocked punt, and threatened to tie, but Keene ultimately got the job done.

Jarrod Rokes finished with two touchdowns and a sack. He has five touchdowns over the last two games.

“We’re still in our infancy, we’re still trying to build this thing,” Patnode said. “We’re not where we want to be yet. But we’re getting a hell of an effort, and they’re really, really good to work with at practice. Those other things will come with experience.”

Vote for the Sentinel Player of the Week! (Final poll of the fall season!)

Senior Luke Gay of the Fall Mountain football team was voted by readers as Sentinel Player of the Week for the week of Oct. 9-15. Read more