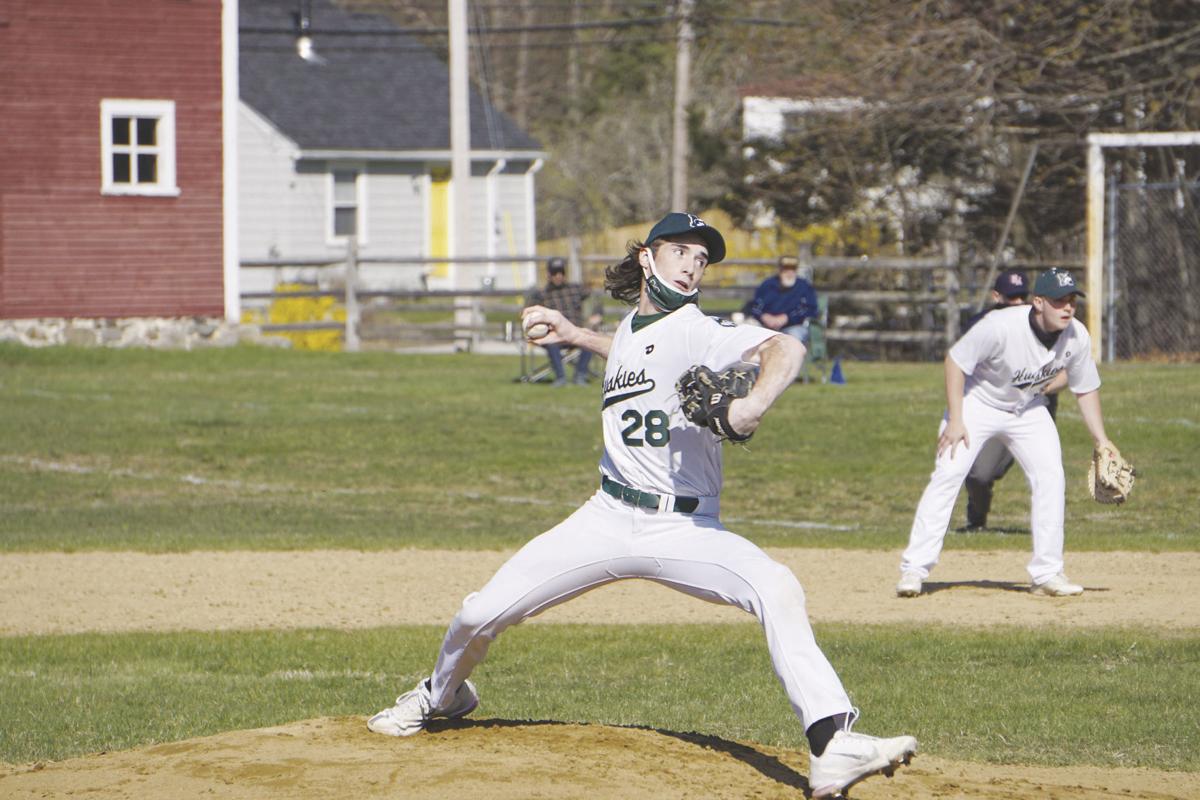 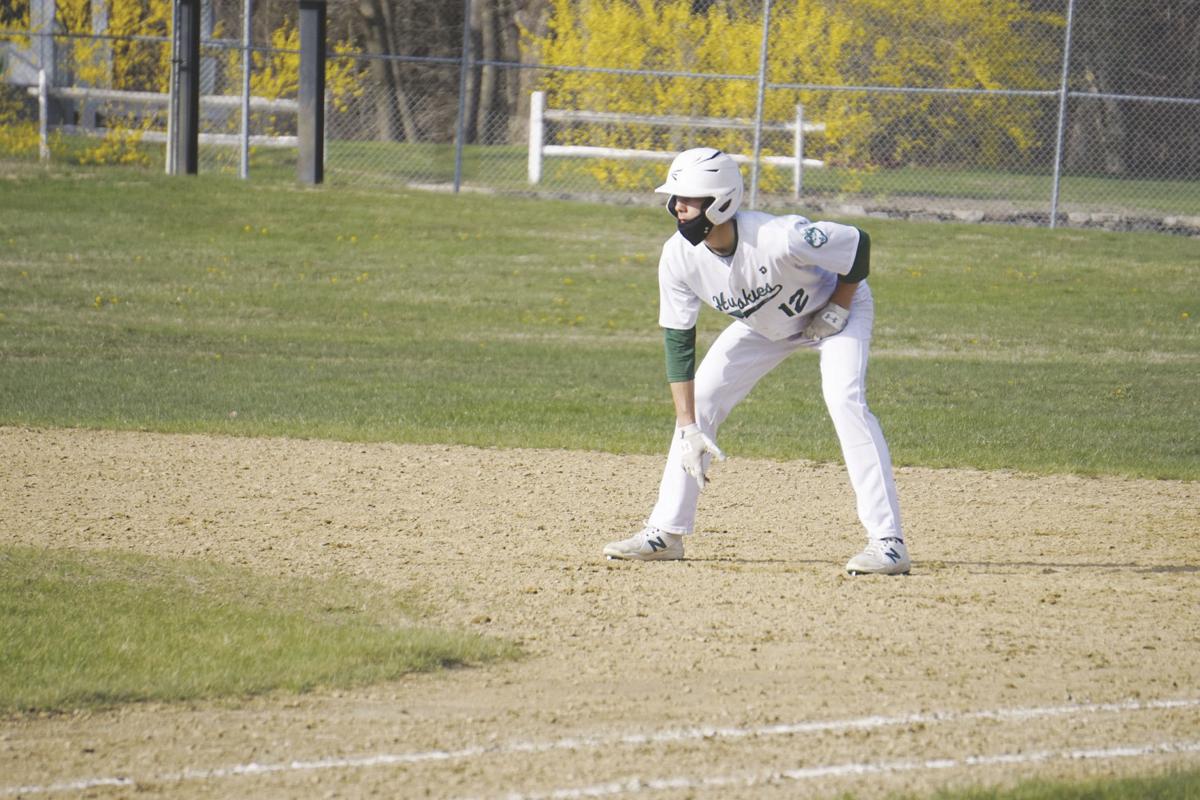 Senior Nate Doyle takes a lead at first base during the Monadnock baseball team’s win over Conant Tuesday in Jaffrey.

JAFFREY — Everything seemed to be clicking for the Monadnock baseball team Tuesday in Jaffrey.

The Huskies started hot and came away with a 15-1, five-inning victory over Conant.

Sophomore Cam Olivo pitched four strong innings for Monadnock (2-1), earning his first career varsity win. Olivo stuck out six batters while only giving up four hits and the one run in the fourth inning.

“He’s pitching better and better for us,” said Monadnock head coach Tom Cote. “He definitely commanded the strike zone today, which is what we wanted. If he can fill up the strike zone, he’s going to get guys out because his fastball is good and his breaking ball is good.”

Conant (0-2) found itself in trouble right away as the Huskies took advantage of the Orioles’ mistakes in the top of the first inning. That half inning saw two walks, a hit batter and an error. Monadnock didn’t record a hit in the inning, but, when the dust settled, had a 2-0 lead.

All in all, Conant walked seven Huskies.

Monadnock certainly benefitted from the mistakes, but helped themselves as well by getting the bats going early and often. Kevin Putnam, Victor Lotito, Will O’Brien and Nate Doyle each had two hits for the Huskies.

Doyle, hitting in the ninth spot, particularly seemed to see the ball well, ripping a triple into left-centerfield in the second inning and a double to the same spot in the third. He came around to score both times.

“That’s two games in a row he’s really hit the ball hard for us,” Cote said. “It’s great when you get that from a nine-hitter. No one expects it. He was able to crush some balls today — I mean, crush balls. If we can keep that going, we’ll be tough one through nine.”

Putnam also had a day to remember at the plate, going 2-4 with two doubles and three RBI.

Senior Hayden Ketola took the mound for the Orioles, only getting through 2+ innings before being pulled. Ketola didn’t seem to have control over his pitches, walking five in his outing and giving up five hits. He was charged with eight runs.

Classmate Griffin LaBonte came in for 1.2 innings in relief and was tagged for five earned runs, but only gave up three hits. Multiple balks made a bad situation worse for the senior.

Freshman Jordan Ketola then came in to pitch the final 1.1 innings. He gave up two runs and three hits.

The Orioles clearly still have some rust to shake off — two years’ worth of rust — but the good news is the team still has time to do that before the postseason tournament, which everyone qualifies for regardless of regular season record.

“Some of [these guys], it’s their third game in three years, so that’s tough,” said Conant head coach Aric LeClair. “But some of the mistakes we made you can’t blame on not playing because some of them were mental mistakes.”

Despite the game getting out of hand early, Conant stuck with it and scored a run in the fourth inning. Junior Garrett Somero recorded the only RBI for Conant, scoring classmate Malique Motazes on a base hit after Motazes hit a double earlier in the inning.

“Any time you don’t get shut out, it’s a good thing,” LeClair said.

It was one of the few positives from the game, LeClair added, in addition to some strong defensive plays, particularly a diving catch by Hayden Ketola in centerfield to end the top of the fifth inning.

“We’re getting there,” LeClair said. “We’ve got another month until it really counts. Piece by piece, we’ll get it.”

Monadnock and Conant meet again Thursday, in Swanzey this time, at 4 p.m.