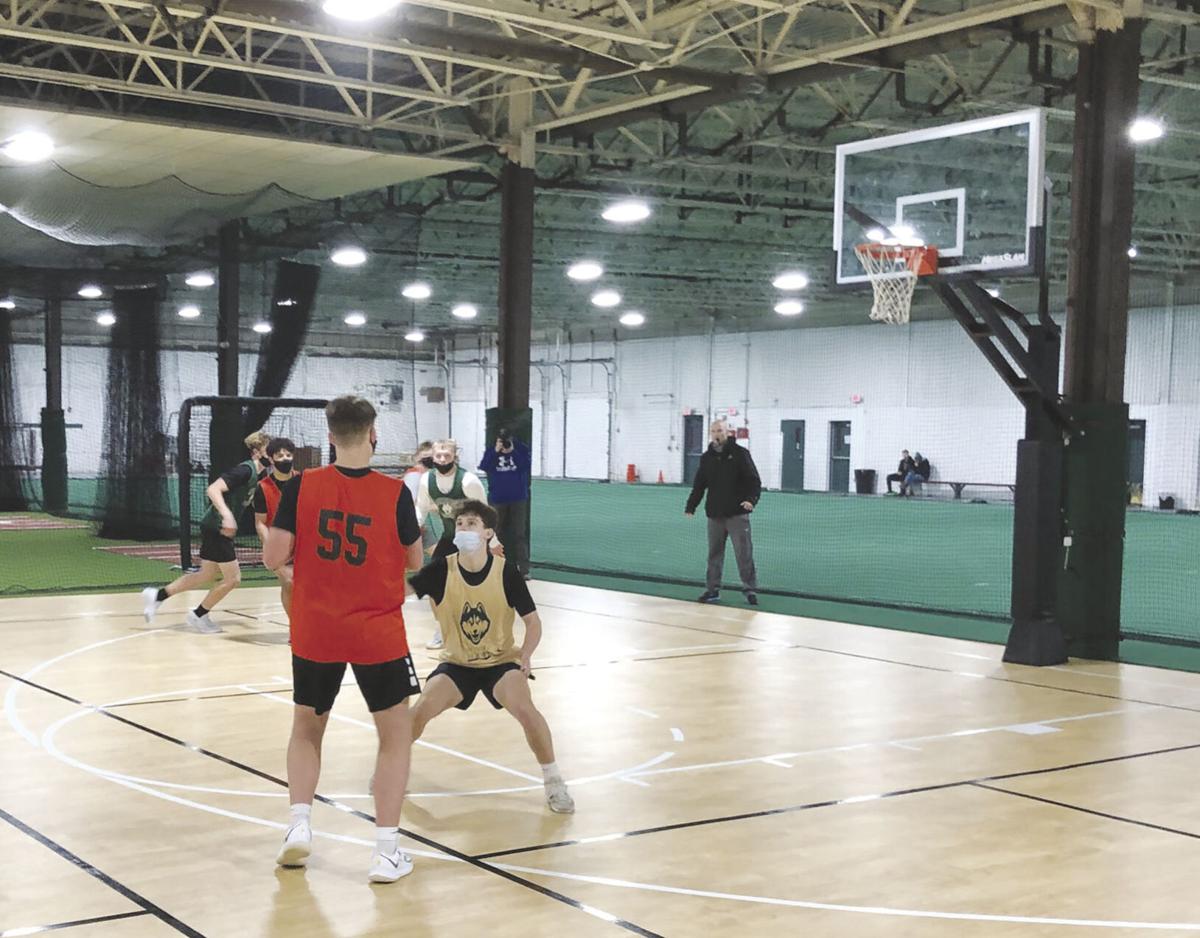 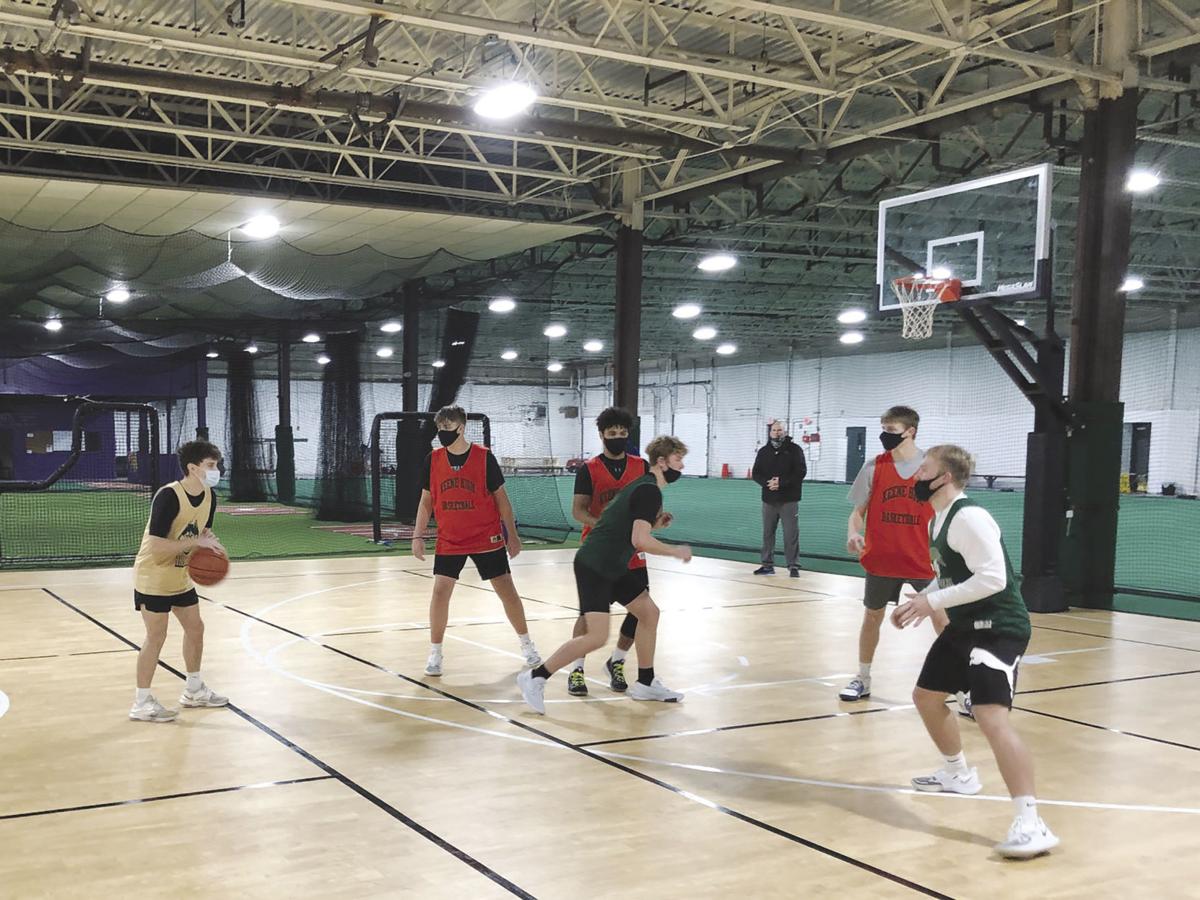 Monadnock senior Tyler Hebert, left, scans the court during Saturday’s championship game in the high school boys division of The Fieldhouse 3-on-3 Tournament.

Monadnock senior Tyler Hebert, left, scans the court during Saturday’s championship game in the high school boys division of The Fieldhouse 3-on-3 Tournament.

SWANZEY — The status of high school basketball is still up in the air. But, at least for one day, competition was back.

On Saturday, some local student athletes took part in a 3-on-3 basketball tournament hosted by The Fieldhouse at Homestead Mills in Swanzey.

“The kids want to play games and they want to have competition,” Fennell said. “It was an opportunity to have some fun and compete, so it was the best of both worlds.”

The one-day tournament gave the student athletes an opportunity to compete in full-speed basketball for the first time in almost a year, since several summer leagues were canceled due to COVID.

“It was really nice just to get back out there and play against other local kids,” said Keene senior Alex Charles, whose team earned second place in the tournament. “It was good competition. Every team was good.”

Charles was joined by two of his teammates, senior Christian Oxendine and sophomore Lucas Malay, to make up the team, “Can’t Dunk.”

This is Malay’s first year on the varsity team and he said the tournament helped his relationship with his teammates that will carry over to high school competition.

“They’re both really good role models,” Malay said of the seniors. “It really helped me mentally with the game.”

Seniors Jake Kidney and Tyler Hebert represented Monadnock in the tournament. Their team, “The DAs,” won the contest.

“It was just a great opportunity,” Kidney said. “We were really excited to get out there and play since we haven’t really played since whenever our season ended.”

Oxendine agreed that the tournament was a refreshing change to what has been a difficult season so far. He didn’t have the opportunity to play in AAU Basketball this summer, and with Keene’s school board recently deciding to suspend winter sports competition, there is no guarantee he’ll even have a chance to play competitive basketball in his final year at Keene.

“When COVID first hit, it was really hard,” Oxendine said. “Being able to get back in the gym and playing against guys all around the same level, it was a great feeling.”

All COVID protocols were in place during the tournament, Fennell said, including athletes wearing masks while they were competing on the court.

Wearing a mask during competition is likely something the athletes will have to get used to. Chances are all school protocols will require masks when competition begins in January.

It’s an adjustment, but not as much as some people might think.

“You can definitely play in a mask,” Malay said. “There’s nothing wrong with wearing it.”

“It’s really just been a developing thing,” Oxendine said. “Your lungs are just building up the capacity to handle it.

“It’s definitely challenging, but it’s one of those things where if you really want to play and you’re willing to do whatever it takes to play, you’ll figure out a way,” Oxendine added. “And that’s what we’ve been trying to do together.”

Kidney agreed that it’s just something to get used to.

“It’s a little bit of a challenge, but at the same time, you’re going to be playing with that in your school season so it was good practice,” Kidney said.

Because of the success of this weekend’s tournament, more 3-on-3 tournaments could be coming to the Fieldhouse, Fennell said.

“They just enjoyed getting out, having fun and competing,” Fennell said. “It was a fun time.”

Monadnock has the green light to compete against other schools in January. Keene, on the other hand, suspended competition until in-person learning restarts.