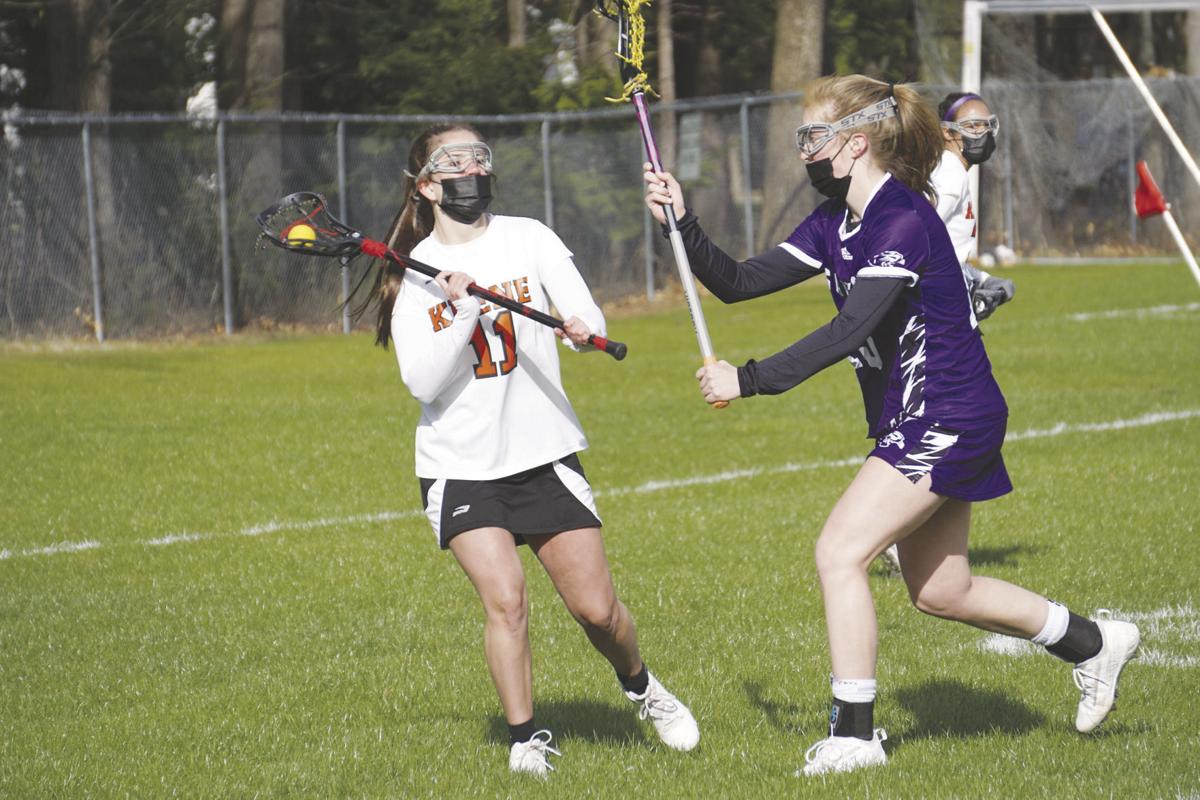 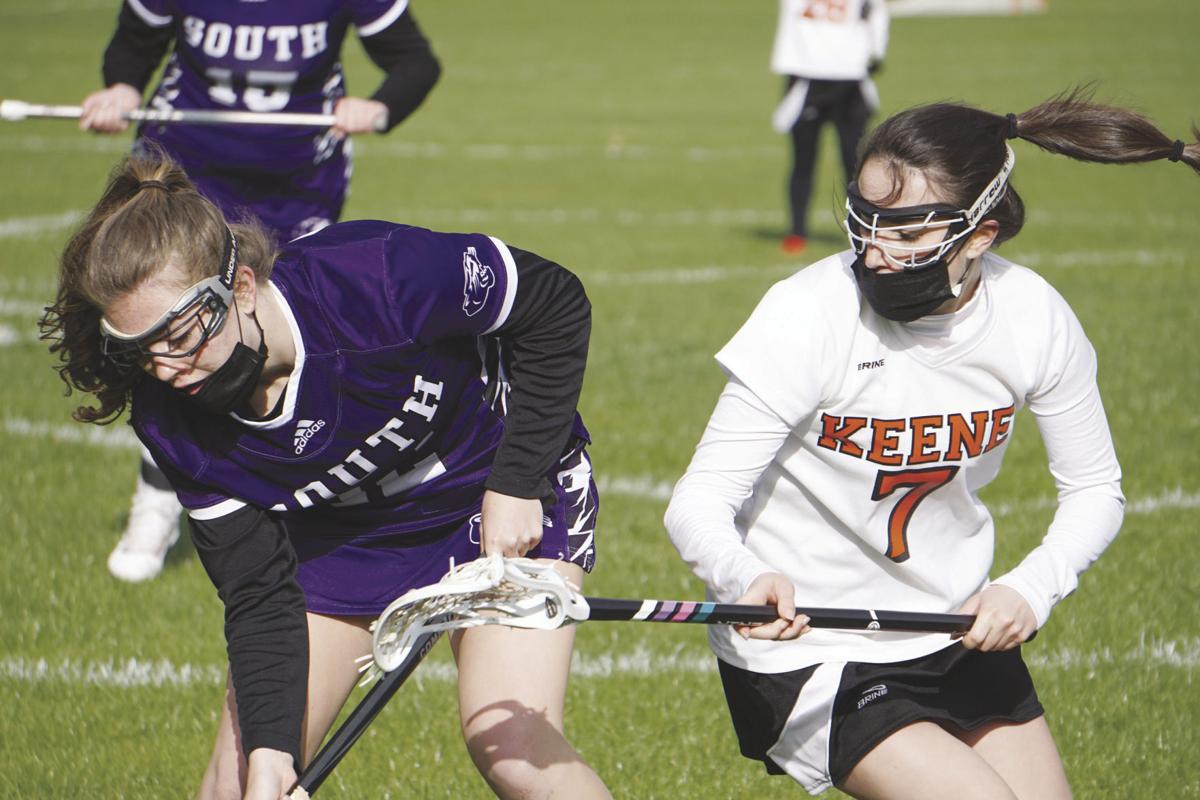 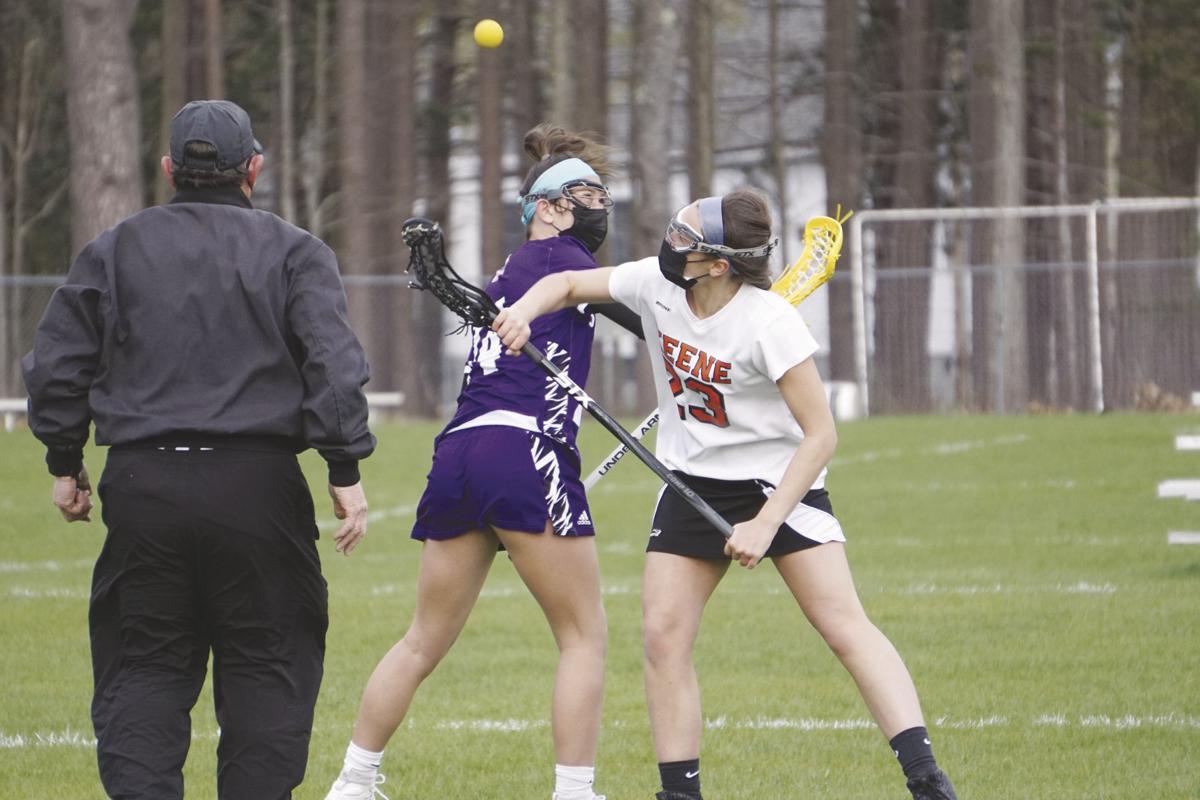 On a cold and windy Thursday spring afternoon, the Keene High girls lacrosse team dropped its third game of the season, 21-7, to Nashua South in Keene.

Senior Kristin Leslie put the offense on her shoulders for much of the game, scoring five goals in the loss. Classmate Jaden Greenwald scored the other two goals, coming just 20 seconds apart late in the first half.

Despite the loss, first-year head coach Sara Alderfer saw a stark difference in her team’s gameplay compared to Tuesday’s 17-1 loss to this same Nashua South team.

“I’m incredibly impressed with how much they stepped up from when we played [Nashua South] on Tuesday,” Alderfer said. “We got to chat about what went well and what didn’t go well on Tuesday, and they certainly made some nice adjustments. The team is really starting to meld a little bit more.”

Alderfer said the team is playing with more confidence, which led to its most productive offensive game of the season so far, and Leslie was the key on Thursday.

“I definitely think that we connected more as a team than we did previously in the season,” Leslie said. “We’ve had a lot of tough losses, but this loss wasn’t as tough because it was more competitive than what we have played before.”

Draw controls were also a focal point on Thursday. The Blackbirds (0-3) won a handful of draw controls to start the game, leading to two quick goals from Leslie to give Keene an early 2-0 lead.

“We did a lot more on the draw control — Nelly [Tattersall] was huge on the draws,” Alderfer said. “That helps a lot in the midfield, which is where we struggle the most.”

But after Leslie’s first two goals, Nashua South exploded for seven in a row to take the lead, which held for the rest of the game.

There are positive takeaways from Thursday’s loss but, of course, there’s still room for improvement, Alderfer emphasized, specifically with covering the midfield. The key is to build off the positive aspects.

“I know that in a week or two we’re going to start getting those wins,” Alderfer said. “Because [the team is] coming together.”

Senior Izzy Sutton recorded 15 saves in net for the Blackbirds, while classmate Mia Hogancamp came in to play a majority of the second half, recording three saves of her own.

Thursday also marked Senior Day for the Blackbirds, despite it being only the third game of the season. In a season that can be shut down in the blink of an eye, the team decided to celebrate its 12 seniors as early as possible.

“We’ve all been playing lacrosse together since we were in middle school or even younger,” said Jaden Greenwald. “So, to celebrate together as seniors is just a great feeling. It was a really fun game.”

Although it’s her first year as head coach, Alderfer has been around the team in years past as the strength and conditioning coach at Keene High, so she’s had plenty of opportunity to work with this senior class.

“I’ve known most of these girls since they were in middle school,” Alderfer said. “They’re really special to me. I’ll always remember them because I’ve known them since they’ve been so young and I’ve seen them grow up.

“This is a really strong class for Keene lacrosse,” Alderfer added. “They’re going to really leave their mark and I think they are setting a good tone for the girls that are coming up.”

The Blackbirds are back in action Saturday when they host Concord at 11 a.m. at Scripture Field.