Free
Get Started
You are the owner of this article.
Edit Article Add New Article
You have permission to edit this article.
Edit
Home
News
Sports
Opinion
Calendar
Obituaries
Hub
Publications
Classifieds
Jobs
TicketELF
1 of 5 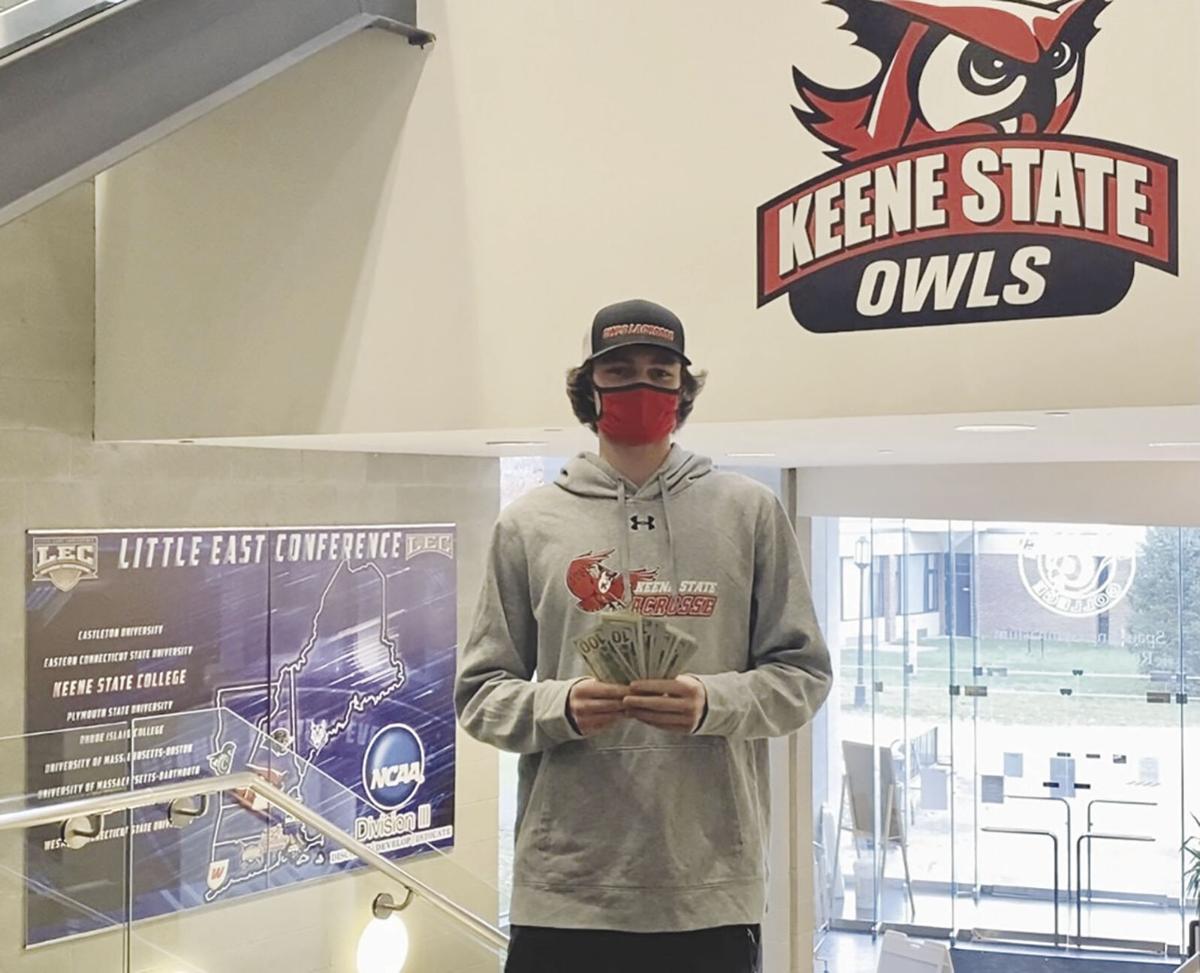 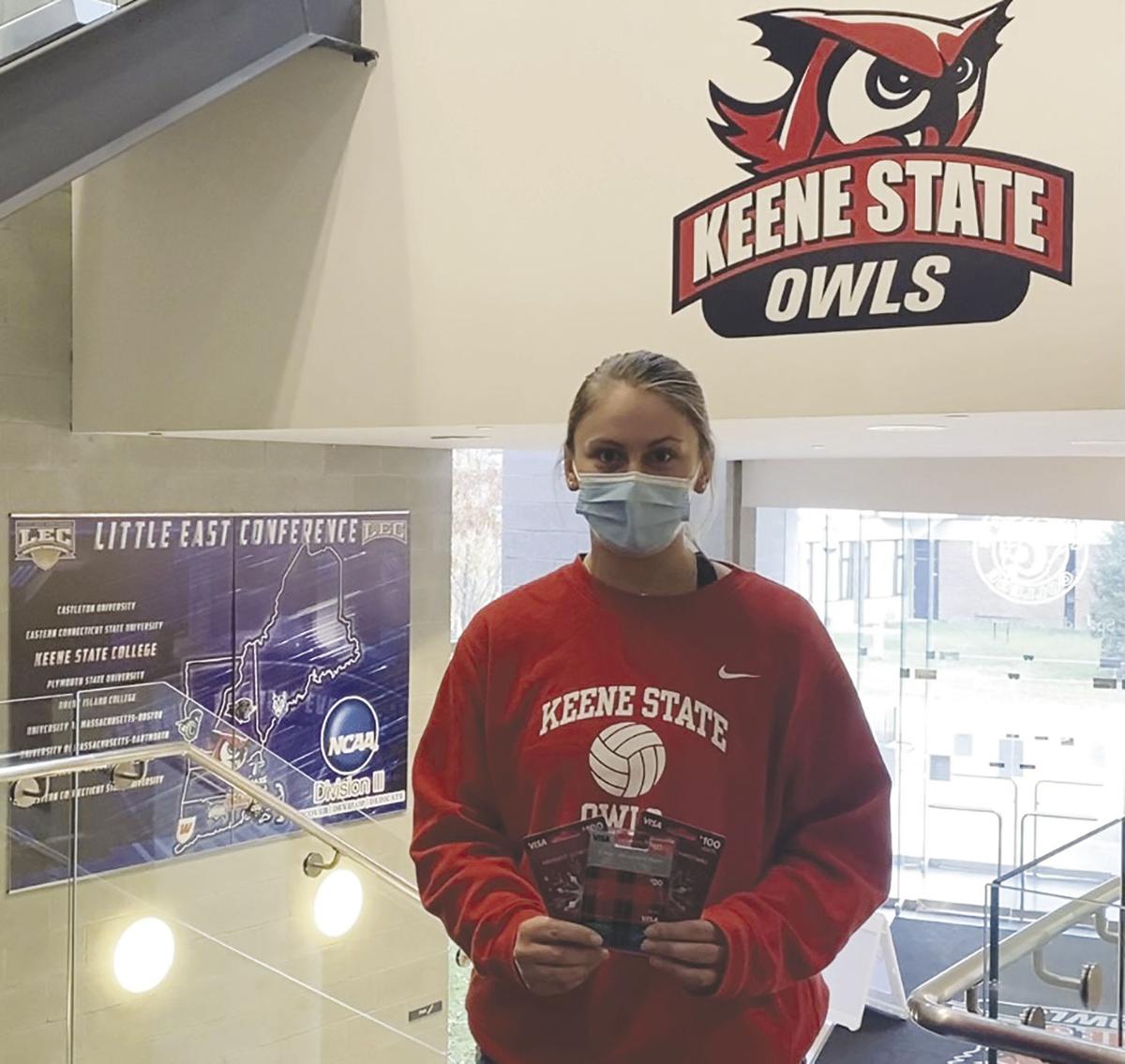 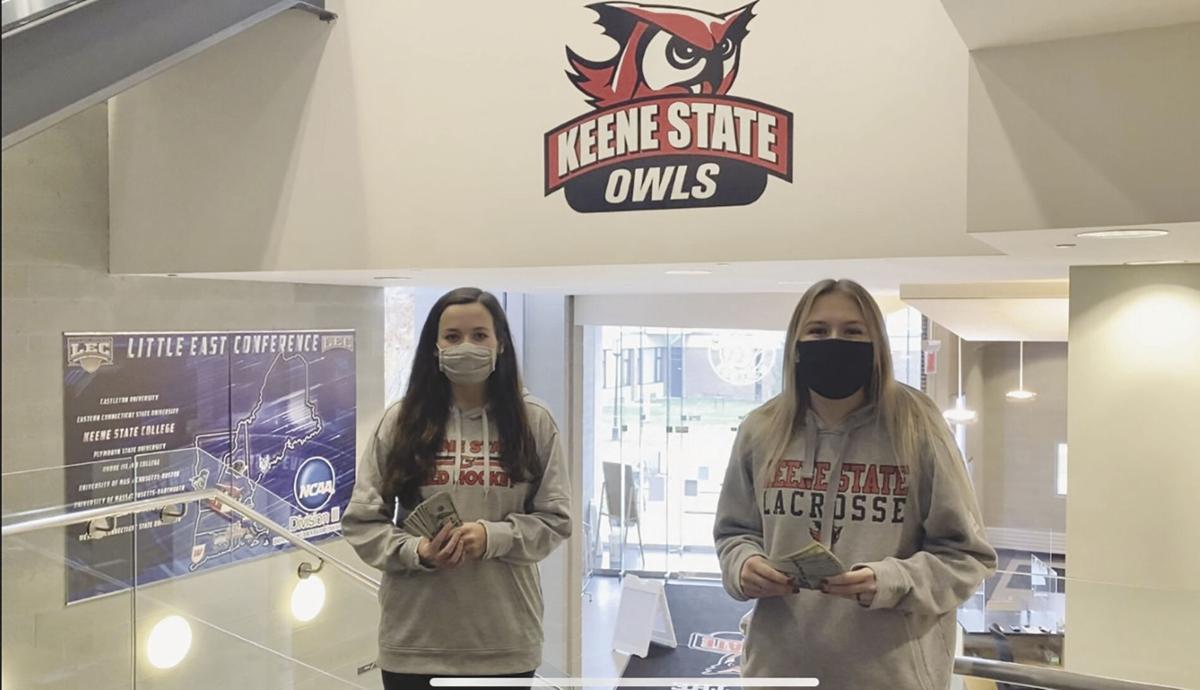 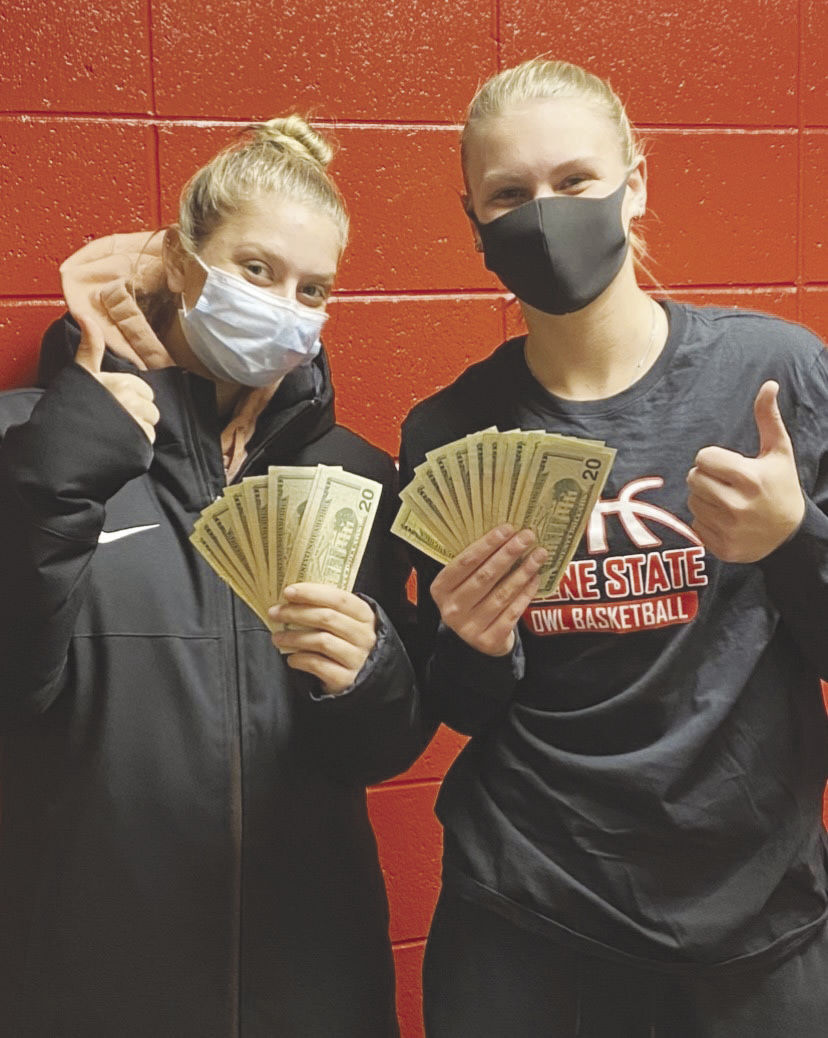 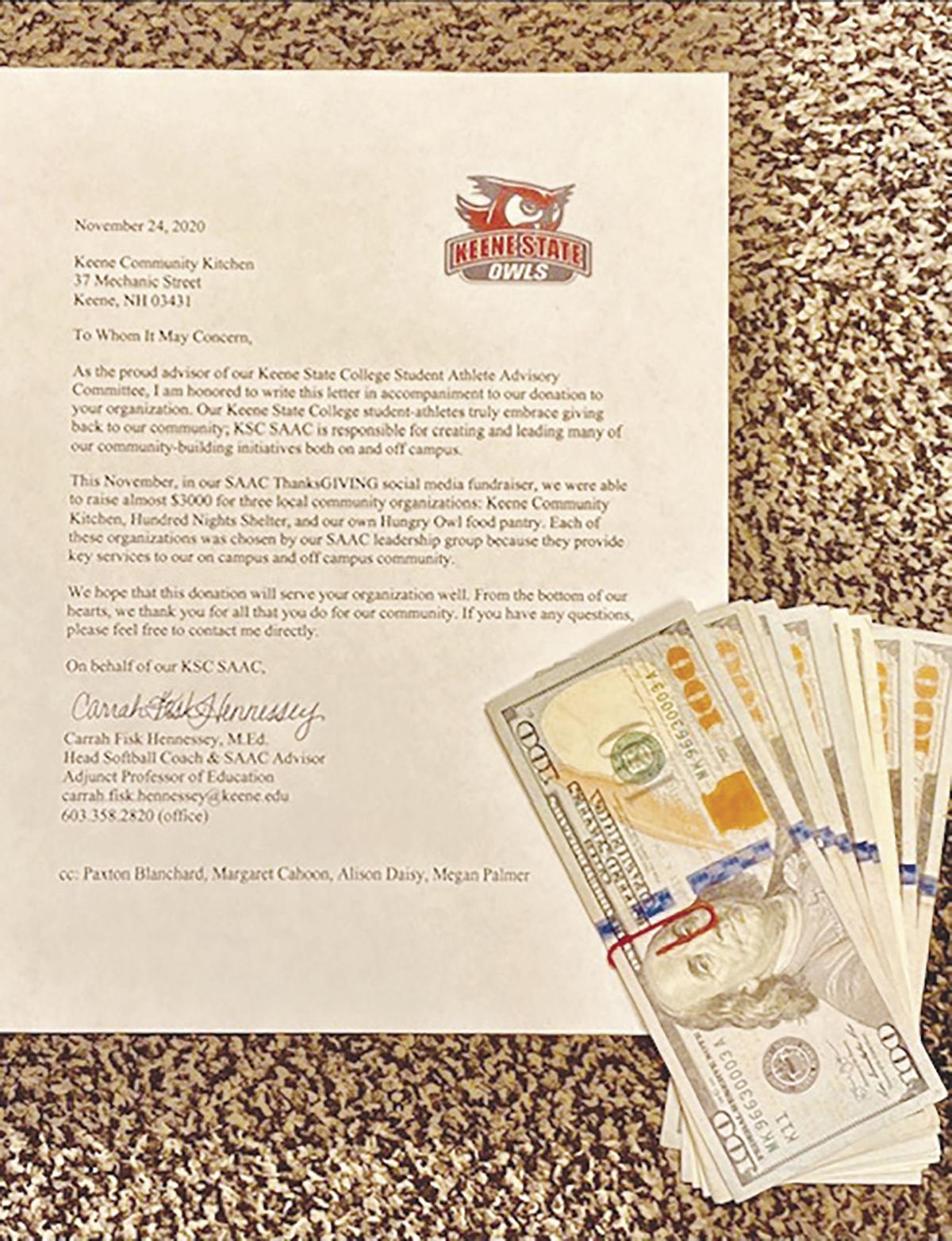 The letter and donation sent to the three local organizations that were picked to benefit from the fundraiser.

The letter and donation sent to the three local organizations that were picked to benefit from the fundraiser.

To celebrate the unofficial “month of thanks” (November, of course) the Keene State College Student Athlete Advisory Committee, or SAAC, ran a two-day fundraiser Nov. 16-18 to support the Keene Community Kitchen, the Keene Hundred Nights Shelter and The Hungry Owl, KSC’s on campus food pantry.

In those two days, they raised $3,022, which was split evenly between the local organizations.

SAAC typically spends their November volunteering with the Special Olympics of New Hampshire, helping with their annual bowling tournament. The COVID pandemic took that opportunity away this year, but the student-led organization was still motivated to make an impact in the community, so they ran a fully virtual, social media bingo board fundraiser.

“It was just a giant team effort,” said senior Paxton Blanchard, president of SAAC and a member of the men’s lacrosse team. “Everyone on SAAC came together.”

More than 80 percent of the teams on campus participated in the fundraiser, said SAAC advisor Carrah Fisk Hennessey.

“It’s incredible,” Fisk Hennessey said. “We wanted to share our gratitude and our thankfulness for our community, not just Keene State, but the community of Keene, for really supporting our efforts to be on campus … this fall with everything going on.”

But this wasn’t the first bingo board fundraiser that SAAC put on.

The original idea came up back in March, when the pandemic just began, and SAAC raised about $2,000 for Special Olympics of New Hampshire.

That’s about what SAAC was expecting to make in last month’s fundraiser as well, said senior Megan Palmer, a member of SAAC and the volleyball team.

“When we heard $3,000, it was just crazy,” Palmer said. “I remember seeing the email … and even seeing how much my team raised, adding that all up and telling them — everyone was so excited.”

Palmer is also a student leader at The Hungry Owl, one of the three local organizations that benefited from the fundraiser. Having that connection gave Palmer a different perspective on the fundraiser.

“It just brought it all together for me, too, because I do a lot of work with [The Hungry Owl],” Palmer said. “It was a really nice feeling knowing that that came from athletics.

“Fundraising in the past, you never really saw where the money went,” she added. “If you’re not a part of it, you don’t know where it goes. I think seeing that, as leaders, we got to decide what happens to that money and how it will benefit us — that definitely motivated me at this fundraiser.”

Palmer said the money will be used to expand The Hungry Owl’s initiative so they will be able to serve more students around campus.

Fisk Hennessey added that all three organizations have reached out to her to give their thanks to the students for the help, especially in a time when even the smallest act of giving can go a long way.

“They’re so thankful that a group of student athletes is this thoughtful, and it’s a very welcome bonus to the holiday season, especially this year,” Fisk Hennessey said.

And, of course, the added competition between the teams to see who can raise the most money always helps.

“They’re excited to compete in any way they possibly can,” Fisk Hennessey said. “They want to be the team that gives the most, so any time we can attach that to a community endeavor, it’s going to be a win-win.

“I know they feel like a greater part of our Keene community … by doing things like this … and I know that there’s a genuine feeling of appreciation for the Keene community welcoming us back, especially this fall,” she added.

“The fact that we were able to raise this money and donate as college students really goes to show the character of everyone at the college and how close we are to the community and how much we care about the community,” Blanchard said.

It also goes to show that there’s more to student athletes than just their performances on the field.

“It just makes me proud to be a Keene State athlete and that people are seeing us represent something other than playing our sport and noticing that we are doing more for the community than just being at college and being an athlete,” Palmer said.

“With these super unprecedented times, you just don’t know what’s going to happen, but to be able to do something good and try and make someone’s life a little bit easier, it’s pretty special,” Blanchard said.