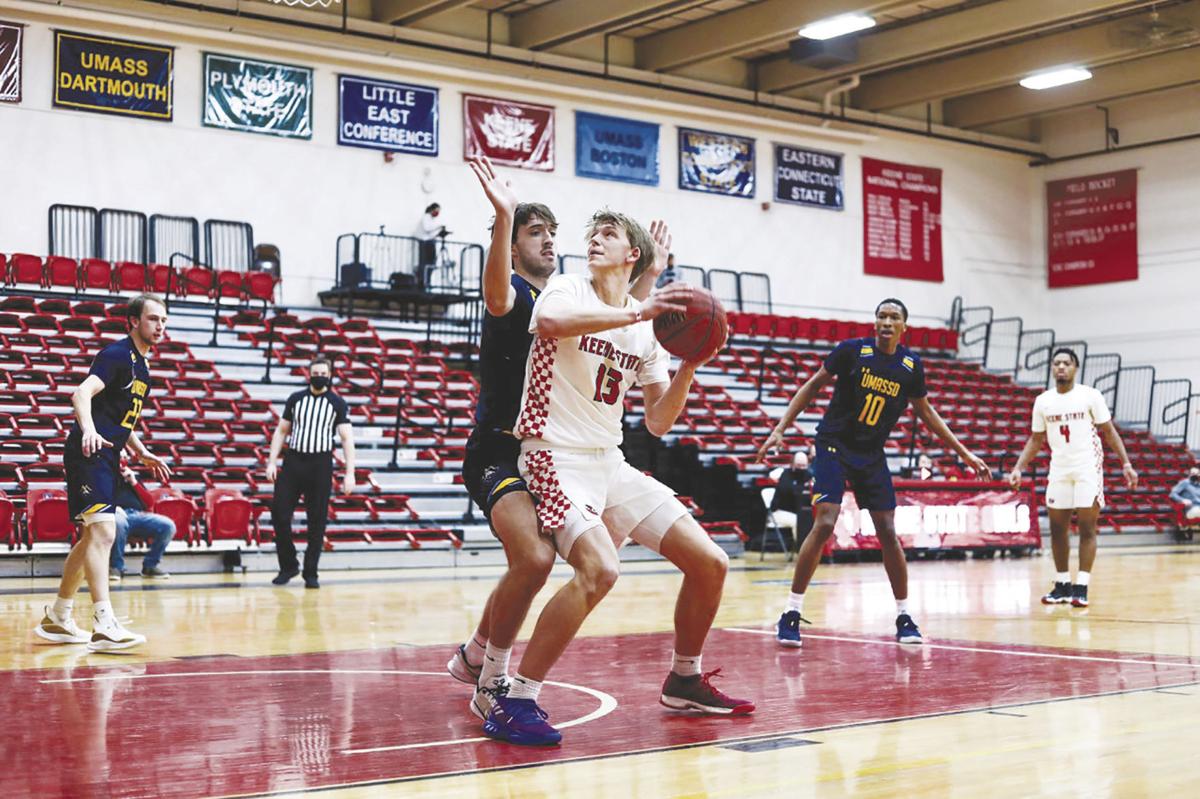 Sophomore Jeff Hunter (13) looks to the basket in the first half of Keene State’s matchup against UMass Dartmouth at Spaulding Gym on Sunday. Hunter recorded another double-double. 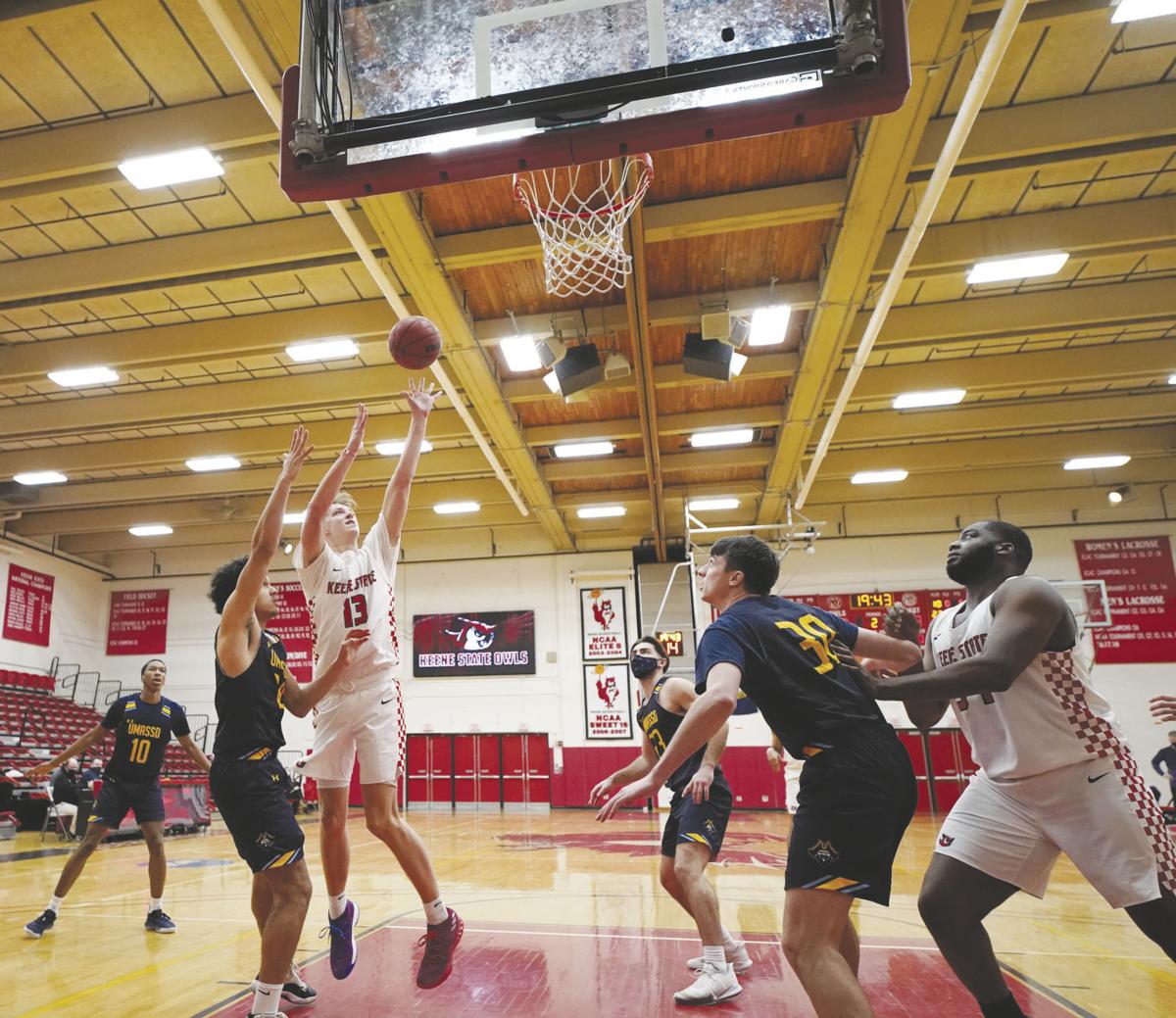 Sophomore Jeff Hunter (13) puts up a shot against UMass Dartmouth in Sunday's game at Spaulding Gymnasium.

Sophomore Jeff Hunter (13) looks to the basket in the first half of Keene State’s matchup against UMass Dartmouth at Spaulding Gym on Sunday. Hunter recorded another double-double.

Sophomore Jeff Hunter (13) puts up a shot against UMass Dartmouth in Sunday's game at Spaulding Gymnasium.

As the saying goes, all good things must come to an end.

Sophomore Jeff Hunter (26 points, 14 rebounds) recorded another double-double, but the Owls (4-1) couldn’t seem to find any rhythm on either side of the court in the first half, which gave the Corsairs (5-1) the opportunity to take an early lead, and they never looked back.

“We’re a really young team, so things like this are going to happen,” Hunter said. “We’re going to lose games; it’s just about learning from them.”

In the blink of an eye, UMass Dartmouth was up by 10, using strong defense and precise three-point shooting to build up and keep that lead. The Corsairs led by as many as 14 points in the first half.

At the final media timeout of the half, UMass Dartmouth was shooting 50 percent from the field. The Owls were at 29 percent.

Senior James Anozie, who finished with 15 points in just 17 minutes, found the hot hand in the final minutes of the first half, scoring five quick points to get the Owls within eight after 20 minutes.

Anozie kept it going after the halftime break, scoring four more points in the opening minutes of the second half.

“James has had a lot of success with us, but I think this is the best he’s overall played with us,” said Keene State head coach Ryan Cain. “His ability to move his feet, his ability to play hard, has just elevated extremely.”

The Owls started to find their shot in the second half, but UMass Dartmouth seemed to always have an answer, and it was tough for Keene State to make up any ground.

Hunter, who added four blocks to his stat line, was a strong under-the-basket presence for Keene State. His defensive rebounds and blocks directly led to more scoring opportunities on the other end.

“I’ve made a big step mentally in my confidence,” Hunter said. “And people are getting me the ball where I should be getting the ball. But, at the end of the day, none of that meant anything since we lost.”

Down 74-59 midway through the second half, Keene State freshman Mason Jean Baptiste, who finished with 10 points and five rebounds, hurt his ankle on a defensive play and immediately fell to the ground in pain. He could not get off the court on his own power.

Cain said after the game that there was no update on Jean Baptiste’s status yet, but, “He’s a tough kid.”

UMass Dartmouth didn’t miss a beat after the injury timeout, extending its lead to 19, the largest lead of the game.

The Owls finished on a 16-8 run down the stretch, but it wasn’t enough.

With the loss, Keene State falls to second in the Little East Conference standings, a half-game behind UMass Dartmouth for the conference lead, with just under three weeks left in the regular season.

It was the second game in a weekend home-and-home series between the two teams. The Owls came out on top in the first game on Saturday, 68-67.

Keene State now has a nine-day break before its next contest.

“I’m not really worried about the conditioning for the nine-day stretch with no game,” Hunter said, adding that the team scrimmages a lot in practice to stay in game shape physically. “It’s more about mentally preparing for our next game and knowing that on any given day any team can win.”

But Cain said, with classes starting up this week, the break could be a good thing for the student-athletes.

“From that standpoint, it may be nice to have a little bit of a break so they can focus on their academics and settle back in when it comes to school,” Cain said.

The Owls are off until Feb. 24 when they visit Eastern Connecticut at 4 p.m. Keene State won the first matchup this season, 85-75.