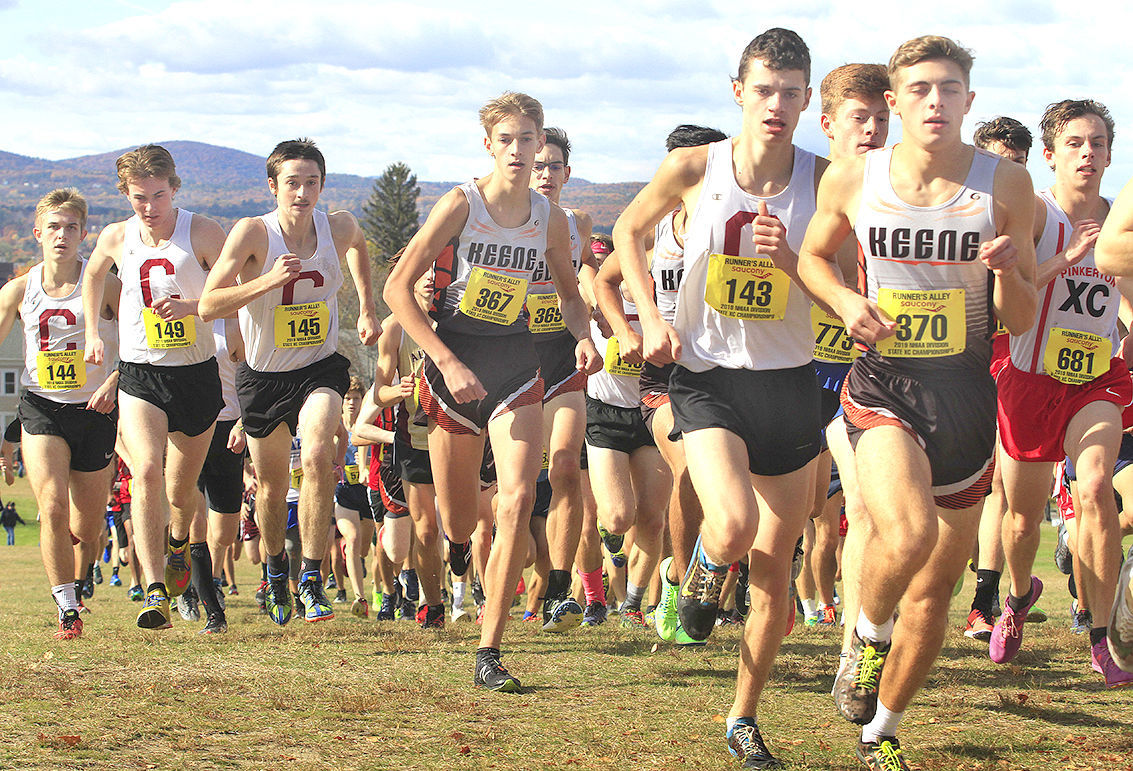 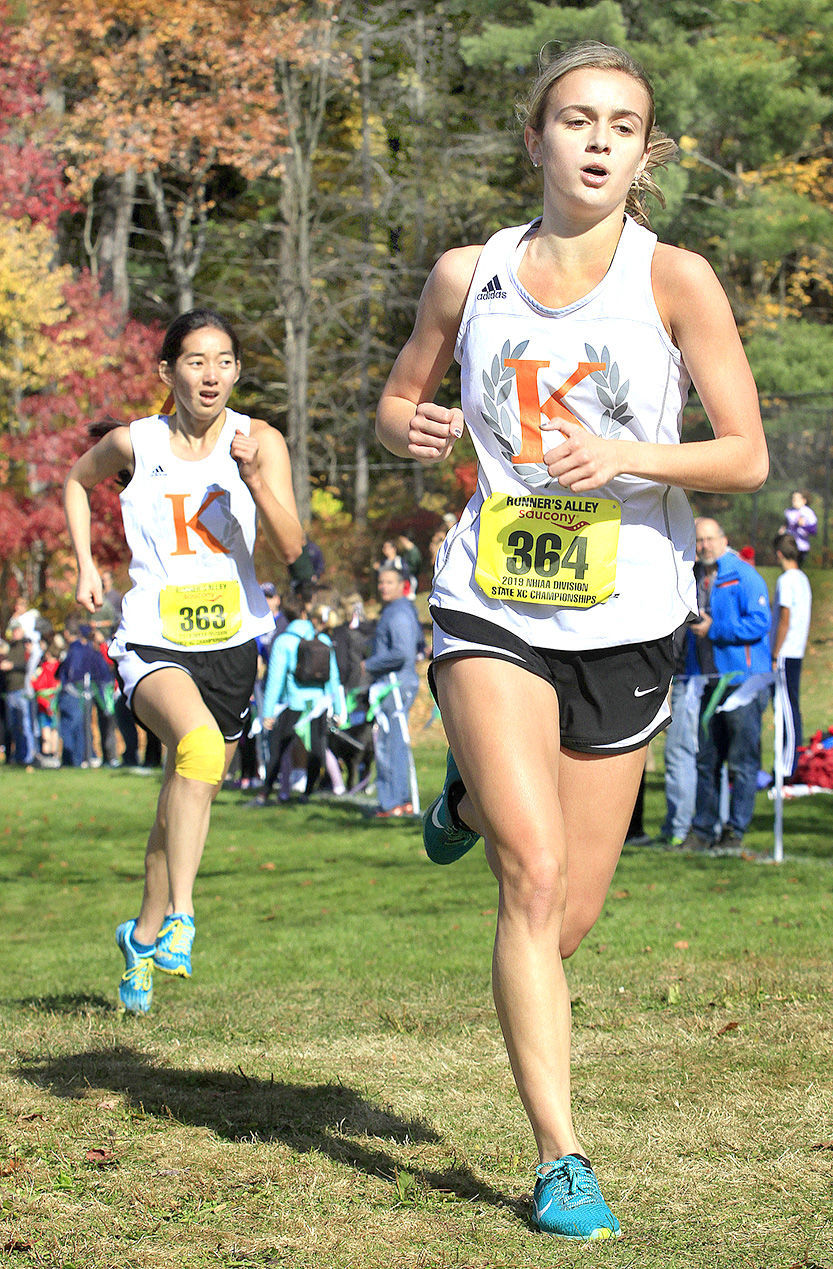 Keene High School’s Hannah Shepard, right, is just short of the finish line with teammate Mikayla Randall close behind during the cross-country state meet at Derryfield Park in Manchester on Saturday. The duo finished 10th and 11th to lead the team to a fourth-place Division I placement. 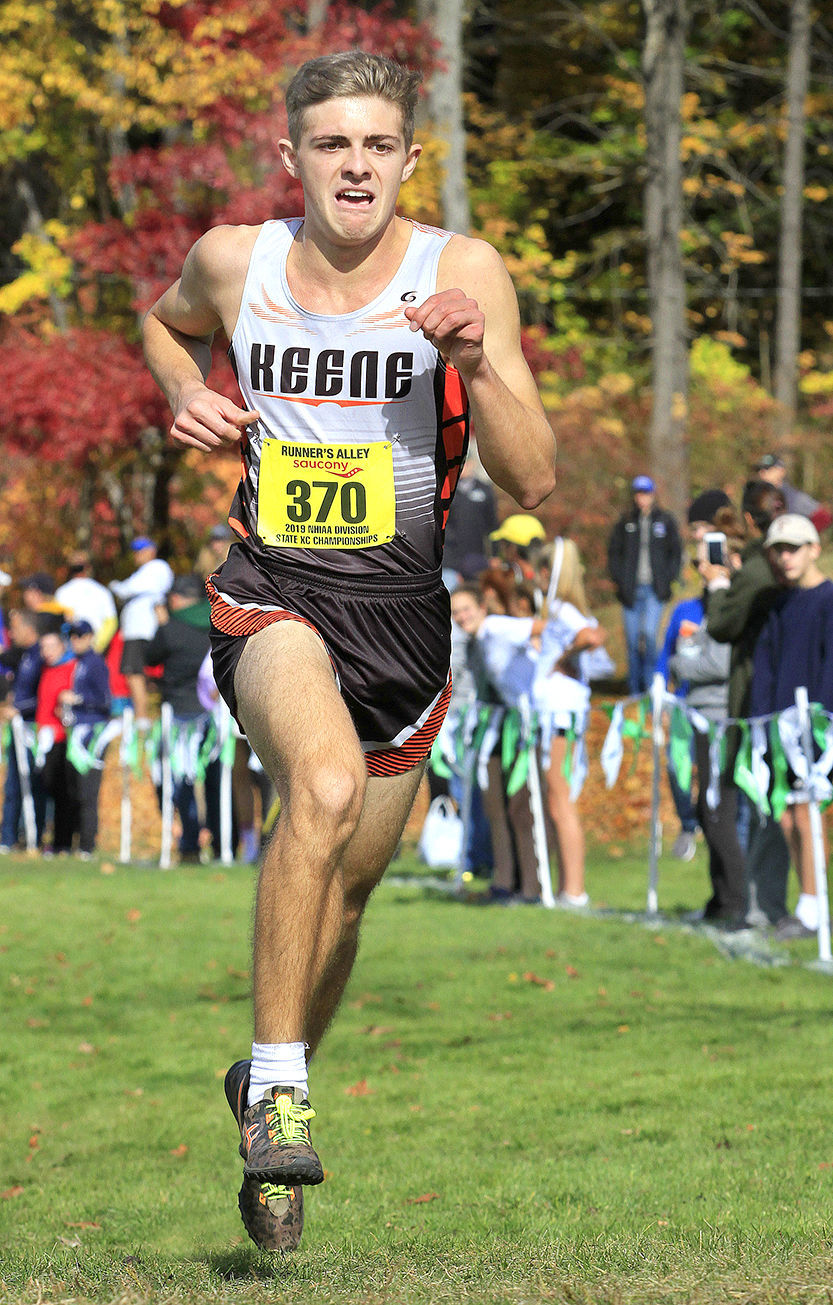 Keene High’s Jake Velazquez, shown here a week ago at the Division I Meet, added State Meet of Champions winner to his resume Saturday.

Keene High School’s Hannah Shepard, right, is just short of the finish line with teammate Mikayla Randall close behind during the cross-country state meet at Derryfield Park in Manchester on Saturday. The duo finished 10th and 11th to lead the team to a fourth-place Division I placement.

Keene High’s Jake Velazquez, shown here a week ago at the Division I Meet, added State Meet of Champions winner to his resume Saturday.

MANCHESTER — The pivotal moment behind Jake Velazquez’s state championship victory came when no one was watching.

The Keene High School senior was unable to finish the title race his sophomore year after picking up a hip-flexor injury midway through, and rallied for a third-place performance last year after taking a tumble in the mud.

But this year, in helping his team to a runner-up finish and a Meet of Champions berth, Velazquez confronted the tight turn where he took that fateful spill on the back stretch of the same course in Manchester’s Derryfield Park.

“Once I passed that corner, I knew I had it,” Velazquez said after catching his breath by the winners tent.

By the time Velazquez emerged on the open slope of the course in front of the crowd, he was so far ahead of his opponents that one would be forgiven to believe the future UMass-Lowell student got a head start.

Sprinting past the finish line in 15 minutes and 32 seconds, Velasquez beat the runner-up from Nashua North High School by a healthy 14 seconds.

Under a minute later, Keene sophomore Torin Kindopp clinched a fifth-place finish, snapping up a key spot for a Blackbirds squad hoping to surpass their second-place finish from last year.

It was not to be, however, with Concord High School packing five of its runners in the top 25 for the Division I boys title race.

(Team victories are awarded by adding up the top five performances from each team, with the lowest score winning.)

“We were second last year, and we had hoped to improve upon that,” Keene boys’ coach David Goldsmith said. “And we were obviously 16 points short, so — disappointing.”

Goldsmith, in his 37th season with the team, said he was happy for Velazquez, particularly after overcoming the mishaps of prior years that had become “part of Jake folklore.”

Velazquez said runs up Mount Monadnock and an overly-ambitious 18-mile trot along the Monadnock-Sunapee Greenway over the summer were key to his preparation, as well as listening to the song “Ashes of the Dawn” by Dragonforce on his speed metal playlist.

He also credited Olive Garden, in part, for his victory, lamenting the closure of the chain’s Keene location in 2015. Since then, to keep up the good mojo with runners who used to eat there with upperclassmen, Velazquez said, he and some of the guys have checked out the Manchester and Concord locations.

Nevertheless, they earned a bid to the Meet of Champions.

“Normally when your number two runner is hurt, it greatly diminishes your chances to do well,” noted coach Bill Derry. “But our girls rose to the challenge and managed to run strong despite adversity.”

Hoping for a top-three team finish since the beginning of the season, the team fell just shy, in fourth place, with sophomore Hannah Shepard and senior Mikayla Randall leading the way in 10th and 11th places, respectively.

Shepard and Randall both kept their average mile time under 6½ minutes on the hilly course.

In addition to the two Keene squads, the ConVal and Conant boys teams also earned berths to the Meet of Champions next weekend in Nashua, extending their seasons in Divisions II and III, respectively.

But the Monadnock’s boys and girls teams failed to extend their campaigns. Monadnock junior Tyler Hebert did finish third in the boys Division III race, punching his ticket to the Meet of Champions. His teammate and fellow junior, Delaney Swanson, finished ninth in her race, also getting a berth to the next round.

Lance Flamino, coach of the ConVal boys and girls teams, said he was proud of his runners for racking up personal records on the course, the culmination of 18 weeks of training.

“I’m usually not giving a super hyped-up pump-up speech,” Flamino said. “I remind them of all of the hard work they’ve done, and that they’re fit, they’re ready, they’re rested.”

“And just assuring them that they’ve done the work,” Mary Goldthwaite-Gagne, ConVal’s assistant coach, chimed in.

Velazquez added that even his competitors deserved some credit on the day.

“That was a well-fought race by Joe Curran [the runner-up from Nashua North],” Velazquez said. “... I don’t think I could have done as fast a time without him pushing me, so props to him.”