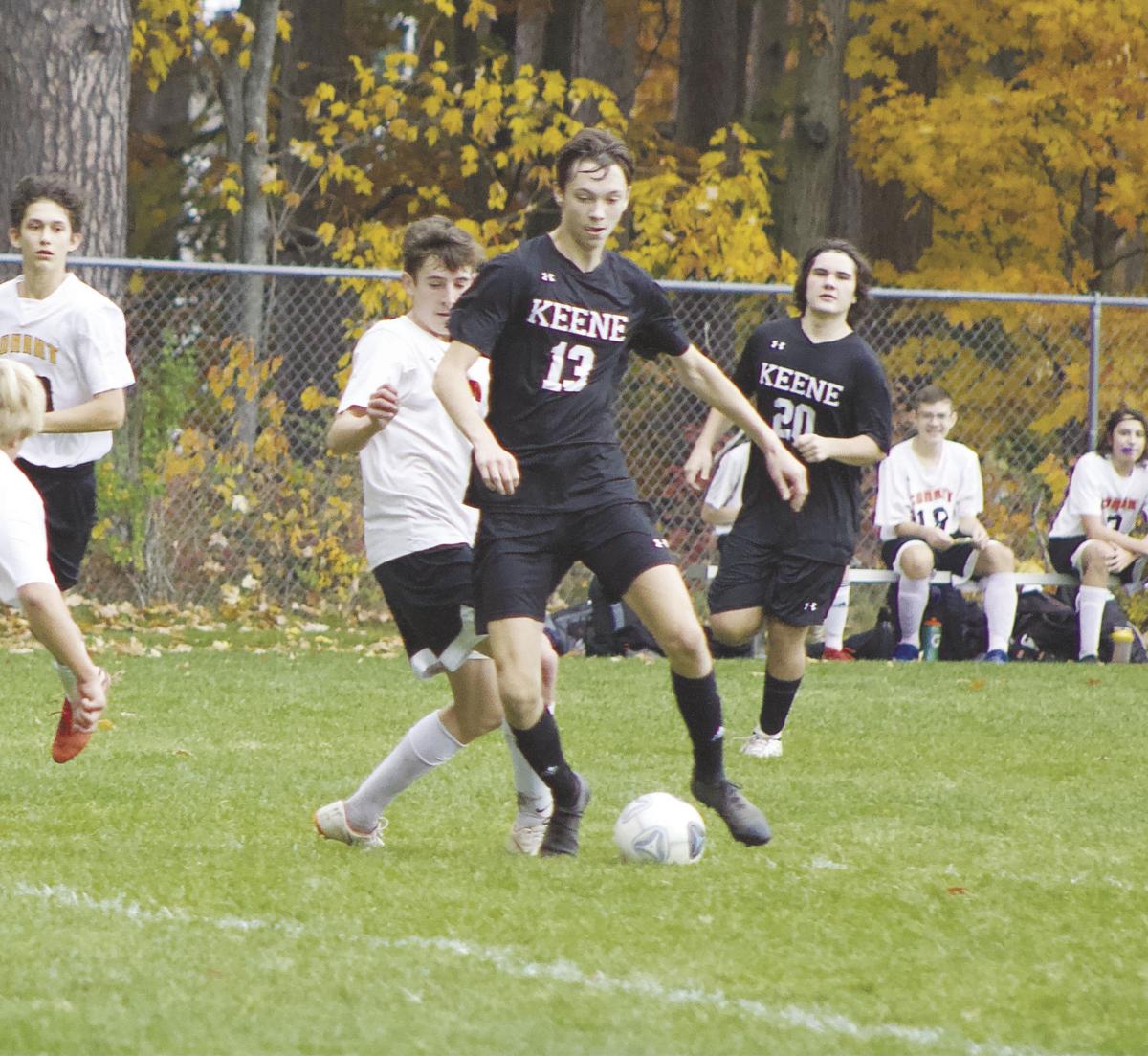 On right, Jonas O’Mara, left, works to improve a house in Puerto Rico in February. Above, O’Mara, 13, dribbles against Conant. 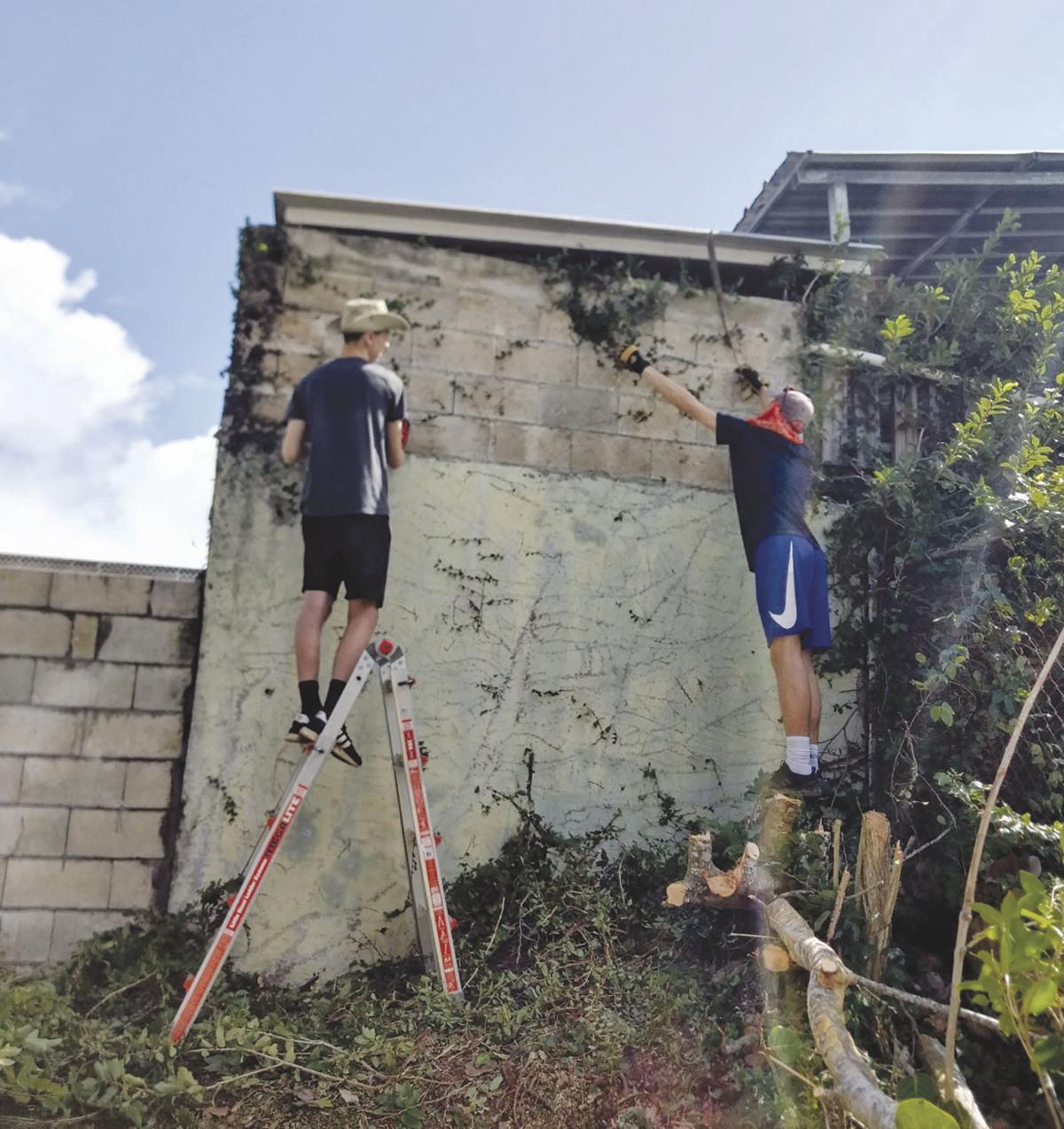 Keene High senior Jonas O’Mara, left, works to improve a house in Puerto Rico as part of his missions trip with Interact in February.

On right, Jonas O’Mara, left, works to improve a house in Puerto Rico in February. Above, O’Mara, 13, dribbles against Conant.

Keene High senior Jonas O’Mara, left, works to improve a house in Puerto Rico as part of his missions trip with Interact in February.

A four-year starter on the boys soccer team, O’Mara shined on the pitch this fall, scoring six goals and recording six assists, in an unusual, limited season.

“Jonas has the ability and vision to be the best player on the field on both teams, and he kind of commands that expectation from other players too,” said Keene head coach Ben Pierce. “I think players understood that … he was a linking player in the midfield. So, the players are looking to him to get the ball up field.”

And he did just that, even with his coach limiting his offensive production because, with Keene’s regional schedule, they were competing against schools in lower divisions.

Behind O’Mara, the team finished undefeated in the regular season, and was scheduled to face Concord High School in the first round of the NHIAA DI tournament before their season prematurely ended because of travel restrictions.

Regardless, O’Mara’s successful season earned him a spot on the All-State First Team.

“It’s nice to be recognized as one of the better players in New Hampshire but compared to missing playoffs — it kind of makes up for it, but not totally,” O’Mara said. “I wish our team could’ve been recognized.”

“That was a very attainable goal for him. I’m glad he reached it,” Pierce said. “These players had every excuse not to go as hard as they went … but these players … had goals in mind that they wanted to reach.

“Being an All-State player is a big deal,” Pierce added.

When O’Mara isn’t too busy scoring goals, he spends his free time improving himself off the field — or helping to improve others.

This past February, O’Mara was part of a group of roughly 30 local high schoolers to travel to Puerto Rico with the Interact Club and spending a week on a missions trip helping the locals recover from damages caused by natural disasters.

While on the trip, O’Mara and his group worked on home improvements as well as replanting trees in the area.

“I remember the last day, when we were finishing up the house, we were getting on the bus to leave and, right before that we had walked around the house, and it felt fulfilling to see the difference,” O’Mara said.

“Fulfilling” was the word that O’Mara used most when describing the trip to Puerto Rico. He hopes to go again this February, but the status of that trip is in question because of the pandemic.

To join Interact, students have to be nominated by their teachers and then are reviewed by the organization’s board of directors. O’Mara was nominated his freshman year, ran for a spot on the board of directors at the end of that year and has served in that role ever since.

“Being part of Interact — going to Puerto Rico and also just doing the events — it’s very fulfilling,” O’Mara said. “Without Interact, I wouldn’t have been exposed to all these opportunities to volunteer and go to these places and do community service.

“It’s helpful for me to have access to all these events,” O’Mara added. “I don’t think I’d be as involved as I am without Interact because I simply wouldn’t know about the things that we’re doing.”

O’Mara is also part of the National Honor Society, an organization recognizing students for their academic accomplishments.

As a senior, O’Mara has been full-steam-ahead on the college search. He said that his AP Environmental Science class that he took junior year inspired him to pursue the sciences in college.

“That was probably one of the best, if not the best, class I’ve taken in high school,” O’Mara said. “A lot of the opportunities — we had these enrichments where you had to get involved outside of class and it was for a grade, and, I don’t know, I just had a lot of fun with it.”

Science has been a big part of the on-going college search – although he’s not sure exactly which sciences he wants to pursue. He just knows that he wants the opportunity to do research or get involved outside in a larger way outside of just class.

He also hopes to pursue a Spanish program in college so he can study abroad in a Spanish-speaking country.

Soccer is going to take a back seat in college. O’Mara said academics will be his main focus at the next level.

But club soccer is not out of the question.

“I feel like club would be a way for me to have fun with it,” O’Mara said.

One way or another, O’Mara seems to be on a pathway to success — and people around him are already taking notice.