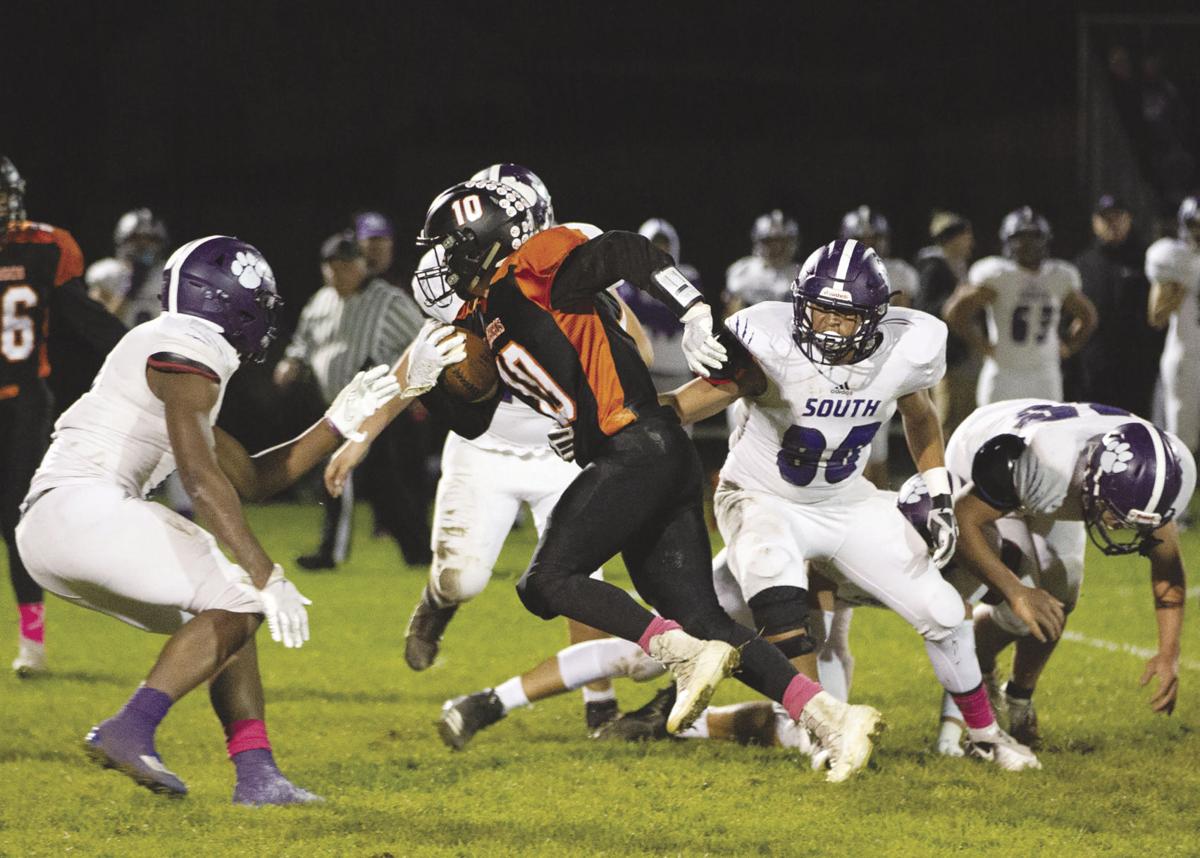 Senior Jarrod Rokes (10) of the Keene football team makes a run through Nashua South’s defense before getting tackled during their game at Alumni Field on Oct. 29. 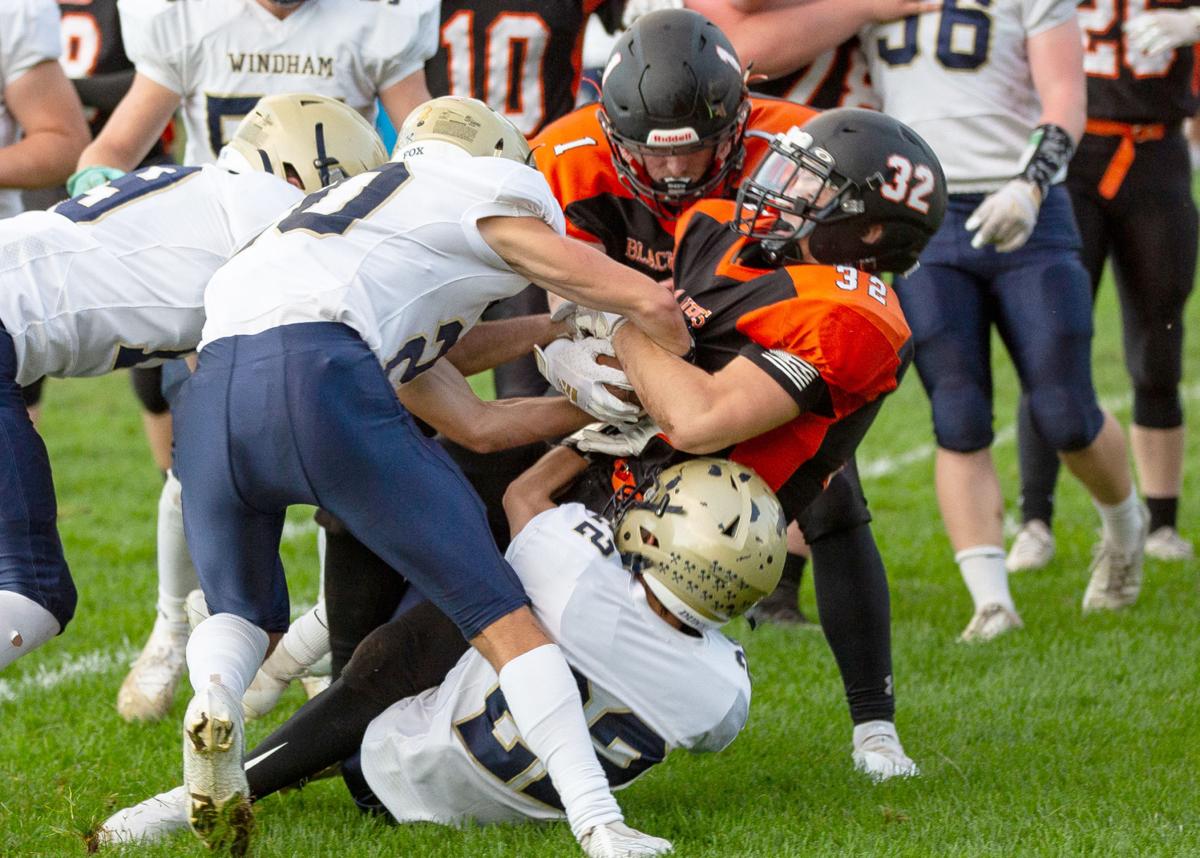 Senior Austin Morris (32) of Keene High is tackled by Windham senior Sam Dunham (22) and others in the first half of their game at Alumni Field on Sept. 24.

Senior Jarrod Rokes (10) of the Keene football team makes a run through Nashua South’s defense before getting tackled during their game at Alumni Field on Oct. 29.

Senior Austin Morris (32) of Keene High is tackled by Windham senior Sam Dunham (22) and others in the first half of their game at Alumni Field on Sept. 24.

Coming into the year, there weren’t too many people who predicted the Keene football team finishing with five wins.

It’s a program that’s been rebuilding for quite some time now — only winning six games since 2016 before this year — and undoubtedly took a step forward after this season.

Keene’s four losses? All against playoff teams that compete in Division I year in and year out. And most of those loses were within reach.

The Blackbirds finished at 5-4, second in the West division behind Bishop Guertin (7-2), just missing out on a playoff spot.

But — hey — Keene had a team that was in the playoff conversation late in the season, something that hasn’t happened in quite some time.

“We were relevant,” said third-year head coach Linwood Patnode. “We were playing meaningful games in October. That needs to stay. We need to continue to do that. It’s going to take a lot of work and it’s going to take some help from the community and from the administration.”

It was something even opposing head coaches noticed.

“The Keene kids are tough,” said Bishop Guertin head coach John Trisciani after BG’s 34-13 win over Keene in Week 1. “They’ve got some big boys. You could see at times how tough they were running the ball. A lot of respect for those guys.”

Patnode said he’s been “dying” to see that physicality in his teams since he got to Keene in 2019. Finally, he got it this year. Now, he says that physical mentality has to stick around.

“We’ve gotten over that hurdle a little bit,” Patnode said. “I know that the group coming in has a foothold on toughness. I have to think that will go a ways and help us stay relevant. That’s what I want around here is to be relevant and respected.”

Without a doubt, the Blackbirds relied on their running backs to move the ball down the field

Seniors Jarrod Rokes and Austin Morris commanded the backfield. Rokes finished with 1,193 rushing yards and 13 touchdowns, becoming the program’s first 1,000-yard rusher since Alex Parenteau ran for over 1,100 yards in 2013.

“It’s just all the boys,” Rokes said. “We put it all together. We practiced every week. Ever since freshman year we’ve been evolving together. It helped senior year. It came down to it.”

Morris finished with 704 rushing yards and eight touchdowns in just six games played. Had he played the first three games of the season, Keene likely would’ve had two 1,000-yard rushers in one season.

“I think that is because of our blockers,” Morris said. “Hopefully we can continue to get that. We built the culture and planted the seed, now our underclassmen need to let that seed grow.”

Ok, so Keene put together a nice season. Now what?

The first step, Patnode said, is to start to continue to build the youth football programs in the area. The participation numbers at Keene are low compared to other schools across the state, and having a more solidified youth football program could help keep the numbers consistently higher.

The Keene Knights — which will be competing for a Granite State League Championship Saturday morning — serves as a feeder program for the high school, but Patnode believes the community needs more youth football to compete with programs such as Londonderry, Exeter and Pinkerton each year.

The first step, he said, is to develop a middle school football program to directly feed into the high school program. Next, he’d like to see the Keene Knights get free use of the high school facilities in order to help keep participation costs lower.

Those two things, he said, can help create a more solidified football program in Keene.

“My job is to try to get all the pieces in place so that we can get a program going here,” Patnode said. “We’ve had the occasional team. John [Luopa] (former Keene High football coach) had some good teams in 2012 and ’13. He had a team that nearly made the final in ’12. But it comes and goes."

Luopa led the Blackbirds to four playoff appearances in his 12 years of coaching at Keene, including 8-3 records in 2012 and 2013, and a West Division Championship in 2013.

Patnode hopes to bring that type of success back to Keene.

“This was a good group,” Patnode said. “But I’m hoping now that the group behind them saw the way that we want to play football here and are buying into it and come out of the gate next year ready to rock and roll.”

It was a group that had pride to be part of the program, especially the senior class that was an enormous part of this season’s success.

There were 14 seniors on the roster, many of whom played significant roles on the field all season.

“I can’t tell you what a joy they were,” Patnode said. “I looked forward to practice as much to see them and say, ‘Hey, how you doing?’ as I did to get better that day. It was just that kind of group. It was fun.”

“The senior leadership this year was awesome,” Patnode said. “I can’t say enough about that senior class. In my career, I’ve had two or three or four that have just stood out and this crowd stands out. They push each other, but they’re kind to each other. They did everything that I asked. Never had a problem.”

“We’ve all been playing together for a long time,” Lilly said. “We all were lifting in the offseason, so that was a big help. We all know each other so we know how we play. When you put all of that together you get something special.”

The Blackbirds had a plethora of young talent to complement the seniors, starting with sophomore quarterback Aiden Tarr.

With the running backs Keene had, Tarr didn’t have to throw the ball much during the season, but when he did he looked comfortable.

“Sophomore kid comes in and plays that position ab”out as well as anybody can play it with that sort of experience,” Patnode said of his signal caller. I can’t say enough about the job he did. He made some decent pass plays against Merrimack that were big that day.

“And you don’t know how many times out there he audibles,” Patnode added. “He’ll do whatever he has to do to get us out of a bad play. He’ll do that over and over and over.”

Patnode also mentioned sophomore Seamus Howard and freshman Evan Ray as other underclassmen who stepped up in big moments during the season.

“That’s the sort of future that if we can take those kids and build around them and get more numbers, then we can have a good football program,” Patnode said. “There’s no reason why we can’t.”

Tarr is also excited for the future of the team.

“We’ve got a lot of character, we’ve got a lot of heart,” Tarr said. “There’s no question when we step on the field, everyone is giving 100 percent. That’s a great mold for my class and other classes below me coming up to feed off that. They led the way, we’re just following in their footsteps.”

After the successful 2021 season, Patnode only sees one more major hurdle to jump over to solidify the Keene football program.

“The only hurdle is participation,” Patnode said, adding that it will take time to build the feeder programs up and get participation to the level that he wants. “But that’s it. We fix that and we’re rolling, I feel. Everything is in a nice spot to get better and improve.”

Editor's note: This story was updated to include more historical information on the Keene High football program.