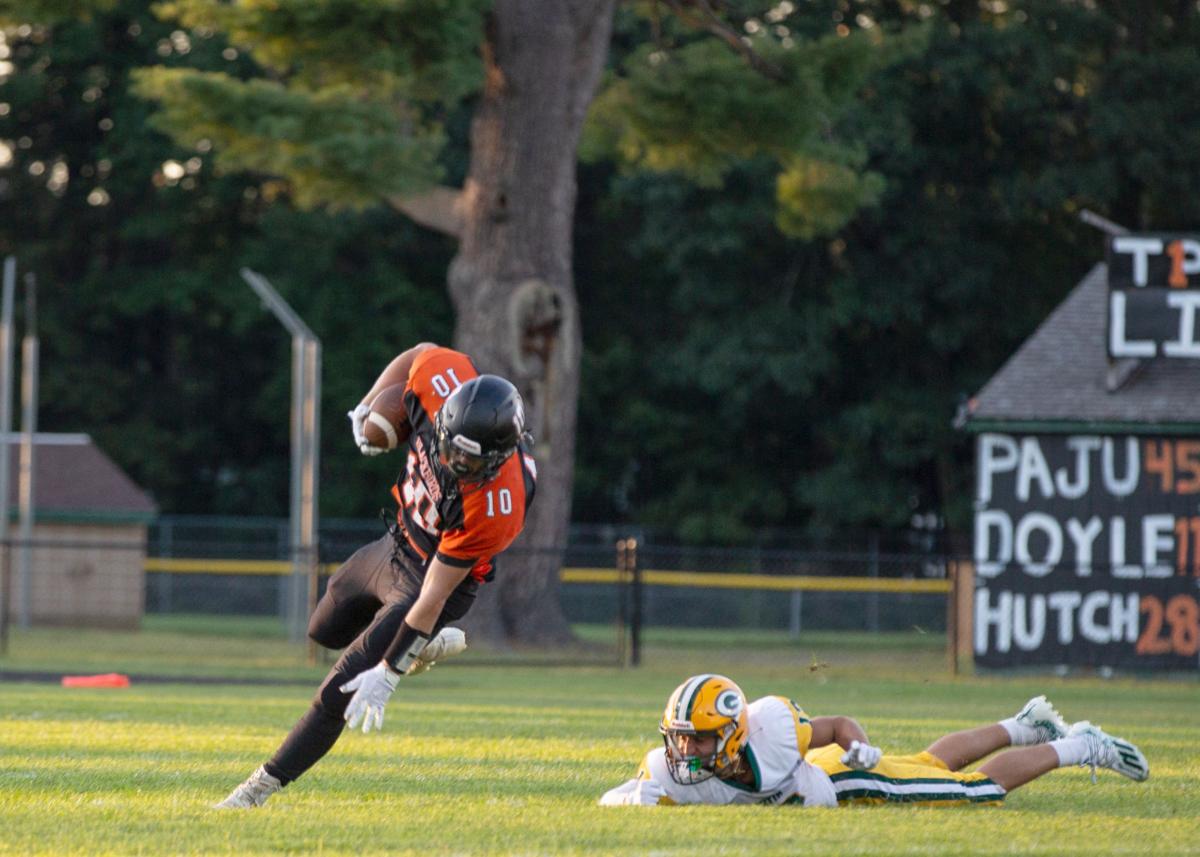 Keene High senior Jared Rokes stumbles, but continues running down the field after Bishop Guertin junior Chase Amaral tries to tackle him in the first quarter of the season opener at Alumni Field Friday. 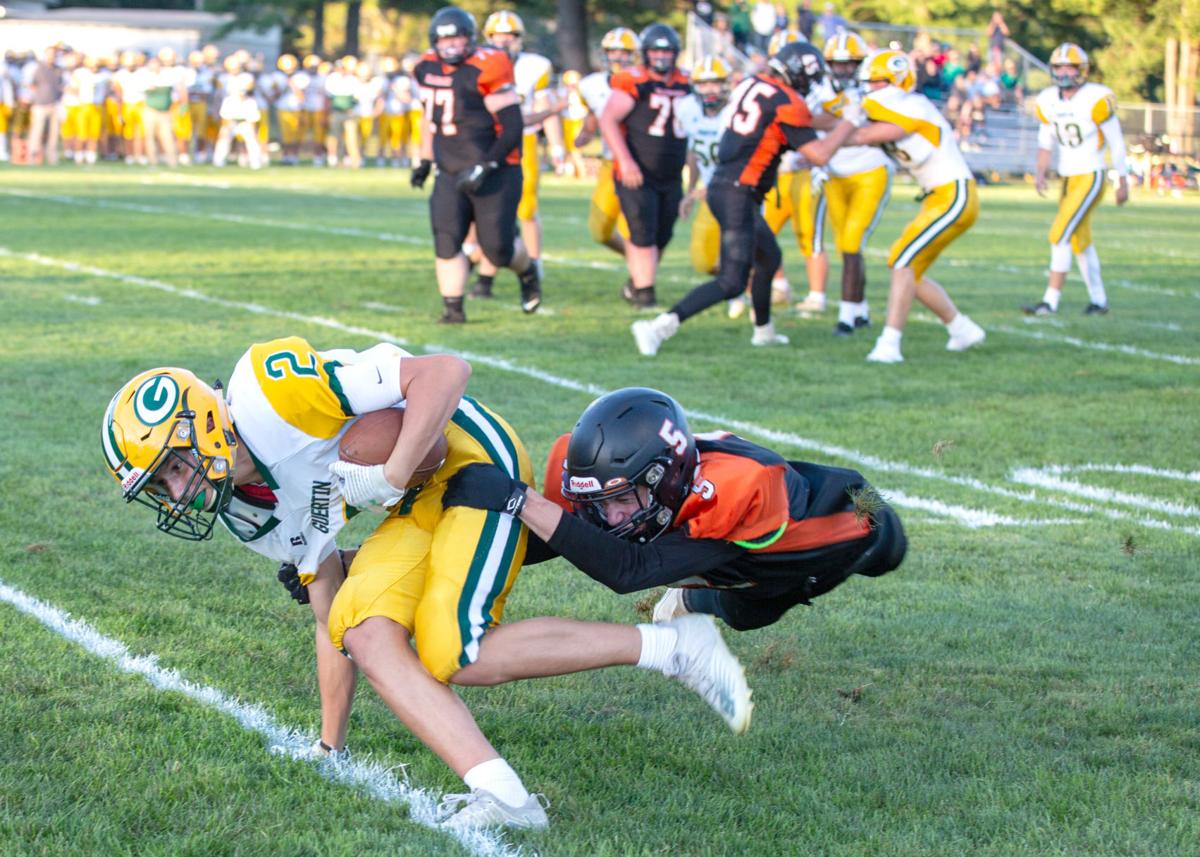 Senior Keiran Norman (5) of Keene High tackles Bishop Guertin sophomore Cody Syzmansky as he makes his way down the field in the first quarter of their game at Alumni Field Friday evening.

Keene High senior Jared Rokes stumbles, but continues running down the field after Bishop Guertin junior Chase Amaral tries to tackle him in the first quarter of the season opener at Alumni Field Friday.

Senior Keiran Norman (5) of Keene High tackles Bishop Guertin sophomore Cody Syzmansky as he makes his way down the field in the first quarter of their game at Alumni Field Friday evening.

The Keene High School football team started to find its groove in the second half against Bishop Guertin — thanks mostly to a running game anchored by senior Jarrod Rokes and sophomore Wyatt Avery — but penalties and turnovers were ultimately the Blackbirds’ downfall in 34-13 season-opening loss to the Cardinals Friday night in Keene.

Down 13-6 in the third quarter, the Blackbirds had a chance to tie the game, marching all the way down to the Cardinals’ 2-yard-line, before the BG defense kept Keene out of the end zone to preserve the lead.

After Bishop Guertin took over on downs, junior Matt Santosuosso escaped the Keene defense and, just like that, the Cardinals were up 20-6 late in the third.

Keene scored on the first play of the fourth quarter to bring themselves within striking distance once again, but the Cardinals scored two quick touchdowns in the final frame to all but put the game out of reach.

“Certainly wasn’t the game the scoreboard indicated,” said Keene head coach Linwood Patnode. “We had them on the run. We screwed up a defensive play. You give [Santosuosso] a little bit of a crack and he’s going to take it the whole way. Up until that point, we were six inches away from making it 13-13.”

Wyatt Avery scored both of Keene’s touchdowns, including an electrifying kickoff return on the opening kick to give the Blackbirds an early 6-0 lead after the missed extra point.

Outside of Avery’s opening touchdown, Bishop Guertin controlled the first two quarters of play, keeping their offense on the field for almost the entirety of the first half. Santosuosso and junior Charlie Bellavance kept the Cardinals moving down the field in the first half.

"[Our offense] is a lot more run-oriented," said Bishop Guertin head coach John Trisciani. "Charlie ran really hard and Matt, too, was picking his spots. He's a tough kid and a really good athlete. It was nice to be able to run the ball and keep the clock moving."

Despite BG controlling possession, Keene’s defense kept the Blackbirds in the game, coming up with three fourth down stops in the first half.

But, immediately after two of those momentum-shifting defensive stops, the Keene offense gave Bishop Guertin the ball right back on the first play of each of those drives, deep in their own zone, and the Cardinals had ample opportunities to put the game out of reach early.

But the Blackbird defense continued to hold tough to end the first half and Keene found themselves down just one score, 13-6, after the first two quarters.

“I was very proud of their resilience when things when wrong in the first half,” Patnode said.

After Keene’s defense forced a three-and-out to start the third quarter, the offense finally started to find some momentum as Jarrod Rokes and Avery combined in the backfield to get the run game going.

That's when Keene got all the way to the Bishop Guertin 2-yard-line, but fell just short of the goal line. Then Santosuosso did his thing.

BG's Jakob Baker got credit for that long touchdown after Santosuosso handed him the ball after the breakaway and the Cardinals led 20-6 late in the third quarter.

Keene continued to find success in the run game and two consecutive long runs from Rokas and senior Tanner Payne put Keene back at the BG 2-yard-line as the third quarter came to a close.

Avery scored his second touchdown of the night on the first play of the fourth quarter to bring Keene back within a score, 20-13.

Bishop Guertin answered on the next drive, helped by a 15-yard penalty on Keene after a nice kick return, then scored again after another Keene turnover — their fourth of the night — to push their advantage to 34-13 and all but put the game out of reach.

“When BG scored twice in a six-minute span, it’s because our guys are deflating,” Patnode said. “That’s a learning thing.

“I’m very proud of [the team] because they played tough,” Patnode said. “And I’ve been looking for toughness here for a while. If we can maintain toughness and continue to play decent defense and keep our heads up, then we’re going to alright.”

"We're going to keep on pounding and we're going to try and keep getting better," Patnode said. "Just have to keep working at it."