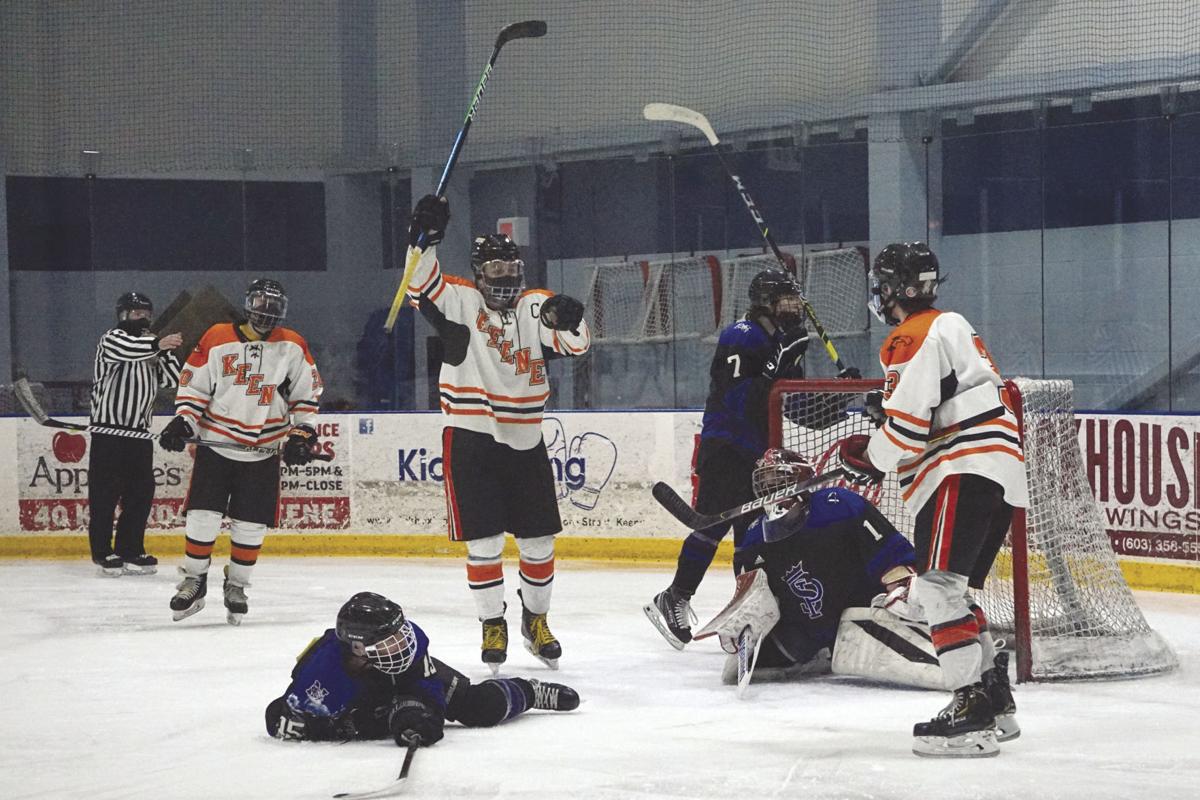 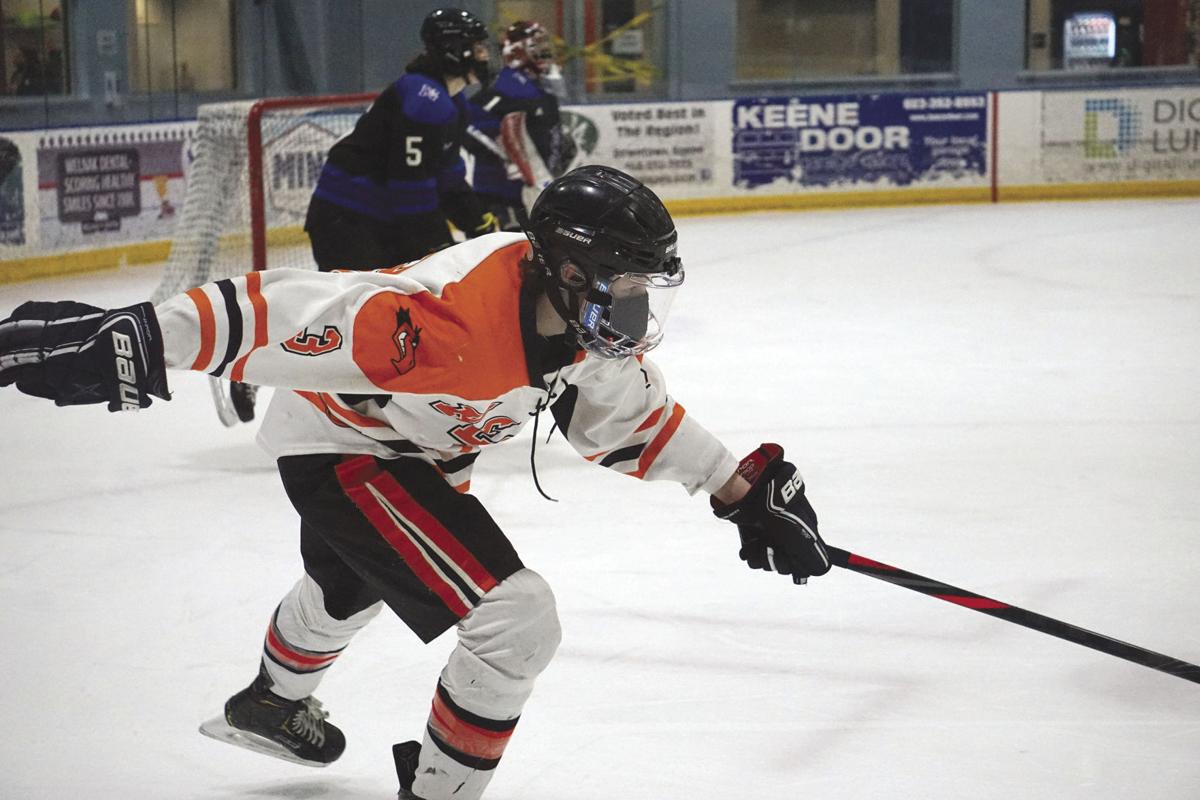 Freshman Noah Parrelli skates down the ice during the first period of the Keene boys hockey team's win over Nashua South Saturday at Keene Ice. 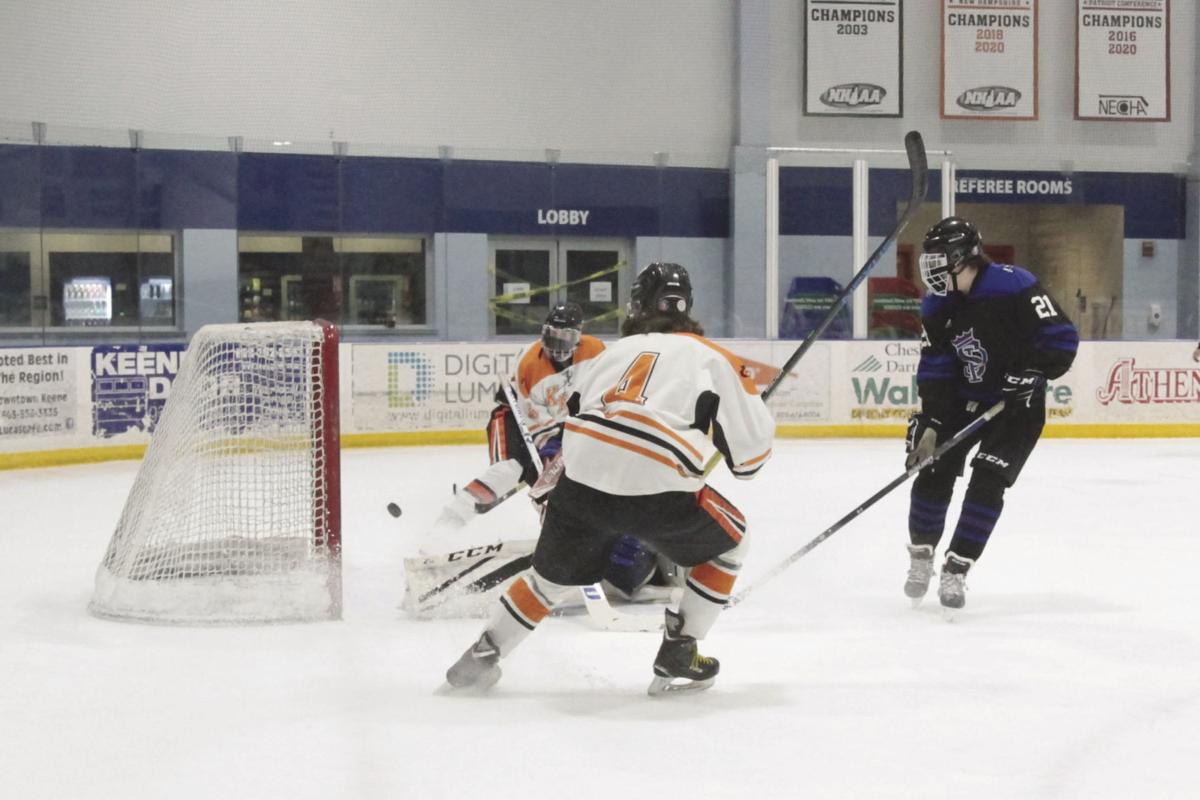 Freshman Casey Mooers (back) tips in his first career high school goal off a pass from junior Robbie Nowill (4) Saturday against Nashua South at Keene Ice.

After Friday’s loss — the team’s second in a row — Keene High boys hockey head coach Chris McIntosh said he wanted the guys to play with a chip on their shoulder Saturday.

You can say they did.

An offensive explosion in the first period gave Keene the early lead and put the team well on its way to a pivotal 9-1 victory over Nashua South Saturday at Keene Ice.

Because of a late start and subsequent COVID issues throughout the already-shortened season, this was only Nashua South’s fourth game of the year.

The win comes at a perfect time for the Blackbirds, snapping the aforementioned two-game losing streak in the final game of the regular season, and bringing the “fun” back to the locker room.

“I think they had fun today,” McIntosh said. “We were missing a little bit of that recently, so it was nice to see that back.”

Sophomore Joel Beard, who finished with two goals and an assist, got things started early, scoring a minute and a half into the game off a pass from classmate Jonah Murphy, who had a goal of his own in the third period.

And if you had so much as blinked after Beard’s goal, you probably missed the next one.

Seven seconds after Beard scored, freshman Noah Parrelli, who also finished with two goals and an assist, poked one in himself, also off a feed from Murphy, to give Keene a 2-0 lead.

“I was just seeing a great team effort from everybody,” Parrelli said. “Good sportsmanship all around. We were just playing our game and we stuck to it.”

The Blackbirds tacked on two more in that first period. Freshman Casey Mooers scored his first career goal with 7:50 to play in the first, and then Beard added another to cap off a four-goal first period.

“It’s nice to see Casey Mooers rewarded,” McIntosh said. “He’s been working hard all year. It’s finally nice to see one of those go into the back of the net.”

“I’ve been wanting to get him one all year,” said senior Zach Mooers, Casey Mooers’s big brother. “It’s the only year that we get to play together. It was exciting.”

Zach Mooers scored in the second period and had two assists.

Senior Taylor Panek got the start in net for Keene, his second start in as many days. Sophomore Orion Murphy came out to play the second period and senior Jacob Russell finished the game off in the third.

On Friday, Panek gave up five goals in the loss to Manchester Memorial, so McIntosh put the senior out there to get that game behind him for good.

“I wanted to make sure that there weren’t any lingering issues there,” McIntosh said. “He came out and played great.

“It was nice to see Orion in net,” McIntosh added. “I wish I could’ve got [sophomore] Liam [Jarvis] in there too — just a numbers thing at the end of the day. But both their times will come. And it was nice to get Jake back out there before the playoffs … to tune things up.”

Particularly in a such an unusual season, any scraps of momentum that a team can pick up can go a long way. In other words, a confidence-building win to end the regular season never hurts.

“For this season, it’s everything,” McIntosh said of ending the regular season on a high note. “Nice to see that flavor came back for us a little bit.”

“We got beat pretty badly the last couple of games,” Zach Mooers said. “It definitely knocked the morale down but, you know what, that happens. But today … [was] a big confidence booster. It was a fun game all the way around.”

Next, Keene hosts Nashua North Wednesday at 6 p.m. in the first round of the NHIAA tournament.