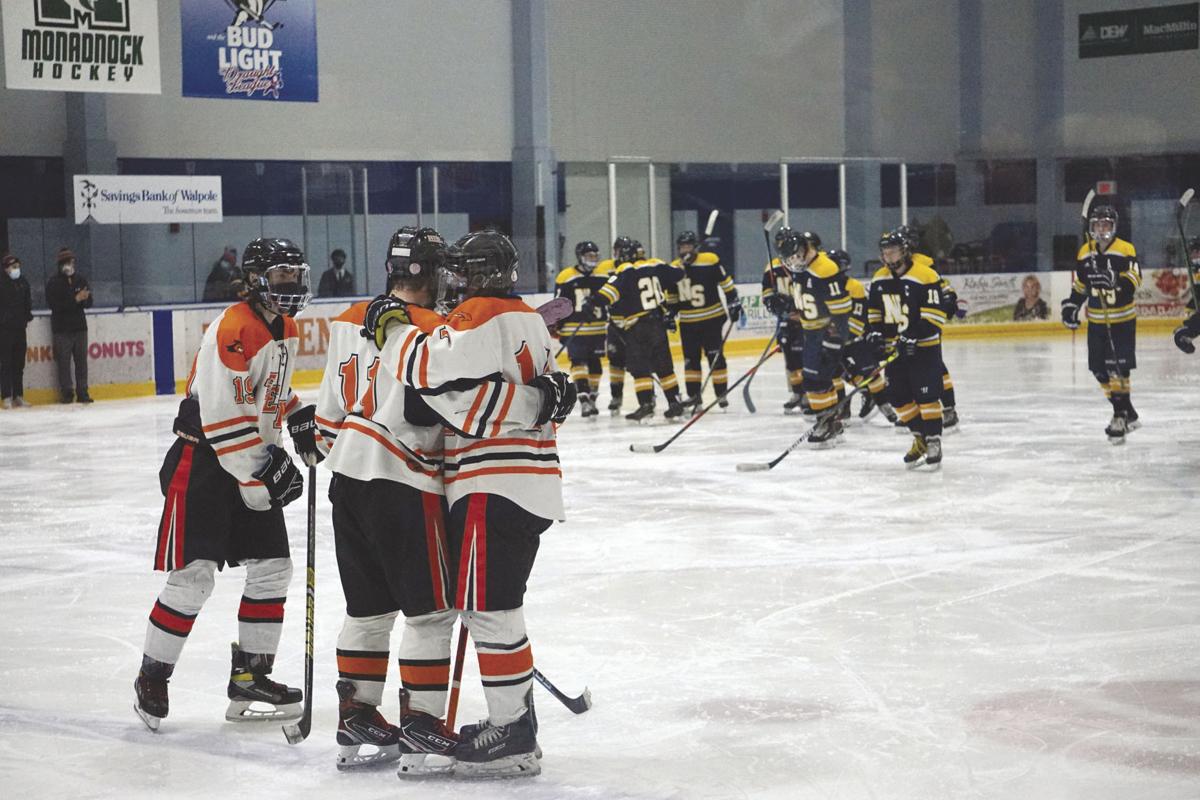 Senior Zach Mooers (11), sophomore Joel Beard (14) and freshman Casey Mooers (19) hug it out as Nashua North-Souhegan celebrates its overtime win over the Keene boys hockey team in the preliminary round of the NHIAA D1 tournament Wednesday at Keene Ice. 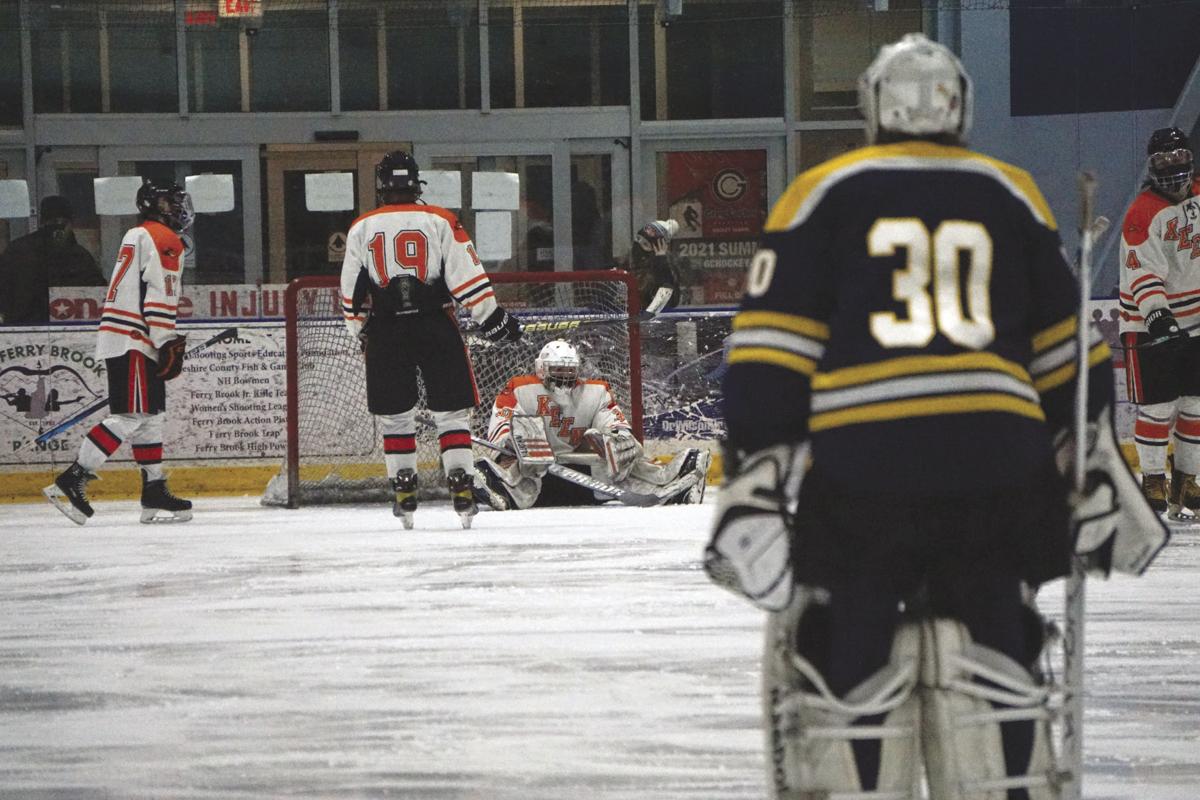 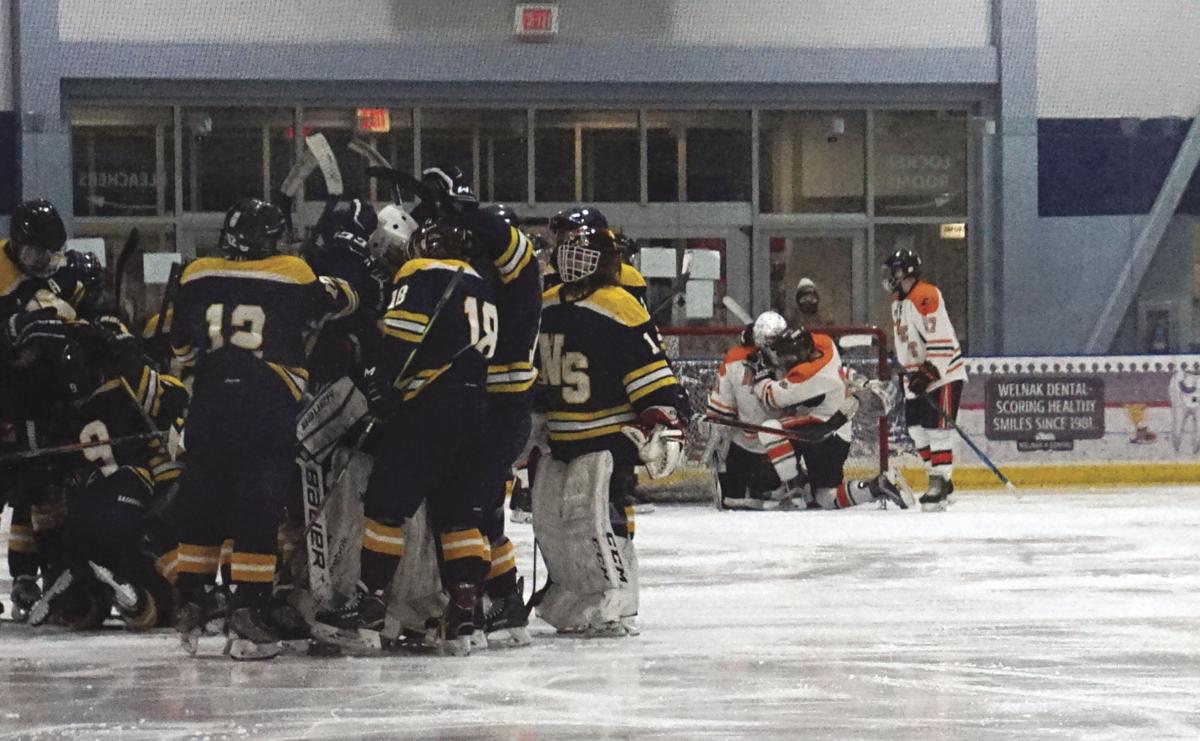 Senior Ethan Russell hugs his brother, senior Jacob Russell, as Nashua North-Souhegan celebrates its overtime win over the Keene boys hockey team in the preliminary round of the NHIAA D1 tournament Wednesday at Keene Ice.

Keene goalie Jacob Russell sat in front of the net, seemingly in disbelief, as the Nashua North-Souhegan boys hockey team celebrated its 4-3 overtime win over the Blackbirds in the preliminary round of the NHIAA tournament Wednesday at Keene Ice.

Ethan Russell skated over to his brother, and the two seniors hugged it out, on the ice together for the final time.

“I just skated as hard as I could over to him and I gave him a big hug,” said Ethan Russell after the game, with a hint of sentiment in his voice. “We started crying because it’s very emotional seeing us both play our last game.

“It’s just unreal playing with him all four years,” Ethan Russell added. “Watching how far he’s come and how good he has been — he’s really been the backbone of this team for the past three years.”

And Jacob Russell was good again Wednesday, credited with 23 saves and coming up with some crucial ones, specifically at the end of the second period to keep the score tied.

But, ultimately, sophomore Will Dodge scored the overtime game-winner, with 12:30 left in the extra period, to give North-Souhegan the playoff victory.

“[It’s] disappointing to end our season this early on in the playoffs,” said Keene head coach Chris McIntosh. “[But] I’m really proud to be the coach of this hockey team. I’m proud of the guys.”

Keene had its chances, outshooting North-Souhegan 34-25 in the game, but a mix of strong goaltending from junior Colin Duckless (31 saves) and a few bounces off the crossbar kept the Blackbird offense at ease for most of the night.

“It just seemed like we were going to have to fight extra hard to get some pucks in the back of the net,” McIntosh said. “Those are tough [games] to play in, because even when you’re doing the right things, you’re not getting the … results that matter ultimately.”

A few minutes after North-Souhegan took a 1-0 lead late in the first period, sophomore Jonah Murphy found some open ice and tied the game with just over a minute and a half on the clock.

But, about ten seconds later, North-Souhegan took the lead right back, and kept it, to end of the first.

Senior Peter Haas, who finished with a goal and an assist, tied the game in the second period and Jacob Russell made the necessary saves to keep it knotted up heading into the third.

North-Souhegan again took the lead in the final period, on a power play goal, but, right out of a Keene timeout, sophomore Joel Beard tied it at three with about three and a half minutes to play.

And then came overtime, which lasted less than three minutes and saw North-Souhegan put up three shots on net, including the game-winner, to Keene’s one.

Although not the ending the team was hoping for, McIntosh lauded the guys for their effort all season long, through the maze of a COVID-adjusted season.

“They came and they worked hard,” McIntosh said. “They were supportive of each other and they did everything we asked for.

And the guys recognized the challenges of the season too.

“We can’t get mad. We were lucky to play,” said junior captain Robbie Nowill. “The locker room chemistry was … top of the top this year. We really connected well in the locker room.”

“It’s been a really weird year,” Haas said. “We’ve had a lot of ups and downs on the ice and off the ice with the pandemic and stuff like that.

“But it’s high spirits,” Haas continued. “I think a lot of guys know, if you’re coming back you have a lot of time left on this team. And if you’re moving on, there’s bigger and better things in life than just high school hockey.”

It is a young team, and, despite losing a senior class that has brought a state championship and a co-championship to Keene, everyone seems confident that the guys coming back can do some damage on the ice in the upcoming years.

“It’s very exciting to see what the future holds for us,” said Nowill, who plans to return for his senior season next year. “We were a top-2 team in D2 for the last three-four years, and I can see us being a top-2 team in D1 in the next four years.”

“I’m excited to see the young guys come back,” McIntosh said. “I think this team is in such a good position moving forward.”

And McIntosh emphasized the imprint that this senior class leaves on the program.

“[The seniors] have really brought Keene High hockey to such a great level,” McIntosh said. “They’ve all played really meaningful roles in our success over the years.

“It’s a tough one to swallow, but when you look back at … everything they’ve accomplished with the team, they should be really proud of what they’ve done,” McIntosh added. “They have been nothing but true Blackbirds.”

And the program clearly left an imprint on the seniors, too.

“For the large majority of my high school career, this has been my identity,” Haas said. “This has been the thing that people know me for. And even with the turnover of guys we’ve had over the four years, it’s been a pleasure each year. I think it’s helped me find my own path in life.”

“It was the best four years that I could’ve played,” said Ethan Russell.