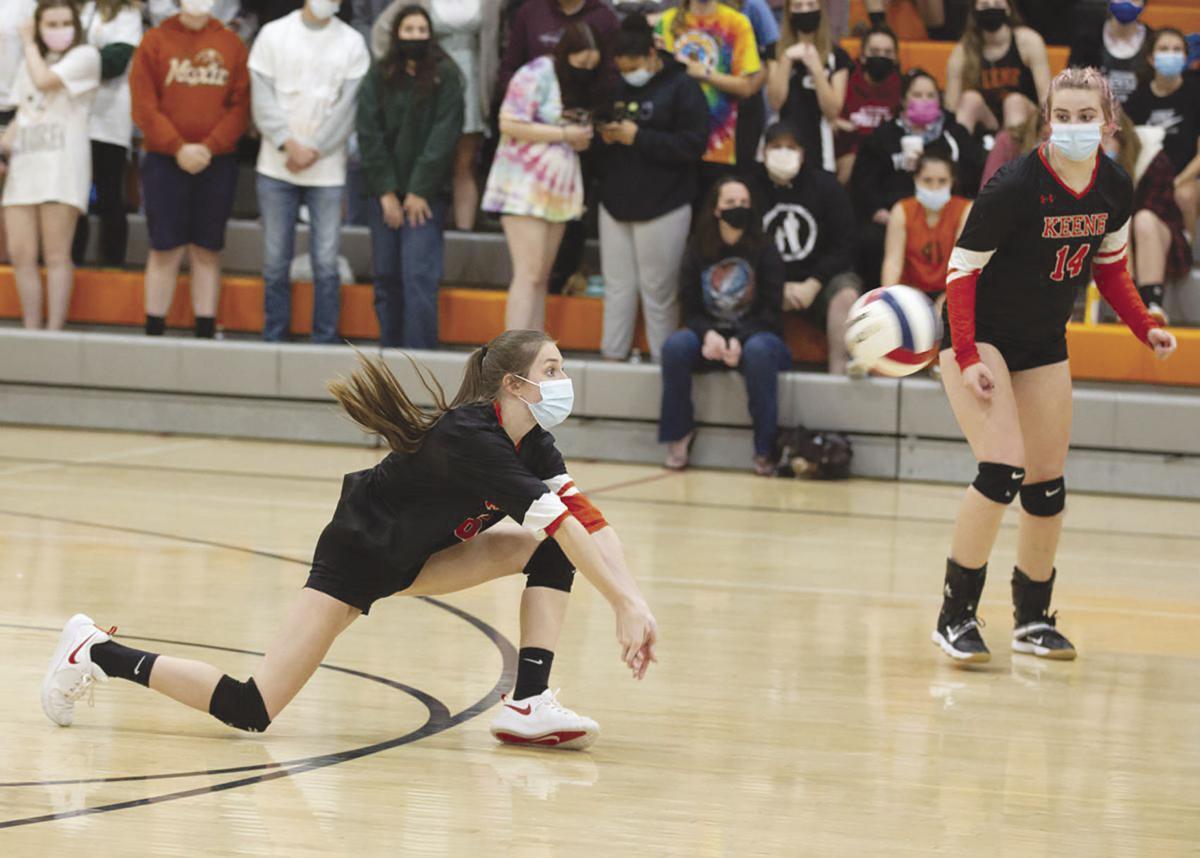 Senior Miranda Salema of the Keene volleyball team hits the ball forward to her teammates during their Senior Night game against Pinkerton on Monday Oct. 18. 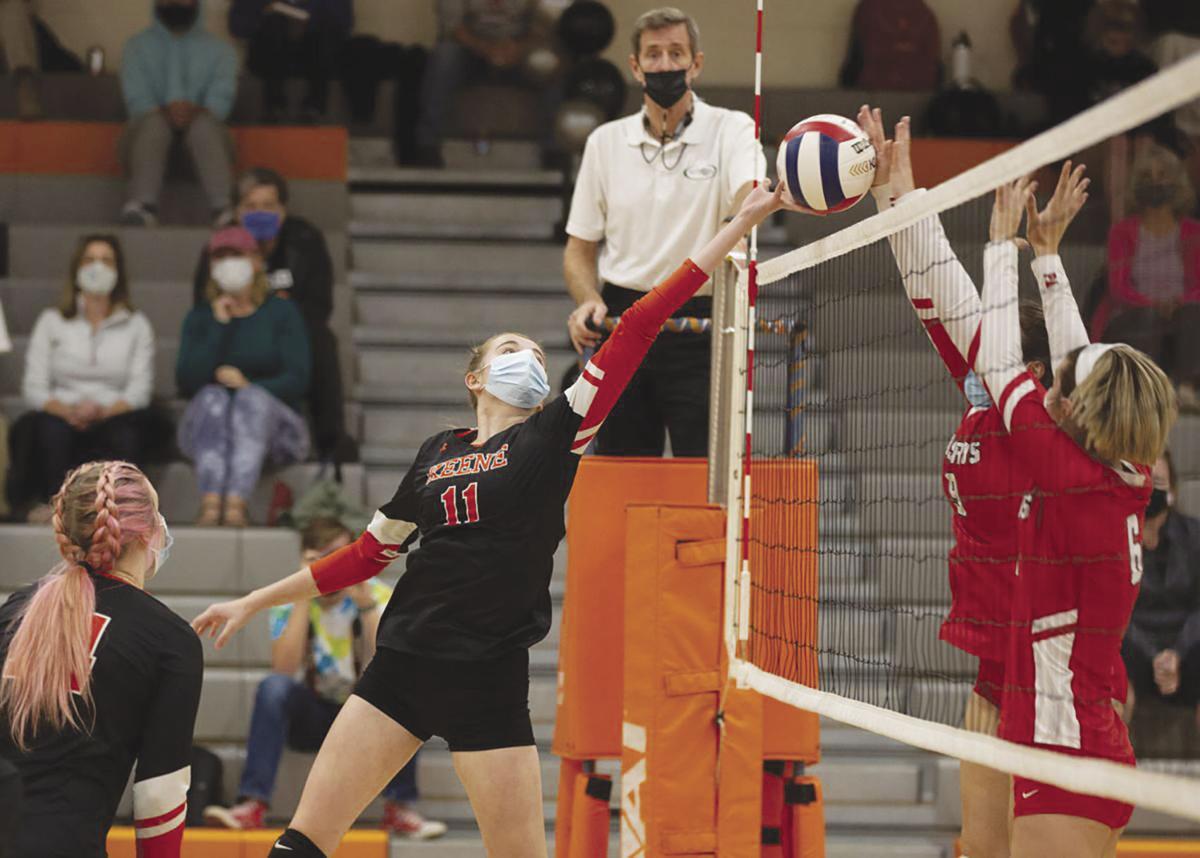 Sophomore Gwynneth Norman of the Keene volleyball team tips the ball over the net as Pinkerton jumps to strike it back, during their game at Keene High on Monday Oct. 18.

Senior Miranda Salema of the Keene volleyball team hits the ball forward to her teammates during their Senior Night game against Pinkerton on Monday Oct. 18.

Sophomore Gwynneth Norman of the Keene volleyball team tips the ball over the net as Pinkerton jumps to strike it back, during their game at Keene High on Monday Oct. 18.

The last time the Keene girls volleyball team was in the playoffs, the current Keene seniors were in elementary school.

It’s been 11 years since the Blackbirds earned a spot in the NHIAA Division I postseason bracket. That year — 2010 — Keene was the No. 14 seed and lost 3-0 to No. 3 Salem in the first round of the playoffs. Salem later made it to the championship game.

Since then, the program has had its struggles, to put it lightly.

Keene has won nine games in the five years leading up to this season. They had just one win in 2019 — the last full season before a COVID-shortened year in 2020.

This season was different.

The Blackbirds racked up 11 wins and earned the No. 9 seed in the DI bracket, setting them up for a date with Bishop Guertin in Thursday’s preliminary round.

“I think a lot of them are still trying to process it,” said fifth-year head coach Gabby Arig during practice Tuesday. “It’s a crazy amount of excitement and also a lot of nervous buildup.”

Some of that nervous buildup might come from the playoff inexperience that litters the Keene roster. Senior Phoebe Rigg has some postseason volleyball experience; she played on a championship team as a freshman in Idaho.

But the team is trying not to let that lack of postseason experience affect things, Rigg said.

“Most of us have tried not to think about the pressure of it too much,” Rigg said. “More so, we’re just treating it like a normal game, so we don’t put too much pressure on ourselves.”

As a matter of fact, the team is trying to use that to its advantage.

“Since we’ve never experienced any of this, it makes our drive a lot stronger to do well,” said senior captain Miranda Salema. “I think some of the anger from [last year] is also a strong drive.”

So what is it about this team that has allowed the girls to turn the page for the program?

Simply put, it’s been the team camaraderie. “Family” is the word many of the girls used to describe the team.

“We’ve all gotten better with our chemistry and communication, said senior captain Olivia Salema, Miranda’s sister, who recently recorded her 500th assist this season — a school record. “Everyone is trying to push. We’re working as hard as we can.”

“I’ve never been this close with a team,” said senior Lauren Fabis. “It’s been fun, and to play at the level that we’re at is cool.”

That camaraderie has helped the team find itself this year, especially the underclassmen who the Blackbirds will look to in the future.

“I feel very lucky,” said sophomore Gwynneth Norman. “I didn’t think I would get any better [after last year], but this year I can see that we’re all getting better because our bond is a lot closer than it was last year.”

“I’ve been on other sports teams, but this one is special to me,” said sophomore Heather Hastings. “We’re all a family doing this, and it’s been a nice experience.”

There’s also been a mindset shift through the years from previous seasons, Arig said, and that’s been invaluable in helping the team put its best foot forward.

“We went from thinking, ‘Do we even have a chance?’ to ‘What do we need to do to win?’ ” Arig said. “We’re really focusing on what we have to do on our side of the net to play our best.”

For the seniors, this year is the pinnacle of what has been years of rebuilding the program.

It’s been a long time coming, but Keene is finally back in the mix.

“This team was built from the ground up,” said Miranda Salema. “We were not that good three years ago. Last year we said, ‘This is a start.’ And then this season we came in and realized we’re really good. We’re excited to prove something.”

“We’ve kind of been building up to this for the past three or four years,” Rigg said. “We’re the best we have been on the court, but I think mentality and group-wise we’ve bonded a lot more. It’s really cool to say that I’ve been part of that.”

“I can’t picture this happening with any other team,” Arig said. “This year was the year for it. The seniors have led by example the whole way through.”

The No.9-seeded Blackbirds will head out to Nashua on Thursday for a first-round matchup with Bishop Guertin, the No. 8 seed. The match starts at 6 p.m.

The two teams have not played each other this year, but Arig and the Blackbirds have been doing their research.

“[Bishop Guertin is] super scrappy and they will fight for every ball,” Arig said. “We’ll need to be on top of our game and ready to work just as hard as they are.”

The Cardinals have the size advantage, so Keene will have to find a way to make up for that, something the team was working on in practice Tuesday.

Come Thursday, the girls will take the court in Nashua and cement themselves in the Keene volleyball history book as the team to break the decade-long postseason drought.

“It’s amazing to feel like we earned it,” Fabis said. “It’s been fun. Watching us grow individually has been fun because we get to grow together.”

“It’s a little emotional,” Arig said. “When you’re in the middle of the season, a lot of times it just feels like it’s another day, another game. But now that we’re in this situation, it feels surreal. The tie I have with these girls is incredible. It’s been amazing to watch. They’ve worked so hard and it makes me so happy to see them having this success.”