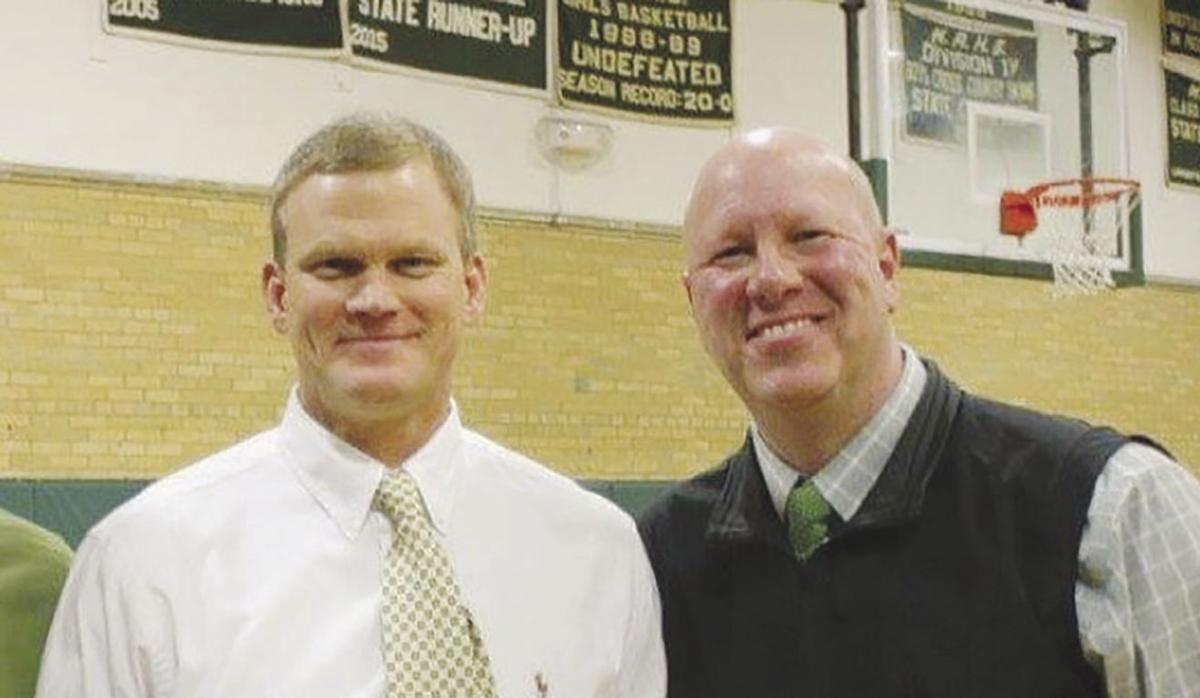 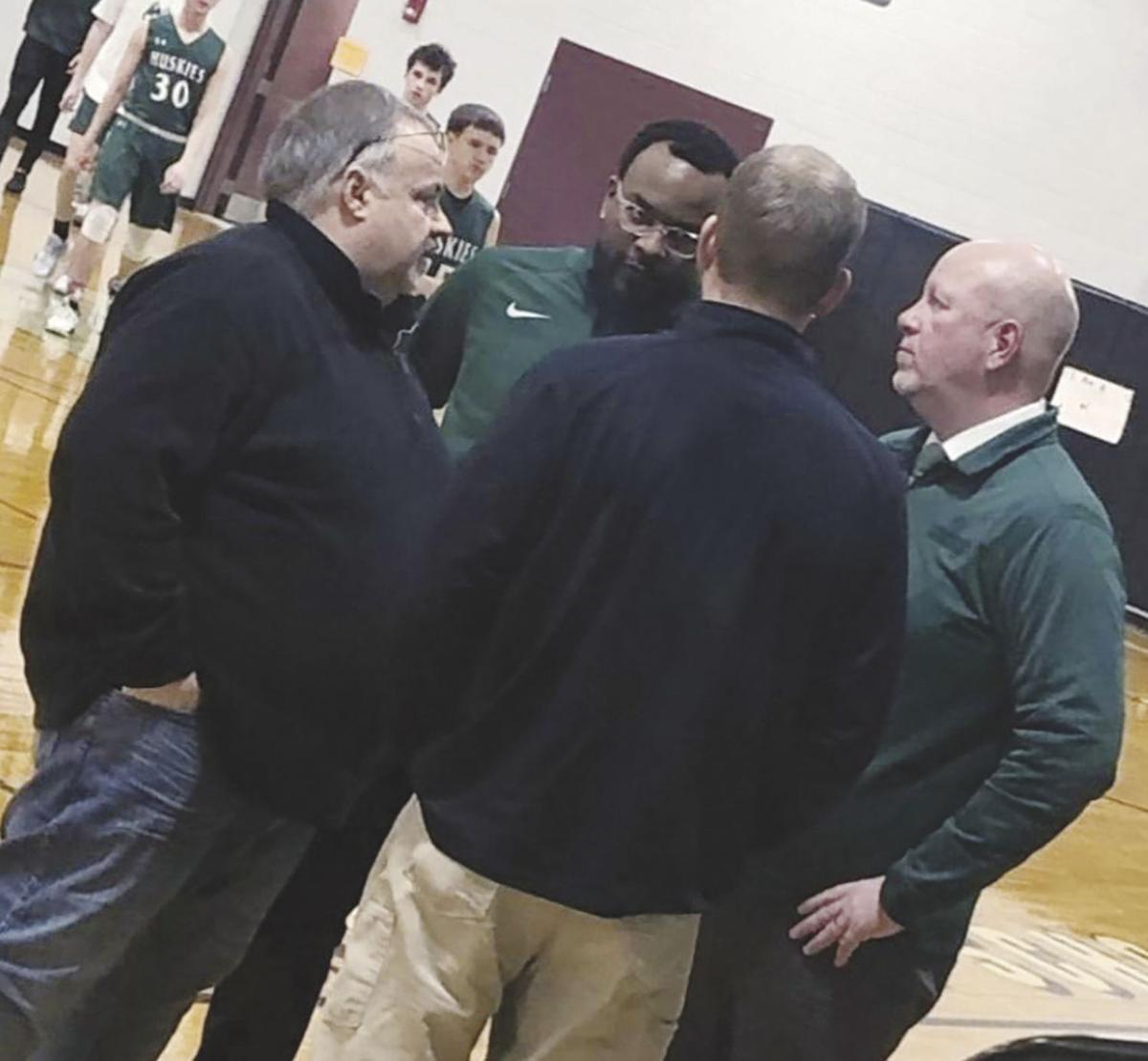 In any sports program at any level, the behind-the-scenes work is just as important as the final product on the court.

Although not officially assistants, the two volunteers fill that role for Jim Hill, who is going into his seventh year as head coach of the program. They balance their full-time jobs with attending practices and games to help Hill and the student athletes as much as they can.

All because of their love and passion for the school and program.

“Jeff and Eric, they’re gems, man. They really are,” Hill said. “They just care so much about our basketball program. They give so much of their time, effort and energy to it. We wouldn’t be successful without those two guys. There’s just no way.

“Those two guys are just so invaluable,” he added. “When we have people like that, that want to support the program, it makes it easier for everyone.”

Smith and Stanley do anything and everything they can to help the program. That includes filming all the games and then attending film sessions, working with the students during practice and doing whatever else is needed for the team.

“I try to be there for the kids,” Smith said. “If they need something, I try to help them out.”

The two also help with fundraising and sponsorships.

Back when they started helping the program, when Hill took over as head coach, the team hadn’t had a winning season in the previous four years. The program needed a spark.

The first step to that, Smith said, was getting people through the door during home games to support the team.

“Eric and my role was trying to get it to, when we first took over, having more kids in the student section to try and pack the house,” Smith said.

And that’s exactly what the two did, to the point that Monadnock’s opponents will sometimes comment on the atmosphere in the gym.

Smith has been involved with the program, on-and-off, since he started playing basketball in middle school. He graduated from Monadnock in 1985, with Stanley, and was a 1,000-point scorer on the varsity team. He came back to the program in 2014 as an assistant to Nick Hill, the head coach at the time.

Nick Hill took a leave of absence during the 2014 season and that’s when Jim Hill took over as head coach, with Smith staying on the staff.

Stanley came into the picture at that time as well and the rest, as they say, is history.

Stanley never played basketball, but said he always had a love for the sport. Plus, him and Smith go way back (they were locker buddies as students at Monadnock and graduated together) so it was an easy decision to help out with the program.

He is also a member of the school board and helps with the football team as well.

“I was very involved with the school anyway,” Stanley said. “I just try to be involved in the different things. If I can pitch in a little bit, I try to.

“I care a lot about this school,” he added.

Stanley is so involved with the school and the program that, two years ago, Hill started handing out the Eric Stanley Award to one student athlete who has a good attitude on and off the court and goes above and beyond around the community.

“It was probably one of the coolest things to ever happen to me was when Jim made that award,” Stanley said.

“To have that group recognize me for helping out — and I’m not looking for that — but it was neat to have them acknowledge it,” Stanley said. “And the coolest thing is that I get to recognize somebody who really steps up, which is really nice.”

The award is in its third year. Senior Nate Doyle was the first recipient of the award and Connor Branon, who has since transferred to a private school, earned the award in its second year.

“I was pretty honored to receive it — especially to be the first recipient of it,” Doyle said. “It just means a lot to me as a person. It humbles me a lot because it shows that I’m also making somewhat of an impact as [Stanley] has been doing throughout our community for years.

“[Stanley’s] just such a great guy. If anyone deserves that award it’s him, to have it dedicated after him. He’s done so much for our school, not just in basketball, but for everything around the school. He’s done so much. He’s just a phenomenal person.”

To have that kind of an impact takes a lot of time, effort and passion, things that all three coaches are willing to put into the program. All three graduated from Monadnock — Hill graduated five years after Smith and Stanley — so the bond to the school is naturally there.

“I think all three of us have a passion for the school,” Smith said. “A lot of us have a lot of passion to see the sport succeed and the school in general succeed so I think we put a lot into it and we take pride in all of it.”

And the students notice the passion and the pride that the coaches bring to the court during games and practices.

“They’ve been around basketball for so long that when we’re in an area where we’re stuck or we’re in a slump or we’re down or anything, they always know exactly what to say and what to do and they’ve always helped our team,” Doyle said. “As long as I’ve been here I’ve known them and I’ve always been able to trust them. I trust everything they say. They know what they’re talking about and they want to see the best for our team.”

No matter how much of an impact Stanley and Smith have on the team, they were both quick to pass the credit for the program’s success back to Hill.

“Jim took this thing and just ran with it,” Stanley said. “He’s just done a phenomenal job building it from a basketball team to a basketball program.”

“The program has come a long way through the efforts of Jim and developing the program,” Smith said. “Jim is the one that makes this program tick. He puts in a lot more hours than people realize.”