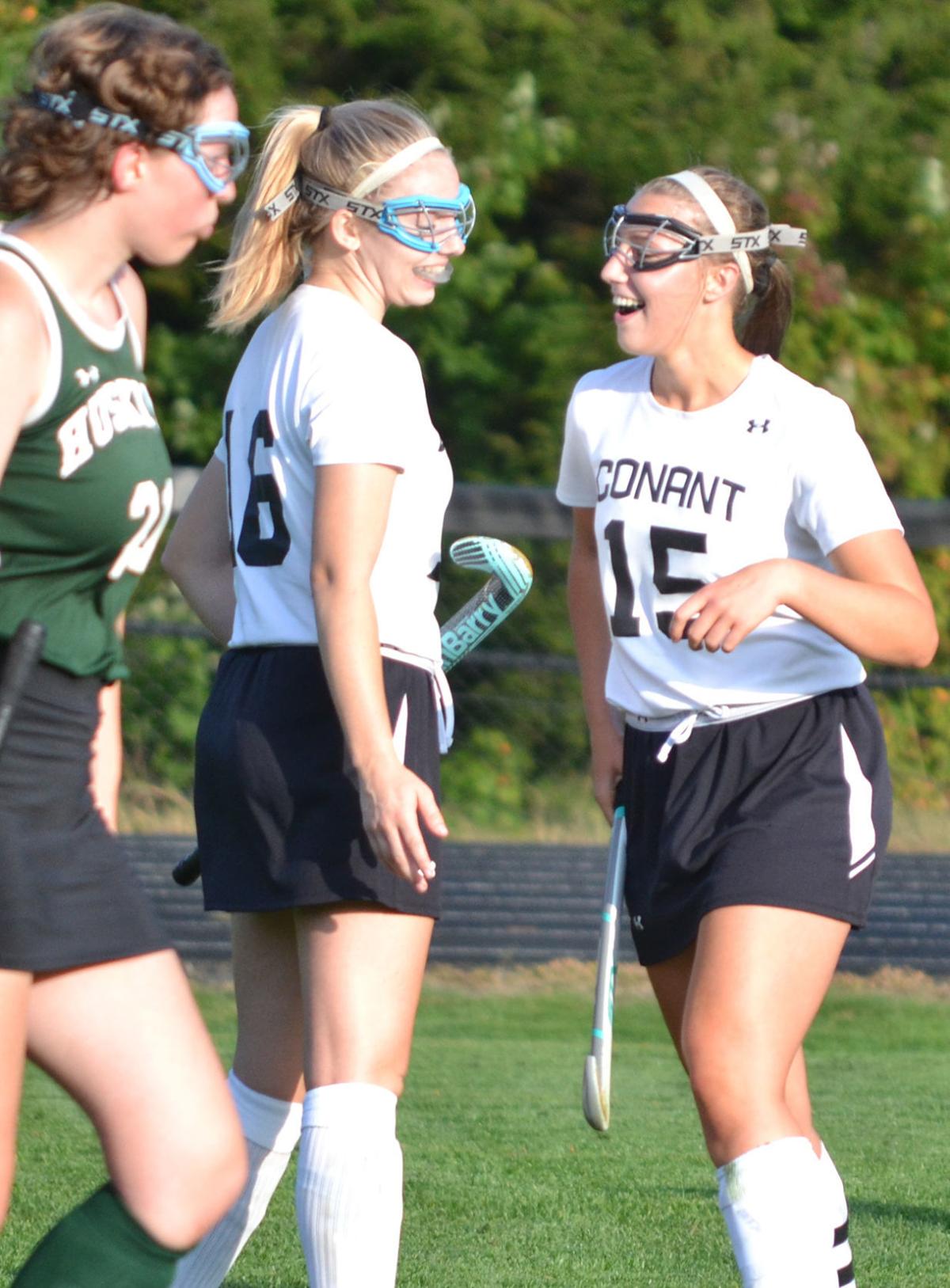 Conant forwards Elizabeth Gonyea, 15, and Teagan Kirby, center, scored all four of the Orioles’ goals Tuesday against Monadnock. The pair has accounted for 28 of the team’s 33 goals. 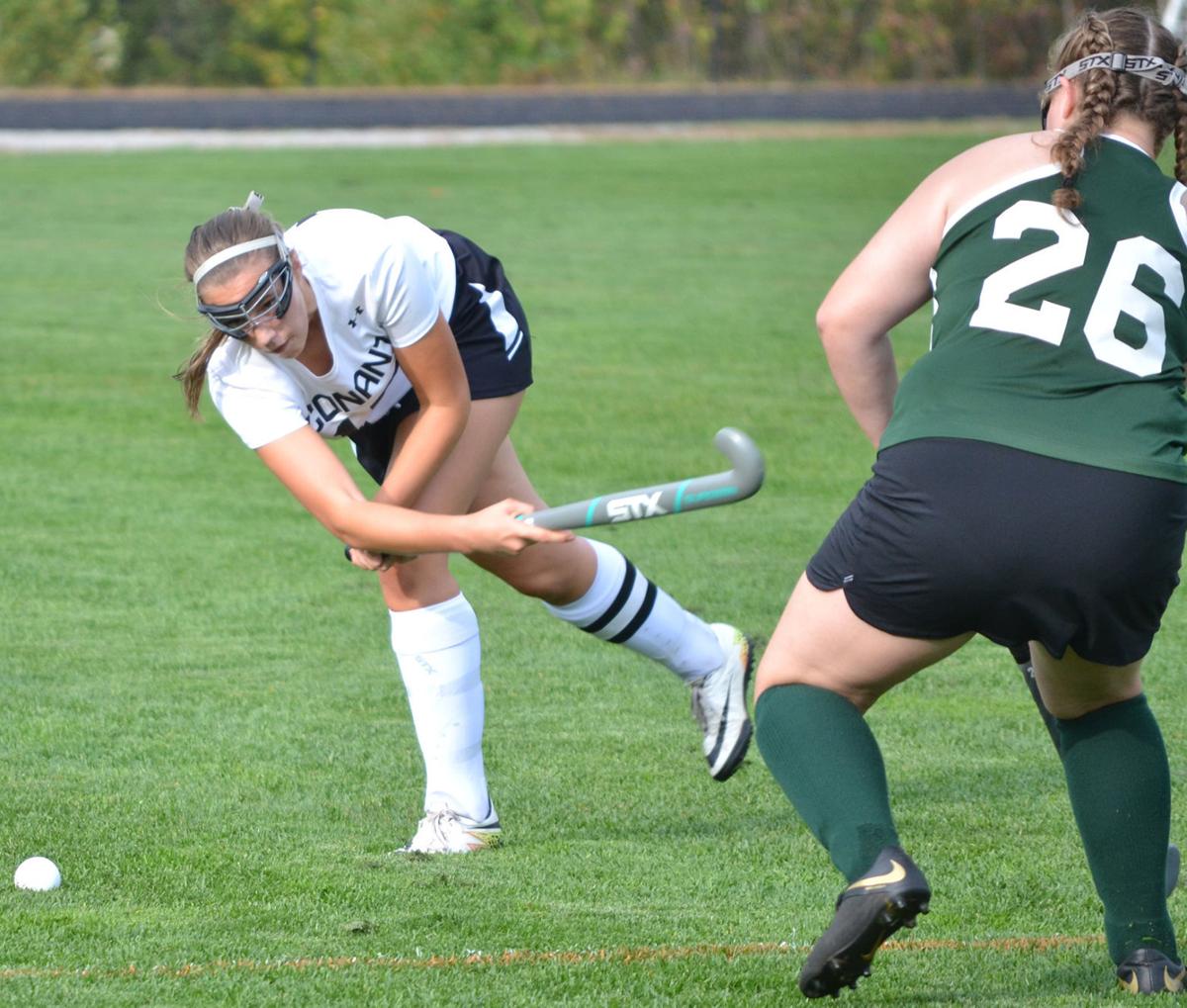 Elizabeth Gonyea, left, a junior forward, leads Conant with 16 goals to go along with five assists. 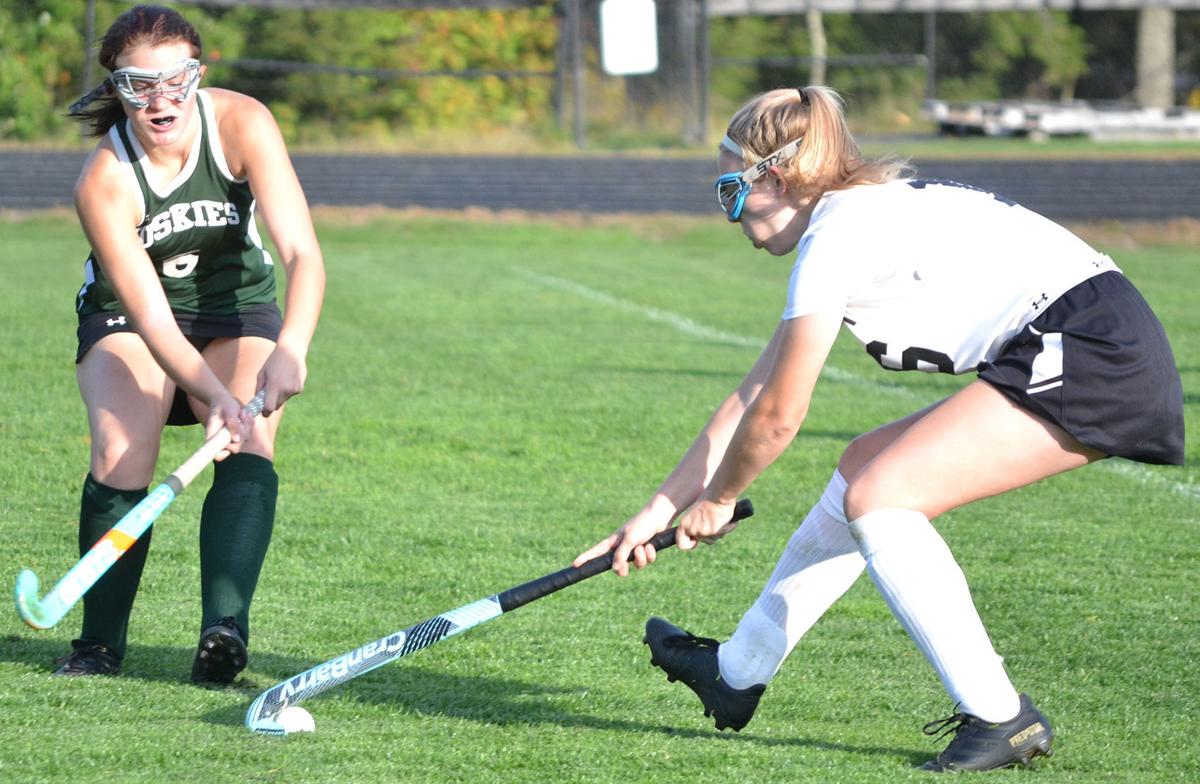 Teagan Kirby, right, a sophomore, has recorded 12 goals and a team-leading seven assists, all of which have gone to fellow forward Elizabeth Gonyea.

Conant forwards Elizabeth Gonyea, 15, and Teagan Kirby, center, scored all four of the Orioles’ goals Tuesday against Monadnock. The pair has accounted for 28 of the team’s 33 goals.

Elizabeth Gonyea, left, a junior forward, leads Conant with 16 goals to go along with five assists.

Teagan Kirby, right, a sophomore, has recorded 12 goals and a team-leading seven assists, all of which have gone to fellow forward Elizabeth Gonyea.

Both played key roles in the Orioles’ run to the Division III final four last year as underclassmen, and Gonyea helped the team win a state title her freshman year in 2017.

But this fall, the two have been tearing up the grass rather than the hardwood, becoming the two biggest cogs in the Conant field hockey team’s offensive machine.

The pair has scored 28 of the Orioles’ 33 goals — which is 13 more than the team had scored at this point last season — leading Conant to a 5-4 record thus far. It matches their win total from last year with five games still left in the regular season.

“We played basketball together, so we’re kind of like a dynamic duo in both sports,” Gonyea said. “We just read each other really well up top.”

The abilities of Conant’s “Batman and Robin” were on display once again in the team’s latest victory, 4-0 over Monadnock Tuesday. Gonyea led the scoring efforts with three goals, while Kirby tallied one goal and one assist.

“We kind of just know where we’re gonna be at this point,” Kirby said. “We’re working so well together, we just know, ‘oh, they’re gonna be up there,’ and then pass. We can just read each other.”

Both players bring the same hunger and drive to score that they bring to the court each winter.

Kirby, meanwhile, may not be able to make her attacks look as smooth, but her relentless pursuit of the ball makes her just as big a scoring threat. She also boasts her fair share of stick skills, as shown Tuesday at the start of the second half, when she took the opening possession and “air dribbled” it (tapping the ball repeatedly off her stick into the air while running forward) from midfield to within feet of the penalty box for an instant attack.

“It’s fun to watch,” Brown said. “Their passing, their give-and-go’s up the field are really great.

“They’re just athletes. Their hands are good, their sense of the field is good and they’re quick.”

As impressive as the two have been, Brown said a great deal of credit is also owed to their fellow forwards, Bella Hayes and Chelsea Dupuis.

Those two haven’t shown up on the scoreboard nearly as much as Gonyea and Kirby — with Hayes recording three goals and two assists and Dupuis having three assists — but Brown said their ability to get the ball upfield and push it into the box plays a critical role in setting up Gonyea and Kirby to score.

“[Hayes] and Chelsea on the right side work well with each other getting it up the field and feeding it in, and then Teagan and Liz are always there,” Brown said.

The Orioles’ young defense has made big strides this season — with new starting goalie Tessa Spingola recording her second shutout Tuesday, and center back Emily Muilenberg taking on a bigger leadership role on the back line. However, the group is still inexperienced, having given up 12 more goals this season (31) than the team had allowed by this point last year (19).

With that end of the field still working to fill the holes left by All-State graduates Mariah Chamberlain and S.J. Barney, the onus is on the offense to help keep the pressure on their opponents instead of their teammates, as Conant continues to push itself further.

“We have a lot of responsibility, because we have to keep up the team and keep the ball up from our defense,” Kirby said. “We’re working on that to get into the top 10 in New Hampshire.”

IN THE BOX: Orioles shut down Huskies to match last year’s win total