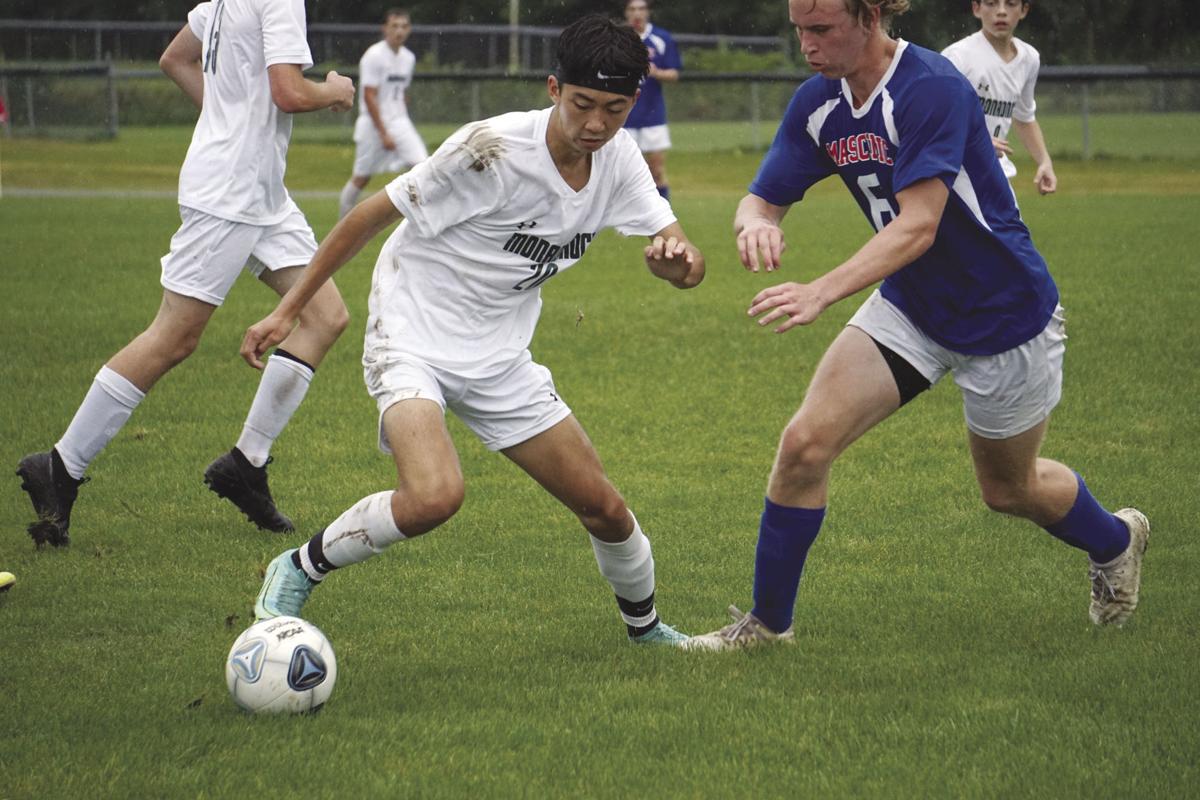 Senior Owen Manlove (20) of the Monadnock boys soccer team gets the ball past Mascenic’s Wyatt Duval during Thursday’s match in New Ipswich. 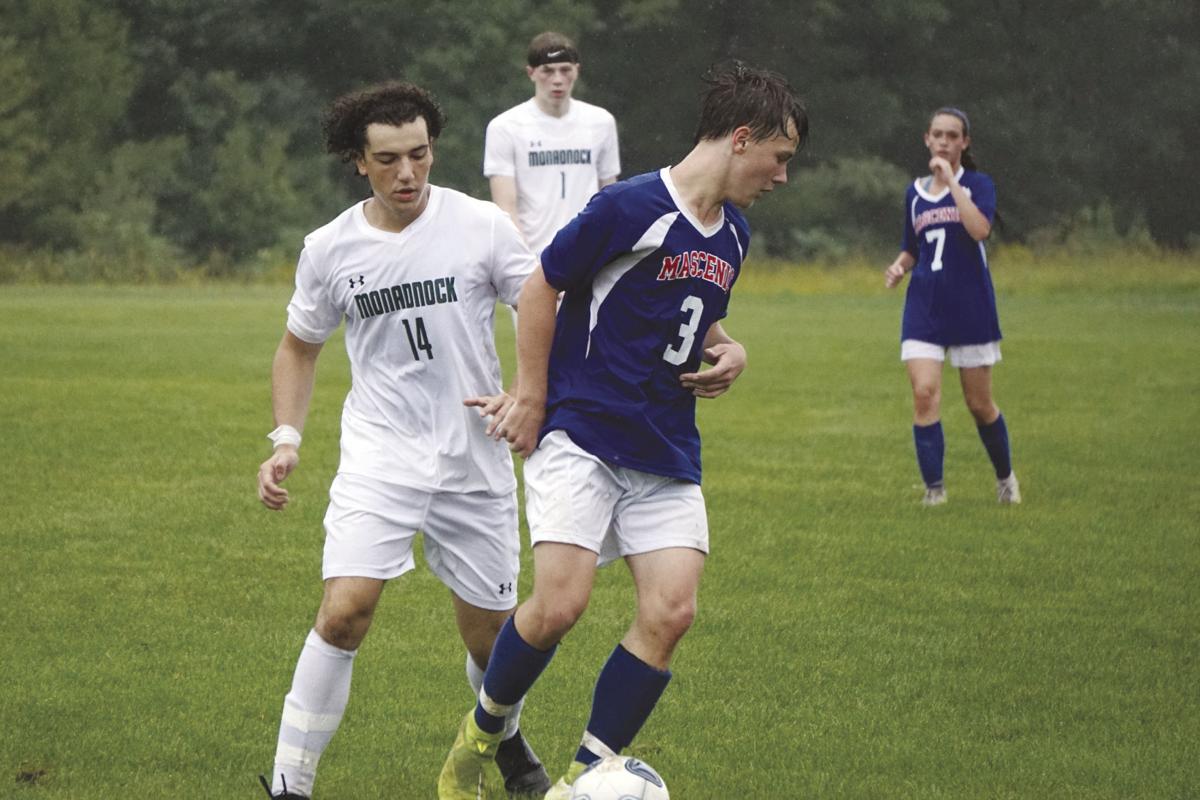 Senior Georgios Pananas (14) of the Monadnock boys soccer team tries to get the ball from Mascenic’s Corey Miller during Thursday’s game in New Ipswich.

Senior Owen Manlove (20) of the Monadnock boys soccer team gets the ball past Mascenic’s Wyatt Duval during Thursday’s match in New Ipswich.

Senior Georgios Pananas (14) of the Monadnock boys soccer team tries to get the ball from Mascenic’s Corey Miller during Thursday’s game in New Ipswich.

NEW IPSWICH — Despite senior Owen Manlove’s late second-half goal to bring Monadnock back into the game, the boys soccer team fell to Mascenic, 4-2, on a rainy Thursday in New Ipswich.

Senior Georgios Pananas also scored for the Huskies, tying the game at one in the first half.

Mascenic’s Sean Agonis was the Huskies’ kryptonite, scoring all four of the Vikings’ goals, including one in the final minute of play to put the nail in the coffin.

Not long after Agonis gave Masenic a 1-0 lead in the first half — off a rebound from a free kick — Pananas found the top corner of the net on a second effort shot to tie the game at one and that score held until halftime.

“We had a nice pass and got a through ball,” Pananas said. “I saw the first shot, then hit it with my left foot and it went in.”

After a down-pouring of rain during halftime, Mascenic started to put consistent pressure on the Huskies’ defense at the start of the second half, but for a while, Monadnock and their keeper Lucas Smith held strong.

“Lucas is amazing,” said Monadnock head coach John Naso. “We put him in net because he has quick hands. On a rainy day like today, anything can go in the net and he was there for us. He’s a great athlete.”

But then Agonis found the far end of the net with a perfectly placed ball about midway through the second half, and Mascenic took a 2-1 lead.

It looked like Monadnock was starting to run out of gas, and Agonis took advantage with about 13 minutes to go in the game, extending Mascenic’s lead to 3-1.

But just a minute later — if that — Manlove got a good foot on a feed from Pananas and all of a sudden Monadnock was recharged, down just a goal with still over 10 minutes to play.

“I was on the bench, and I saw [Mascenic] get a goal and I had to get in and get moving again,” Manlove said. “Came in, Georgios gave me a great ball and I just finished.

“I knew we got scored on, so heads were hanging low,” Manlove added. “Getting that next goal or at least getting shots on net really brings the team up.”

Manlove and Pananas had been trying to connect all game, and finally got one to go.

“Georgios and Owen have been working together for years,” Naso said. “They have such good chemistry up front. They know where the other one is and they move the ball well.”

Monadnock kept the ball moving late in the half, trying to tie the game, but Agonis stepped up again when Mascenic needed him, scoring his fourth of the game in the final minute of play.

“Four goals in a game, you can’t ask for much more than that,” said Mascenic head coach Andy Helliesen. “He’s strong, he’s driven. He’s been working on his shot a lot. He’s tough to mark. He’s fast. Even when he gets the ball, he can get away from you.”

Monadnock (0-4) has a quick turnaround, visiting Fall Mountain Friday for a 4 p.m. start.

“This is game four for us,” Naso said. “We keep improving, making better passes together. I think we’re coming together. Twelve more games to go.”

“Our defense is playing better, so we’ll get there,” Pananas said.