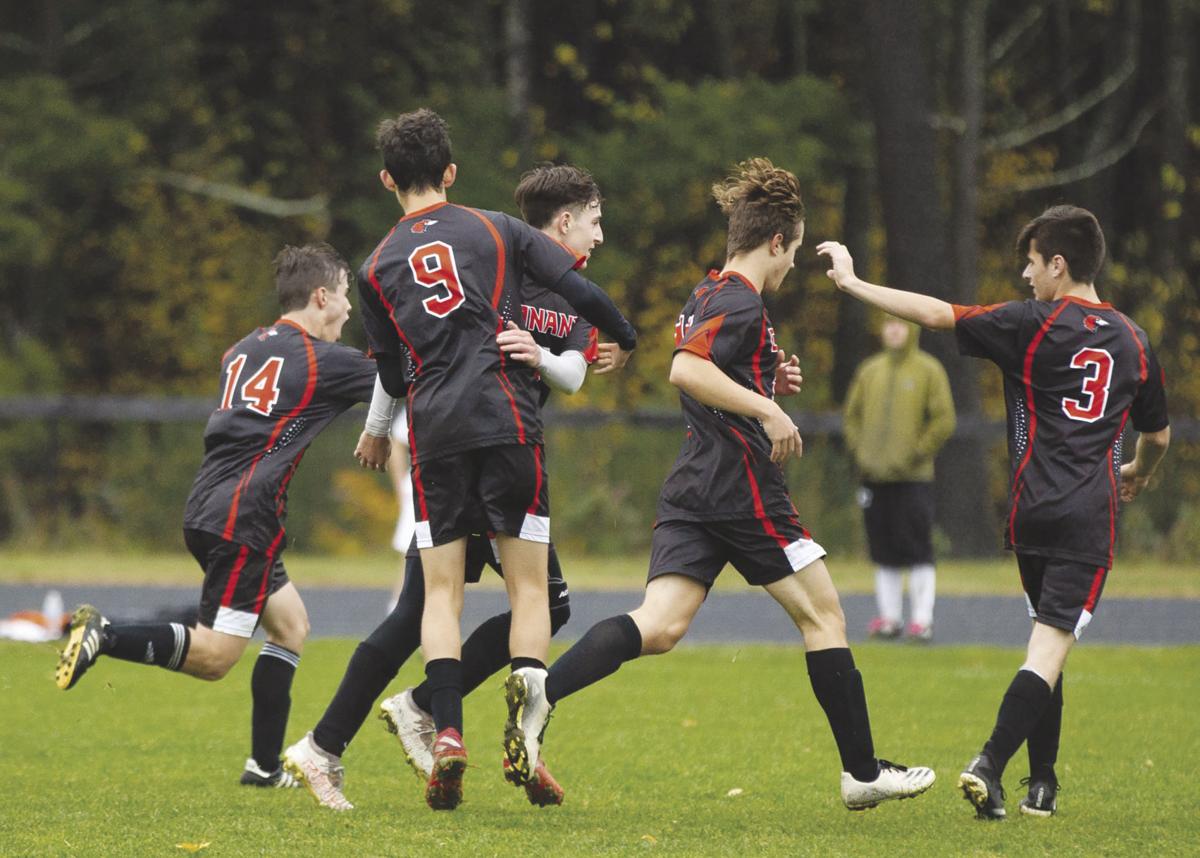 The Conant boys soccer team celebrates Ethan Vitello’s late goal during Wednesday’s win over St. Thomas Aquinas in the preliminary round of the NHIAA Division III tournament in Jaffrey. 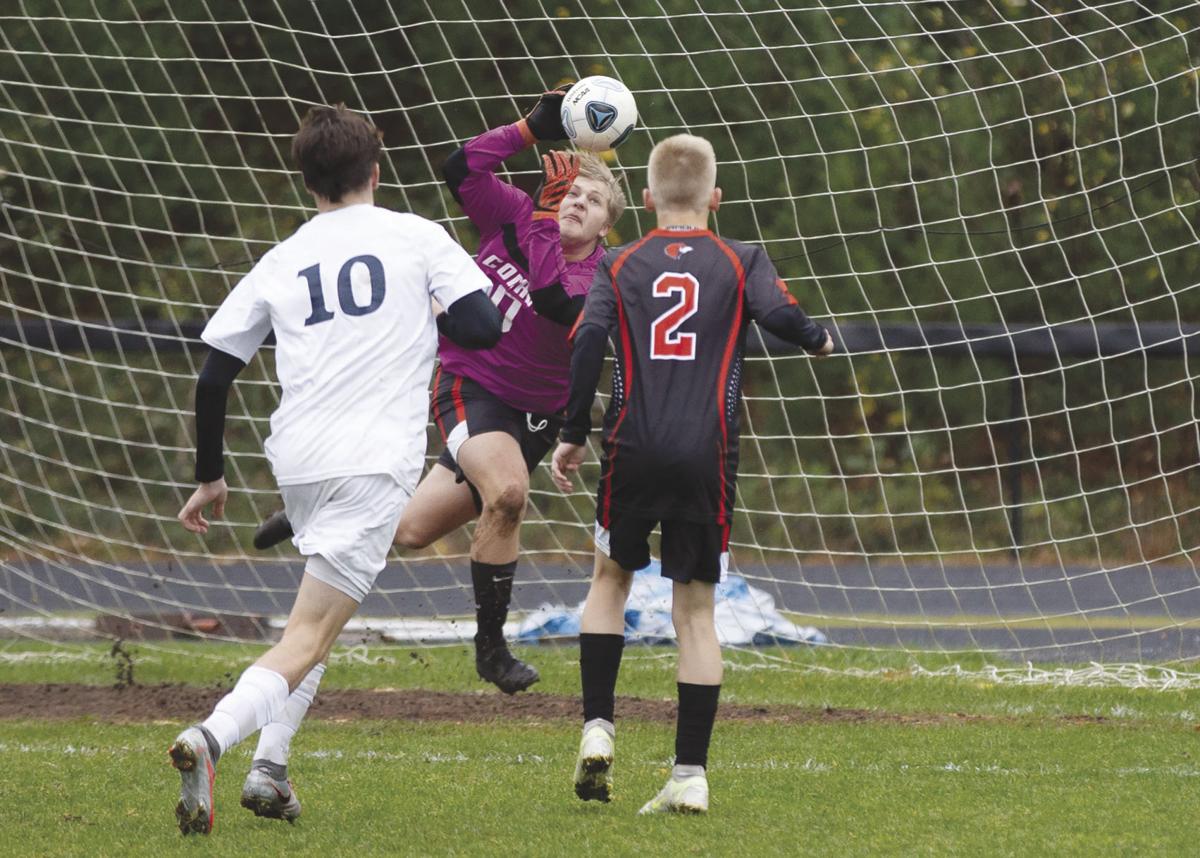 Senior Garrett Somero of the Conant boys soccer team makes a save during Wednesday’s NHIAA Division III preliminary round game against St. Thomas Aquinas in Jaffrey.

The Conant boys soccer team celebrates Ethan Vitello’s late goal during Wednesday’s win over St. Thomas Aquinas in the preliminary round of the NHIAA Division III tournament in Jaffrey.

Senior Garrett Somero of the Conant boys soccer team makes a save during Wednesday’s NHIAA Division III preliminary round game against St. Thomas Aquinas in Jaffrey.

JAFFREY — When senior Ethan Vitello found the back of the net in the 72nd minute, there was a huge sense of relief for the Conant boys soccer team.

Vitello’s late goal put the Orioles over St. Thomas Aquinas, 1-0, on a rainy Wednesday in Jaffrey in the preliminary round of the NHIAA Division III tournament.

Senior Noah Mertzic found Vitello on the far side of the field, then Vitello danced around a couple of defenders and eventually found the bottom corner of the goal.

“Noah did a good job checking the ball,” Vitello said. “He received it, then played me and all I had to do was cut it back and I whipped it in.”

Before Vitello broke free, the teams were in a scoreless deadlock, both playing physical soccer.

St. Thomas Aquinas had the early momentum in the first half, as sophomore Owen Simas slipped past Conant’s back line in the third minute, getting a point-blank shot off toward the net.

But Conant senior Garrett Somero made the stop.

“The conditions were terrible today, so I just had to sit back and hope I could get my footing and dive to save the ball,” Somero said.

The Saints continuously pressured Conant’s defense early, and Simas had another breakaway in the 32nd minute, then another on in the 34th minute.

Somero made the save in the 32nd minute and senior Michael Brooks got back in time to make the stop on Simas’ third breakaway.

“We came out a little flat,” said Conant head coach Tom Harvey. “Every game that we play from here on out will be this way, there aren’t going to be any more blowouts, so we have to be patient. It was a hard-fought game, and they’re all going to be.”

The teams were scoreless at the break — thanks in large part to Somero, who finished with six saves — and St. Thomas Aquinas continued to pressure Conant’s defense early in the second half.

The Saints had five corner kick opportunities in the second half, and got a couple of shots on goal, but none got past Somero.

Conant created some scoring opportunities too, and eventually Vitello snuck one in.

“It was such a relief,” Somero said of seeing his teammate score. “So much pressure was taken off, it was crazy.”

“It’s not the first time this season that Ethan has really taken control and made that extra little bit of effort,” Harvey said. “He’s always around the ball. He has great speed and great agility.”

The field conditions were certainly a factor on Wednesday, as players on both sides had trouble finding their footing on the wet grass. The game was originally scheduled to be played Tuesday but was moved to Wednesday because of the storm.

“[The field conditions] affected everything,” Somero said. “It affected our passing, running. We were slipping everywhere.”

“Shots too,” Vitello added. “Anytime the ball was in the air, it skips. It’s all about changing the way you play and reading those skips.”

The rain held off for a majority of the game but started to come down again in the second half.

“Anytime you play in the rain or right after the rain, it always affects the field,” Harvey said. “We have to be quicker on our feet. We can’t be on our heels as much when it’s rainy and drizzly and wet.”

The No.4-seeded Orioles played out the final eight minutes of regulation after Vitello’s goal, and punched their ticket to the quarterfinal round on Friday, where No. 5 Trinity awaits.

“We have to play a little harder,” Harvey said. “I think the boys will get that. We’ve been trapped in the gym for two nights, so getting back out on the pitch will be good. It’s going to be a really good game. We’re excited.”

Trinity knocked Conant out of the tournament last season with a 2-0 win in the quarterfinal round, then went on to win the DIII state title.

Photos from the Conant boys soccer team's 1-0 win over St. Thomas Aquinas in the preliminary round of the NHIAA Division III tournament in Jaf…