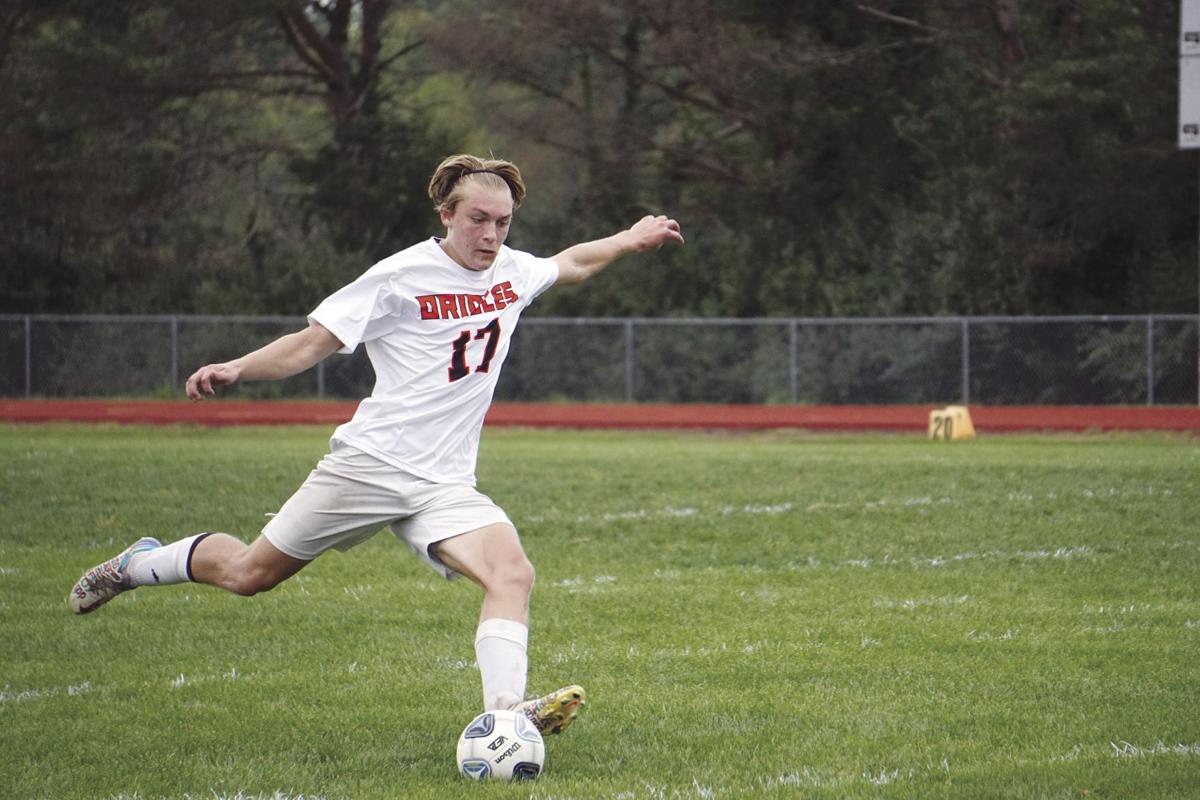 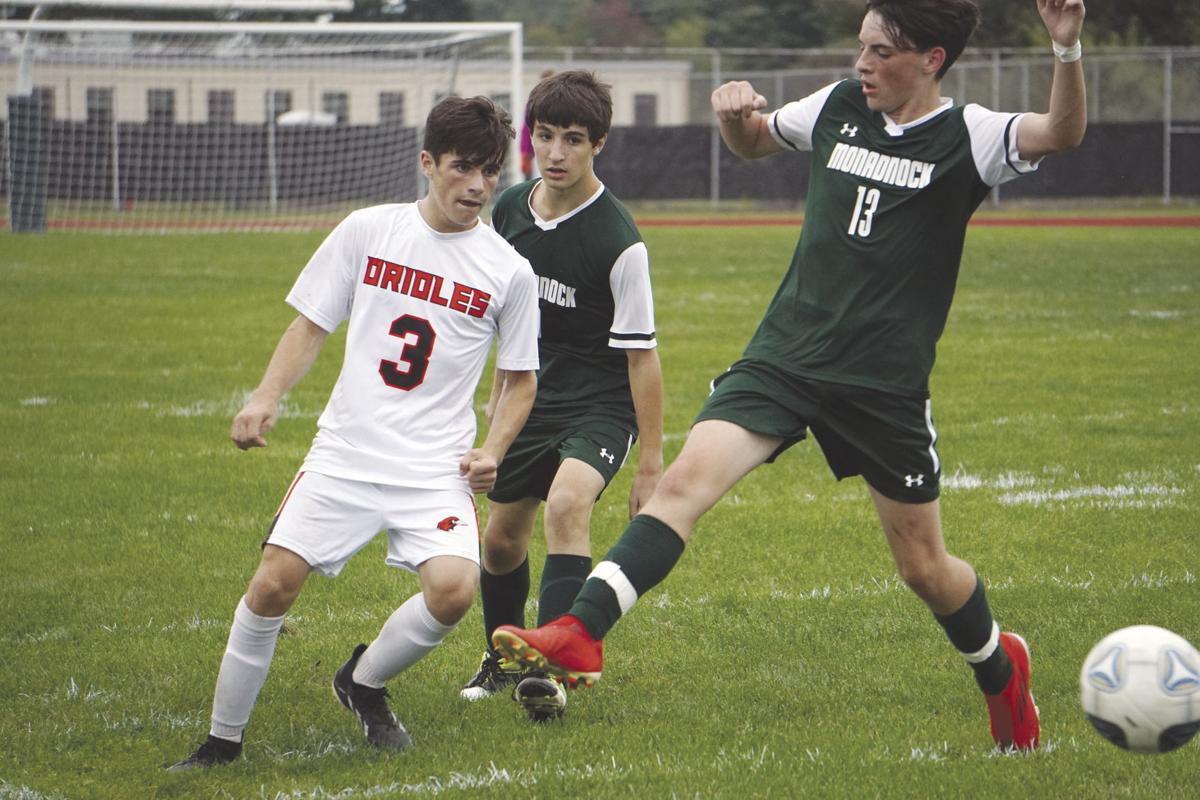 SWANZEY — Freshman Ben Sawyer broke the scoreless tie in the 50th minute, then scored again in the 55th to put the Conant boys soccer team over Monadnock, 4-0, Thursday in Swanzey.

Senior Noah Mertzic and sophomore Tom Harvey both scored as well for the Orioles.

All the scoring came in the second half.

“The first half, once again, we came out slow,” said Conant head coach Tom Harvey. “I think the boys played much better in the second half.”

Conant was missing two senior leaders — Ethan Vitello and Austin Poikenon — who were competing in a cross country meet Thursday, which affected the team dynamic on the field.

“I think it hurt us not having them out there talking,” Coach Harvey said. “It was a different look for these kids.”

Both teams created good looks at the net in the first half, but both goalies made the necessary stops to keep the game scoreless through the first 45 minutes.

“I think [Monadnock] played their game in the first half,” Coach Harvey said. “We didn’t really play with any physicality.”

Monadnock’s best look came in the 33rd minute, when Mason Hill placed the ball for, Gavin Gomarlo streaking down the near side of the pitch. Once Gomarlo pushed the ball down towards the net, the Huskies swarmed and got the ball on goal.

Conant senior Garrett Somero made the stop and Monadnock got a corner kick, which went wide.

A few minutes later, Mertzic created a scoring chance of his own — almost breaking away from the Monadnock back line — but Ryley Kirker made a the necessary defensive play to stop Mertzic in his tracks.

Conant continued to push the net in the final minutes of the half but saves from Monadnock senior Owen Manlove — filling in for Lucas Smith in net — kept it scoreless at the half.

“Our substitute goalkeeper did a great job for us today,” said Monadnock head coach John Naso. “Not his normal position. Owen is a striker with Georgios [Pananas], and that changed up our formation a little bit. We had to attack more centrally.”

In the second half, the Orioles picked up right where they left off, though, keeping up the pressure on Monadnock’s defense until Ben Sawyer found the opposite corner of the net in the 50th minute to give Conant a 1-0 lead.

Monadnock’s Georgios Pananas almost had the equalizer a minute later after a quick steal deep in the Monadnock offensive zone but couldn’t get enough of a foot on the shot to challenge Somero.

In the 54th minute, the Huskies again had a chance to tie, with Anthony Poanessa and Austin Capen getting the ball to the net one after another, but Somero held tough between the pipes to preserve the Orioles’ lead.

“Garrett has been really good for us,” Coach Harvey said. “He’s a strong player and a leader.”

On the ensuing possession — as if in response to Monadnock’s offense gaining momentum — Sawyer doubled Conant’s lead with his second goal of the day.

“We’re very excited about Ben,” Coach Harvey said. “He has yet to really find his stride here, but I think it’s coming around more. He’s a strong player and he’s a young player. It’s going to be really good to have him for a few years.”

The score stayed 2-0 for a while, although Conant controlled the pace for much of the second half. Then the Orioles took away any chance of a Monadnock comeback with two quick goals in the 80th minute — the first from Mertzic, off the foot of Sawyer, and then Harvey followed up with his own to make it 4-0.

“This was not the final result we wanted, but there were definitely things we can take away from this,” Naso said.

These two teams played earlier this season, at the end of August, with Conant coming out on top, 5-0. But Naso was impressed with how his team improved since that first matchup.

“The last time we saw those guys, in the first 15 minutes they were up on us like 4-0,” Naso said. “We tried to attack differently than last time, and it worked well. It was 0-0 at halftime and that’s a victory in our book. Those guys are really good. Second half, we came out with intensity, but they came out with more.”

There was a reason for that increased intensity, Coach Harvey said.

“At halftime, [Garrett Somero] had some choice words for his teammates,” Coach Harvey said. “I think they listened.”

Monadnock (0-6) has another quick turnaround, hosting Derryfield (2-3) Friday at 4 p.m. Naso wasn’t sure whether or not Lucas Smith would be ready to resume his role as goalkeeper in Friday’s game. If Smith is not ready, Manlove will again play between the pipes.

“That’s going to be another battle,” Coach Harvey said. “But I think we’re in the right place this year. I’m excited about how the season looks for us.”