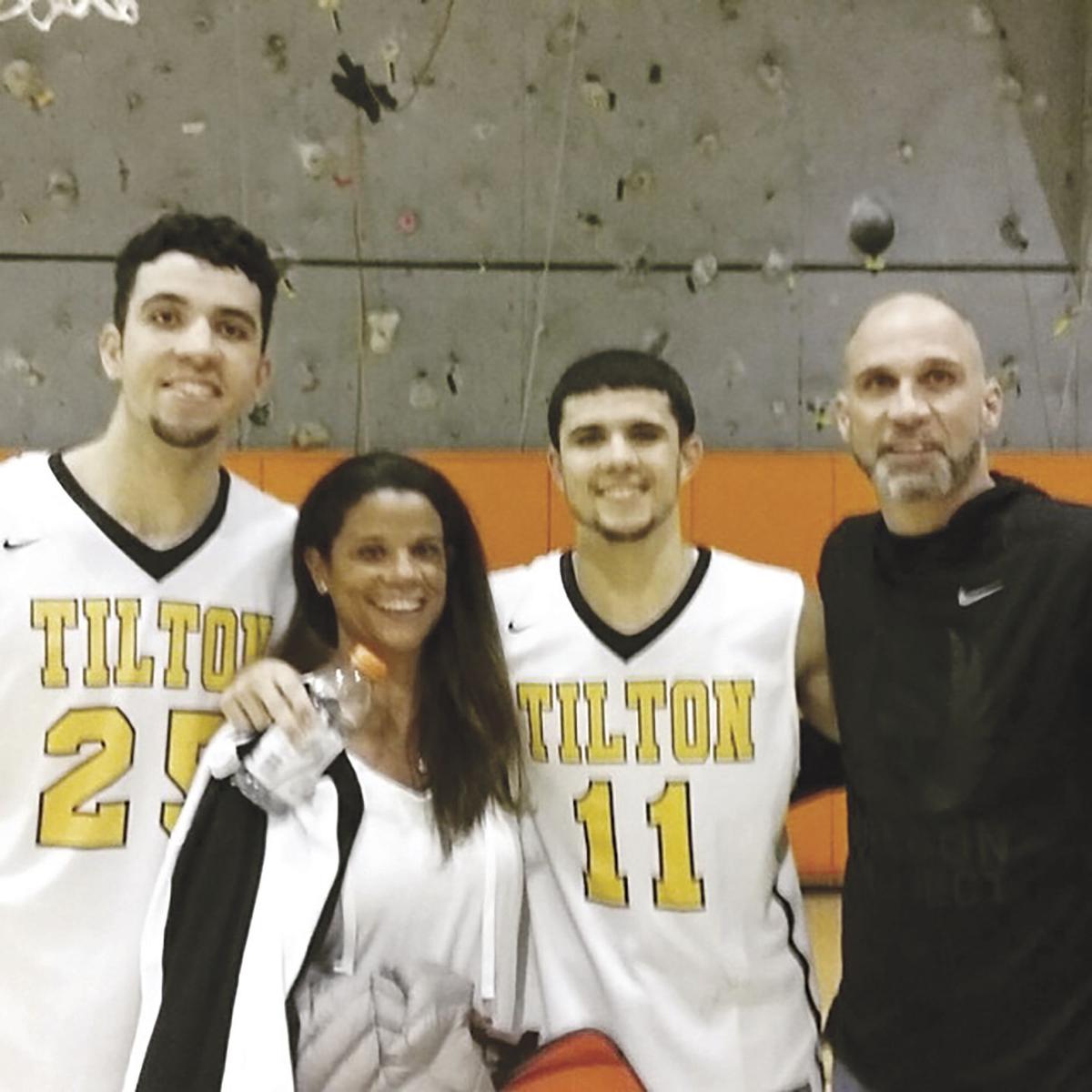 Max Zegarowski, left, and twin brother Marcus, middle, with their mom and dad after earning a championship at Tilton School during their senior year. 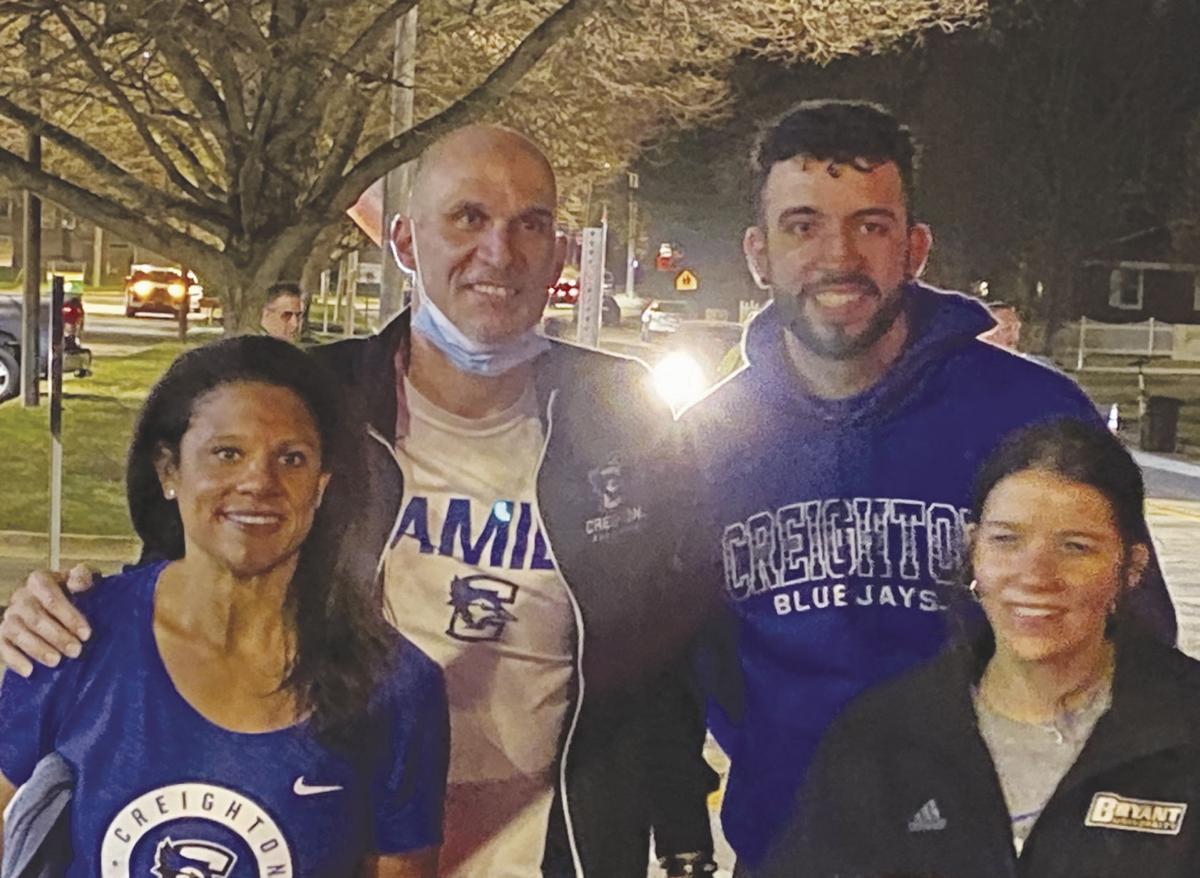 Max Zegarowski, second from right, with his mom, dad and sister in Indianapolis

during the 2021 NCAA men’s basketball tournament.

Max Zegarowski, left, and twin brother Marcus, middle, with their mom and dad after earning a championship at Tilton School during their senior year.

Max Zegarowski, second from right, with his mom, dad and sister in Indianapolis

during the 2021 NCAA men’s basketball tournament.

Back in March, toward the end of the severely-shortened Franklin Pierce men’s basketball season, junior Max Zegarowski, a starter for the Ravens, asked his coach and teammates if he could miss the final scrimmage of the season.

It’s not that he didn’t want to play — on the contrary — but he couldn’t say no to a once-in-a-lifetime opportunity to travel to Indianapolis to see his twin brother, Marcus, compete in the NCAA Men’s Basketball Division I Tournament.

Marcus Zegarowski cemented himself as a key piece of the starting five for the Creighton University Bluejays, a five-seed in the tournament. The Bluejays made it to the Sweet 16 before falling to eventual-runners-up, Gonzaga University.

And Max was in the stands the whole time, cheering on his twin brother.

And Marcus shined on the national stage, averaging just under 19 points in each of the Bluejays’ three games, including 19 points in the loss to Gonzaga, the number-one-ranked team in the nation.

“It was special for me to watch him play,” said Max. “I’m so happy for him that he played so well in March Madness. He’s my twin brother, there’s not much of a closer bond than that.”

And they’ve been close forever, said Mandy Zegarowski, the twins’ mom, who also traveled to watch the tournament.

The two shared a room growing up, they were teammates up until college — even winning two championships together in high school — and they always had each others’ back.

It made the trip to Indianapolis that much more special.

“Max and Marcus have always been super close,” Mandy said. “Going different places for college was tough in the beginning, so when Max was able to go [to March Madness] with the support of his teammates and coach … Marcus was just really happy.

“I feel like [Marcus] even tends to play well knowing Max is there,” she added. “With COVID and them being isolated, to look up in the stands and see Max, I know Marcus had said it was pretty special.”

Although the Zegarowskis could not see Marcus in person because of COVID protocols, Marcus made sure his family knew how much they were appreciated throughout the tournament.

“Marcus saw us in the crowd, he pointed at us a couple times,” Max recalled. “I remember after the second win [against Ohio University] he got up on the table after the game and was pointing to us. … It was just a fantastic time.”

And the family made sure Marcus could hear them from the stands, Max said, adding that they were one of the loudest families in the crowd, to the point that they got the attention of the referees.

But the trip never would’ve happened for Max without support from his teammates and coaches at Franklin Pierce.

“They were cheering for me and Marcus at the game,” Max said. “They were watching every game. I felt really supportive here and I just want to say thank you to my coaches and my teammates.”

Marcus’s future is still a bit uncertain, although Max said he is considering declaring for the NBA Draft. Whatever Marcus decides, one thing is certain:

“I can’t wait to see what Marcus will do in the future, and I’ll be right there with him,” Max said.