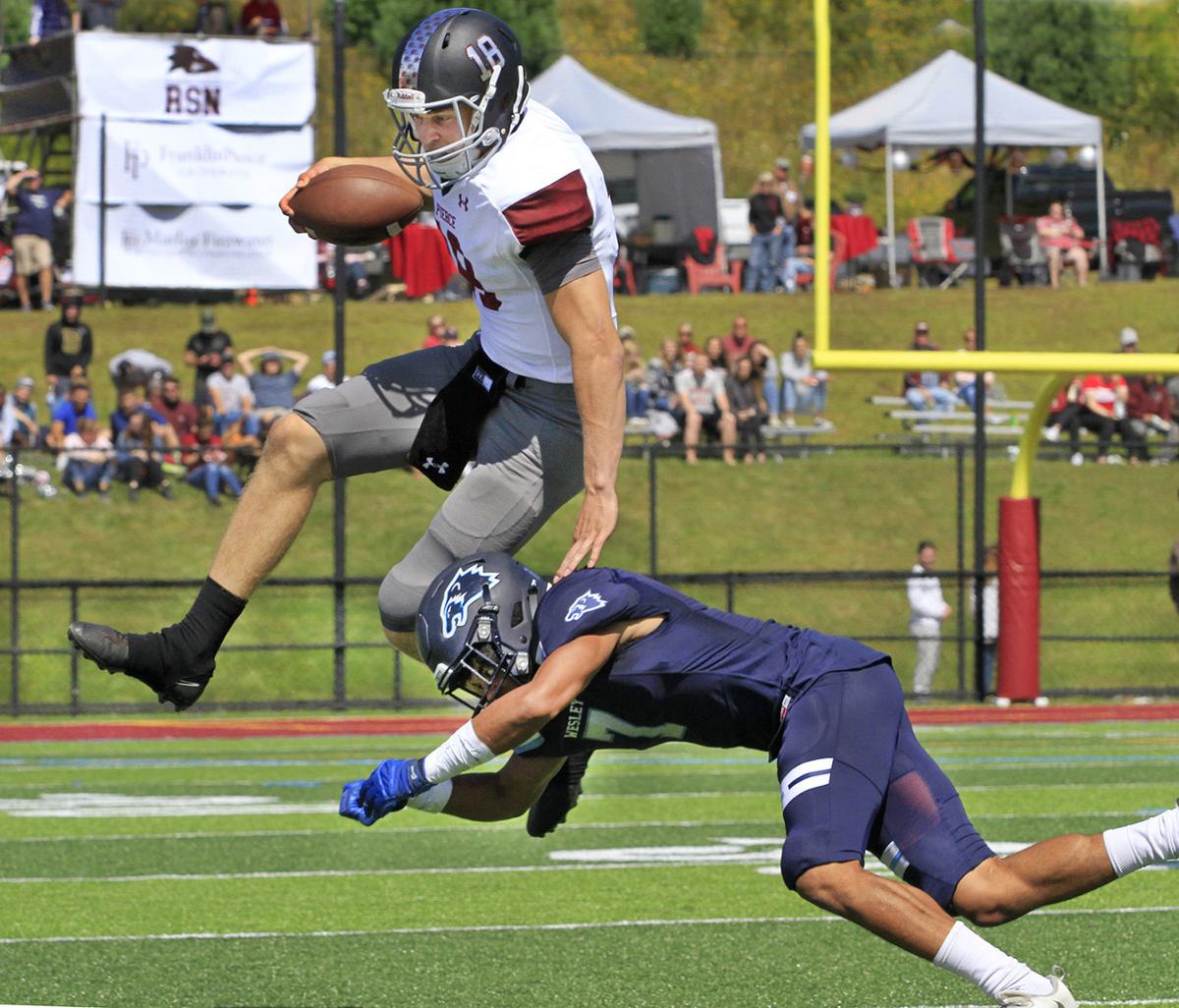 Franklin Pierce quarterback Dylan McDermott leaps to avoid a tackle while trying the run the ball vs. Wesley on Saturday. 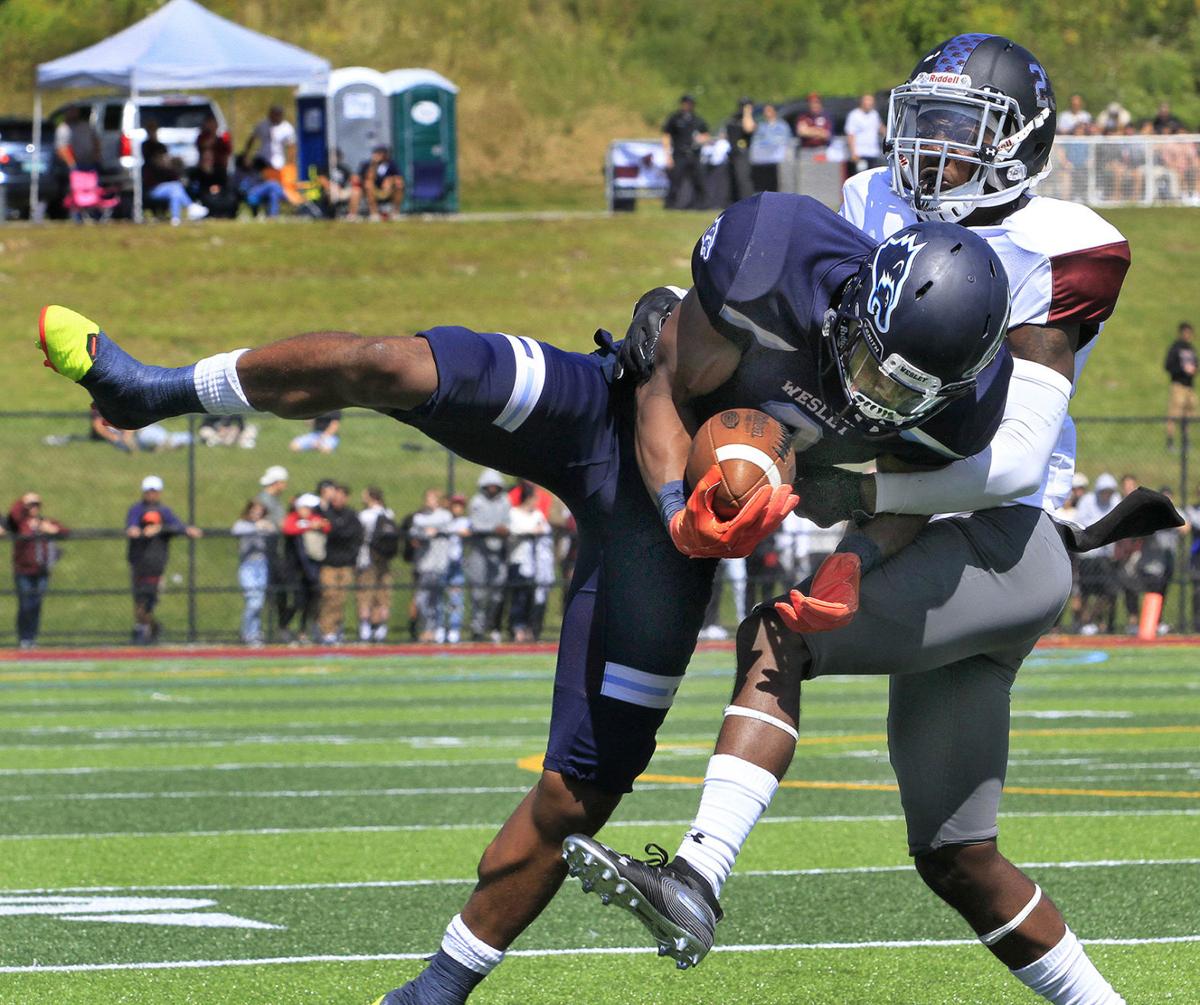 Franklin Pierce’s J.J. Johnson couldn’t keep this Wesley receiver from pulling in this pass on Saturday.

Franklin Pierce quarterback Dylan McDermott leaps to avoid a tackle while trying the run the ball vs. Wesley on Saturday.

Franklin Pierce’s J.J. Johnson couldn’t keep this Wesley receiver from pulling in this pass on Saturday.

RINDGE — Just a minute and 13 seconds into their inaugural Division II season, the Franklin Pierce Ravens were forced into a safety by Wesley College after the opening kickoff pinned them inside their own 10-yard line.

It was the start of what would be a tough introduction into Division II play for Franklin Pierce — a 69-0 drubbing.

Wesley, a Division III program, had more than enough experience and talent to push around Franklin Pierce, which a year ago was playing Sprint Football.

And first-year Ravens Coach Russell Gaskamp said learning from losses like this one and taking baby steps forward will be the key for this young team, which consists mostly of newcomers to the program.

“We have such a young group of guys. Literally just seven players are upperclassmen,” said Gaskamp. “It’s going to be a long work in progress but we are going to build this team up. Our guys had the right attitude throughout the course of the entire game.”

The Wolverines put up a pair of touchdowns in the first quarter on two passes from David Marrocco to Ruhann Peele — one from 23 yards out, one from five.

Wesley ended the first quarter and started the second with an 11-play, 80-yard drive that ended in a 10-yard touchdown run by Abe Mansaray and sparked the true offensive explosion.

The Wolverines added nine points in each of the remaining quarters, using two running touchdowns — one from 50 yards by Xavier Drummond in the third quarter, and one from 5 yards by Leroy Pendleton in the fourth — and a pair of 24-yard field goals by Nick Bruhn to round out the scoring.

It was a harsh introduction to the Northeast-10 Conference’s newest member, especially in the trenches. Whether it was freshman Dylan McDermott (2-of-4 completions, 11 yards, one interception) or fellow rookie Drew Campanale 1-of-5, four yards) at quarterback, Franklin Pierce’s O-line struggled to provide adequate pass protection and could not generate holes for the running backs. Franklin Pierce had a net of 26 total yards for the game, amassing 15 pass yards and 11 rush yards.

The team’s defensive line didn’t fair much better. The Ravens’ defense gave up 297 rushing yards and 544 yards in all. Wesley simply dominated from start to finish, never letting up on the gas pedal.

A few bright spots for Franklin Pierce were running back K.O. Gaskin, punter Harchdy Souffrance and defensive back Ishmael Johnson.

Gaskin was the team’s leading rusher with 10 carries for 16 yards. Called upon to punt the football 11 times, Souffrance sent the ball downfield for 341 total yards with a 28.5 yards per punt average. Johnson piled up a team-high 10 total tackles, four unassisted.

“The great thing is these guys want to bounce back,” Gaskamp said. “They want to get back on the practice field immediately and get ready for next week. And a football team always has its most growth from Week 1 to Week 2. Every team I’ve ever coached has been that way.”

If nothing else, the atmosphere for the Ravens’ first Division II home contest at Sodexo Field was a plus. The game had an official attendance of 1,675, more than double the amount of last year’s first two home games combined.

“The fans came out, they were great today,” said Gaskamp. “Obviously we didn’t play very well, but they stuck it out. They were very supportive.”

The larger hope, he said, is that the team is able to create a family-friendly environment for the community that will extend to the whole Monadnock Region. Toward that end, the university has already set up a tailgating section and has organized a band to play on game days.

Gaskamp exclaimed, “We want to make this an atmosphere that people know they can come out and have a great time on Saturday and enjoy the pageantry of college football.”

Franklin Pierce next takes on Curry College Saturday at noon in Rindge. Game-day information and tickets are available at fpuravens.com.