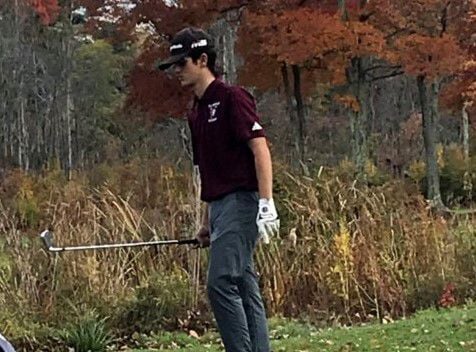 Mitchell during the first round of the NHIAA Division III golf tournament in Derryfield Country Club on Oct. 20. 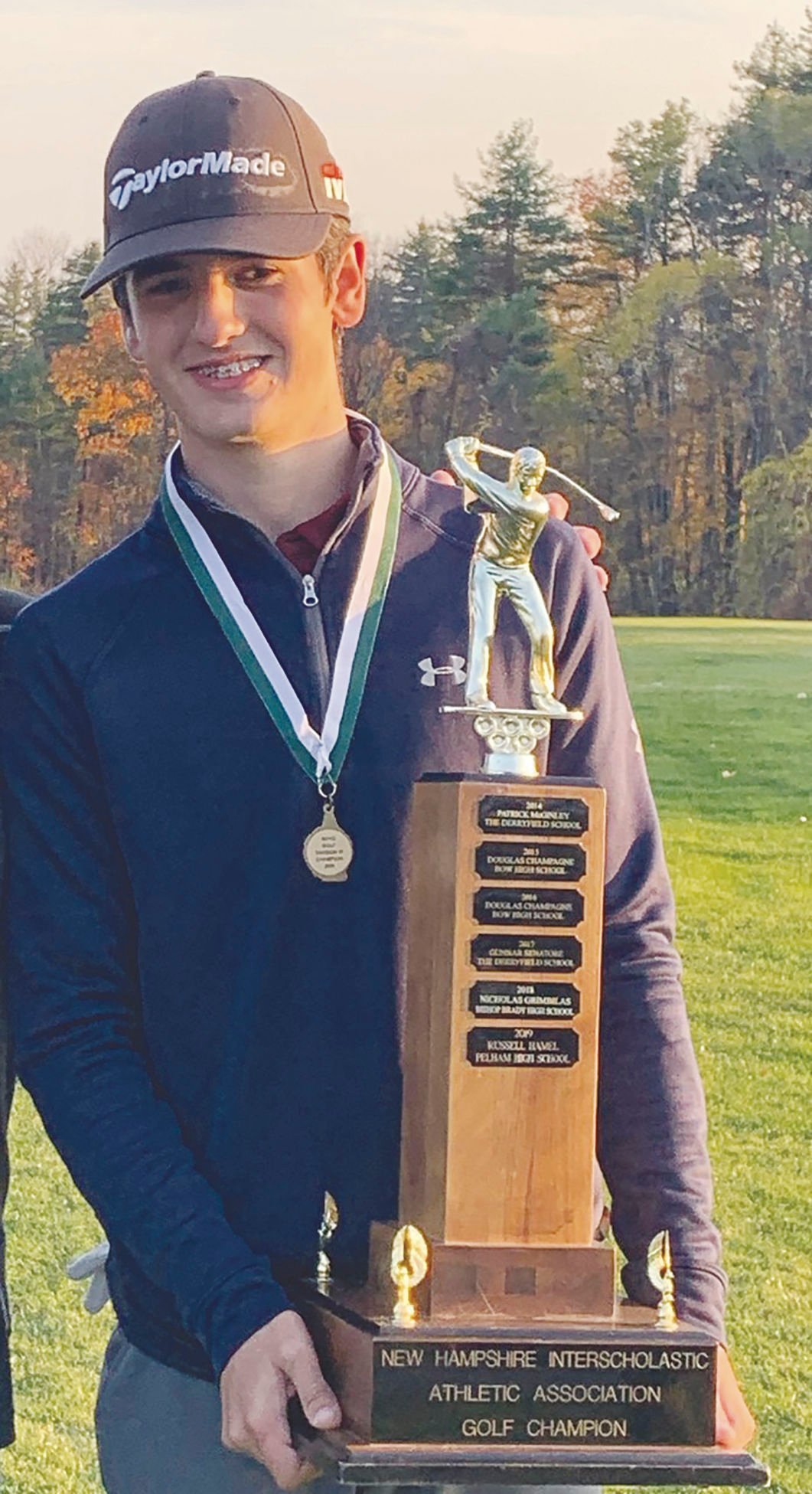 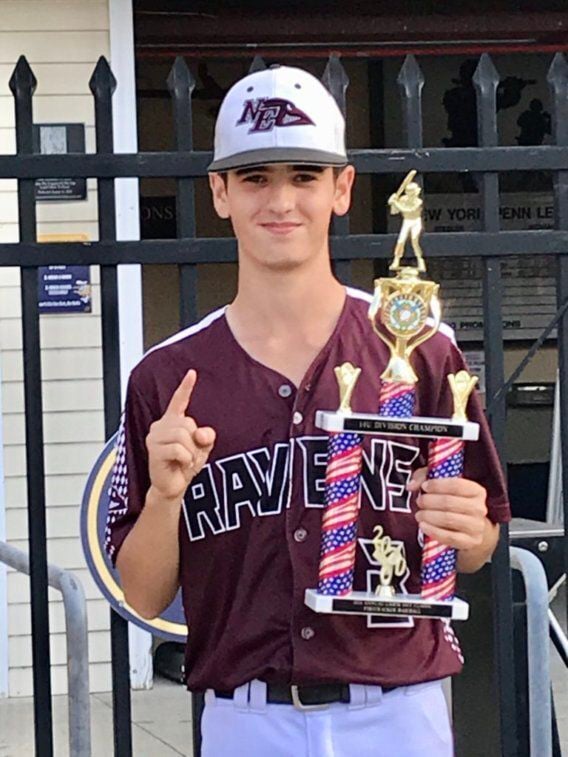 Mitchell helped the Ravens win the Firecracker Labor Day tournament in Norwich, Connecticut in Sept. He pitched seven innings in the championship game. 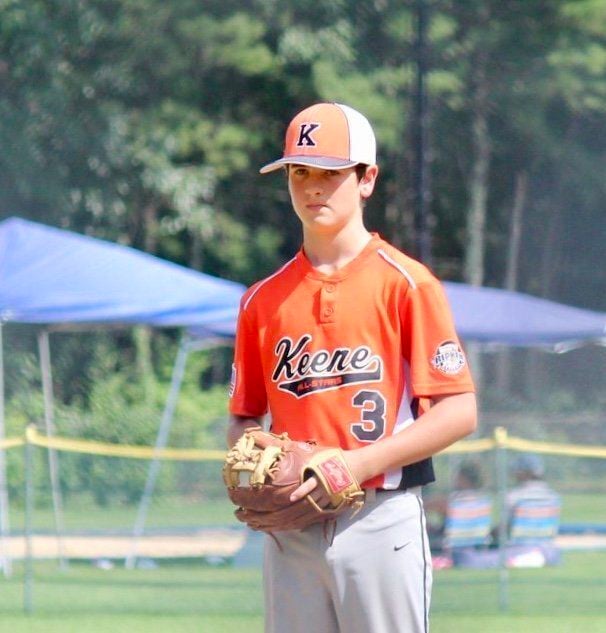 Mitchell Cormier with the Keene All-Star baseball team in 2018. 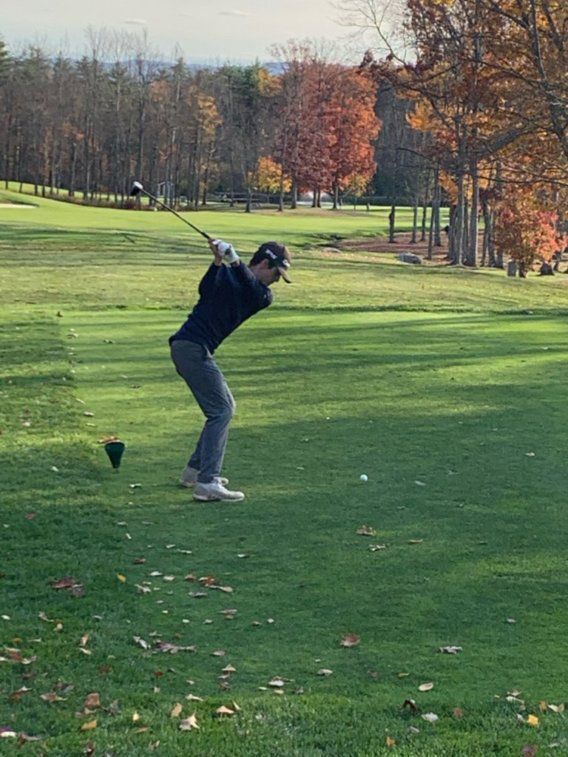 Mitchell swings in the second round of the NHIAA Division III golf championships at Concord Country Club on Oct. 25.

Picture this: It’s the fifth hole of the final round of the 2020 NHIAA golf championship on Oct. 25 at Concord Country Club. Fall Mountain’s Mitchell Cormier is in second place but has just bogeyed his first four holes — which puts him three strokes out of the lead.

His drive on the fifth hole goes into the woods.

“I was a little flustered, but I knew all I had to do was make par and get on a streak,” Mitchell said.

And that’s exactly what he did.

“He took his time, he didn’t panic,” said Lance Cormier, Mitchell’s dad. “He chipped it out and put it on the green for par.”

That par was a turning point in Mitchell’s game that day.

“It definitely was (a spark). It was a momentum-booster,” Mitchell said. “Once I did that, I knew I could start to come back a little bit.”

By the ninth hole, Mitchell was down by five strokes, but by the 18th, he had secured the Division III state championship by two strokes.

“I remember the last putt; I was very nervous,” Mitchell said. “Probably one of the only times I was nervous all day.

“It really didn’t set in that I won until two or three days later,” he added.

Oh, and he’s only a sophomore.

“He’s won the ultimate prize at the state level as a sophomore, so that’s pretty amazing,” said Fall Mountain head coach Jason Lintner. “You could see it in the faces of the other coaches — like, ‘Wow, you have him for two more years.’

“Other kids would give up. He hit four bogeys — and it was cold — and on the (fifth) hole he hit it into the woods. And he somehow got it on (the green) on his third shot and parred the hole. He just keeps playing hard and good golfers do that. He gets it.”

The state championship earned Mitchell the 2020 Player of the Year and also a first-team All-State bid.

“He’s definitely a kid that works very hard,” Lance Cormier said. “He practices almost every day. This was a goal of his; he wanted to win that day. And I think he worked hard enough to do it.”

The day after winning the state championship, Mitchell was already back outside hitting balls — in the rain, his mom, Joni Cormier, said.

With the championship comes an invitation to the High School Golf National Invitational at Pinehurst Resort in Pinehurst, N.C. The Invitational includes golfers from nearly all 50 states and invites only the state champion teams and individuals from each state. The tournament will take place on June 28-30, 2021. It’s a 54-hole event.

“These will be the top kids in the country, so he’ll really be able to compare himself with them,” Lintner said.

Mitchell said his goal at the tournament is to break 80 on each of the three rounds.

“I’m looking forward to playing with a bunch of kids from all over,” he said.

Mitchell started playing golf when he was 5 or 6 years old. He’d watch his dad play, and eventually got to join him on the course.

“He’s always played a lot of sports and golf is something you do in the summer in the afternoon,” Lance said. “When no one was on the course, he could go play and he got pretty good pretty quickly.”

So good, that both his dad and coach say he can play better than them.

“When we go out for an afternoon round, I don’t need to show him much; he sometimes golfs better than me,” Lintner said.

“Right now, golf is really important to Mitchell,” Lintner added. “He putts, he practices — there’s not much I can show him.”

It all comes down to a love and passion for the sport that has been part of his life for so long.

“I really have fun playing,” Mitchell said. “It’s really all about having fun. That’s why I love to go out with friends all the time, practice with them, play matches with them. That helps me, because I enjoy it so much.”

“I know he loves the game,” Lintner said. “He really enjoys playing. He puts in the time and effort.”

Mitchell also excels at baseball. He was a member of the Keene All Star 12U and 13U teams in 2018 and 2019. Both teams captured a state championship.

He also plays Amateur Athletic Union (AAU) baseball for the New England Ravens. In 2019, he helped pitch his team to its first New England championship, throwing a four-hit shutout in Game 1 of the three-game championship series.

Balancing between the two sports can be challenging; swinging a golf club and swinging a baseball bat are two very different motions. Mitchell finds success by focusing on one sport at a time, whichever sport is in season.

This year was a bit different. With no baseball season in the spring and summer, Mitchell was more focused on his golf game.

“This year was probably the most golf I ever played, considering I didn’t have baseball,” Mitchell said. “When I do have baseball, I really don’t play much golf.”

“After baseball season was done, I probably did not swing a baseball bat for three months,” he said.

Mitchell said the long break between sports affects his golf swing more than it does baseball.

The key to all this success? His dad thinks it’s Mitchell’s ability to keep his composure during competition.

That composure doesn’t only affect Mitchell’s game, but his opponents’ game as well — especially during the golf state championship when Mitchell struggled out of the gate.

“It definitely may have affected his opponent because he struggled in the beginning, but you really wouldn’t have seen it from his body language,” Lance said. “I think once he started to make a comeback, same thing. He didn’t get too excited. He played the smart shot every single time.I think that’s really how he walks through it in his mind.”

His parents are, of course, proud of all of Mitchell’s athletic accomplishments, but it’s the off-the-field character that his mom is most proud of.

“He is a respectful and kind person,” Joni Cormier said. “I most enjoy when a coach, parent or stranger gives that type of compliment about Mitchell.

“I think golf has been a great influence as it is fundamentally about honesty, patience and etiquette. Baseball has taught him teamwork, resiliency and controlling his emotions. It is pure joy to watch him grow as a player in both sports and as a young man,” she added.

As for the future — who knows? Mitchell still has two more years of competition at the high school level, and then he said he hopes to continue competing in college.

“It’s golf or baseball for me, hopefully one of those sports,” Mitchell said.

Until then, he’s going to keep working at getting even better and having another successful athletic season in 2021.