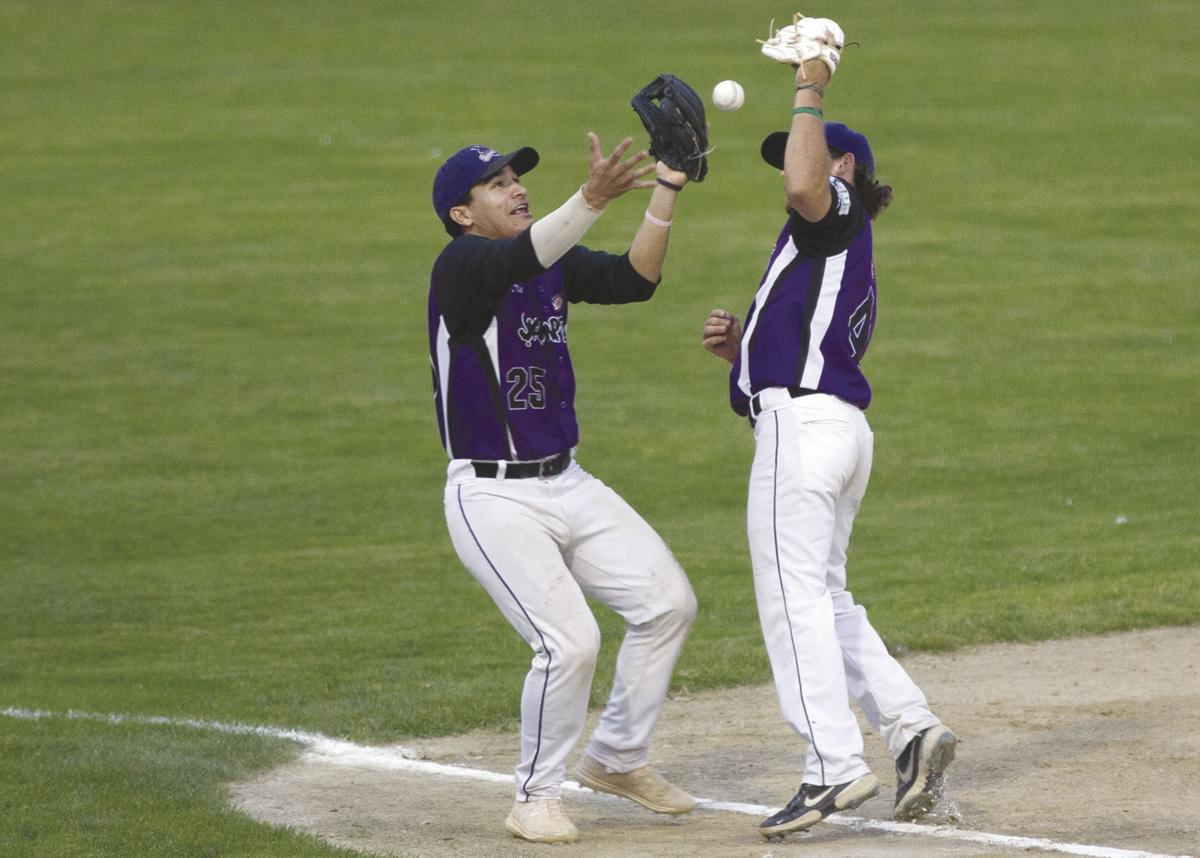 Keene SwampBats Ronny Medina (25) and Zach Bushling (4) run into each other while going after a pop fly during Game 1 of the Northern Division Semifinals against the North Shore Navigators on Wednesday at Alumni Field. 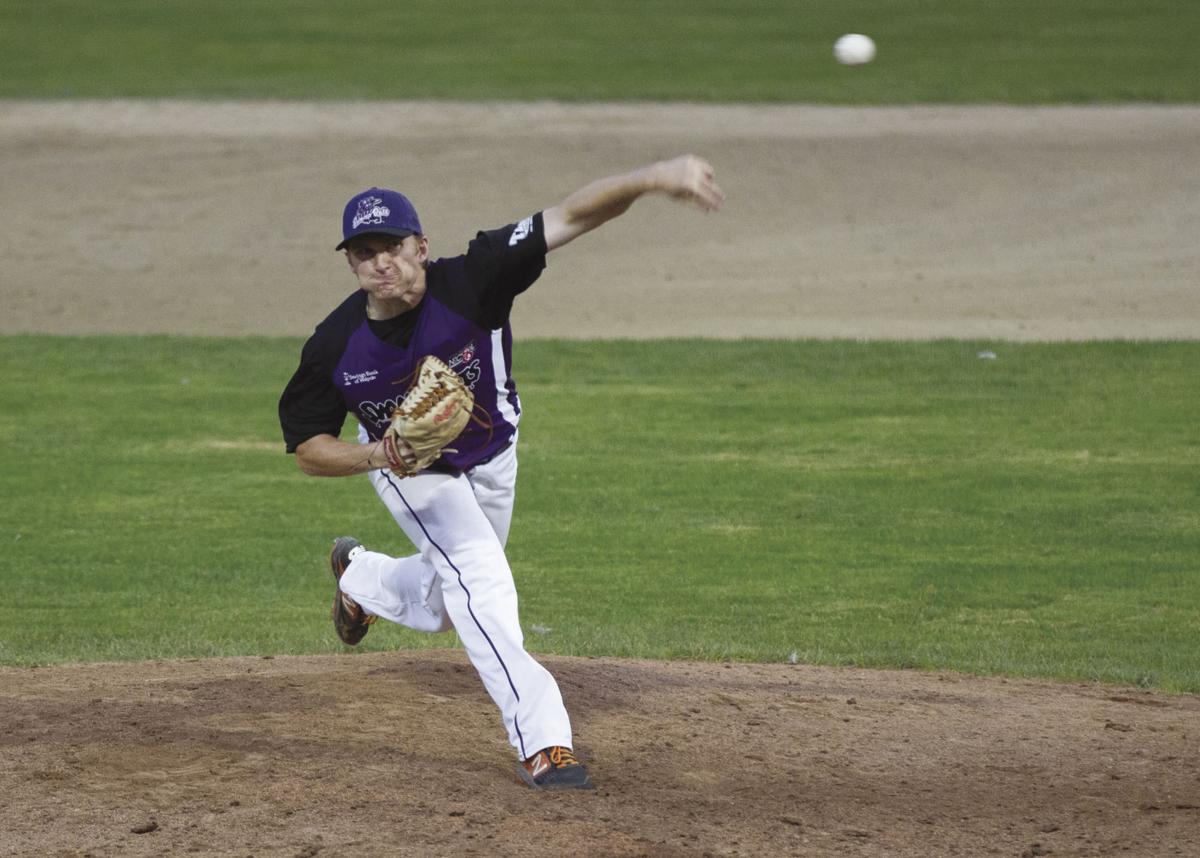 Zach Davidson (1) pitches for the Keene SwampBats during Game 1 of the Northern Division Semfinals against the North Shore Navigators on Wednesday at Alumni Field.

Two errors in the top of the sixth inning gave the North Shore Navigators a tight window of opportunity to take the lead over the Keene SwampBats in Game 1 of the NECBL Northern Division Semifinals.

Matthias Haas singled in the sixth to score Lucas Bravo after the inning was kept alive by two errors. The run gave the Navigators a 2-1 lead over the SwampBats Wednesday night at Alumni Field — and that score held the rest of the way.

“You hate to lose a game like that,” said Keene manager Shaun McKenna. “And unfortunately, that’s how we lost the game. But you move on. Have to move on to the next day.”

Bravo reached base with two outs in the inning after a miscommunication between Zach Bushling at shortstop and Ronny Medina at third base on a routine pop-up that would’ve ended the inning had the play been made.

Then Joseph Lomuscio reached after Medina bobbled a ground ball and, again, the inning that should’ve been over stayed alive.

“You have to be clean this time of year, and unfortunately for one inning we weren’t clean,” McKenna said.

Keene starter Zach Davidson’s night was over after the second error.

Lenny Washington came on with runners on first and second and gave up a single to Matthias Haas, which gave the Navigators the lead, but got out of the inning after Joseph Lomuscio was caught in rundown between second and third and was tagged out.

“We’re fortunate that … it was one run,” McKenna said. “They could’ve had more. Pitchers came in and did what they were supposed to do, we just didn’t make the plays.”

Navigators’ starter Luke Marshall used his nasty curveball to mow down the SwampBat lineup and throw a complete game — the longest outing by an NECBL pitcher this season — only allowing one run on three hits. He pitched five 1-2-3 innings, including striking out the SwampBats in order in the ninth inning.

“That’s the best feeling in the world,” Marshall said of striking out the side to end the game. “I was just trying to get ahead with strikes. I felt like I got better as the game went on.”

“That kid pitched really well,” McKenna said. “What are you going to do? He was really good. We knew what we were getting into. He’s had a good year. You have to tip your hat off.”

Davidson went toe-to-toe with Marshall for much of the game. Davidson pitched 5.2 innings and gave up just two hits, but also two runs (one earned). He struck out eight in the outing and at one point retired 12 in a row before giving up his first run in the fifth.

“I just felt really confident,” Davidson said. “Throw it down the middle and let them get themselves out.”

Washington got through the next 1.1 innings and had to leave after he was hit by a comebacker with two outs in the seventh. Washington finished the inning, then Grant Besser took over in the eighth.

Besser found himself with a runner on second with just one out, but struck out the next two batters to keep the deficit at just one.

Calvin Bickerstaff pitched a scoreless top of the ninth, but Keene’s offense couldn’t get anything going against Marshall — who emphatically walked off the mound after recording the final out — in the bottom half.

Keene’s only run of the game came on an RBI single from Ronny Medina in the fourth inning, scoring Troy Schreffler who reached base by hustling down the line on a ground ball and beating out the throw.

The Navigators tied the game in the top of the fifth, then took the lead in the sixth and never gave it up.

Game 2 of the series will be Thursday night at 6:30 p.m. at Fraser Field in Lynn, Mass. A Navigators win will advance North Shore to the Division Final. A SwampBats win will force a winner-take-all Game 3 at Alumni Field Friday.

Cole Stallings is scheduled to take the mound in Thursday’s elimination game.

“Our guys will be ready to compete,” McKenna said. “You have to move on.”