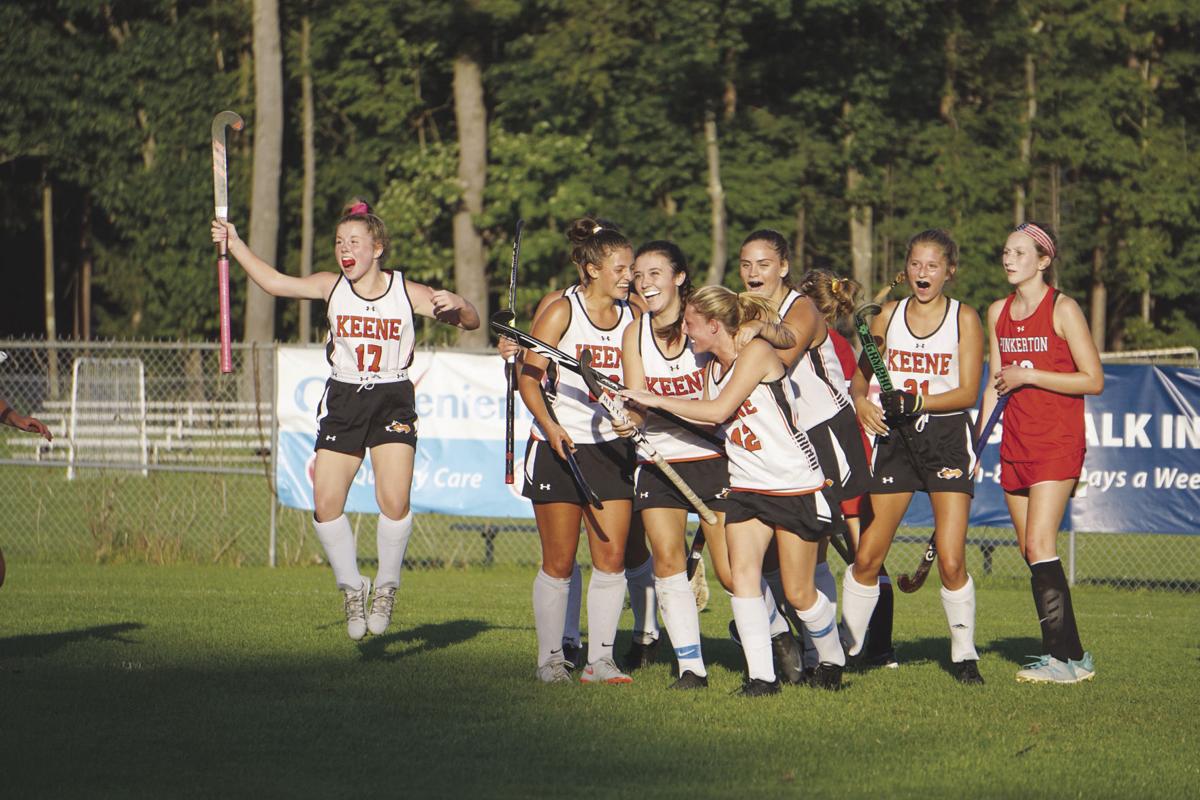 Keene juniors Kaylyn Trubiano (42) and Meghan Goodwin (17) celebrate after connecting for a goal late in the fourth quarter of Monday’s game against Pinkerton Academy. 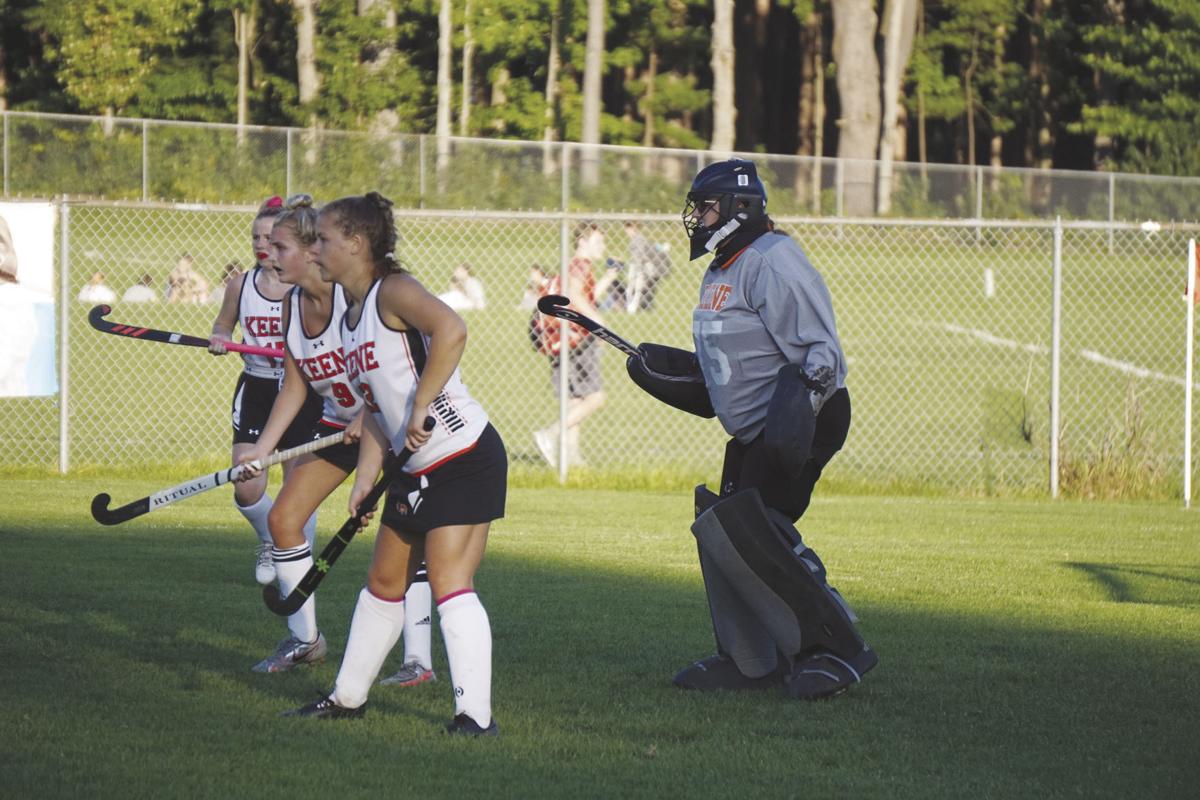 In what could be considered a “prove it” game for the Keene field hockey team, the Blackbirds felt like they proved it.

The group showed it can hang with top teams in Division I, fighting Pinkerton Academy (3-2-2) to an exciting 1-1 tie Monday afternoon in Keene.

“Our team this year came in thinking, ‘We know our job, just do our job. Just play the game.’ And I think they’re getting better at that,” said Keene head coach Michelle Tiani. “They used to be a little nervous because they’re very young. But they’ve worked so hard, and they play as a team. They’re positive, they’re having fun. It’s really nice to see.”

After a defensive battle for the first three-plus quarters of play, junior Kaylyn Trubiano broke through for the Blackbirds’ goal, giving Keene the 1-0 lead with just 3:26 left in the fourth quarter.

But Pinkerton responded with a goal not 1:30 later to tie the game, and despite a flurry of offensive shots for Keene in overtime, the 1-1 score stuck the rest of the way.

Defense was the name of the game for the first three quarters of action, with neither back line giving in to heavy offensive pressure.

Seniors Claire Stroshine and Meghan Ylitalo held strong on Keene’s defensive line, with freshman Avery Allaire stepping in nicely and keeping Pinkerton’s offense quiet despite the ball being in Keene’s defensive zone for much of the first half.

“They’ve definitely bought in to being a defensive team,” Tiani said. “And it shows.”

It wasn’t until midway through the second quarter that Pinkerton got its first shot on net, and junior net-minder Bella Venezia was there to make the stop — her first of eight on the day.

Keene’s defense was particularly strong towards the end of the second quarter when Pinkerton’s offense began to pick up, creating back-to-back corner opportunities at the end of the half. Venezia was there to make the stops and the half ended with goose eggs on the scoreboard.

“Bella is stepping up a little bit. She’s believing in [her defense],” Tiani said. “That confidence, that communication — they’re working very well together.”

Then Keene’s offense really got going in the third quarter.

Just two minutes into the second half, the Blackbirds finally got the ball past Pinkerton goalie Elise LeBlanc. Immediately, though, the referee called the goal back.

The play was blown dead before the goal because of a delayed penalty. The referee determined that Keene lost possession before scoring the goal, and therefore the Blackbirds were awarded a penalty corner rather than the goal.

“It happens,” Tiani said. “[The referee] thought we lost the advantage, blew the whistle and we ended up getting it back. It happens. It’s part of the game. Sometimes it goes in your benefit, sometimes it doesn’t.”

Even though it didn’t show up on the scoreboard, the goal still counted for something momentum-wise.

“That just showed us that we can score,” Tiani said. “We just had to do it again. You already did it. It didn’t count, but you did it. So, it was easier to come back and say, ‘We can do this.’ Just getting that first one, even though it didn’t count, made them realize, ‘We got this.’ ”

The momentum from that no-goal trickled down through the entire roster, all the way to Venezia in net, the junior said.

“A switch just flipped,” Venezia said. “It’s something I noticed in everybody. We all just started hustling once we realized we’re at these guys’ level. A switch flipped and I said, ‘I can do this. I can stop the ball.’ ”

And stop the ball she did, making a handful of impressive saves down the stretch, including laying out for a save towards the end of the third quarter to keep the game scoreless heading to the final frame.

Many of those saves, she said — especially with the game so close the whole way — just felt like “TV static.”

“Throughout my entire years of being a field hockey goalie, I can only remember snippets of big games like this,” Venezia said, admitting that she felt pressure from the game’s intensity. “I’m just so in the zone, it’s impossible to see or hear anything.”

The Blackbirds carried their momentum into the fourth quarter, berating Pinkerton with shots to the net and scoring opportunities, before Trubiano finally broke through to give Keene the late lead.

Pinkerton snuck one past Venezia just a minute later, and the game stayed tied throughout the 10-minute overtime period.

Especially after after having a year off from Division I competition because of last year’s regional schedule, Tiani said Monday’s game gives her — and the entire team — a better feel for where the Blackbirds stand in the big picture.

“This is a good barometer for us,” Tiani said. “It shows that we can compete in Division I when we didn’t get that last year.”

Keene (3-1-1) now starts a tough four-game road trip over the next nine days. The first two games are against two of the top three teams in the Division I standings as of Tuesday.

The Blackbirds travel to Winnacunnet (5-1, third place in DI) Wednesday before visiting Exeter (7-0, first place in DI) Friday then Salem (1-3-1) the next Monday, Sept. 20.