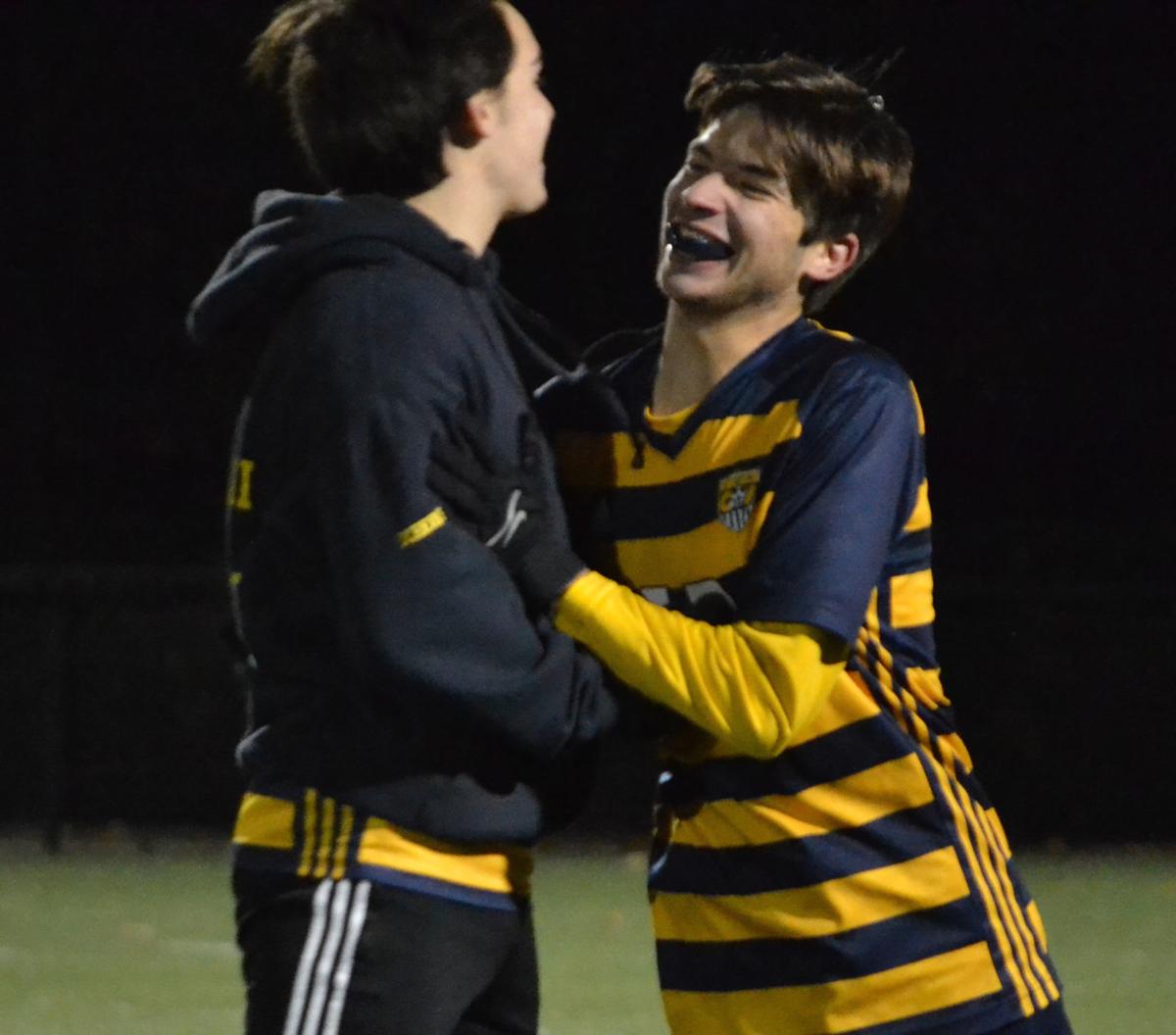 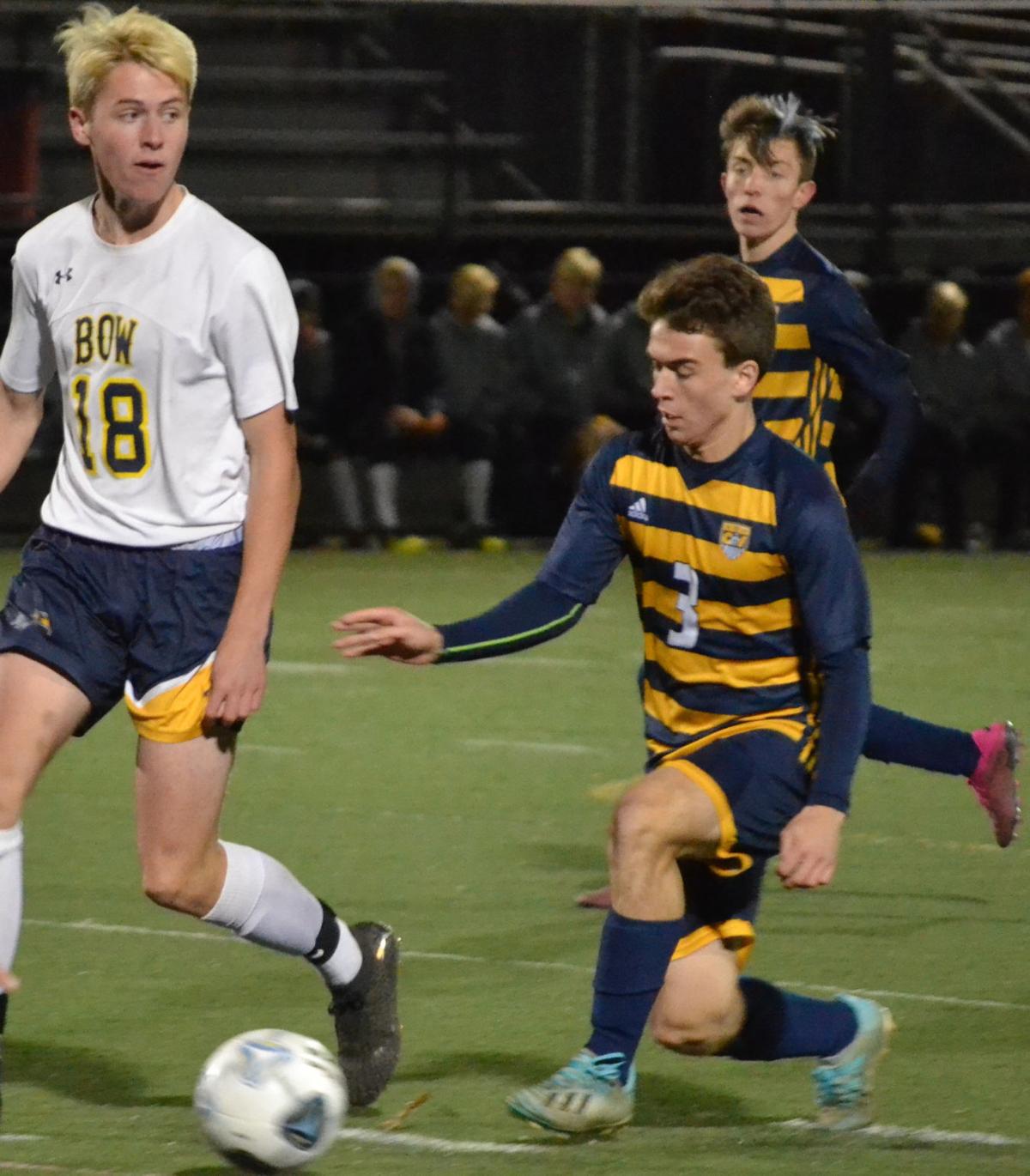 EXETER — Taylor Burgess has a habit of stepping up for the ConVal Regional High boys’ soccer team when it needs him most.

This year, following the graduation of offensive star Max Richard, Burgess was asked to step up again. On Wednesday night, he did just that.

The senior forward scored the lone goal in ConVal’s 1-0 win over fifth-seeded Bow in the Division II semifinals at Bill Ball Stadium, sending the top-seeded Cougars’ back to the state finals.

The defending champions will face No. 2 Lebanon — the only team to beat the Cougars this year — Saturday at 4 p.m. at Manchester Memorial High School, with the state crown on the line.

“It just shows all the work we’ve been putting in the last two years, the last four years — ever since we were little kids,” said Burgess, who is part of a large class of 15 seniors that is leading ConVal to glory again.

In a first half dominated by midfield battles and back-line stands made well outside the goalie box, Burgess’ score in the 10th minute was easily the biggest highlight.

Burgess started moving toward the box and signaled for a pass from Wegmueller, who responded by floating a picture-perfect ball over the Bow defense and into a spot where nothing could hit it but Burgess’ head. The ball flew into the back of the net with ease.

“We’ve done it before, where Finn has the ball on the wing, we make eye contact and we know exactly what we’re going to do,” Burgess said. “The practice, the years of playing together, we just executed that play perfectly and that’s all we needed to move on.”

With an early lead secured, ConVal focused on what it does best: play defense. The Cougars held the Falcons to two shots on net in the first half, both of which were easily corralled by senior goalie Mather Kipka.

“[Jordan] shut [Ferland] down for most of the game,” Kriebel said. “That limited their offense, and as you can see, it worked out.”

This marked the team’s 11th shutout through the regular and postseason, just two shy of last year’s total of 13.

“Our defense stood strong,” ConVal Coach Josh Smith said. “Communication was good. [The Falcons] move all around, a guy could be on the right and then switch to the left, so it’s tricky to defend that sometimes, so it was really important for us to stay communicative and just be strong in the back.”

The early stages of the second half continued much like the first, but as the game’s conclusion drew closer, the ConVal defense encountered a few scares. end.

The closest call came when a kick sent the ball into the outer rim of the box, and the ensuing scrum led to a shot by Bow that zipped past Kipka but bounced off the crossbar. The Falcons recovered the rebound, but the put-back shot floated harmlessly into Kipka’s arms.

The Cougars keeper made another big stop later in the second half, when a strong through pass gave Bow’s John Salerno a breakaway chance; Kipka slid in front of the streaking Salerno to halt his progress and knock the ball away. He then fell on the loose ball after it squirted out of his hands.

“We started straying away from our good soccer,” Kriebel said of the team’s second-half play. “We started trying to kick the ball as far as we can and then run onto it, which is not the way we play; we do better when we do short, little passes and connect with each other.

“But we did what we needed to. We played smart, we were everywhere we needed to be, so it worked out in the end.”

With another finals appearance in its grasp, ConVal faces a tough challenge on the road to its second straight title.

Last year, the Cougars edged the Raiders 1-0 in the state quarterfinals, a score that mirrored their two 1-0 victories in the regular season. This season, ConVal beat Lebanon at home 2-1 Sept. 6, but the Cougars lost to the Raiders on the road Oct. 23, 2-0.

That ConVal team in October was missing a few key players due to injury, such as senior midfielder August Marshall, so the roster should be quite different for the rematch Saturday.

And while the prospect of facing the only team to beat them might sound tough to most, the Cougars wouldn’t have it any other way.

“We’ve been talking about it ever since it was clear this was a two-team race,” Burgess said. “This is what we wanted — our rival from the past two years. It’s everything that we’ve hoped for from the season, so now we just have to perform on Saturday.”