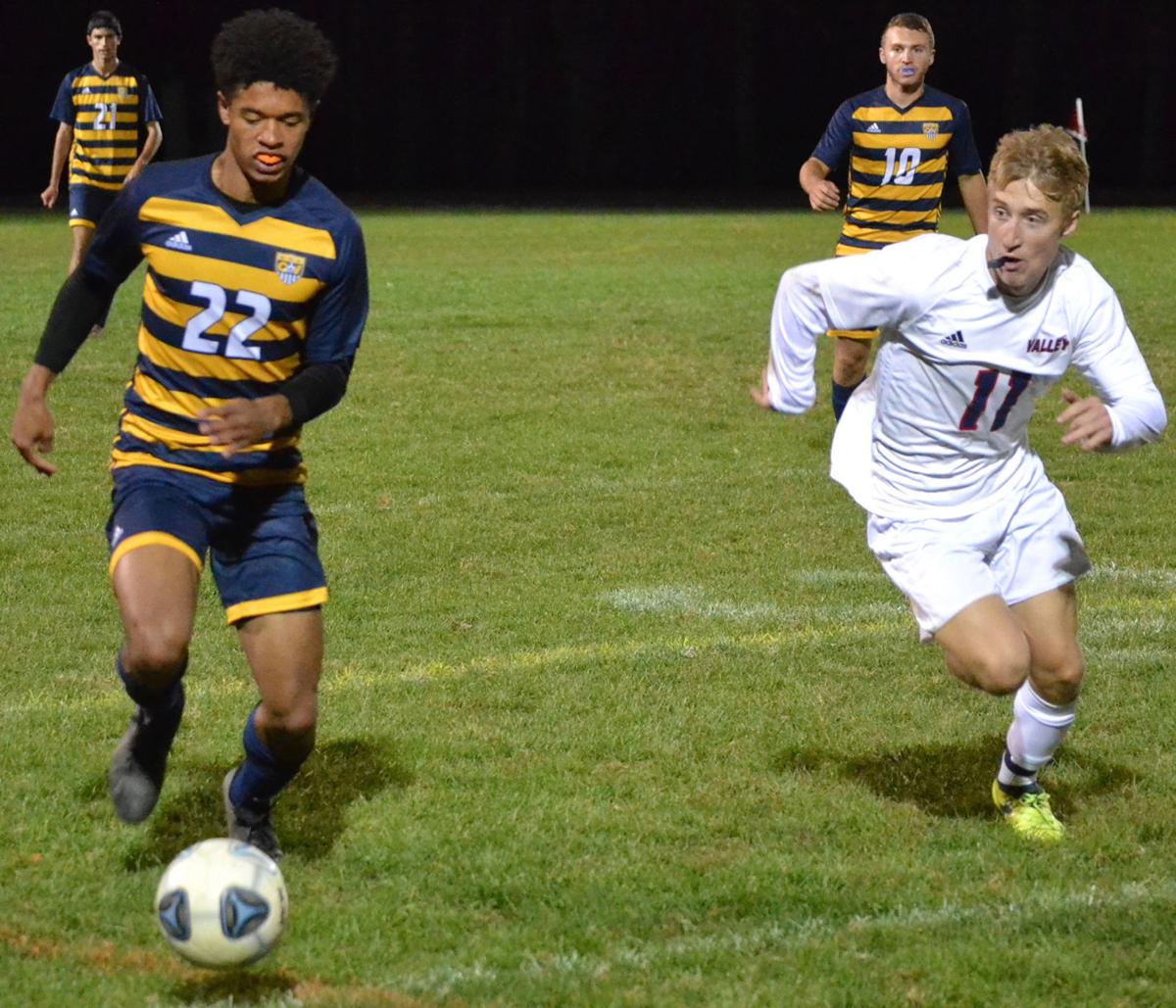 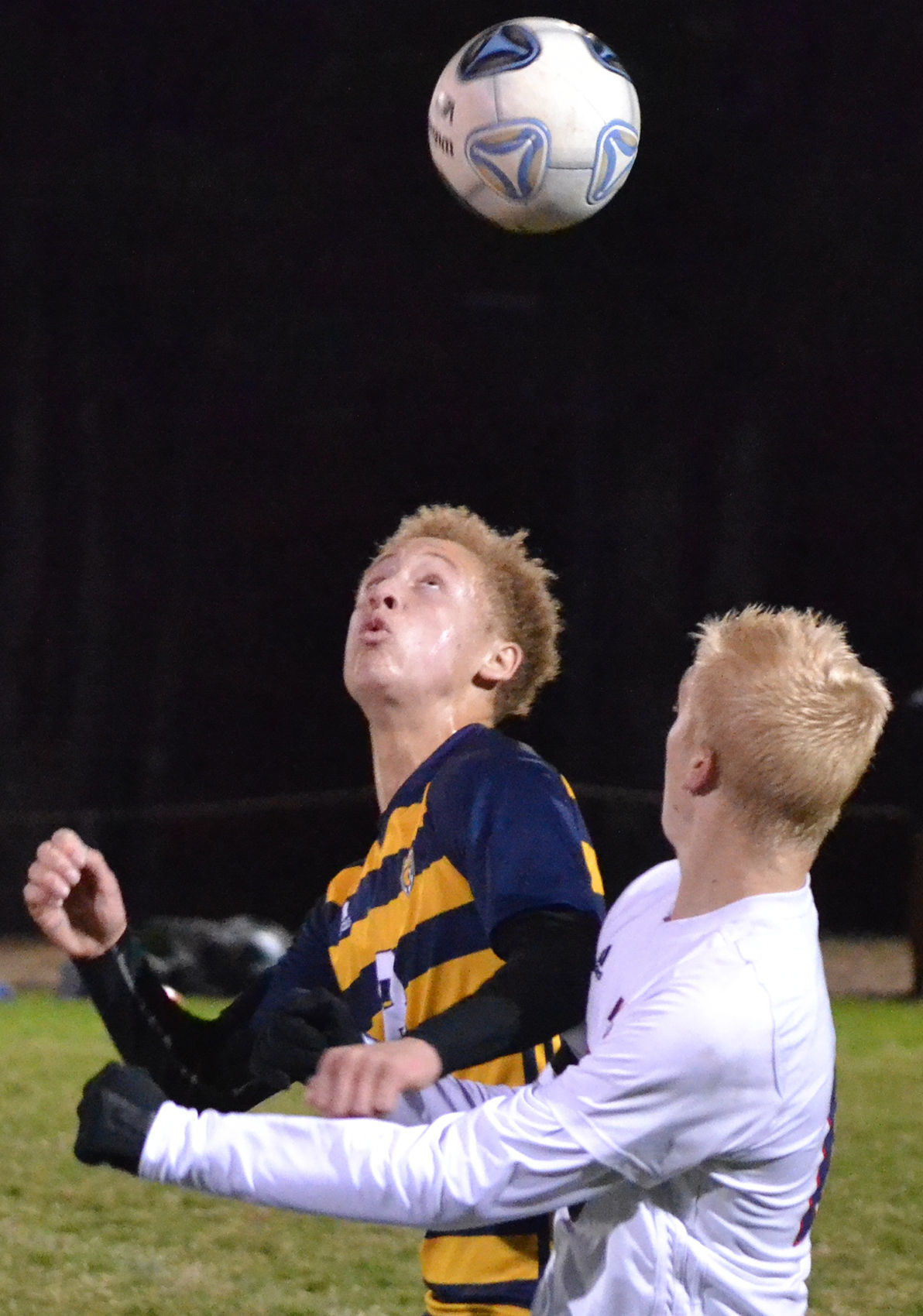 PETERBOROUGH — It’s a rare day when the ConVal Regional boys’ soccer team gives up a goal.

When Merrimack Valley’s Coby Mercier scored in the 54th minute of Thursday’s game, it was just the fourth goal the Cougars had allowed all season.

But the defending Division II champs showed why they’re in a strong position to make another title run.

Having taken a two-goal lead earlier in the game on goals by Del Bonsu-Anane and Taylor Burgess, ConVal was unfazed by the rare breakdown of its stalwart defense, and held on to beat the Pride, 2-1.

The Cougars maintained their spot as the No. 1 seed and only unbeaten team in Division II, improving to 10-0-1. Merrimack Valley fell to 8-4-1.

“We knew we were going up against two of the best offensive players in the league,” Bonsu-Anane said, in reference to Mercier and Logan Cassin. “It’s just good to see that our defense is strong and can stop them, even when they put pressure on us.”

When asked about his goal, Bonsu-Anane said in a way it wasn’t his score. The senior midfielder collected a rebound off a shot by August Marshall in the ninth minute, sending the put-back shot in for the game’s first goal.

“It wasn’t really me,” Bonsu-Anane said. “August hit a good shot, the keeper just didn’t catch it, I got it off the deflection and just put it in the back of the net.”

While Bonsu-Anane wouldn’t take full credit for his score, there was no questioning how much he contributed to his team in all facets. He played midfield and forward for most of the game, but in the later stages he was moved to the defender position, helping ConVal hang on to its lead.

“Del’s a player that’s very versatile, can play multiple positions,” ConVal Coach Josh Smith said. “He’s smart, he has a high soccer IQ, so he can shift into multiple roles. He has the speed, so that’s a huge asset as well, he’s big and physical and has all the intangibles to play multiple different positions.”

The second goal, which would turn out to be the winning score, came in the 47th minute on a picture-perfect play by Burgess and senior co-captain Finn Wegmueller.

Wegmueller came around the corner on the goalie’s left side and sent a cross into the box, where Burgess was in the perfect position to head the ball into the net.

“We kind of made eye contact right before he hit the ball,” Burgess said. “At practice, we take crosses and headers all the time, so just the time in practice, it paid off.”

After playing mostly midfielder through his first two years, Burgess has been asked to play more forward his senior year following the graduation of star attacker Max Richard.

Burgess has scored a career-best seven goals thus far, but he said he’s still got a ways to go as an offensive playmaker.

“It’s been crucial, but I’ve gotta be better,” Burgess said. “Seven goals this far in the season, it’s not good enough for me, so I’m just working hard trying to improve that number.”

After the two-goal margin was cut down to one, Merrimack Valley made some aggressive pushes for the net in the last 27 minutes. But all the Pride’s attempts either sailed wide or were stopped by ConVal senior goalie Mather Kipka.

Kipka finished with five saves, and dove for a loose ball in front of a charging Merrimack player in the closing minutes to help preserve the win.

“We never live in the moment of, ‘oh, we just gave up that goal, this is awful,’ ” Smith said. “We kind of thrive from that and we rise above it.”

Having passed this test against a tough opponent, the Cougars now prepare for a three-game week next week. It starts with a road game at Manchester West Tuesday at 4 p.m., followed by a Thursday 4 p.m. game at Lebanon — the second-ranked team in Division II with a 9-1 record — and ends with a Friday contest at home against Kearsarge at 4 p.m.

“That’ll probably be the toughest week so far,” Bonsu-Anane said. “We’ve just got to look at it like a mini playoff run.”