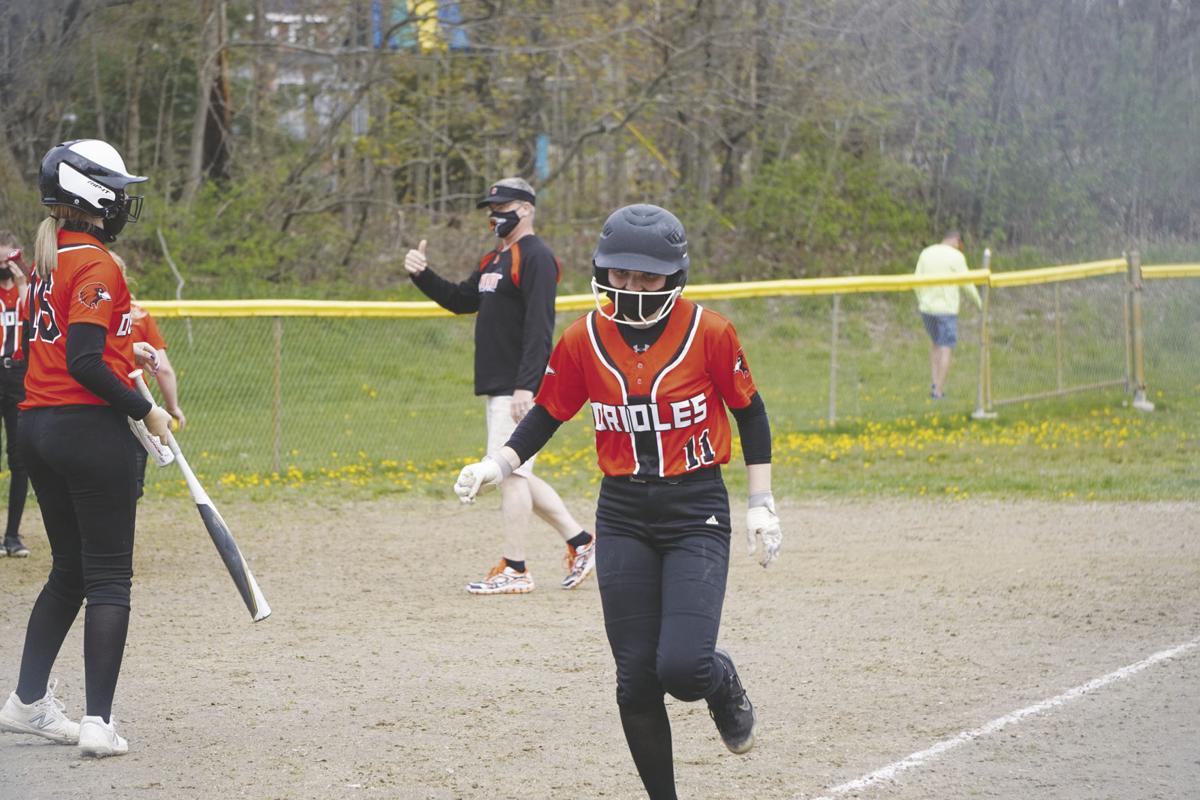 Tessa Spingola (11) of the Conant softball team makes her way around the bases after her fifth inning home run against Hinsdale Tuesday in Jaffrey. 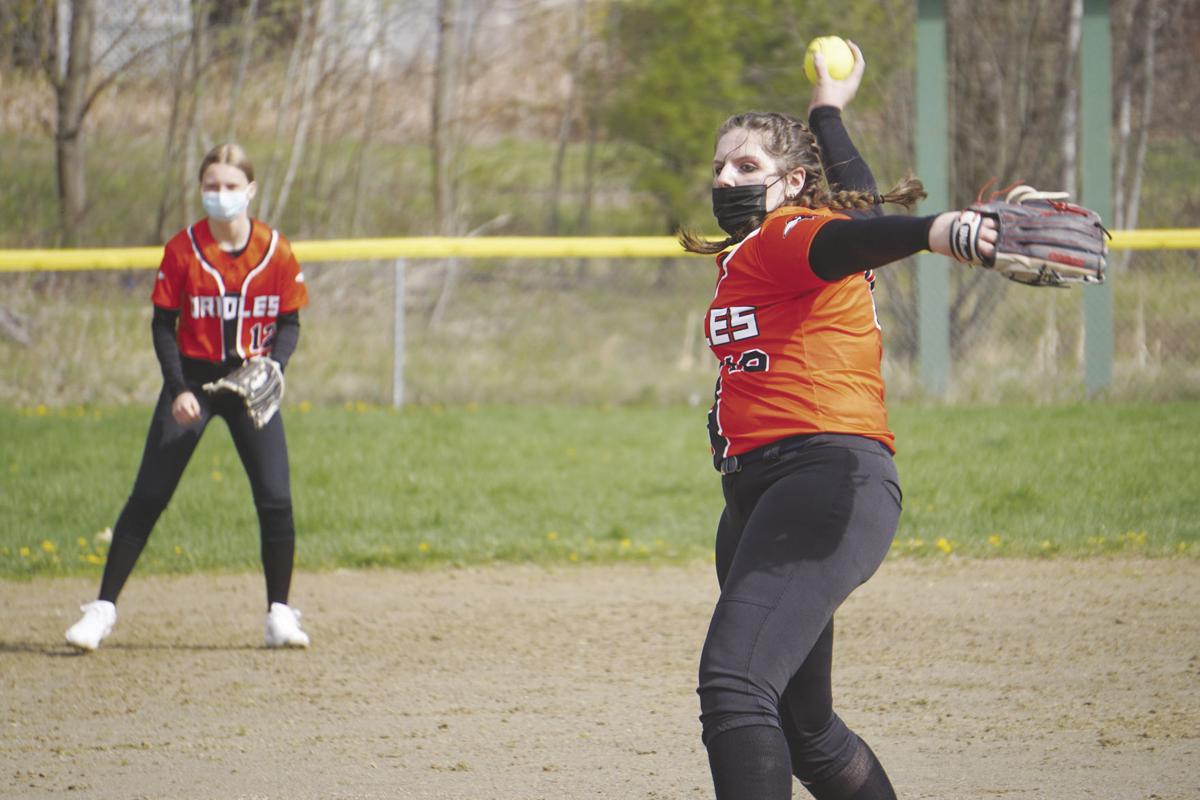 Becca Thibaudeau of the Conant softball team throws a pitch against Hinsdale, Tuesday in Jaffrey. 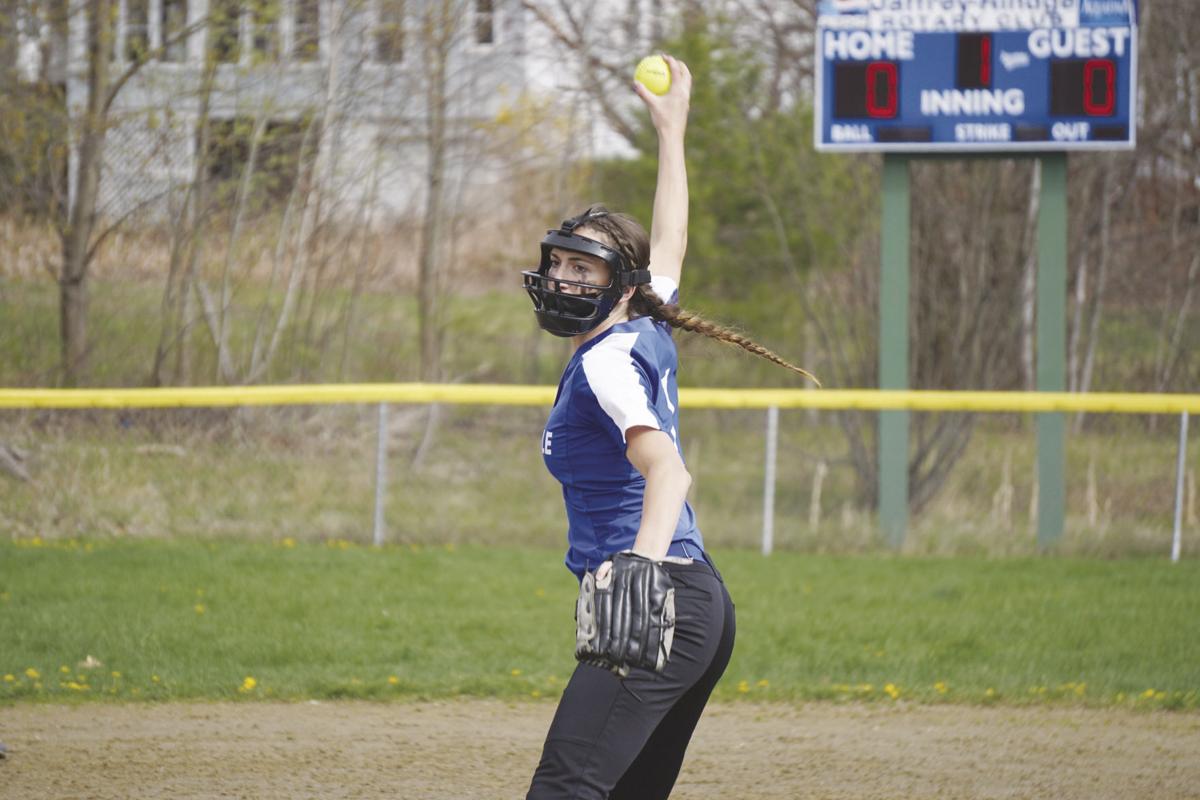 Angelina Nardolillo of the Hinsdale softball team throws a pitch against Conant, Tuesday in Jaffrey.

JAFFREY — Tessa Spingola picked a pretty good time to hit one over the fence.

It was the fifth inning and the Hinsdale softball team had just scored twice in the top half to start climbing back into the game.

So, to lead off the bottom half of the fifth, Spingola cracked a no-doubter to leftfield, her first home run of the season, to extend Conant’s lead and put a dent into any momentum that the Pacers had built up.

Although there wasn’t the usual mob of teammates meeting Spingola at the plate after rounding the bases — the umpire had to send the Orioles back to their dugout because of COVID regulations — the team seemed to understand the impact of the homer at that moment.

The Orioles went on to win, 9-4, Tuesday at Community Field in Jaffrey to move to 3-2 on the season. With the loss, Hinsdale falls to 1-4.

Hayes jacked a 2-RBI triple in the first inning to start the scoring for Conant after Hinsdale left the bases loaded in the top half. Hayes then scored on a passed ball to give the Orioles an early 3-0 lead.

In the next inning, Herr singled to score Heather Gonyea, then Aho doubled to score Herr and, just like that, Conant had a 5-0 lead.

Despite the early deficit, and a demoralizing first inning where Hinsdale had the bases loaded with one out and couldn’t get anyone home, the Pacers fought back, eventually making it a 6-3 game heading into the bottom of the fifth inning.

Spingola didn’t seem to like that Hinsdale was back within striking distance.

After her home run made it 7-3, Conant scored twice more in the top of the seventh and Hinsdale scored once in the bottom half to wrap up the scoring.

Becca Thibaudeau pitched the complete game for the Orioles, allowing four runs on five hits and striking out 10 batters. She also walked six.

“Our pitcher threw well,” Billings said. “She just got out there and threw strikes.”

Thibaudeau got out of the early jam in the first inning, and it was generally smooth sailing from there once she got the run support.

On the opposing side, Angelina Nardolillo pitched all seven innings for Hinsdale, giving up nine runs on 13 hits and striking out six.

There were some defensive miscues behind her, especially in the early goings, which didn’t help her case in the circle.

Nardolillo did not walk a single batter in her seven innings in the circle, which even earned her recognition from the opposing head coach.

“[Nardolillo] threw well today,” Billings said. “You have to tip your hat off to that.”

“She threw strikes, she did her job,” Bonnette said. “We just have to start playing tighter defense behind her, without a doubt.”

Nardolillo also found success with the bat, going 2-4 with a double and a triple and two RBI.

“She had a good night,” Bonette said. “She swung the bat well.”

Delaney Wilcox swung the bat well, too. She reached base three times, including a double in the third inning, and came around to score all three times.

“She’s been our best hitter so far, without a doubt,” Bonnette said.

Wilcox also had a solid game defensively at shortstop, proving herself as an anchor on the defense.

On a night when the Pacers saw significant defensive struggles, having that leadership at shortstop goes a long way.

“We need that, we need leadership,” Bonnette said. “That’s been our problem this year, defense. We play good defense in spurts, but then — like today — we come out and didn’t play well at all to start the game.

“But, all in all, it wasn’t a bad game. There were some bright spots,” Bonnette added. “We hit the ball OK, Angelina threw well and we play them again Thursday.”

Thursday’s rematch, in Hinsdale, is scheduled for 4 p.m.