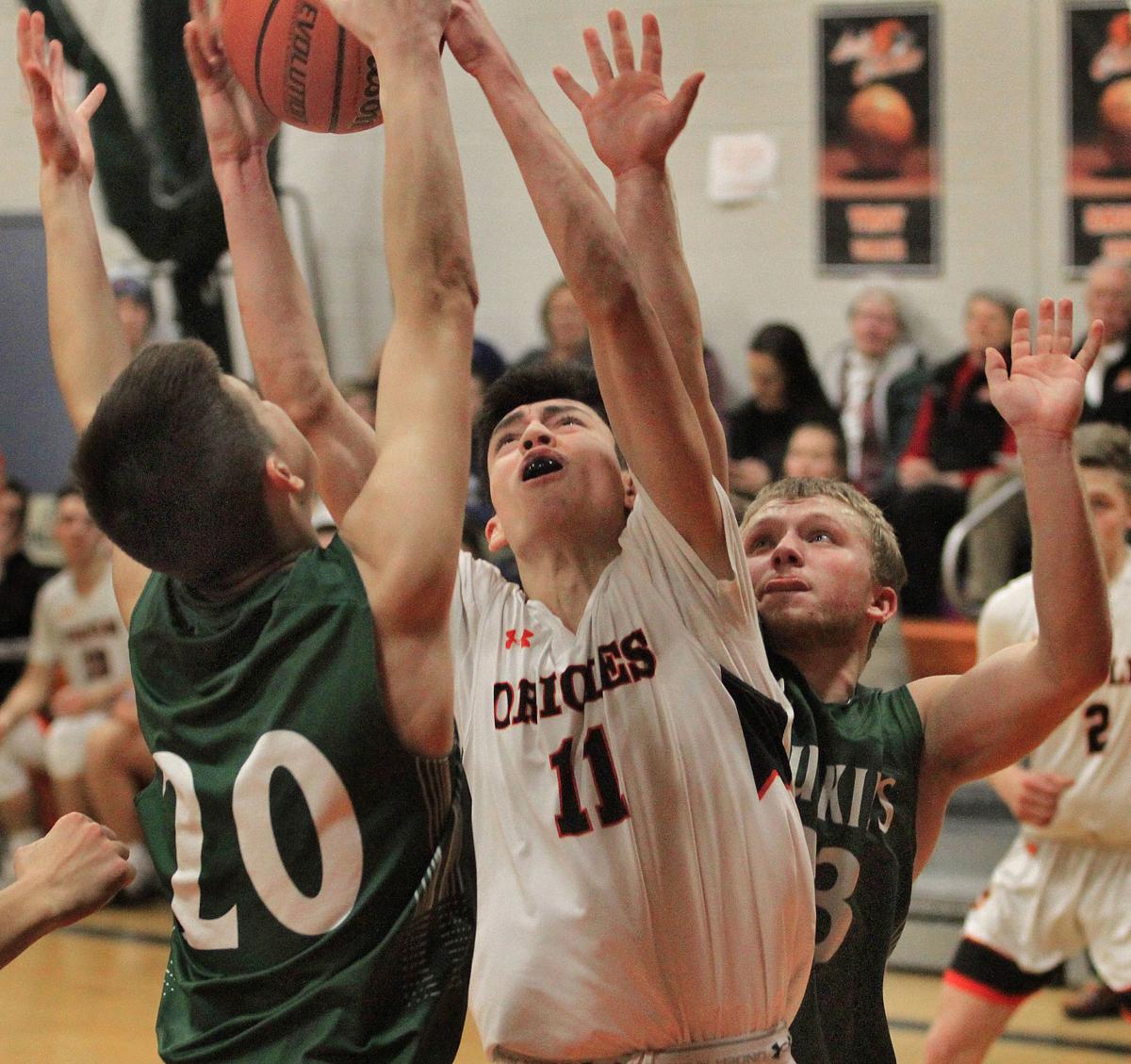 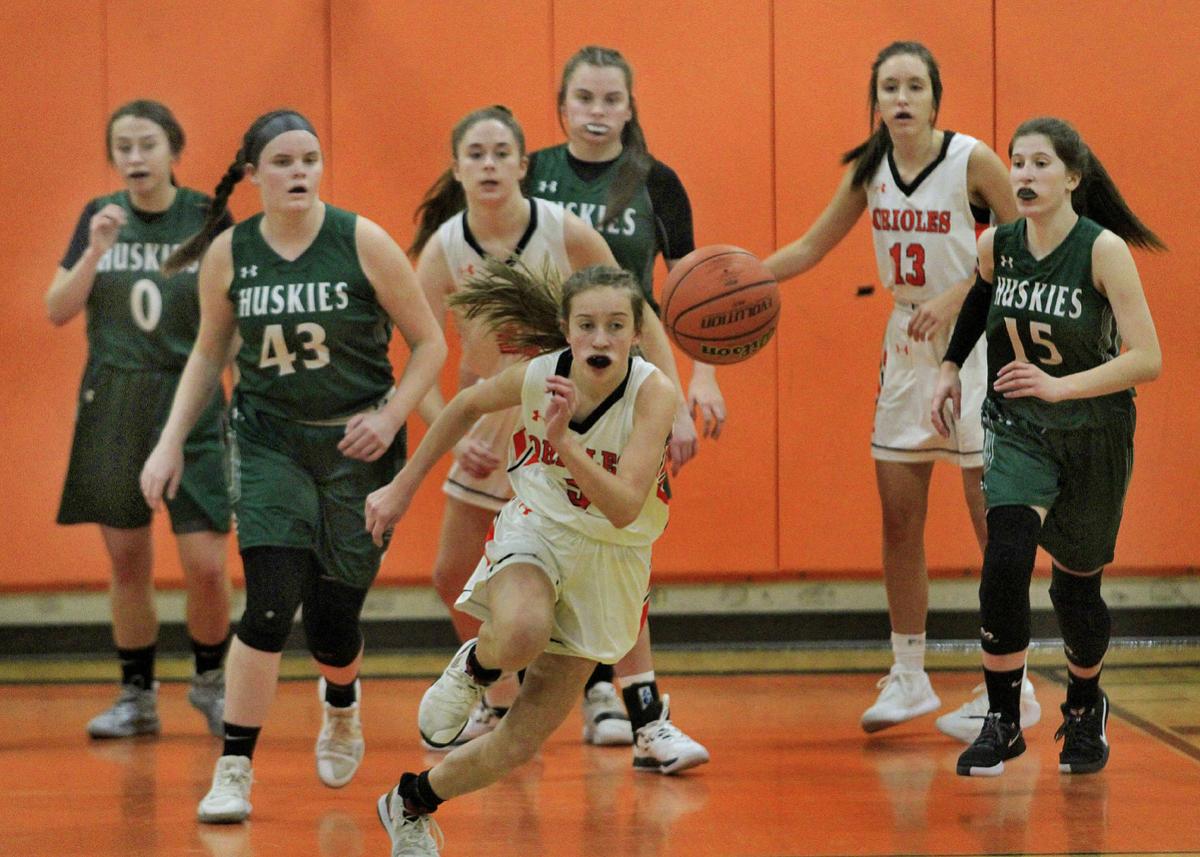 Conant’s Brynn Rautiola, center, chases down a loose ball against Monadnock in Jaffrey on Wednesday night.

Conant’s Brynn Rautiola, center, chases down a loose ball against Monadnock in Jaffrey on Wednesday night.

JAFFREY — Outside, an Arctic front blasted through town, leaving behind an icy wind and frigid temperatures. Inside the packed Pratt, it conversely grew steadily warmer, reaching barn-burner prominence by the second half and leaving fans spent by the end of two overtimes.

What a way to start the high school basketball season.

Monadnock Regional High and Conant High hooked up in an entertaining tussle Wednesday night at the Pratt Auditorium, a boys-girls double-header that the Orioles swept. But it was the opening boys’ game, a 78-74 Orioles victory in two overtimes, that left everyone talking and the opposing coaches and players hugging. In the girls’ game that followed, Conant pulled away in the second half for a 54-38 win.

“I’ve been coaching against Eric for seven years, and that’s my first hug with him,” Hill said.

The varsity twin bill, postponed a day because of Tuesday’s snow, was Conant’s opener and the second game for Monadnock, which downed Mascoma Valley Friday, 77-60. With a standing-room-only crowd jammed into the throwback gym — where the bleachers are only four rows high and those in the front row must pull in their legs so they don’t dangle onto the court — Monadnock charged out to a 17-7 lead. An irritated Saucier implored his players to sharpen their cuts away from the ball, and the Orioles responded with a 21-4 run to take a 28-21 lead midway through the second quarter. Gauthier ignited the run and capped it with a 3-pointer, followed immediately by a steal of the inbounds pass.

That left Hill wondering if his young squad — one senior, three juniors, and nine sophomores and freshmen — was about to be blown out. “I was worried. I was thinking, ‘What kind of character does our team have?’” Hill said.

It didn’t take long for him to get his answer. The Huskies sliced the lead to 30-27 at halftime, and the rest of the game was a see-saw affair amid the ear-splitting din, courtesy of both schools’ fans. Monadnock led 47-43 after three quarters and the lead shifted several times in the fourth quarter. Gauthier put Conant ahead 59-57 with 1:44 left and a nifty pass from Kidney to Nathan Doyle put Monadnock in front 61-59 with 52 seconds left.

Gauthier tied it with 40 seconds left, and Kidney’s long jumper at the buzzer hit the front of the rim and bounced away, appropriately setting up overtime. The Huskies will rue the first four-minute session, for they led 68-64 with 34 seconds left and couldn’t close it out. Two Gauthier free throws with 21 seconds left cut Conant’s deficit to two, then Monadnock threw the ball away trying to cross midcourt, under pressure from Conant’s press.

Everyone in the gym knew Gauthier would get the ball in the final 10 seconds, and the Huskies swarmed him as he approached the top of the key. But rather than force a shot or risk an offensive foul on a drive, Gauthier found Hayden Ketola open on the right baseline. Ketola calmly swished home the game-tying bucket at the buzzer.

The Orioles led the entire way in the second overtime, though by never more than four points. Gauthier hit 8 of 9 free throws in the final minute to preserve the win.

“We showed some toughness,” said Saucier, adding his team has plenty to work on the days ahead. “We didn’t guard for anything. … We’ve got to push it because we’re not big. We need to play a little more under control.”

Hill, in contrast, was pleased with the composure his young squad showed. “A lot of growth tonight,” he said. “This loss, obviously it hurts, but when you play Conant in December it’s one thing; when your goal is to play Conant at SNHU instead of Pratt (the Division III tournament late rounds at Southern New Hampshire University), that’s something else.”

In addition to Gauthier’s 44 points, Hunter Guevera added 11 and Connor Hart scored 9 for Conant. Kevin Putnam Jr. had 13 for Monadnock, Connor Brannon scored 11 and Doyle had 10.

The girls game that followed was much less dramatic, though it was close in the first half. The Orioles led 20-17 at halftime, then scored the first 10 points of the third quarter to ease away. “I thought we were definitely sloppy coming out of the gate, but we made some adjustments, made better decisions in the second half,” Conant Coach Brian Troy said. “I thought they really started to click in the second half.”

The father-son tandem of Jim and Dan Moylan officiated the boys’ game. … Fans from both schools had plenty of fun, with Conant’s banner-waving mascot playfully chasing a pair of banner-waving Monadnock fans around the court, an Oriole protecting its turf. … Black and orange championship banners line the walls of Pratt Auditorium, but most impressive is the wall behind the team benches, where it’s all state title basketball banners from one end of the wall to the other … The Conant and Monadnock boys will meet again in Swanzey Center Feb. 8, but could also match up next week in the Noyes VW Holiday Basketball Tournament at Keene State.