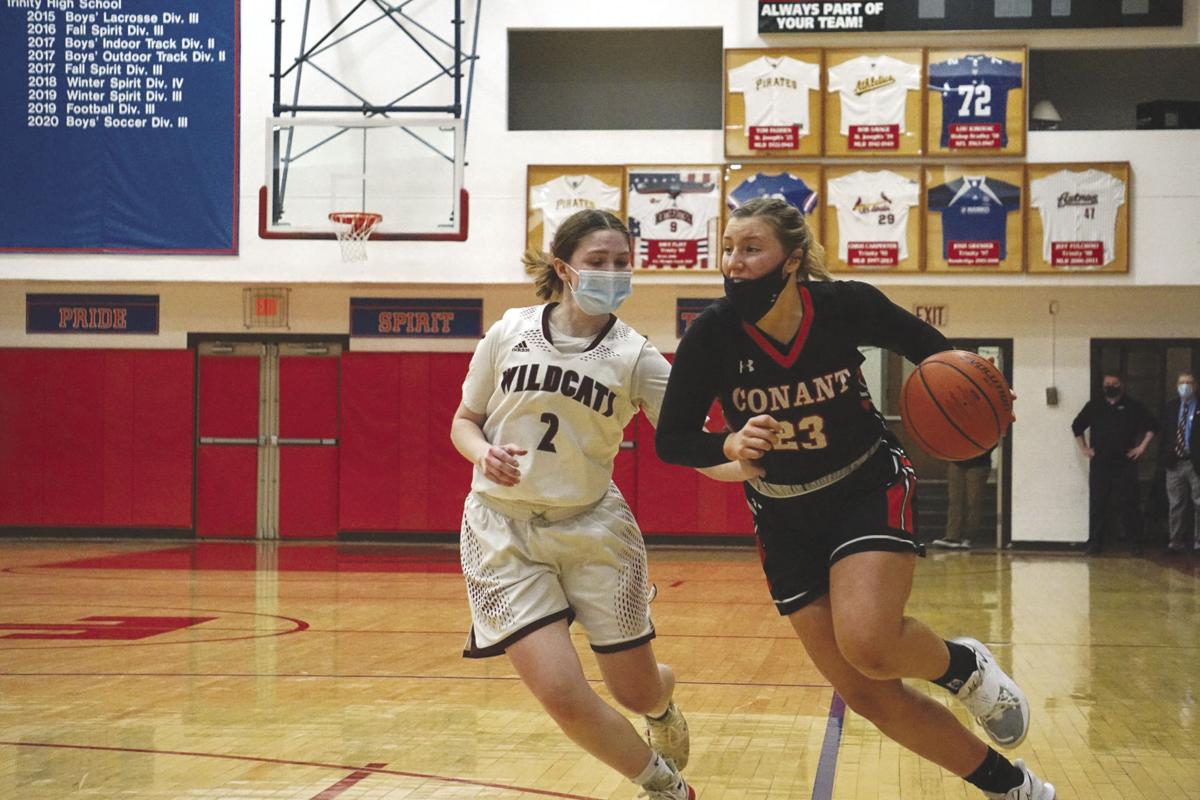 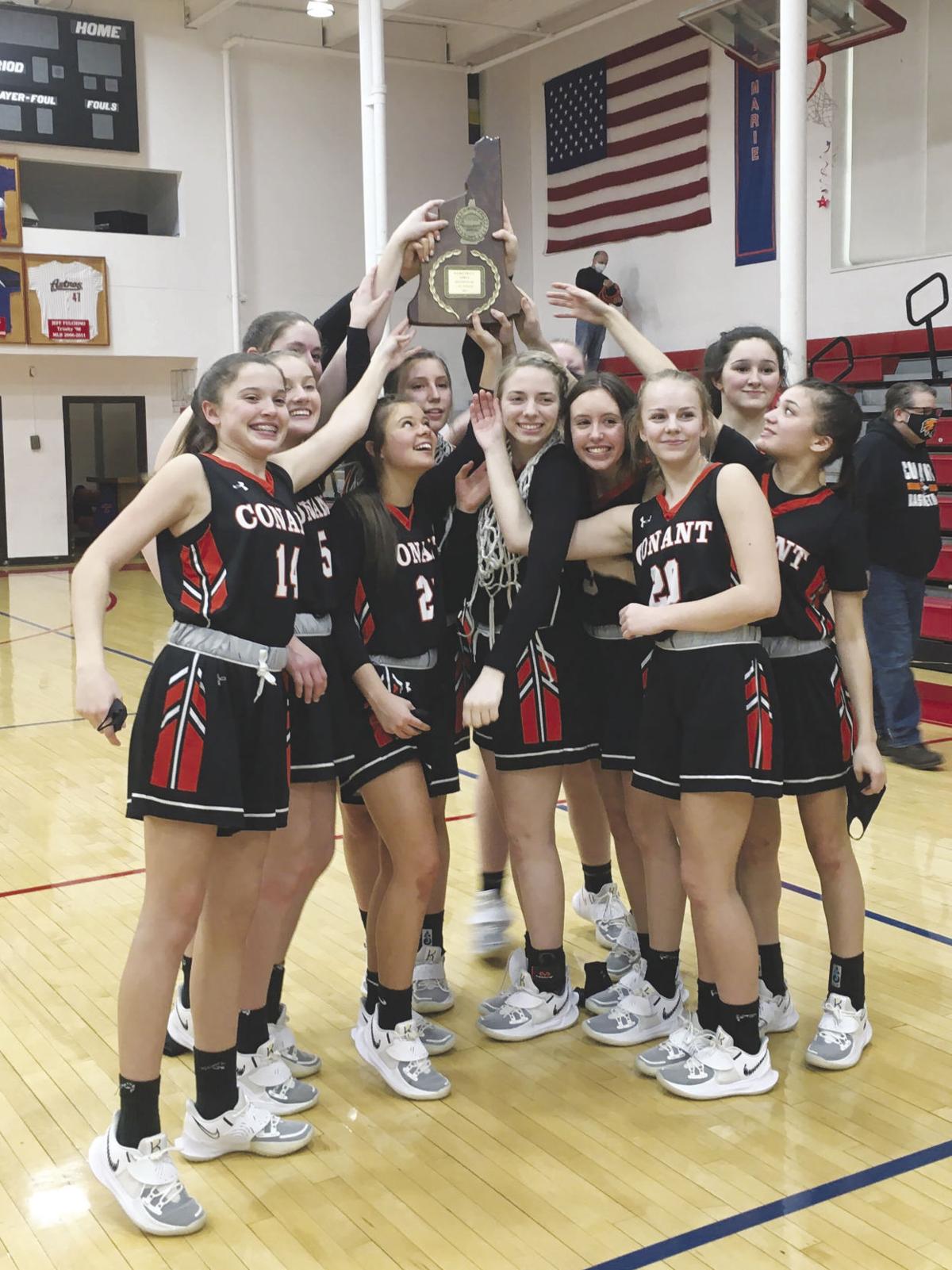 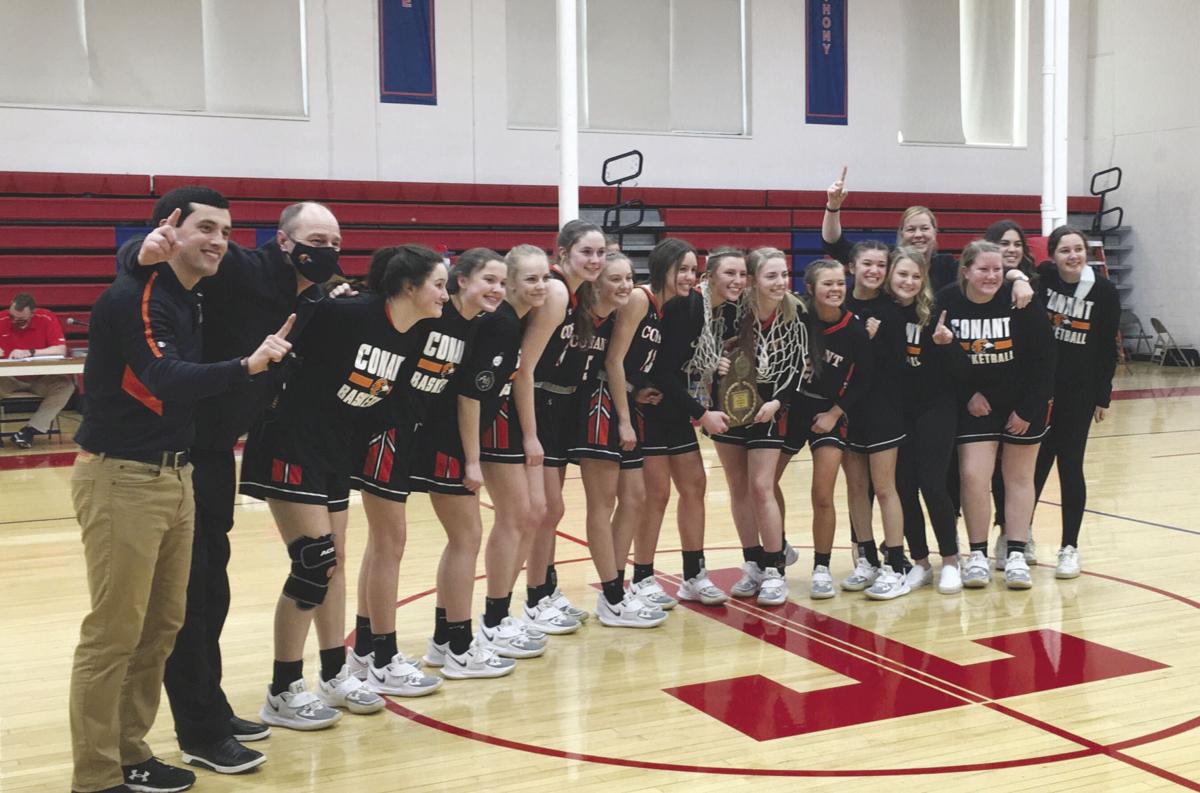 MANCHESTER — Elizabeth Gonyea wanted this one badly. You could just see it.

The senior had one of her best shooting nights in her final game in a Conant uniform, scoring a game-high 32 points in the Conant girls basketball team’s 59-43 win over Fall Mountain Sunday at Trinity High School in the NHIAA Division III title game.

It’s also the second straight year that Conant has made it through the season without a loss.

Gonyea, who was recently named the 2021 DIII Player of the Year, came out shooting from the start, hitting three three-pointers in the first quarter, five in the game.

“Her legacy is set,” said Conant head coach Brian Troy. “An incredible performance, and on the biggest of stages. For her to do that, in her last game of her high school career, it’s special. She’ll remember that for the rest of her life.”

Gonyea also went 13/14 from the free throw line, including six free throws in the final two minutes of the game to help seal the program’s ninth state title.

“I knew going into the game that my teammates had my back,” Gonyea said, with the net hanging around her neck and the championship trophy in hand. “They were telling me before the game, ‘This one’s for you, Liz.’ So, we were all on a mission of winning.”

“[Gonyea] led this team in the playoffs,” said Troy, the 2021 DIII Coach of the Year. “She wasn’t going to go out her senior year without leaving it all on the floor, and that’s exactly what she did. Super proud of her and the whole team for rallying around each other.”

Gonyea had 12 points in the first quarter alone. With some help from sophomore Emma Tenters (10 points) and junior Teagan Kirby (seven points), Conant got out to a 16-5 lead after the first frame.

Meanwhile, the Wildcats had trouble finding their shot, particularly from long range, and fell behind 31-10 with two minutes to go in the second quarter.

“We couldn’t get anything cheap,” said Fall Mountain head coach Matt Baird-Torney. “Nothing clicked for long enough for us.”

That’s when senior Morgan Beauregard (three points) banked in a three-pointer to give Fall Mountain some life.

Fall Mountain junior Makenna Grillone (11 points) hit a three of her own on the next possession to make it 31-16 with 45 seconds to go in the half.

The Wildcats had built up some momentum heading into the break.

They kept that momentum into the second half, and, eventually, a three pointer from senior Sophie Bardis (nine points) made it a 10-point game midway through the third quarter.

But immediately after, Conant went on a 6-0 run to regain control of the game.

“Any time we made a run, they had some sort of a back-breaking three, they drew timely fouls right when we had momentum going,” Baird-Torney said.

But Fall Mountain kept fighting, and a layup from senior Erin Brady (eight points) made it an eight-point game with just under two minutes to go in the fourth quarter.

“There’s no quit, they’re competitive,” Baird-Torney said about his team. “Everything we do is competitive. They believed.”

And, again, Conant had an answer. Getting to the foul line and hitting those free throws to put the game away. Gonyea, Kirby and sophomore Brynn Rautiola (eight points) all hit free throws in the waning minutes of the fourth quarter.

“[Fall Mountain] made a good run at the end,” Troy said. “We were just able to make the smart possessions down the stretch that we needed to. They were able to ... pull it together and calm down and ... pull it out at the end.”

It was Fall Mountain’s third consecutive finals appearance. Although the Wildcats lost all three, there’s something to be said about getting to that point on a consistent basis.

“It means a lot to us,” said Bardis, who spent all four years of her high school years on the team, including the three state finals runs. “It would’ve meant a lot if we won, but still just going through everything and all our hard work, it was just a fun season.”

“That was the message: Don’t forget the last three years,” Baird-Torney said. “The longevity, the consistency of it to get here. But it would’ve been nice for them to get rewarded.”

As the final buzzer rang through the Trinity High School gym, the entire Conant team flooded the court, and Troy raised his fists in the air in celebration, wearing a smile that could shine through any mask.

His team had just made history.

“This doesn’t happen every year. It’s a special thing,” Troy said. “We were on a mission from day one. You could tell the girls were hungry to go back and they wanted to do it undefeated.

“And to do it on the road too, I think is the biggest thing for us,” he added. “It’s been special for me, special for all the girls and the community as well.”