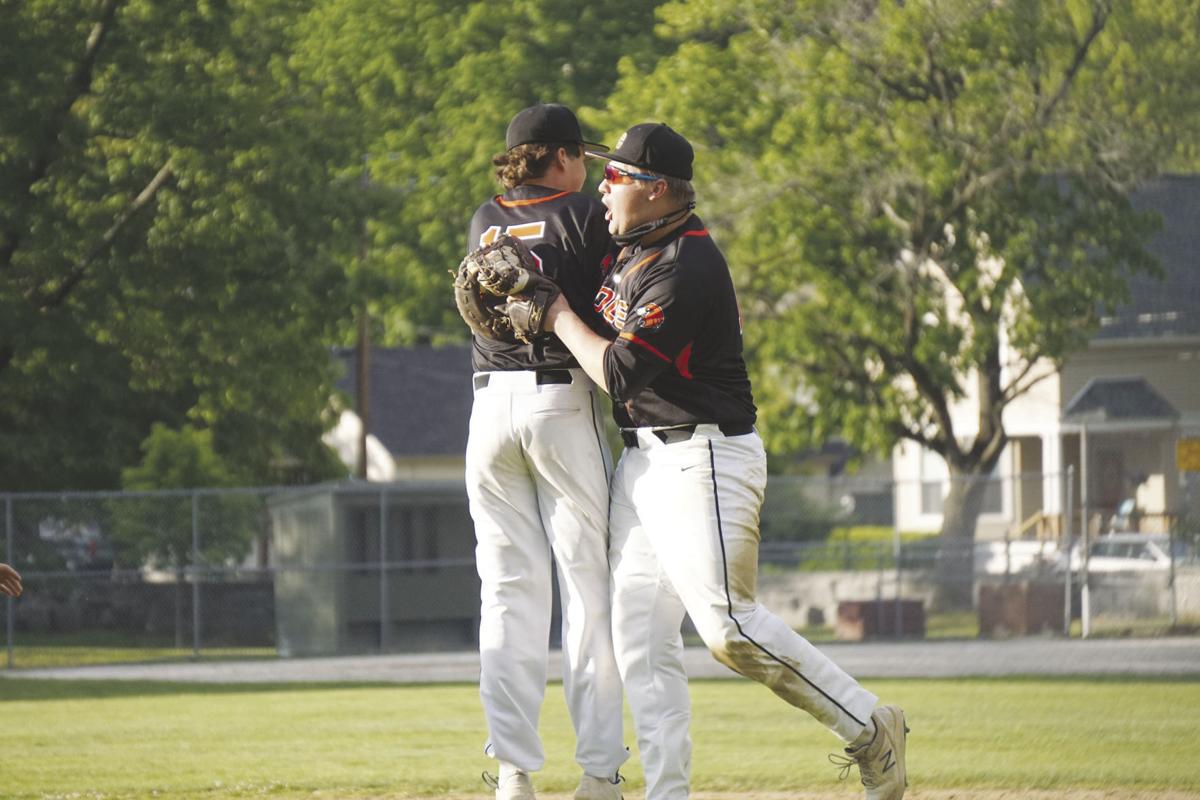 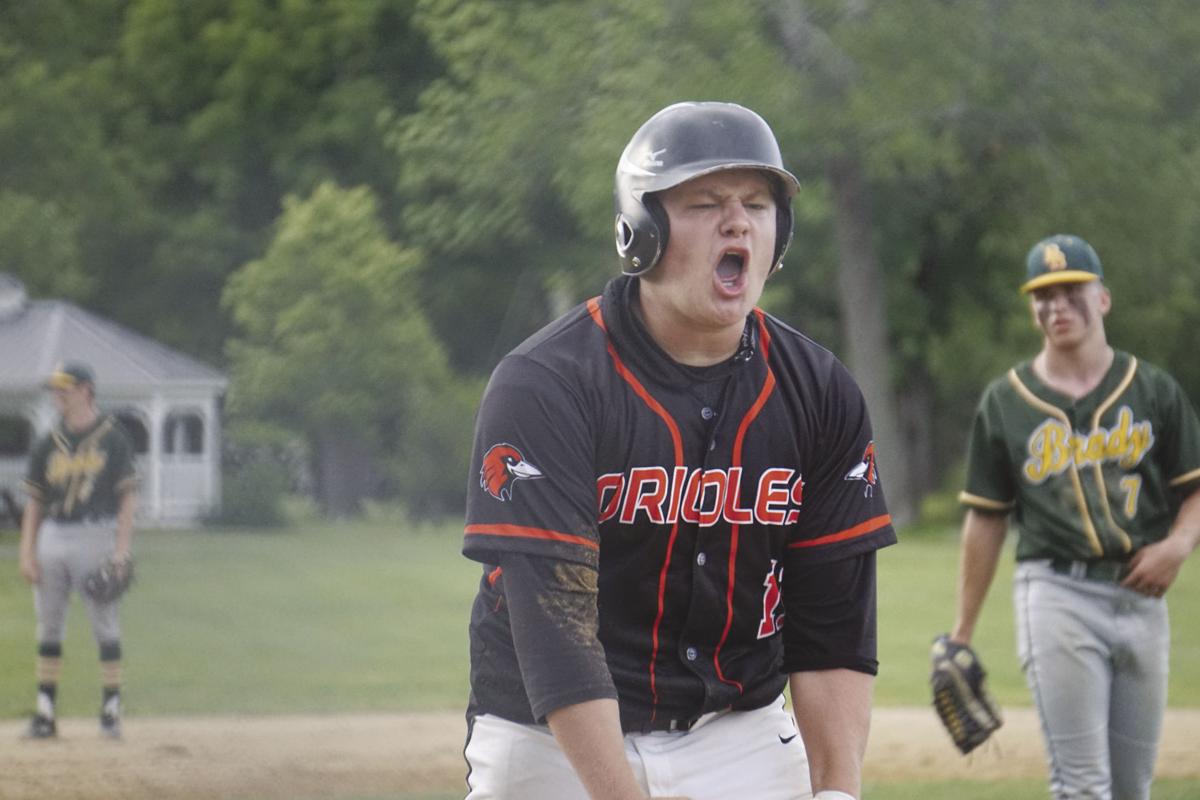 Garrett Somero celebrates after scoring the game-winning run in the ninth inning of the Conant baseball team’s NHIAA first round playoff win over Bishop Brady Tuesday.

CONCORD — As soon as the ball got past Bishop Brady’s third baseman, Garrett Somero knew he was scoring.

Somero was the game-winning run in the Conant baseball team’s nine-inning, 3-2 win over Bishop Brady in the first round of the NHIAA Division III tournament Tuesday at Rollins Park in Concord.

The junior took off towards third base when Bishop Brady catcher Darren Earley overthrew the third baseman, which allowed Somero to come home.

“I was going home no matter what,” Somero said after the game. “The burden just came straight off [when I scored]. It was awesome.”

But since the run came in the top of the ninth, the Orioles still had some work to do to secure the upset.

And it wasn’t easy.

Bishop Brady junior Matt Wiley led off the inning with a walk and sophomore Bradyn Mundy followed with a bunt single to flip over the lineup, still with no outs.

The Orioles got the lead runner out on a fielder’s choice, but then sophomore Mike Threscher walked to load the bases.

That’s when Conant head coach Aric LeClair felt like he had to make a pitching change.

Freshman Jordan Ketola was asked to come into the tough situation and protect the one-run lead. He started his outing with a big strikeout, then forced a high pop up — not an easy play — but junior Malique Motazes made the catch at shortstop to end the game.

“Jordan Ketola — he’s a freshman,” LeClair said. “But he’s been in that situation about three or four times this year and every time he’s had the same result. He stepped up and competed and got the job done.”

All eyes were on Motazes as he moved into the outfield grass to make the final out.

“I was just praying Malique caught it,” said Jordan Ketola. “It was a feeling of relief.”

“Those are one’s that you’re on your knees, fingers crossed, praying to the Lord that it falls in somebody’s glove,” LeClair said.

The win proves how far the Orioles have come this season. A team that struggled with defensive miscues early in the year committed just one error and made some stellar defensive plays to keep them in the game.

“You have to make the routine outs,” said senior Hayden Ketola, who was a key piece of the defense as the first-baseman. “We came together and made some very good plays. Making plays led to hitting the ball.”

A Conant team that made mental mistakes in the early goings of the season stayed calm and composed throughout the high-intensity game.

“The hard work and dedication that they’re doing every day in practice … they’re buying in,” LeClair said. “They work hard and have the will and determination to not give up.”

Somero got the start for Conant and had “the best game he’s ever pitched” according to LeClair, and Somero agreed. The junior went seven strong innings, giving up the two earned runs on five hits and striking out seven.

“Coming in, we had nothing to lose,” Somero said. “It was just about going in there and pitching strikes and hitting spots.”

Sophomore Luke Lambert came in to pitch the next 1.1 innings before Jordan Ketola wrapped things up.

Hayden Ketola, junior Chris Bergeron and Lambert each recorded a hit for Conant. Hayden Ketola opened up the scoring with a two-RBI single in the second inning to give Conant a 2-1 lead.

That lead held until Bishop Brady tied the game in the fourth inning on an RBI single from senior Connor Treybig, the DIII Player of the Year.

The game was deadlocked from there and neither team had any scoring opportunities until the eighth inning when Bishop Brady had a runner on third base with just one out.

The next two Bishop Brady batters were intentionally walked, loading the bases and giving Conant a force out at any base. The Orioles took advantage when Bishop Brady attempted a suicide squeeze.

The bunt attempt was popped up to Lambert, who was pitching at the time, and Lambert tagged third base to get the runner, who was already halfway home, and get himself out of the jam with the double play.

Conant scored in the next half inning to take the lead for good.

Mike Threscher got the start for Bishop Brady, but only went one-plus innings before Connor Treybig game in to pitch the rest of the game.

Threscher left in the second inning after the first two runners reached base; Lambert reached on an error and Somero reached because of catcher’s interference. Treybig came in to clean up the mess, but instead the runners advanced on a sacrifice, then Hayden Ketola hit a two-out, two-RBI single.

Treybig got through the rest of his outing with relative ease, finishing with seven strikeouts and only giving up three hits in his eight innings pitched. None of the three runs he gave up were earned.

Conant visits Mascenic Thursday in the preliminary round of the NHIAA tournament. The teams have played twice this year already, with Mascenic coming out on top both times.