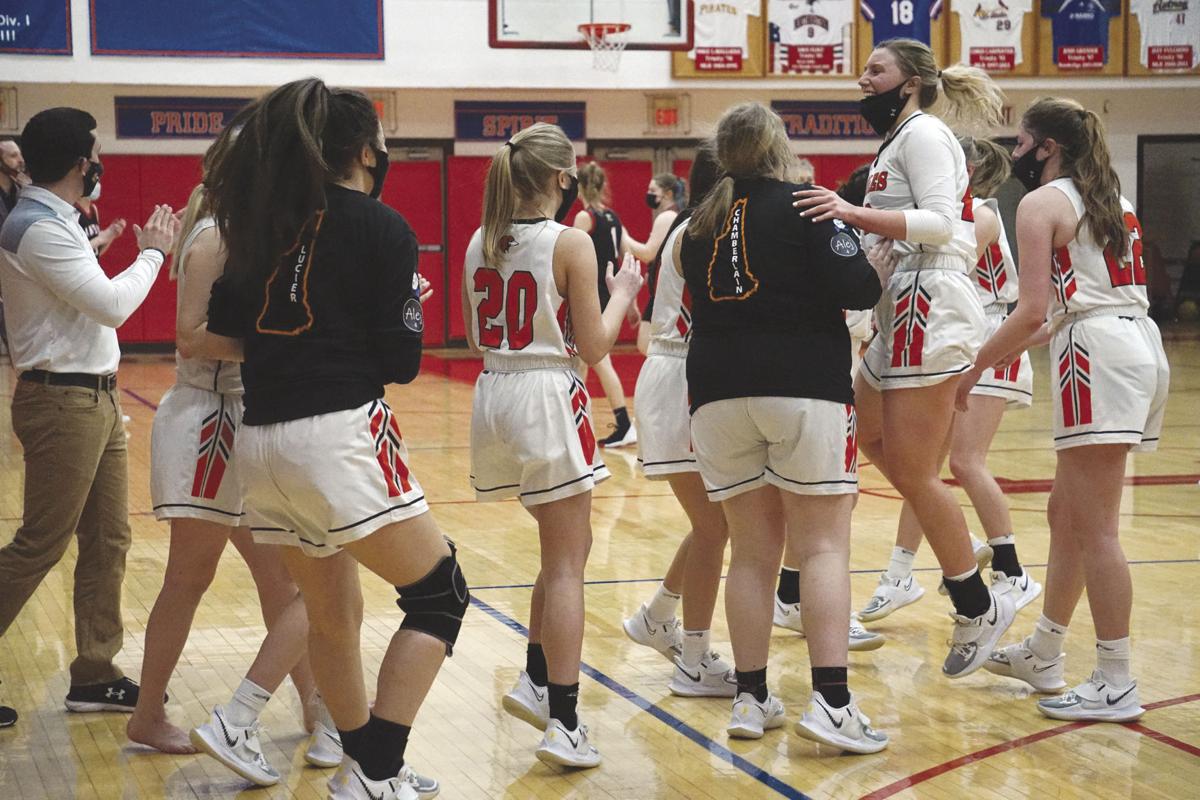 The Conant girls basketball team celebrates its semifinal win over Campbell on Thursday at Trinity High School in Manchester. 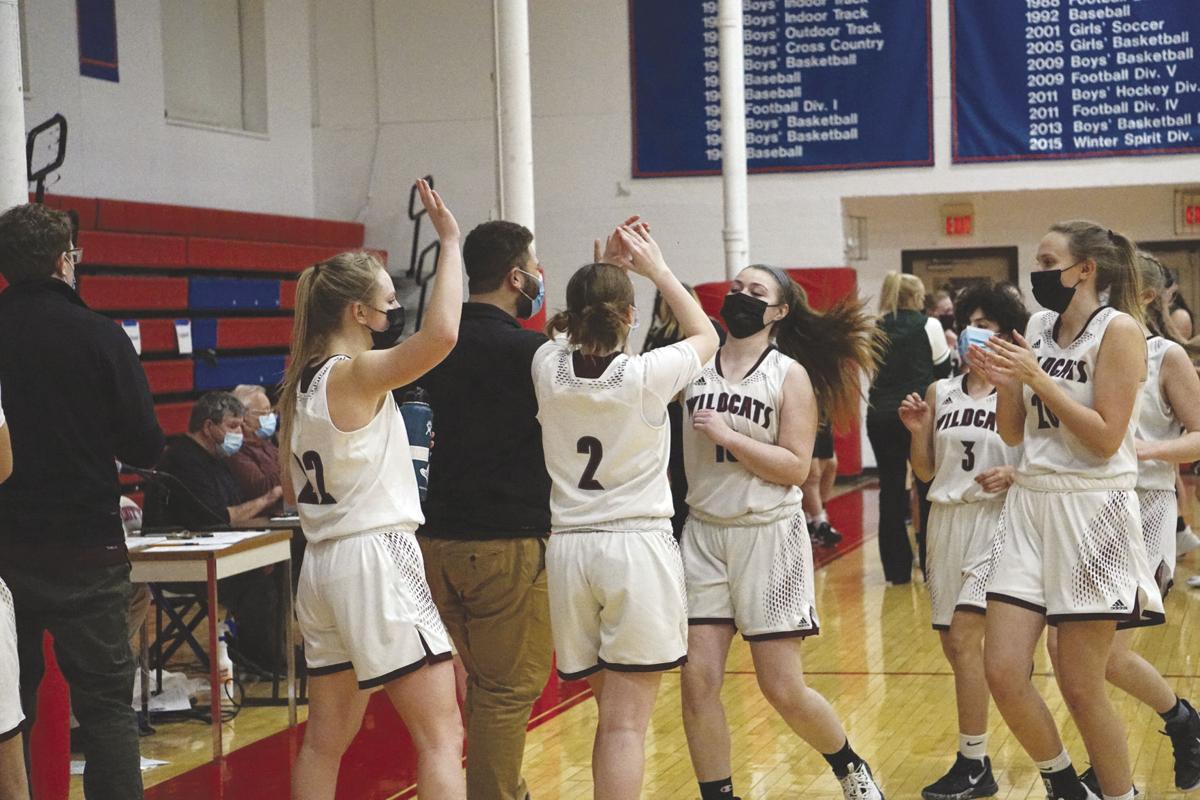 The Conant girls basketball team celebrates its semifinal win over Campbell on Thursday at Trinity High School in Manchester.

Stop me if you’ve heard this before.

On Sunday the Fall Mountain girls basketball team will face off against Conant in the NHIAA Division 3 state championship game.

It’s a rematch of last year’s title game, which Conant won, 51-42, to complete its undefeated season.

The Orioles are aiming to do the same this year but know what kind of challenge Fall Mountain brings.

“It doesn’t get any easier from here on out,” said Conant head coach Brian Troy after Thursday’s semifinal win over Campbell. “We’re just going to prepare really well and get some sleep and rest our bodies a little bit and make sure we’re ready to go.”

Last year’s game was neck-and-neck, with neither team pulling away until the final few minutes. In fact, Fall Mountain held a lead in the fourth quarter before some foul trouble put Conant at the line, and the Orioles converted.

“It was literally a 50-50 game right up until the last two minutes,” said Fall Mountain head coach Matt Baird-Torney on Friday.

Fall Mountain’s Sophie Bardis, a junior in last year’s game, stole the spotlight that night, hitting six three-pointers and scoring a game-high 18 points. Her six long balls set a tournament record for most threes in a championship game.

Senior Elizabeth Gonyea, who went on to earn Divison 3 Player of the Year last season, finished that game with 12 points and four steals for Conant.

“It’ll definitely be a great game to watch,” Gonyea said of the finals matchup after the semifinal win on Thursday. “[Fall Mountain has] great shooters that we have to get out on, but the game plan is always the same. We just go out and give it a fight.”

Junior Teagan Kirby, who finished with nine points and six rebounds in last year’s championship game, also expressed her excitement for the rematch.

“We’re all really excited to go back and play Fall Mountain again,” Kirby said Thursday. “It’s definitely a tough matchup and we’ll both go neck-and-neck with each other. It’ll be a good game at the end.”

Both teams field similar teams as last year, with Fall Mountain bringing back its entire roster and Conant just losing one key piece in Silas Bernier.

The similar squads might help the coaches prepare for Sunday’s battle because the two teams have yet to face each other this season. Normally, the teams will play two or three times throughout the year, helping prepare them for the almost inevitable matchup in the postseason.

“This game, you just put it all out on the line,” Baird-Torney said, adding that in-game adjustments are going to pail in comparison to previous years. “I think, more than anything, it’s going to come down to who happens to play better, as simple as that sounds.”

Another factor, Baird-Torney pointed out, is that the Wildcats have four seniors on their roster this year. Last year, they had none.

“[The girls] certainly didn’t put any less effort into the game, but there is something to be said when you have four seniors that understand that this is their last year, their last opportunity,” Baird-Torney said. “There is no, ‘Well, we’ll get them next year.’ This is it.”

The same could be said about Gonyea, Conant’s lone senior, who will be playing in her final game Sunday.

All year, Troy and the Conant girls have talked about wanting to make this season special. And it all seems to always come back to doing it for Gonyea, who has clearly made her impact on the program.

Pick up a win over D2 Bishop Brady on senior night? It was for Gonyea, Rautiola said after that game.

Score a team-high 18 points in the semifinal win over Campbell? It was for Gonyea, Kirby said Thursday.

And the program has made an impact on Gonyea, too.

“This team means a lot to me,” Gonyea said Thursday. “We’re a very special group of girls and we always have each other’s back.”

But one thing that sometimes gets lost in the shuffle, as Baird-Torney pointed out, is that what both of these teams have been doing is already special, no matter the outcome of Sunday’s game.

Conant is looking to complete its second consecutive undefeated season, while Fall Mountain will be making its third state title game appearance in a row.

“It’s easy to get into that situation where people just put an expectation on your group of, they’re one of the top two teams in the division and so anything short of that seems like an underachievement,” Baird-Torney said. “Almost daily I remind the girls that what they’re doing isn’t supposed to happen.

“It’s not easy. It takes an awful lot of work,” he added. “To be able to go to a final three years in a row, regardless of what people say, it just doesn’t happen.”

In a year that’s been as wonky as they come, seeing Fall Mountain and Conant back in the state championship game might provide some of that normalcy that so many have been craving for.

“It’s always competitive,” Baird-Torney said. “It always feels like you haven’t actually won it all unless you’ve beaten the other team that year, so it just seems right.”