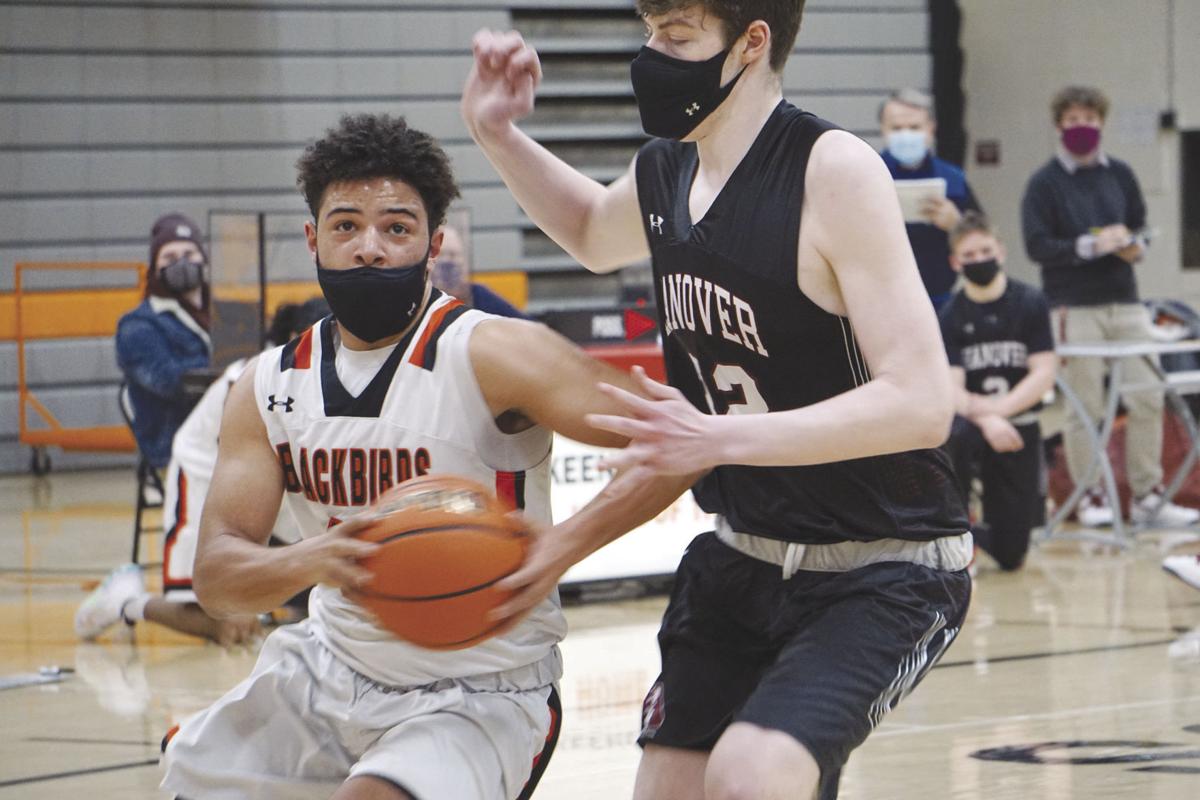 Senior Christian Oxendine pushes towards the hoop in the second half of Keene’s matchup against Hanover on Friday in Keene. 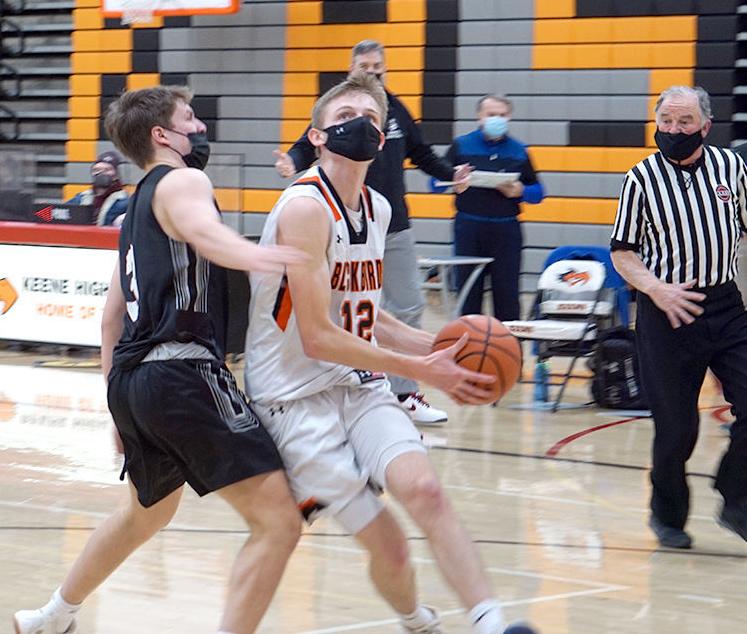 Keene High senior Alex Charles drives to the hoop during the first half of Friday’s game vs. Hanover at Keene’s Purbeck Gymnasium.

After only putting up 23 points against Hanover in its loss on Wednesday, the Keene boys basketball team came out with energy and intensity from the opening possession and came away with a 56-49 win Friday at Purbeck Gymnasium.

“It says a lot about their mental toughness,” said Keene head coach Kevin Ritter. “They bounced right back; they were willing to work hard. They bought in, and they did a great job.

Effort and defense were two keys in Friday’s win. The Blackbirds, using their full-court press from the start, put lots of pressure on Hanover, forcing turnovers and not letting the Marauders take very many shots.

“It’s all part of our game plan is to try to create offense with our pressure,” Ritter said. “I thought the guys really executed that stuff well.”

But Hanover took advantage of the looks they got, especially from deep, and led 10-9 after the first quarter.

Five quick points from senior Alex Charles late in the second quarter, off a coast-to-coast layup followed immediately by a three-pointer, gave Keene the lead, and a strong defensive stand on the other end kept it. The Blackbirds were ahead 23-20 at the half.

Charles, who finished with 17 points, and classmate Christian Oxendine led the way offensively for the Blackbirds. Oxendine had a team-high 18 points and found his groove around the net in the second half, scoring 11 in the final two quarters.

“I was just reflecting on the last game,” Oxendine said. “As an older, veteran guy on this team, I was really thinking that I needed to be more aggressive, especially getting to the rack.”

“They had a monster night for us,” Ritter said of his leading scorers. “They stepped up big time. Just huge production.”

Unlike Oxendine, who found most of his success in the paint, most of Charles’s production came from beyond the arc, hitting three triples.

“I made one and said, ‘Oh, alright. I’m feeling it good tonight.’ So, I just kept on going,” Charles said. “It’s what we needed. We needed to score.”

Despite Hanover making more three-pointers in the second half (Maxwell Galbraith hit six three-pointers on the night for the Marauders), Keene started to gain some breathing room — a little bit, at least — in the final few minutes of the game thanks to a layup from Oxendine off a steal followed by a three-point play after the senior was fouled going to the basket on the next possession.

After that “And-1” free throw from Oxendine, the Keene bench seemed to start to taste the win.

Free throws from Charles and junior Nick Maiella, who finished with eight points, in the final minute sealed the win.

It was the team’s first win after dropping its past three.

“That’s definitely the confidence booster we needed heading into the future, with playoffs around the corner and Mascenic next week,” Oxendine added.

Keene faces Alvirne on March 4 in the first round of the NHIAA playoffs, it was announced Friday.

But before that, the Blackbirds have one final home-and-home series to close out the regular season.

The Blackbirds visit Mascenic on Tuesday at 6 p.m. before hosting the Vikings next Friday in their regular season finale at 6:30 p.m.