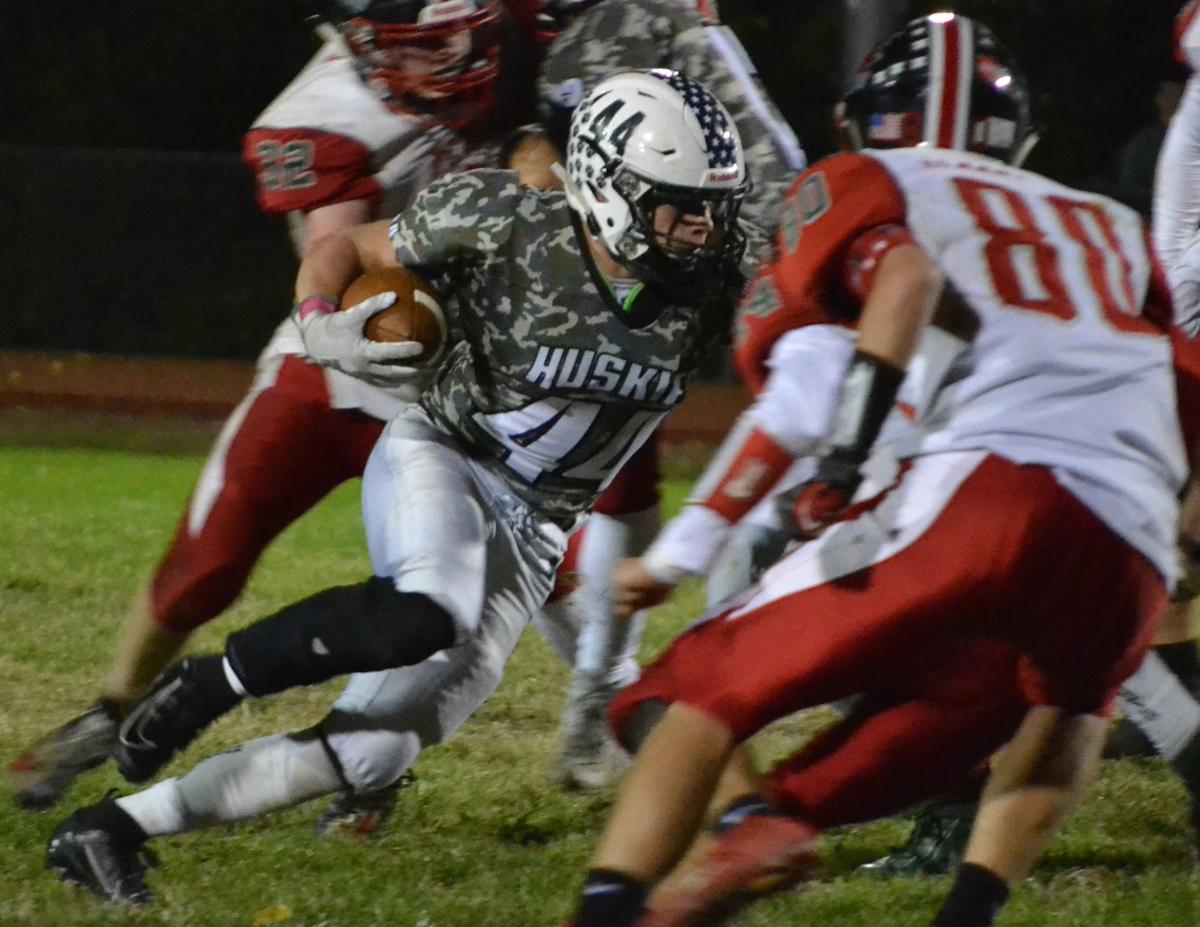 Monadnock senior co-captain Lincoln Blodgett, 44, has stepped up as the Huskies’ primary ball carrier, rushing for more than 100 yards and scoring in almost every game this season. 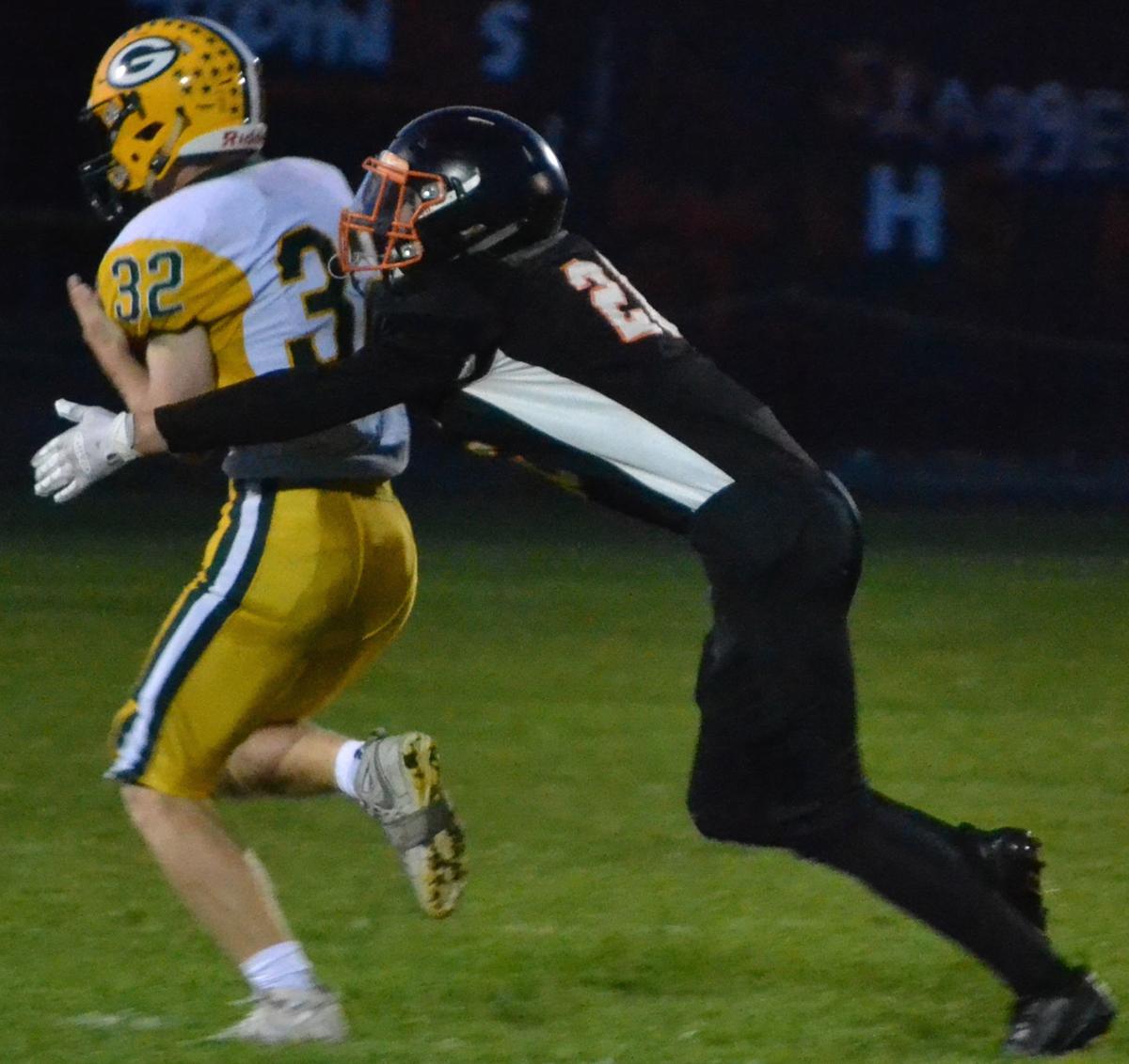 Sophomores like Marcus Rokes, right, have impressed Keene Coach Linwood Patnode as they work to rebuild the program.

Monadnock senior co-captain Lincoln Blodgett, 44, has stepped up as the Huskies’ primary ball carrier, rushing for more than 100 yards and scoring in almost every game this season.

Sophomores like Marcus Rokes, right, have impressed Keene Coach Linwood Patnode as they work to rebuild the program.

At this point in the season, high school football teams have a pretty solid grasp on what kind of squad they have, and what they need to do in the last games of the regular season.

So, here’s a look at where the local football teams are right now.

After graduating most of their starters on both sides of the ball, it seemed impossible that the Huskies would be able to keep up their near-perfect record from the past two seasons, which included a state title last year and runner-up the year before.

But after rebounding with back-to-back wins over Newport (28-22) and Hillsboro-Deering (52-20), Monadnock stands at 4-2 and looks primed for another playoff berth.

“I think we’re doing well,” Monadnock Coach Ryan Avery said. “We had some bumps in the road there to start out with, and they’ve worked hard to recognize our weaknesses and try to fix them. I’m pleased with the effort I’m getting out of the guys, and the way they’re focused on moving forward.”

Senior co-captain Lincoln Blodgett has made a near-seamless transition from fullback to running back. He has rushed for more than 100 yards and scored in almost every game so far, including three games with at least three touchdowns.

Juniors Justin Joslyn and Victor Lotito have played strong supplemental roles in the backfield, while Nate Doyle has taken on Santaw’s role as the dual-threat quarterback, throwing for a touchdown in each of the last two games and rushing for two in the win over Newport.

A lot of credit also has to go to the linemen, who have stepped up after graduating three All-State selections from the group last year — Nate Alley, Cole Elfreich and Joey Joslyn. They returned just one — senior co-captain Joey Drew. In particular, Avery mentioned the play of senior Wyatt Guyette, who returned to action after suffering a season-ending knee injury in Week 2 last year.

“I don’t think we’ve missed a beat, to be honest,” Avery said of the offense. “Obviously, every year, including last year, we had some kinks to work out with who fits where and in what position, and learning the blocking schemes and the speed of varsity football. I think that’s an every-year thing, whether you lose a few kids or you get kids that are returning.”

The defense has been a different story. Coming off a dominant season where it allowed just 55 points, Monadnock has more than doubled that total through six games.

Although the Huskies looked strong after giving up just six points through the first two games, the two losses that followed were an 87-point wakeup call that they still had work to do.

“It’s communication,” Avery said. “Even the kids that returned from last year are now playing different positions to get other kids in there, so not only is it new kids on the defense, but the kids there are playing different positions. We’re just trying to work out communication, understanding how the thing works as a whole, where everybody needs to fit, to make it work.”

Monadnock has a pair of tough road games ahead, first against Laconia (3-3) tonight at 7 and then against Campbell (5-1) — the team its faced in the state finals each of the past two years — the following week. The Huskies wrap up with a home game against Kearsarge (0-6).

“I’m worried about Laconia right now,” Avery said. “They’re big, they’re physical, they’ve got fast running backs. We’ve got to get by Laconia before I worry about the rest of it.”

When he became head coach of the Blackbirds back in July, Linwood Patnode knew what he was getting into.

He knew he was taking over a program with one win over the past two years, with less than half an offseason to work with before his first season.

That first season has proven to be as tough as expected, with Keene standing at 0-6.

The offense has shown flashes of potential, led by sophomore quarterback Tucker Brown. The team has scored at least 20 points three times this season, something it only managed once last year.

However, the defense — which has started as many as six sophomores — has continued to struggle, allowing at least 28 points in every game and at least 40 in four of them.

Patnode said, however, that he’s been impressed with the effort the younger players have put in to improve. He mentioned sophomores Jarrod and Marcus Rokes, Tanner Payne, Jonas French, Sean Simeon, Keller Grissom, Jason Foster, Ben Morgan and Trevor Amiton, and freshman Emery Ray, who has started at guard in every game.

The Birds host Nashua North (6-0) Saturday at 1 p.m., then play at Winnacunnet (1-5) next Friday and close with a home game against Spaulding (2-4) on Nov. 1. While some of those games look more winnable than the team’s previous matchups, at least on paper, the goal is still to grow for the future.

“I every week look for more physicality than what we showed the week before,” Patnode said. “That is our biggest downfall, that we are not a physical team, so every week I look to bring that out.”

The Wildcats started out their season with back-to-back losses to Raymond (31-7) and Winnisquam (33-14), but since then, they’ve won three straight over Franklin (36-0), Farmington (49-0) and Bishop Brady (42-6). They now control their own destiny, clinching a Division IV playoff spot if they win their last two games.

“I like their toughness. They’ve been pretty physically and mentally tough,” Fall Mountain Coach Orion Binney said. “We had some pretty rough talks after those first two [games], because I thought we could be a lot better, and they just came back and kept working, so I’m pretty impressed with their toughness and their ability to learn.”

The offense started out being led by Reggie DeCamp, but Luke Gay took over in Week 2 with some solid results, having thrown for a touchdown in each of the last two games.

Binney praised the efforts of running back/outside linebacker Isaac Westover — who has run for five touchdowns over the past two games and been a consistent contributor on defense. Alex Flynn, a strong blocking tight end, has also contributed to the passing game, and leads the defense in tackles and sacks. Tyler Swain, who has found the end zone twice on kick returns, has been solid as a receiver and ranks second in tackles and sacks after transitioning from defensive back to defensive end.

The Wildcats’ final two games bring a lot of pressure. They start at Mascoma Valley Saturday at 2 p.m., then host Newfound next Friday night. Both opponents stand just one game behind Fall Mountain in the division standings and could knock it out of the playoffs.

The ’Cats know how easy it is to miss playoffs, having missed the cut with an excruciating loss in the final game of the regular season, and they don’t want to repeat that heartbreak.

“I think they’re feeling confident, but not cocky,” Binney said of his players. “I remind them pretty often of what happened last year. What’s different from last year is we’re in the driver’s seat; if we win out, we’re in. I tell them, you don’t want to wait and sit around the computer and hope for help after our last game.”

Robert Clauss, like Patnode, knew he was coming into a tough situation with his new head coaching job.

Clauss became the fourth coach the Cougars have had since June 2018, and took over a team that went 1-8 last season.

ConVal matched that one win this year with a season-opening win over Kingswood, 21-17, but has since suffered five straight losses.

“No one likes to lose on a regular basis, but we’re taking steps each week and getting better,” Clauss said. “We’re basically starting seven sophomores and three juniors, so we’re a jayvee team that’s playing a varsity schedule.

“It’s just growing pains for a program that’s trying to take the next step.”

Through this tough stretch of five games, the Cougars have been shut out four times and managed just seven points in the other game as they try to get the hang of their flexbone triple-option offense. On the other side, the defense has allowed at least 35 points in each of those losses.

“There are positive things,” Clauss said. “They are learning the offense. It’s a difficult offense to run, and they’re starting to grasp it.”

Clauss said he remains patient in growing the program, knowing that a strong team isn’t built in a day.

“This has always been a three-year plan for me,” Clauss said. “I think we stand a good chance at being competitive in the next two games, and hopefully being successful in the last game, and that means we double our record from last year.”