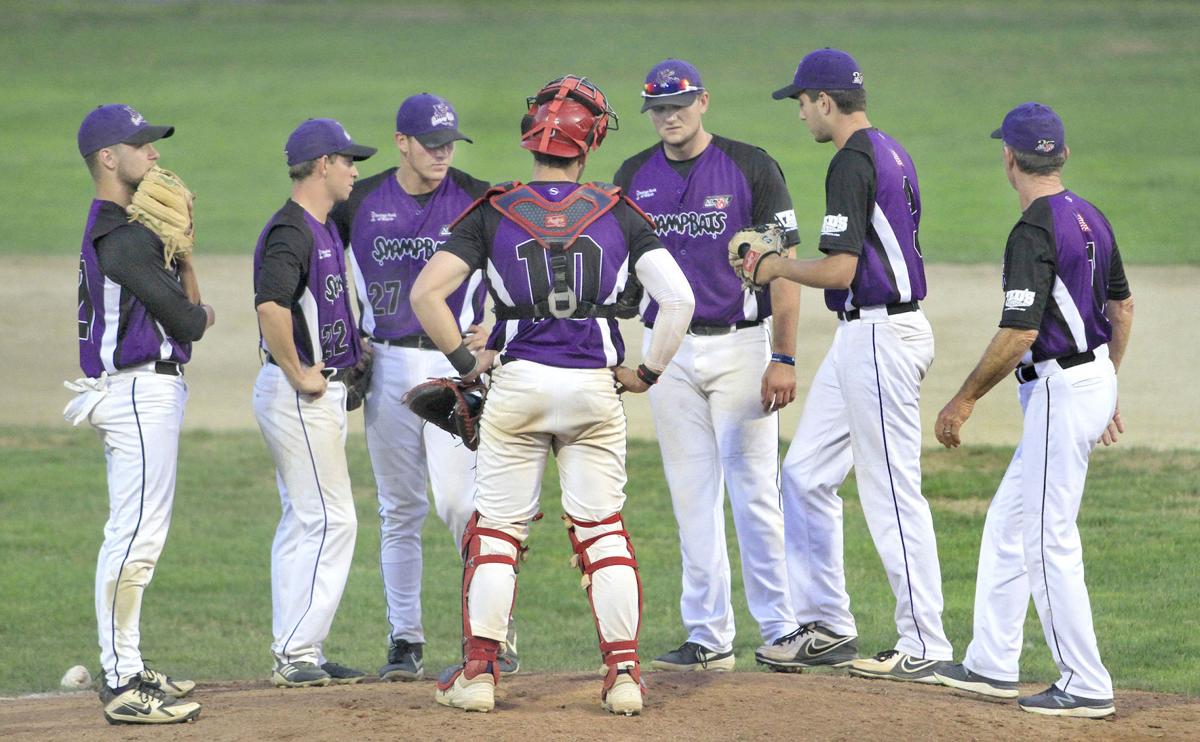 2019 Keene SwampBats Manager Gary Calhoun, right, meets his players at the mound for a pitching change in the 2019 regular season finale at Alumni Field in Keene. Calhoun brought in Mike Bacica, who is one of two players returning for the 2021 season. 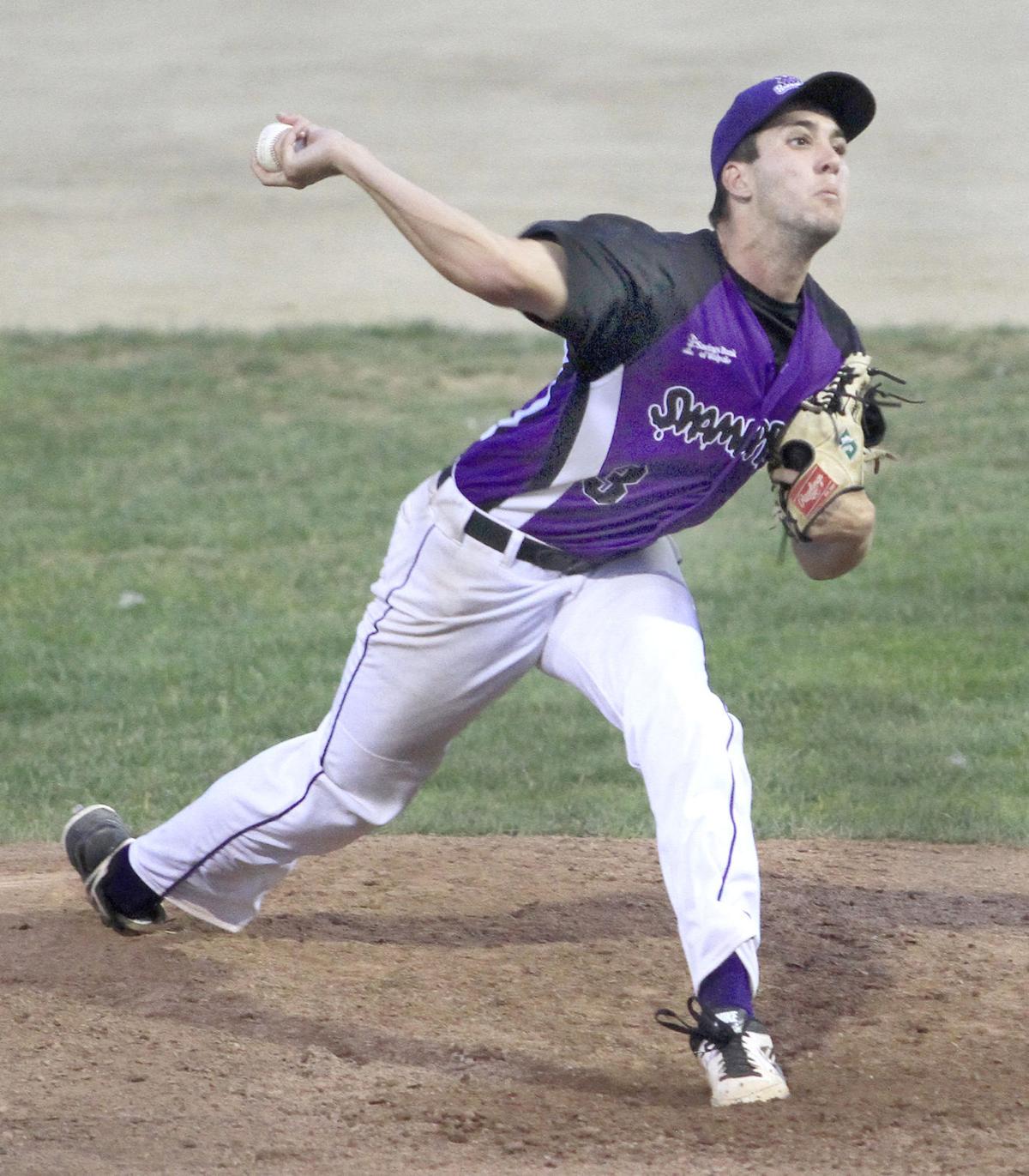 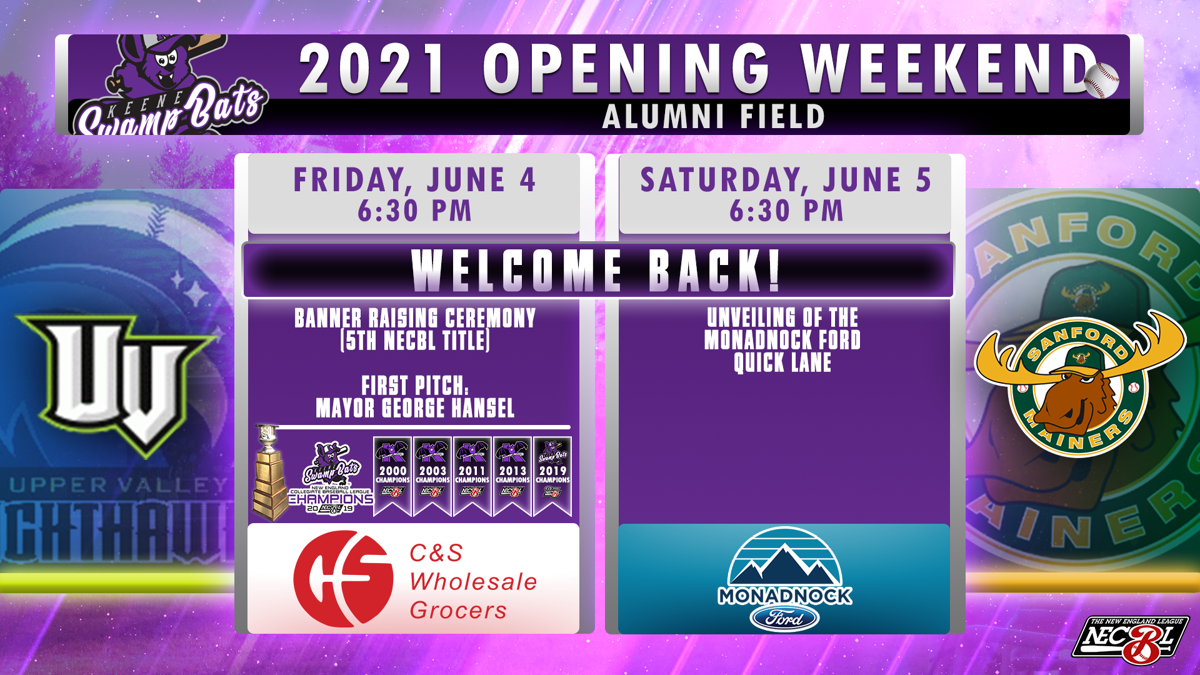 2019 Keene SwampBats Manager Gary Calhoun, right, meets his players at the mound for a pitching change in the 2019 regular season finale at Alumni Field in Keene. Calhoun brought in Mike Bacica, who is one of two players returning for the 2021 season.

Buckle up, Keene. The SwampBats are back in town.

The SwampBats will be defending their 2019 NECBL title with another core of young talent coming from some of the top college programs across the country.

Things to know before heading to Alumni:

McKenna was slated to be the SwampBats manager during the 2020 season, but instead had his debut delayed until this summer. McKenna is an assistant coach for the Division III Southern Maine University baseball team.

“It’s been a long time coming for everybody,” McKenna said. “The community, the SwampBats organization, myself, my staff and of course the players. I’m fired up.”

“The SwampBats organization is one of my favorites in all of baseball,” McKenna added.

He will be assisted by Erick Zecha, a former SwampBats pitcher for two years. Zecha will take an emphasis on the pitching staff.

“He’s definitely a community guy, he’s from Keene,” McKenna said. “I couldn’t be happier to have him around. He’s a great liaison for our team.”

Tim Lombardi will also serve on the coaching staff. He played catcher and first base at Johnson & Wales. Lombardi will serve as the hitting and defensive coach.

“We have a very young, talented coaching staff,” said team president Kevin Watterson. “They’ll bring a lot to the party for our players.”

Watterson said that a main focus this summer is to ensure the safety of everyone at the ballpark, so the team will be following any COVID-19 guidelines put in place by New Hampshire Governor Chris Sununu. Currently, there are no limitations on crowds at outdoor events.

Watterson also said that masks will not be mandated at the ballpark, and it is up to each individual to decide whether or not to wear a mask while enjoying the game.

“As a non-profit, outdoor, non-business classified entity, the SwampBats will not mandate masks, leaving that choice up to individual fans,” Watterson said. “We will follow the Governor’s guidelines relative to distancing.”

The concession stand and restrooms will be open at the ballpark and will be professionally cleaned after each game.

All players, coaches and interns will be required to be vaccinated, Watterson said. The decision to mandate vaccination comes with the safety of host families in mind.

The NECBL is split into two divisions with seven teams in each division. Teams will play the entire regular season against divisional opponents to limit travel throughout the season. Each team will play each other seven times to make up the 42-game regular season.

After the regular season finishes Aug. 1, the teams will be seeded 1-7 in their respective division.

This year, all 14 teams in the NECBL will make the postseason. The first round of the playoffs for each of the two divisions will be set up as follows:

The top seed in each division earns a first-round bye, while the other six teams compete in a single-elimination play-in game.

After the one-game play-ins, the divisional semifinals and finals will be played as a best-of-three series.

The North and South division champions will then play in a three-game NECBL championship series to determine the 2021 league champs.

The SwampBats roster changes frequently throughout the year, but the staff is optimistic about the guys they currently have lined up for this year.

“We feel very good about our talent that’s coming to Keene this summer,” Watterson said.

“The team is going to change,” McKenna said. “But I’m excited to see these guys in person.”

One storyline to follow throughout the season will be the competition at first base this summer. Watterson said there are three guys competing for the position and hopes to fit all three of them in the lineup — whether it means putting one in the DH spot and/or moving one of them to another position on the diamond.

Drake Wescott, Noah Martinez and David Williams will be competing for that spot at first base.

In addition, Michael Bacica and Thomas Joseph will be returning to the SwampBats to try to help bring another title to Keene.

“Two guys that wanted to come back to play for the SwampBats because they love it,” McKenna said. “You have to get excited about them. We are defending champs and they were there and a big part of that team.”

Keep an eye on closer Kaleb Corbett as well this summer. Corbett is currently the everyday closer at the University of Louisville and has the talent to be a difference-maker in Keene this summer.

“[Corbett] is lights out,” Watterson said. “He’s going to be a big-time pro when he gets draft eligible.”