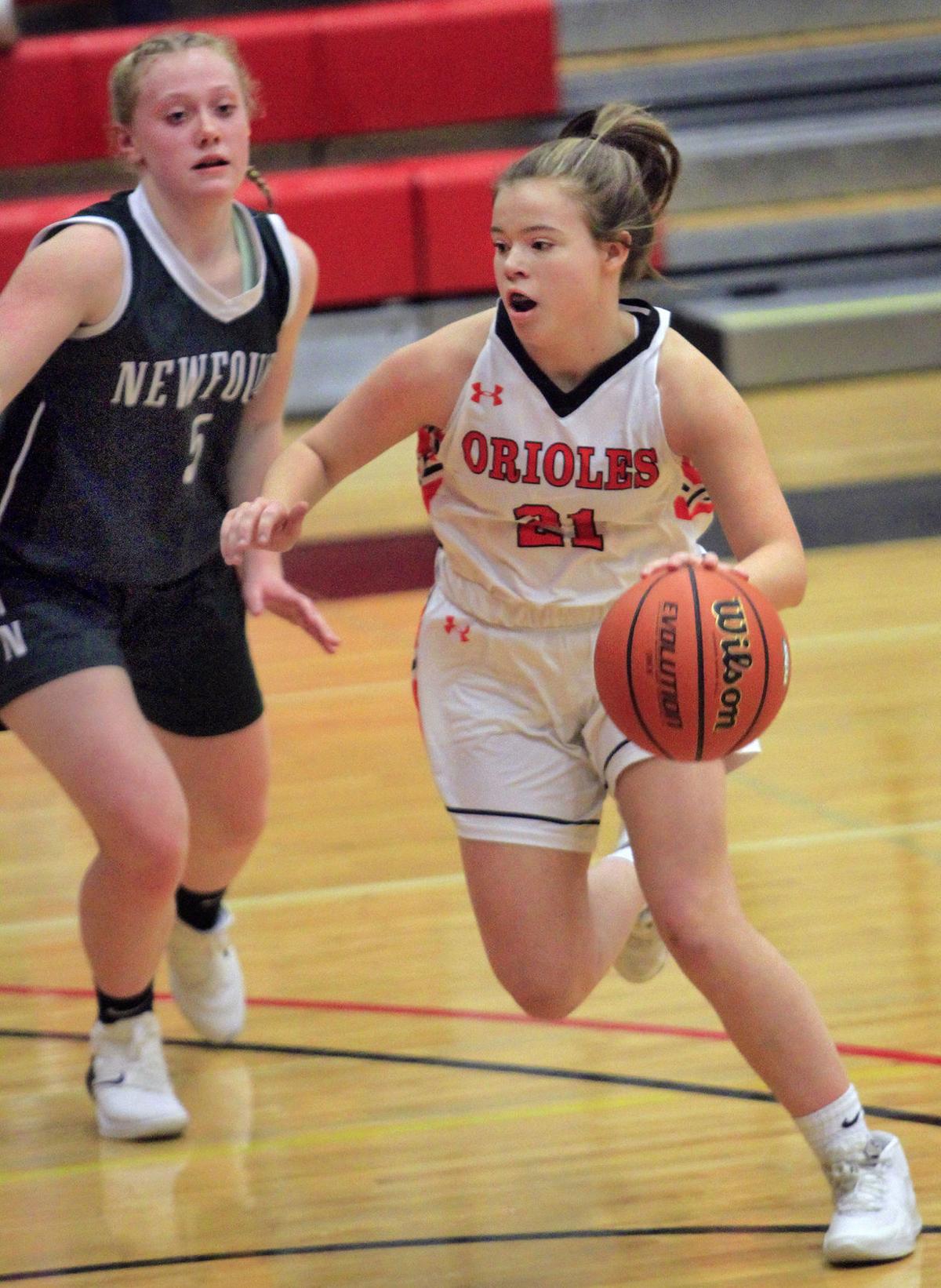 Conant’s Reagan Despres moves the ball against Newfound during the semifinal round Wednesday. 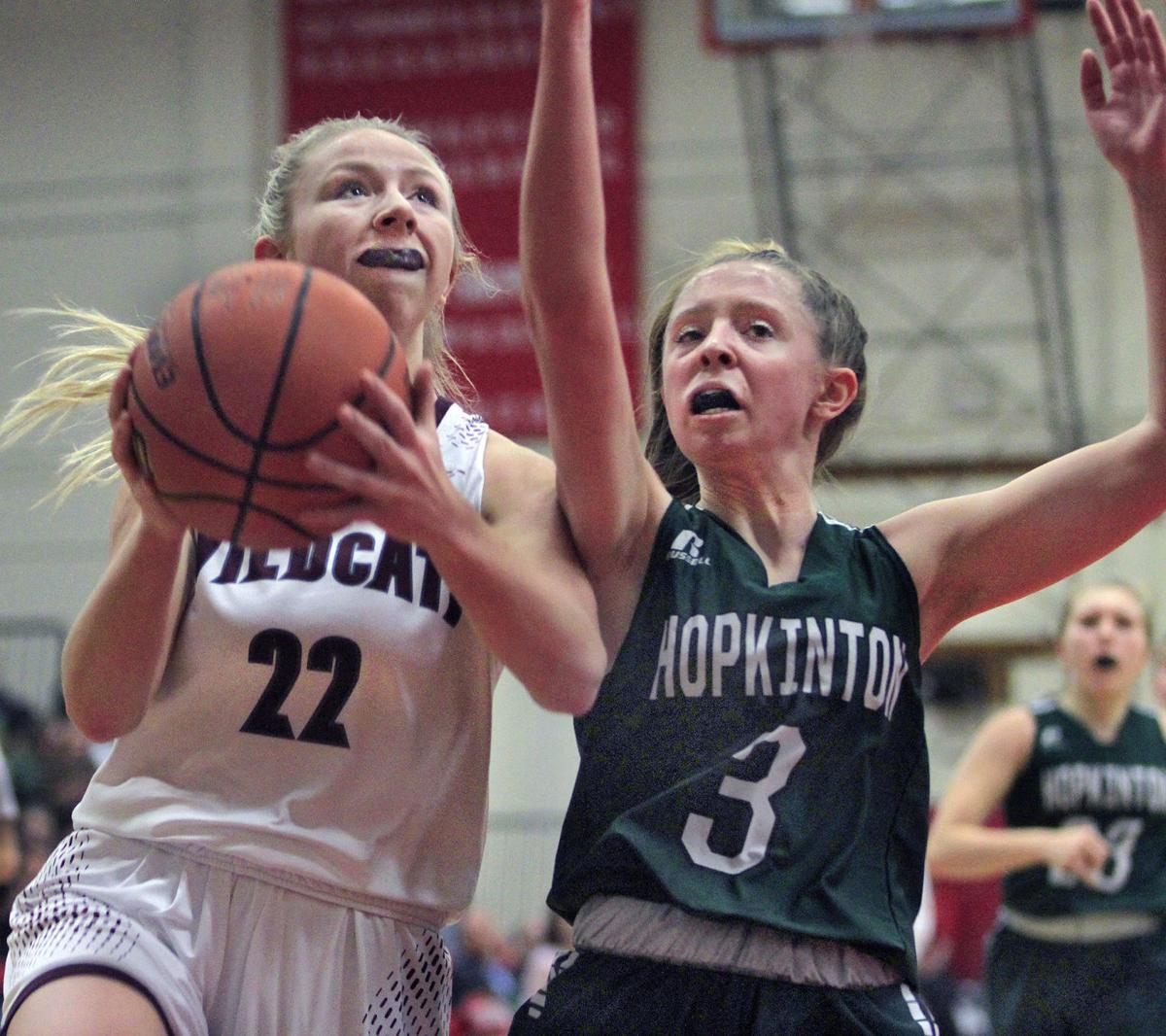 Fall Mountain’s Makenna Grillone, left, goes to the hoop against Hopkinton in the semifinals at Keene State College on Wednesday.

Conant’s Reagan Despres moves the ball against Newfound during the semifinal round Wednesday.

Fall Mountain’s Makenna Grillone, left, goes to the hoop against Hopkinton in the semifinals at Keene State College on Wednesday.

With the fans from the Fall Mountain Regional High and Hopkinton game dispersing, the Conant and Newfound fans piled into Spaulding Gymnasium Wednesday night. Wildcats head coach Matthew Baird-Torney was relishing a hard-fought 10-point win but knew “the puzzle” of the Orioles was likely on deck.

Two hours later, that likelihood became reality as the No. 1 and No. 2 seeds will meet again this Saturday night back at Keene State College with the winner capturing the NHIAA Division III girls basketball championship.

“It seems like all year in the standings it’s kind of been us and Fall Mountain at the top,” Conant coach Brian Troy said. “It’s never really kind of changed. I think it’s what people want to see, too. To have Fall Mountain and Conant play at Keene State, I think it’s going to be a great atmosphere and I’m really looking forward to it and I know the girls are too.”

The two have not only played twice this season, both Conant wins, but also met last year in the semifinals, a 45-44 upset win for Fall Mountain. This season, the Orioles won the first meeting 66-47 in the second game of the year and then 66-36 on Feb. 19.

The Wildcats hope to play spoiler again, this time with a win sending them home as state champions for the first time since 1983. It is their third appearance in the title game since 2014. Last season, the Wildcats fell to Monadnock Regional 51-44 and in 2014 to Campbell 57-41.

In last year’s matchup against Conant in the semifinals, the Wildcats were led by Zoe Utton’s 13 points, 13 rebounds and six steals. Utton also scored a game-high 21 points in the championship game for the Wildcats. With Utton now graduated, Fall Mountain will look for other players to step up.

“From our end, obviously, it’s easier to point to last year and say they had a lot of the same players,” Fall Mountain coach Matthew Baird-Torney said. “(Silas) Bernier is running point, (Elizabeth) Gonyea is obviously just as good and we saw success against them. We played well defensively and we had a lot of the same players. The other side to that is we have seen in the first two matchups this year with Conant that us knocking them out as a No. 1 seed isn’t lost on them as well.”

In the semifinals against Hopkinton, Fall Mountain had to knock down free throws down the stretch, something it struggled with last year to let Conant back in the game. Against the Hawks Avery Stewart hit seven straight free throws in the fourth quarter to seal the win. Last year against the Orioles, Fall Mountain went 4-for-9 down the stretch against Conant. After entering the final eight minutes with a seven-point lead, the Wildcats just hung on.

“The difference may just be the year. That was our first time on the big stage and so the nerves set in and we can live with that,” Baird-Torney said. “But this time around, in the Hopkinton game, we had to hit free throws and that’s just what we did. So going into this one, we’re hoping to get more opportunities at the line. But what a difference a year makes, having experienced both the lows and highs. Even with this group, without seniors, they can still lean on each other’s experience from last year and that will serve us well.”

Just like last year, the Orioles come in as the No. 1 seed in the tournament and will be looking to avoid an upset. They are seeking their record eighth state championship and first since winning two years ago.

Gonyea, a junior, will look to have another big game after scoring 15 points in the matchup last year, tying for team-high with now graduated Mariah Chamberlain. Gonyea had a chance to tie the game with 14 seconds remaining last year at the free throw line and down two points but missed one of the two, ultimately proving pivotal. If the three-sport star gets that chance again, the outcome may likely be different.

“I have total confidence in Liz,” Troy said. “I think she really wants those moments. She’s prepared well for those moments again. And I think she’s learned too from last year. She’ll be ready to go.”

This afternoon at Keene State has the opportunity to once again be a game to remember despite the regular season results between the two.