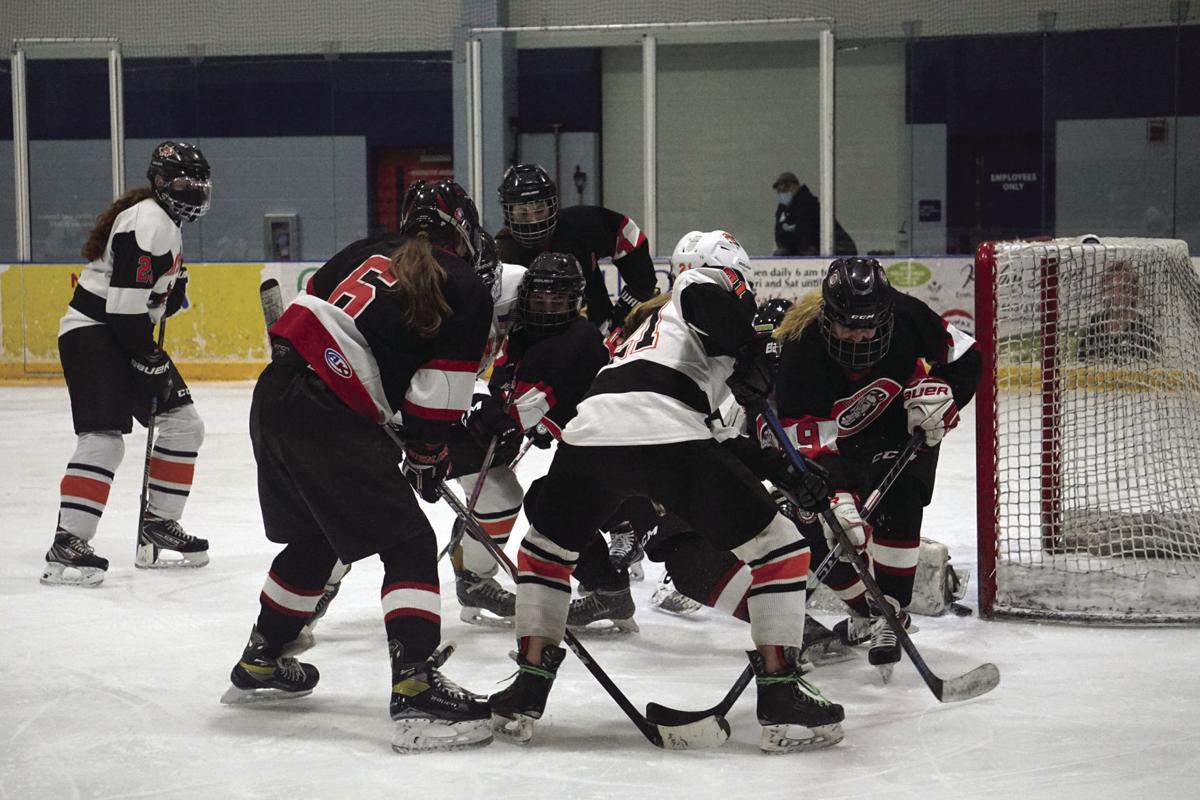 Sophomore Camden Ladzinski (21) sneaks the puck through a crowded crease for the overtime game-winner in Tuesday’s NHIAA tournament win over Bedford at Keene Ice. 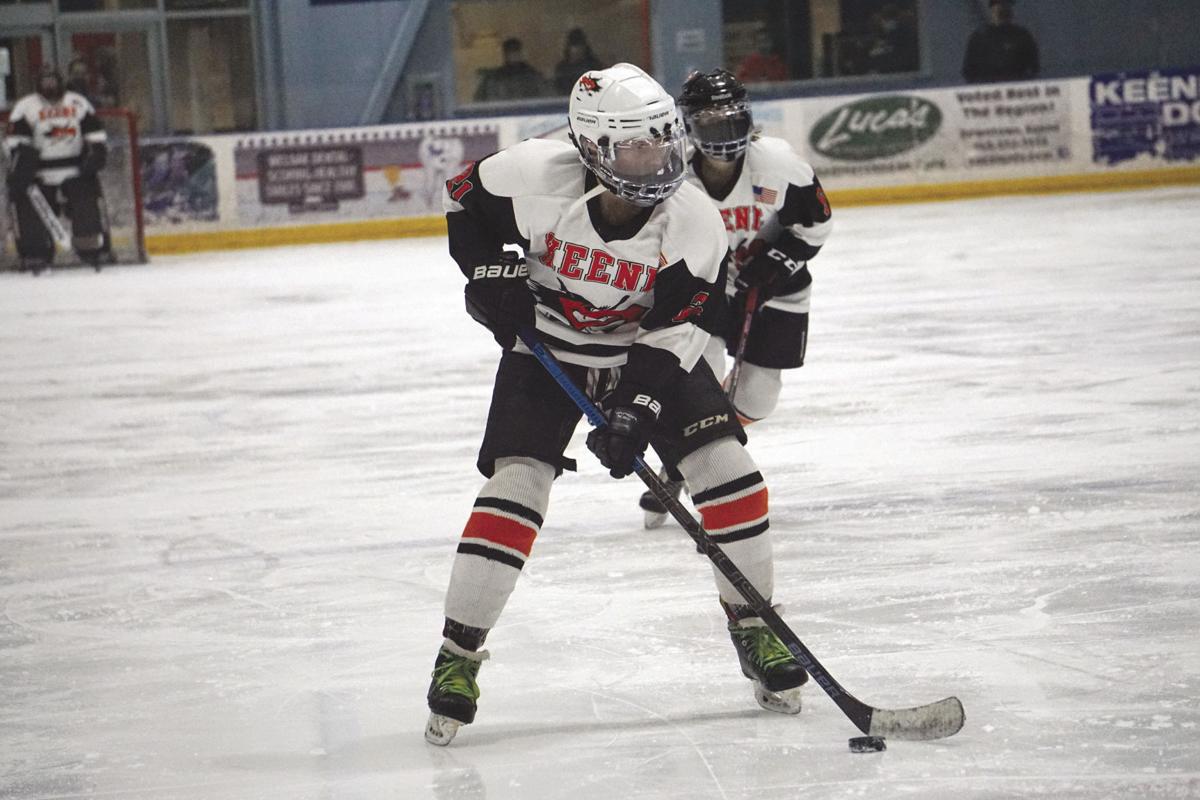 Sophomore Camden Ladzinski (21) skates with the puck during the overtime period of Tuesday’s NHIAA tournament game against Bedford at Keene Ice. 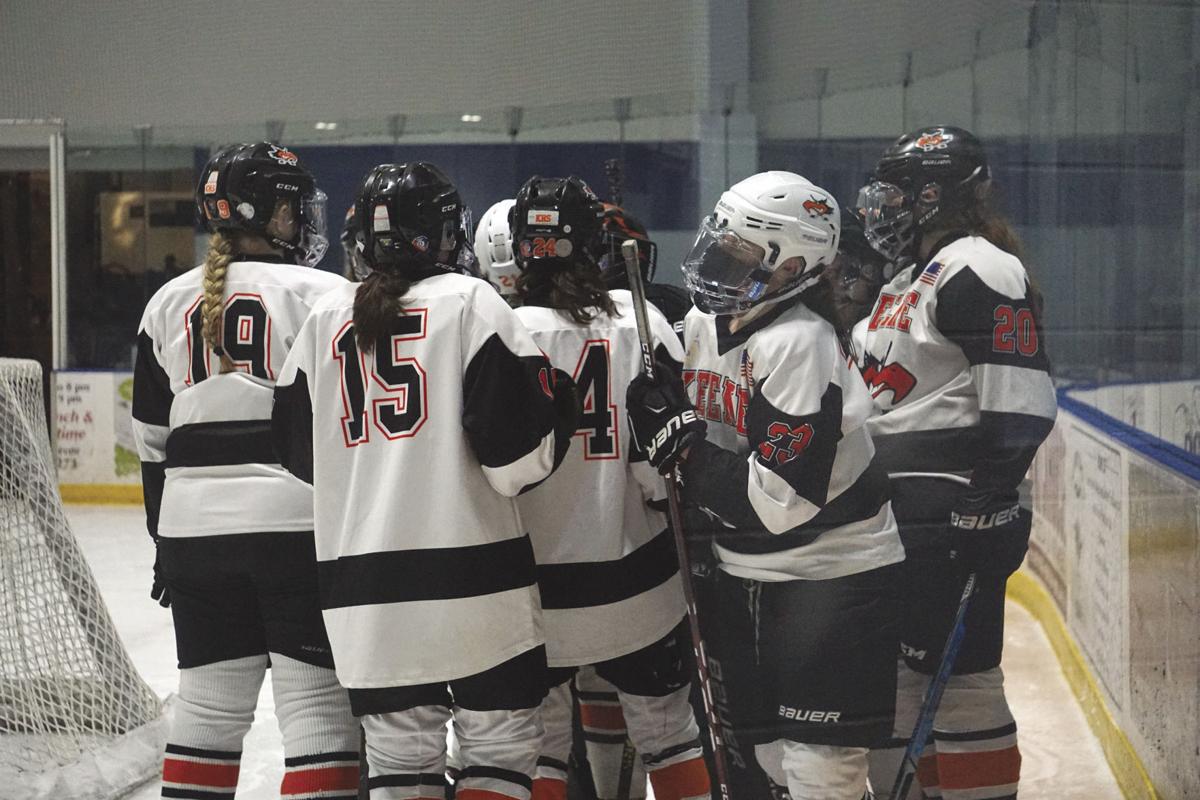 The Keene High girls hockey team celebrates its overtime win over Bedford in the first round of the NHIAA tournament on Tuesday at Keene Ice.

It seemed fitting when Tuesday’s NHIAA tournament first-round game between the Keene girls hockey team and Bedford went to overtime.

This is playoff hockey.

And it’s Keene that advances in the bracket, thanks to sophomore Camden Ladzinski’s second goal of the night, with 2:31 left in the extra period in front of a crowded net, which pushed the Blackbirds over Bedford, 4-3, at Keene Ice.

“Just a surge on net,” said Keene head coach Chris Flood of the overtime goal. “We were getting shots, but all were from outside, and on that one a rebound presented itself, and the girls did what they were supposed to do.

“They just hounded, and it squeaked in,” Flood added. “It doesn’t have to be pretty.”

It was the third meeting of the season between these teams, with Keene coming out on top in the first two as well.

Keene had been building up to that goal, putting pucks on net consistently throughout the overtime period, but Bedford’s goalie, sophomore Amanda Ducharme, swatted them away.

Ducharme finished with 26 saves, 13 in the overtime period.

“She played a great game,” Flood said of Bedford’s goalie. “She kept them in it, especially in the overtime.”

Keene outshot Bedford 14-2 in the overtime period, which included a penalty kill for the Blackbirds.

Senior Madison Ladzinski, Camden’s sister, played a strong game in net for Keene, finishing with 11 saves, and seemed to settle in more as the game moved along.

But Bedford got one passed Madison Ladzinski on its first shot to take a 1-0 lead about five minutes into the game.

Outside of giving up that goal, Keene outplayed Bedford in the first period, putting nine shots on net to Bedford’s three.

But it was just a 2-1 lead for the Blackbirds at the first intermission, off of goals from senior Nelly Tattersall and sophomore Nadia Washer that came less than a minute apart.

Bedford flipped the script in the second period, tying the game early and continuing to put pressure on Keene throughout the frame.

With the game still tied halfway through the third period, despite Keene being shorthanded, Camden Ladzinski stole the puck in the neutral zone and scored on the breakaway, giving the Blackbirds the late lead.

“I think she played her best game of the season,” Flood said of the sophomore. “That first goal, she just blew by them. She’s a very determined young lady, so she got the job done.”

But, not two minutes later, Bedford returned the favor and knotted the game up again.

“It’s how you perform after you fail,” Flood said when asked about his message to the team after Bedford tied the game in the third. “You just have to step it up and keep the positivity going.”

And the whole team stepped up to end that third period and to win it in overtime.

Even on Camden Ladzinski’s game-winner, it took almost everyone on the ice in front of the net to finally get the puck across the line.

“Everybody just really crashed the net,” said senior Kristen Leslie. “It was a team effort more than an individual effort.”

“It was definitely chaos in front of the net,” added senior Camille Chamberlain, who had an assist in the first period. “Everyone was just pushing as hard as they could to get that last goal.

“As soon as I saw it go in … I jumped as soon as I could onto the ice,” Chamberlain added. “I wanted to go celebrate with my team because it was a whole team effort to get to that win.”

Keene next visits undefeated Bishop Guertin on Friday at 6 p.m. in the NHIAA quarterfinals.

Photos from the Keene High girls hockey game against Bedford on Tuesday March 2 in the first round of the 2021 NHIAA tournament at Keene Ice.