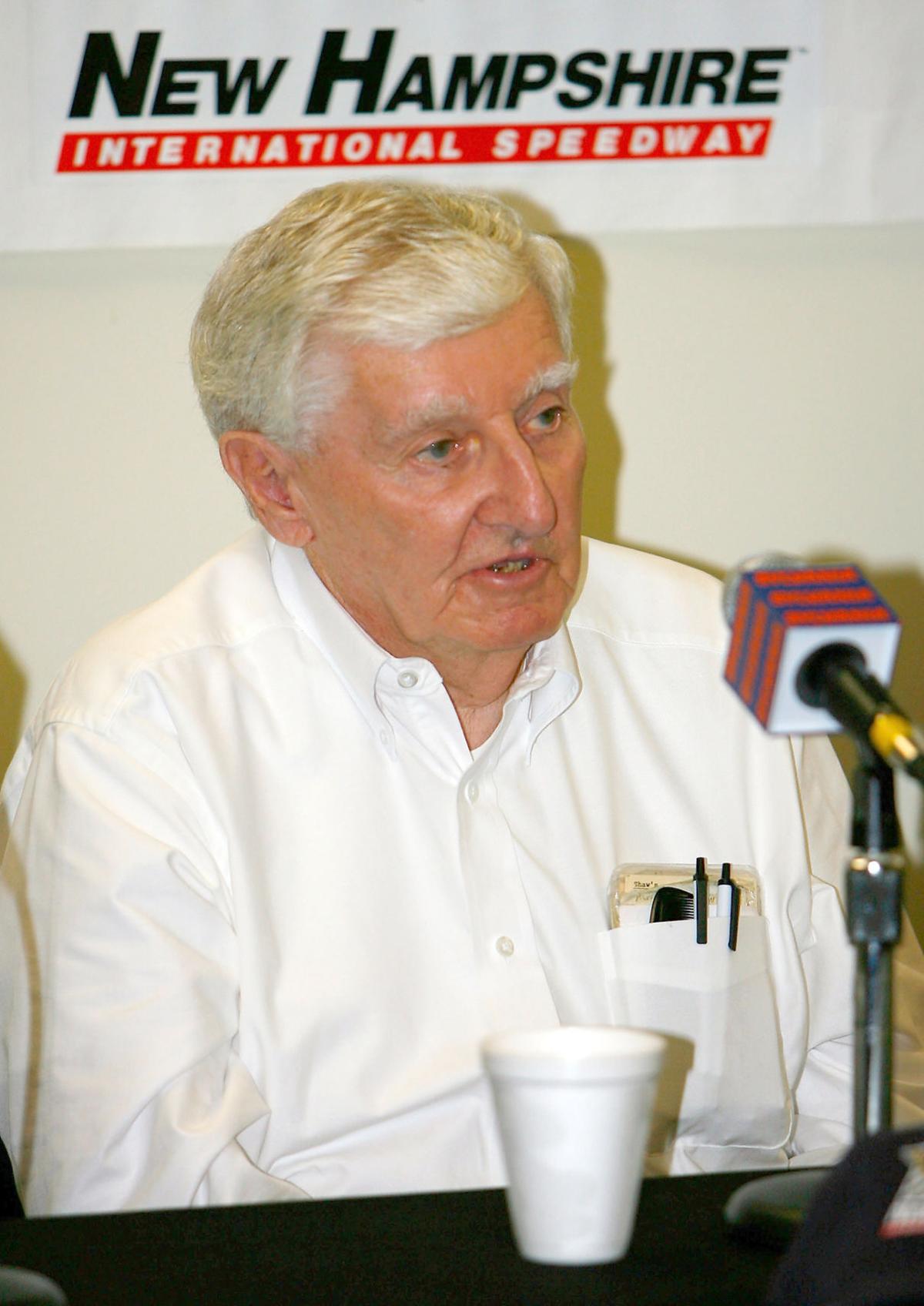 Bob Bahre, then chairman of the board of N.H. International Speedway, responds to question at a press confrence in 2006 in Loudon. Bahre died last week. 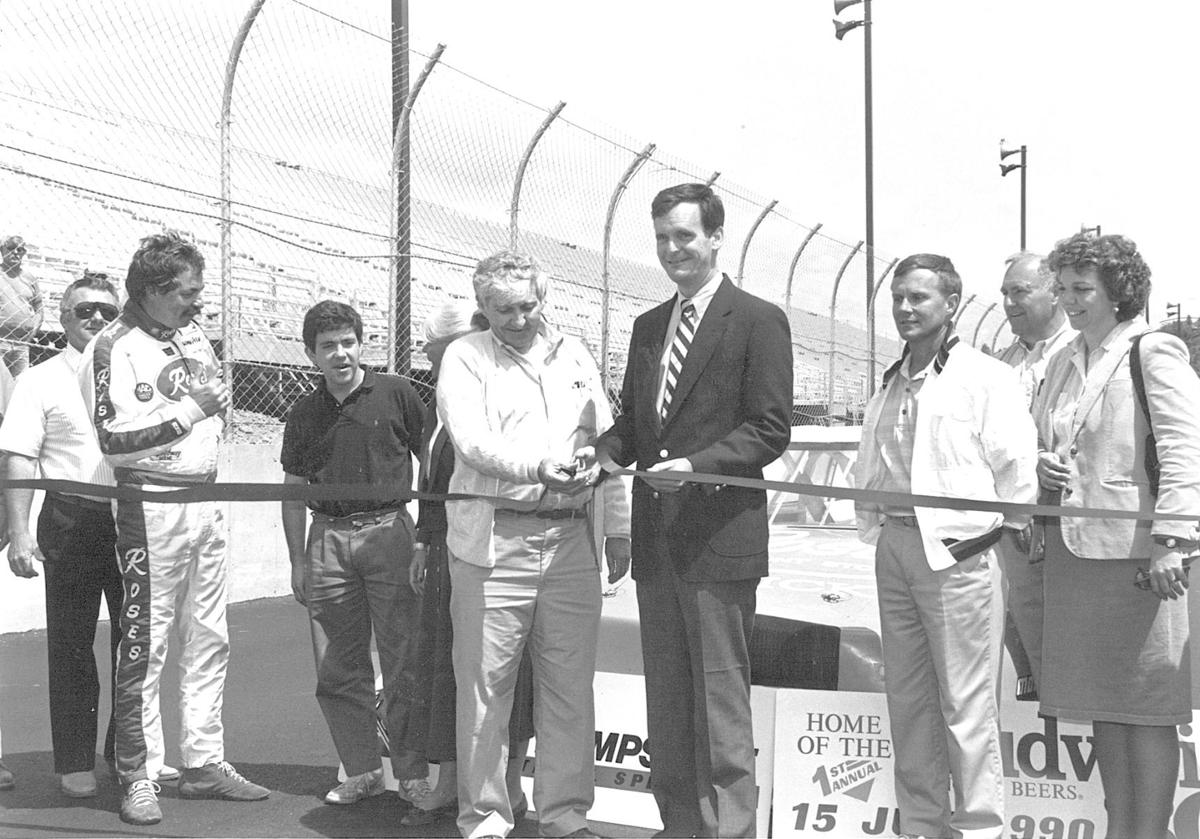 Bob Bahre, then chairman of the board of N.H. International Speedway, responds to question at a press confrence in 2006 in Loudon. Bahre died last week.

I first met Bob Bahre in the spring of 1989, in a cramped, old trailer on the grounds of Bryar Motorsports Park in Loudon. Let’s go for a ride, he suggested. So photographer Michael Moore and I joined Bahre and his son Gary in their four-wheel-drive vehicle and drove under the grandstands, onto the frontstretch and through the infield.

Of course, nothing was there that day. We eventually stopped and stepped into ankle-deep mud, Route 106 in the distance. I saw a timeworn dirt road course, used for the annual races during motorcycle week in Laconia, and acres of mud. Bahre envisioned a gleaming, multimillion-dollar racing facility that he would call N.H. International Speedway. We were standing smack-dab in the middle of the backstretch, he said, and pointed out where all the track features would be.

I’m not sure if he was wearing his trademark white shirt (never a tie), but it’s a safe assumption.

Bahre, the man with the vision, forthrightness, money and tact, who brought big-time racing to New Hampshire, died July 24 at his home in Wolfeboro at the age of 93. A memorial service was held Wednesday in Oxford Plains, Maine.

His voice was gruff yet friendly when we first met, and he seemed pleased that a sports reporter from The Keene Sentinel had shown an interest in his grand plan — to someday host a NASCAR Winston Cup race. NASCAR racing officials had supposedly told him his odds landing a race were “slim to none,” but Bahre was hardly a racing novice. He had built the Oxford 250 in Oxford Plains into the biggest, best and highest-paying stock-car race in New England, with racers coming from all around the country. He sold Oxford Plains in 1987 because building NHIS and landing a Winston Cup race for fans in New England was his ultimate goal.

More than three decades later, we know how it turned out. The mile-long oval did indeed become the center of speed in New England, awarded a NASCAR Cup race (then Winston Cup) a mere three years after its opening in 1990. And it added a second race in 1996. The name changed to N.H. Motor Speedway after Bahre sold it to Bruton Smith in 2007, and it will host its 49th NASCAR Cup race Sunday, the Foxwoods Resort and Casino 301.

The stories about the man are legendary, many revolving around his generosity and earthiness. Though he was a tenacious businessman and a millionaire many times over, he came across as Everyman. Some stories are lore, such as when Loudon officials balked at the building plans because the town didn’t have a fire truck with a ladder that could reach the press box. Bahre solved the dilemma by writing a check for a new ladder truck on the spot.

It was his word that counted most. Bahre assured the town he would use the track only for races — not concerts or other events — and he never deviated. He promised he would never install lights. When noise issues arose in the track’s early years, he worked with town residents, not against them. He worked with state officials to alleviate the traffic nightmares of the early years.

His relationship with Loudon officials was remarkably cordial for someone who intended to, and then remade, the small town in a colossal way. Twice a year Loudon swelled from a town of 5,000 to well over 100,000 on race weekends.

Though there were battles and Bahre could be fixated on what he wanted, selectmen through the years consistently praised his honesty and willingness to compromise.

One tug-of-war between Bahre and the town was his attempts to add seats in racing’s heyday of the 1990s and early 2000s. At one point, more than 20,000 names were on a waiting list for tickets. The seats were added gradually to ensure the area could handle the added influx of people.

By the way, he was a compulsive seat-counter. He thought that many racetracks exaggerated their seating capacity, and it bugged him, so he and Gary would put their math knowledge to use and hand-count the number of seats at NASCAR tracks they visited. Most often, he said, he was right, they were exaggerating.

Racing’s popularity was particularly heavy in the Monadnock Region, where the Bob Whitcomb Racing team’s foray into the national scene had a large following. Bahre, who always addressed me as “Keene” — as in, “Hey, Keene, how’s it going over there?” — loved talking and hearing about the Whitcomb team. Owner Bob Whitcomb lived in Keene (still does) and driver Derrike Cope won the Daytona 500 less than a year after Bahre and I met in the springtime mud. Bahre’s roots were in short-track racing, so he often asked about Monadnock Speedway and its doings.

Bahre and Bruton Smith, who owned multiple Cup tracks, had an interesting relationship that started fiercely. They both wanted two Cup races a year — Smith at his new Texas track — in what was a drawn-out heavyweight bout. They eventually acquired co-ownership of North Wilkesboro Speedway in 1996 and split its two races. But they remained competitive.

In 2001, the NHIS September race was postponed to the day after Thanksgiving because of the 9/11 attacks. Smith tried to wrestle the race to Texas, insisting the weather would be too inclement in New Hampshire in late November. The morning of the race, an unusually mild November day, Bahre jabbed back. He walked into the media room and grandly asked about the weather in Texas. It rained there all day.

Perhaps it was his quiet generosity that those who knew him best admired. His vaunted car collection alone was worth millions. But he was always writing checks to drivers and teams who near the bottom of racing’s ranks, especially in the New England-centric events such as the modified and Busch North races NHIS hosted. Drivers who didn’t qualify were paid as if they did.

In 2008, a year after selling the track to Smith, the Concord Monitor wrote about Bahre walking into the Egg Shell Restaurant and handing $450,000 to Loudon selectmen with specific instructions that they were to give it to churches, the library and students struggling to pay college bills. And don’t make a big deal about it.

It was vintage Bahre. Part of his lore was picking up trash after a race, easily mistaken as part of the cleanup crew if you didn’t recognize him, that some cynically thought was a public relations act. Yet it was something he had always done.

Bob Bahre didn’t mind trash in his hands or mud on his feet, especially when talking racing. In a sport dominated by conglomerates, he was one of a kind.