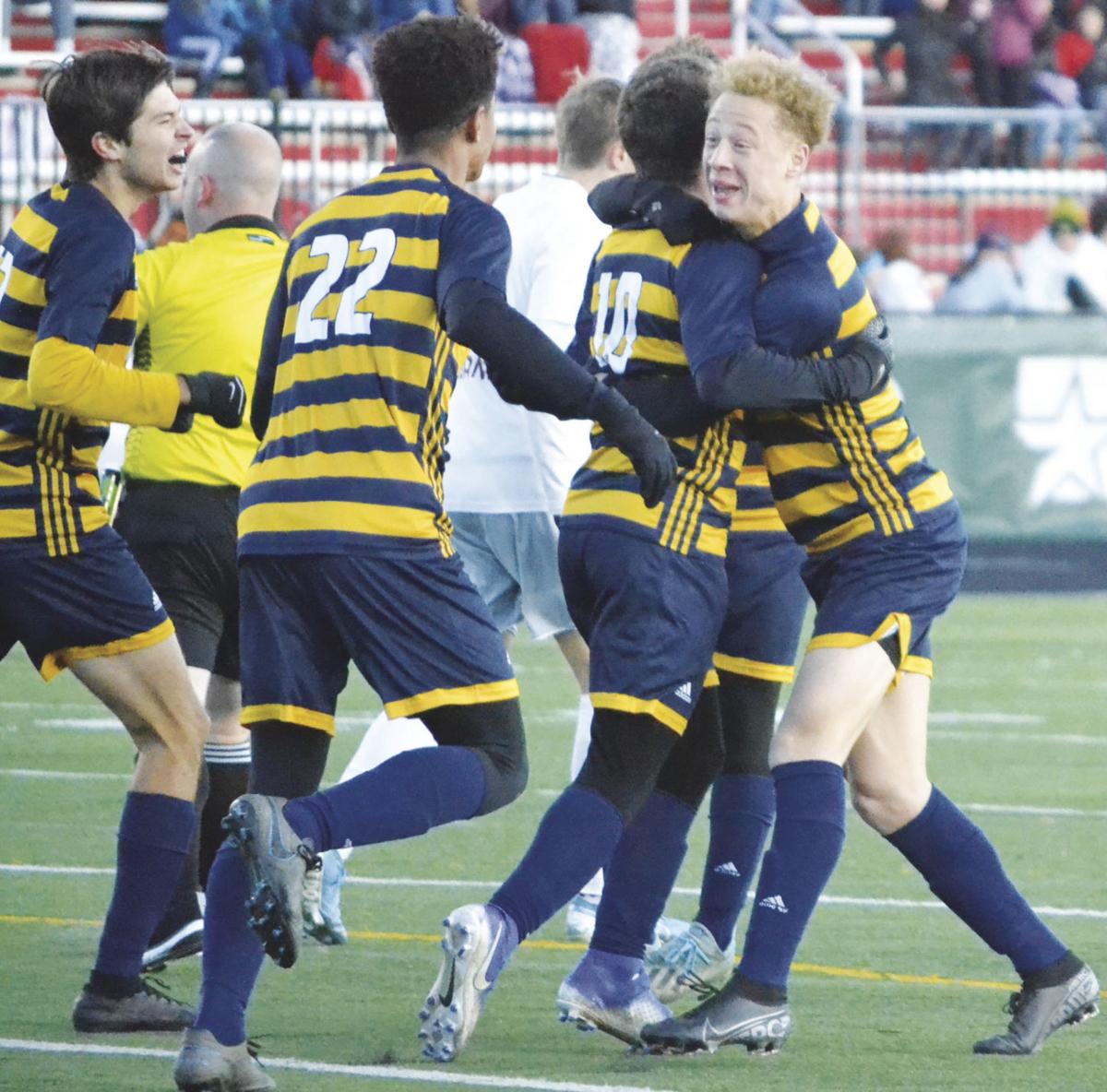 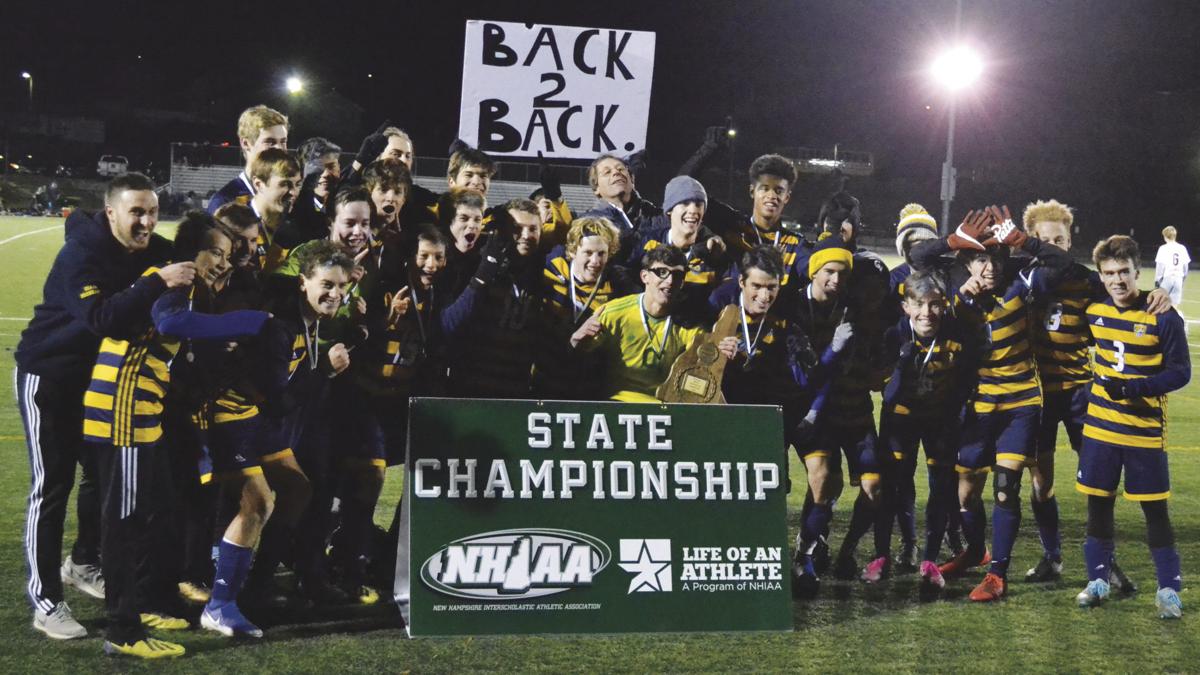 Despite the Cougars’ dominant 15-1 regular season record, it was a true Cinderella run for a program that not only graduated 12 players from the previous year’s roster, but had never won a state title in its existence.

This year was different.

As the defending champion with 16 players returning to its roster, ConVal now had a target on its back from teams across the league. The pressure was higher than ever before.

But champions always stand tallest when the pressure is highest, and that’s just what the Cougars did.

ConVal defeated Lebanon, 1-0, in Saturday’s D-II state final at Manchester Memorial High School, further cementing the legacy of the program, its coaches and its players.

“This one, I think it feels maybe even a little better than last year,” said ConVal senior goalkeeper Mather Kipka. “It’s a lot harder to get back and then win again for the second year in a row.

“I think this year we were really close as a team. (Coach Josh Smith) has been saying a lot, ‘Last year was for the community, this year is for us.’ ”

Adding to the contrast of the past two championship runs was the way the final games played out.

Last year’s title win over Coe-Brown Northwood was an explosive, blow-for-blow contest that ended in a 3-2 final — only the second time that season the Cougars’ vaunted defense had allowed more than one goal.

Saturday’s contest was a textbook ConVal outing. A strong core of defenders and midfielders kept the Lebanon offense at bay, and the Cougars seized their offensive opportunities when they came.

In this game, ConVal’s biggest opportunity — and also its only shot on goal — came in the fifth minute.

A corner kick by junior Max Shumway floated into the goalie box, where senior defender Casey Jordan scored on an unconventional header — hitting the ball off the back of his head and into the net.

“Any time Casey just kind of throws his body in a weird way in the box, I’m not super surprised. It’s something we’ve seen before,” said Smith, who has now coached the Cougars to two championships in his first three seasons at the helm.

“He’s a kid that will do anything to throw his body at it and get anything behind it.”

What won’t show up on the scorecard is what led to that corner kick: a strong, teamwide push up the field, spearheaded by senior midfielders August Marshall and Finn Wegmueller.

Marshall carried the ball through traffic at midfield before passing it to Wegmueller on the right wing. Wegmueller blazed down the right side, eventually forcing his defender to deflect the ball out of bounds at the back end, setting up the corner.

“Like we’ve said, everything we do is together,” Smith said. “It’s really everybody that had the play in the midfield that led to (the goal). That was huge.”

Marshall was one of the injured players absent from the team’s last game against the Raiders — a 2-0 loss in Lebanon on Oct. 23, ConVal’s only loss of the season — and having him back for the rematch turned out to be crucial.

In addition to his efforts moving the ball upfield, he was also given the critical defensive assignment of containing Logan Falzarano, Lebanon’s ace senior midfielder who, according to Kipka, is a favorite to win Division II Player of the Year.

“He’s definitely one of our key players,” Jordan said of Marshall. “Having him on the team, especially when we’re playing a team like Lebanon, it’s crucial to us being able to win.”

The Cougar defense kept things well-contained in the first half, but in the second, the Raiders started pushing more aggressively, and small cracks started to show in the ConVal wall.

Lebanon had five corner kicks in the second half, as compared to one in the first, and those corners provided many of their best chances at the net.

The craziest one came early in the half, when a corner kick went into the box, and was deflected about a dozen times off someone’s head or foot until a foul was called on the Raiders — just before one of their players kicked the ball into the net.

“I went up for a header, and one of their players sort of hit me in the back of the head,” Jordan said. “I think that was the foul.”

The closest scoring chance Lebanon had came in the 54th minute, when some strong passing put the ball at Falzarano’s feet, and he dribbled around his man for a near-clean shot from the center of the box.

But Kipka showed why — despite a stout defense often limiting the number of shots he faced each game — he was named First Team All-State last year. He slid down into a blocking position and deflected the ball out of bounds from near-point-blank range, maintaining the lead.

“I saw it a little late, (but) I was able to get off my line just enough to cut down the angle a little bit,” Kipka said. “He hit it pretty hard, and luckily I got my hands in place fast enough — and playing goalie for so long, I’ve got pretty strong hands — and I was able to push it just enough to get it over the bar and keep it out of the goal.”

Lebanon kept up the pressure through the rest of the game — finishing with two free kicks just outside the box that came within seconds of each other during stoppage time — but the Cougars remained composed, and finished their 12th shutout of the season — just one shy of last year’s total.

“Their composure is exactly what you’d expect from a defending champion team with 15 seniors and 16 kids that were on the team last year,” Smith said. “When we’re in those tough moments, it’s nervy, but it’s probably more nervy for me than it is for them, because they’ve been through it a hundred times, so they know what they’re doing.”

Members of ConVal’s 15-player senior class spoke throughout the season about how they had been working together since childhood to get to where they are now. And for these guys, finishing on top was the perfect way to finish their high school careers.

“It’s got to be the best feeling in the world,” Kipka said. “The people that are on this team, I’ve been playing with them for eight or 10 years. They’re my best friends, and they’ve basically been my childhood. This is how I grew up.

“To be able to do it and end it all with this win, and how hard everyone worked together, it’s great, it’s got to be the best feeling ever.”