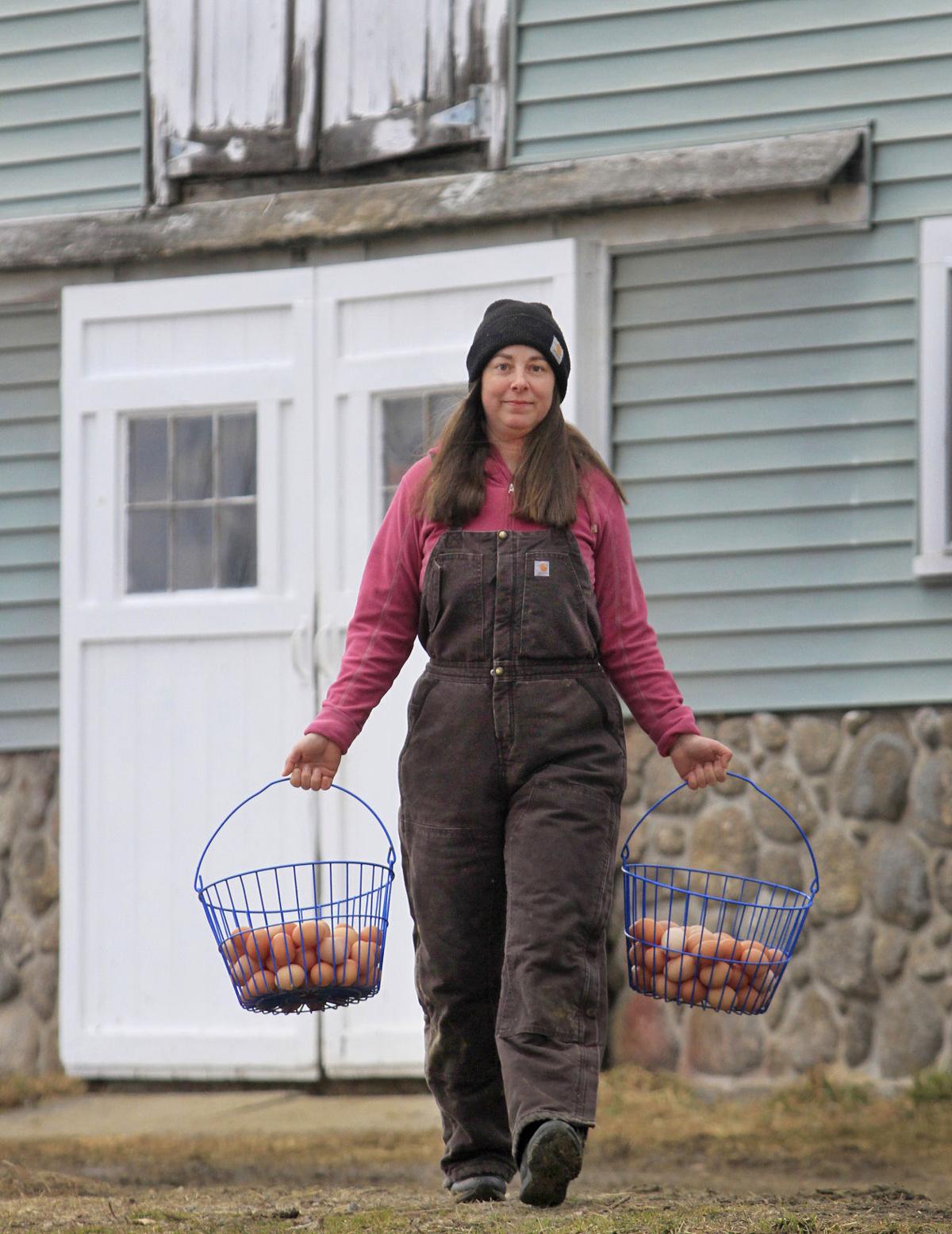 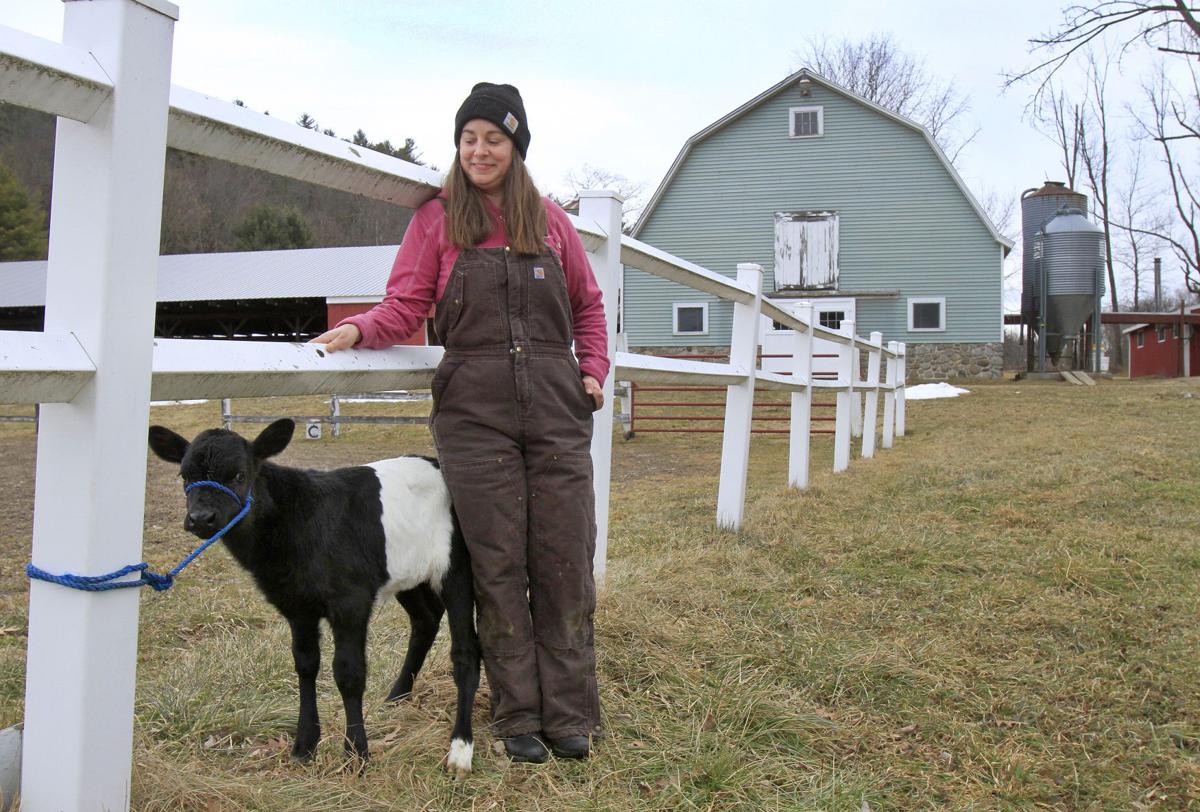 Sarah Costa with one of her calves at Manning Hill Farm in Winchester.

Sarah Costa with one of her calves at Manning Hill Farm in Winchester.

When stores wouldn’t buy milk from Manning Hill Farm in its first months in business, Sarah Costa could have thrown in the bucket. Instead, she stuck it out. Now she has a waiting list of stores.

Not just that — the farm is in the midst of more than doubling in size. It’s an anomaly in an age where farming continues to be tipped to the large-scale. At the same time, more and more are not only asking — but demanding — to know where their food comes from and want to support the small farmer by buying their products.

Costa and her partner in business and life, Sam Canonica, have been successful for one reason: they run a diversified business.

“If one part of the farm isn’t going well, there’s always another that can carry that part along, so you’re not just stuck on one product,” she says.

Their main shared goal has always been for the farm to be self-sustaining.

They started milking their herd of Dutch Belted dairy cows in 2010, but their plans to farm were formed long before then.

They grew up in two adjacent rural towns in Massachusetts, meeting in junior high school and having a shared passion for animals, the outdoors and farming — although they never thought farming full-time could be a way they could make a living.

Still, Costa, 37, pursued a bachelor’s in animal science at the University of New Hampshire with the idea of running a farm always in mind.

“Where (Sam and I) are from, we knew we could never afford to buy a good amount of land,” she says.

The house and barn were built in the late 1850s. While the land had been used for farming in the past, it hadn’t been since the 1950s.

The couple purchased the farm in 2006 and began working to reclaim all the old overgrown pasture land and converting the old barn back to its original state for the purpose of milking cows.

“In 2009, I did a lot of research and decided we needed to do something different,” says Costa. “I got this crazy idea that the only way for us to survive as a dairy farm was to bottle our own milk.”

That year they purchased their first nine cows and converted an old stone building that had been the original milk house into their milk processing plant. They both started farming full-time the following year.

“Everybody knows farming is a tough, stressful, risky business,” notes Costa. “Milk processing and bottling is a whole other job. There’s a lot to it.”

At first, no stores were familiar with Manning Hill Farm, so the couple had to work on building their brand.

In those early years, they had to dump a lot of unsold milk.

“So we got into pigs,” she says. “They can guzzle the milk, and they grow well. Milk-fed pork is delicious.”

Today Manning Hill Farm remains one of only five milk processors in the state — and the only one in Cheshire County.

They also raise and sell their own beef and eggs.

Everything they do at the farm centers on sustainability.

Each year they clear a little more of the overgrown woodland with help from their pigs, plant it into grass and rotational graze the pasture with their dairy cows and chickens to improve the fertility of the land.

Their methods for raising beef aren’t typical for a small farm.

“We have milking cows and young stock, and we also raise male calves born from dairy cows — that’s what our grass-fed beef is,” she says. “Most big industrial farms ship off the bull calves because they don’t have a real use — they are mainly raised for veal.”

They do it because they feel responsible for these animals’ lives.

“We have a moral obligation,” says Costa. “We raise them like our heifer calves. Their life on the pasture makes a better end product for customers. They have a better quality of life.”

The farm has a core group of local customers, and they get their fair share of business from out-of-staters; they also deliver products to stores within a 30-mile radius from the farm.

An important aspect of keeping the small farm model viable is to educate and lead by example, says Costa. The farm is a member of the Monadnock Farm and Community Coalition and offers a farm tour every August and for Keene State College students and local 4-H clubs as well as by appointment.

Just as crucial to sustainability is minimizing the effects of animal agriculture on the environment.

A 90-panel solar project on the cow barn is in the works to offset electric costs. Also, returnable (with deposit) glass milk bottles mean no plastic waste is created.

“When people buy from a local farm like us, it’s the best way to battle climate change,” she says. “You’re reducing CO2 emissions by reducing food miles (traveled to transport it). It’s a better way for everybody.”

Next, Costa plans to expand their product line. Paying off some startup loans this year has given them the breathing room to make upgrades in their milk plant and invest in more equipment.

“We’d like to do more flavors of milk and add pints and maybe even gallons to our half-gallons and quarts,” she says.

Two years ago, the couple purchased another farm — that one added 190 acres to the original 126. They worked with the landowner to put a conservation easement on the property, which had also been a dairy farm.

“It’s in more disrepair, and we’ve slowly been revitalizing it,” she says. “We’ve outgrown our land here.”

They also plan to start growing grains on a 200-acre property they rent along the Connecticut River.

While she calls small farming a battle, Costa would never consider doing anything else.

“It’s something we have to fight for, but it’s so worth fighting for,” she says. “There was a time when everyone grew their own food and neighbors traded it — food was the center of your community and your life. People have gotten so removed from their food and where it comes from. Small farmers need to bridge the gap between food and consumer.”

She views the Monadnock Region as ahead of its time in residents’ support of local farms.

“We picked the right place,” Costa says. “We’ve not only been able to stay in business but grow — and do what we want to do for 10 years.”

See the virtual yearbooks for each school here!