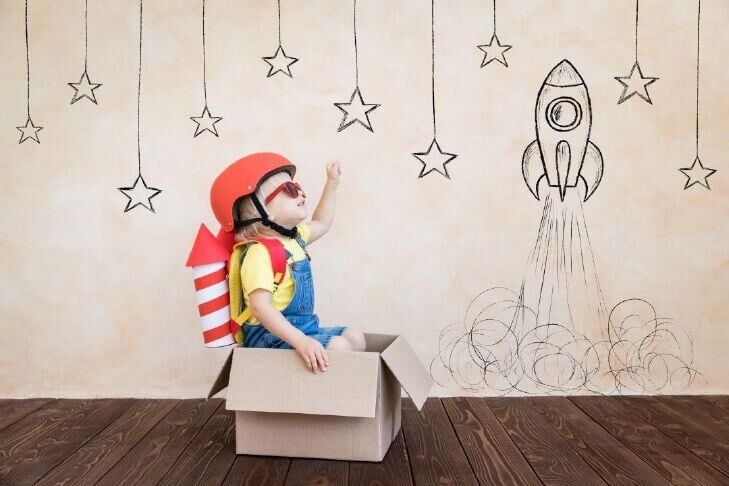 If were lucky, pretend play last well beyond our early years. (Big Stock) 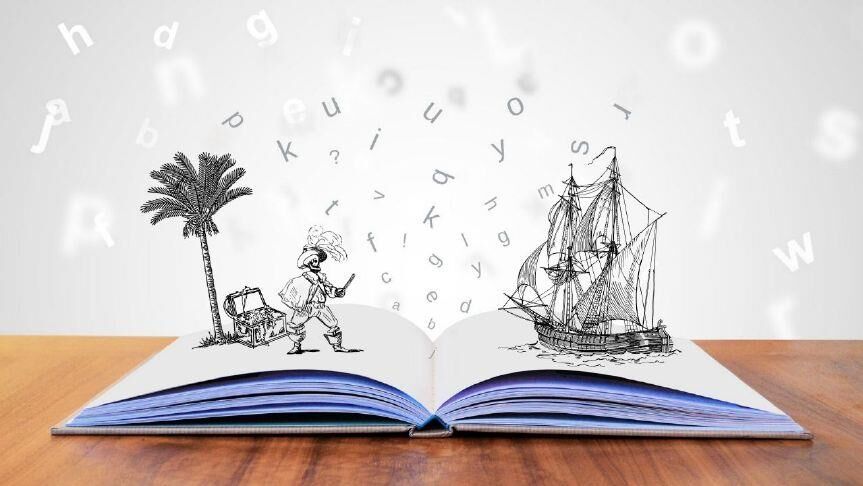 Aesthetic engagement is key when delving into the creative imagination. (Pixabay) 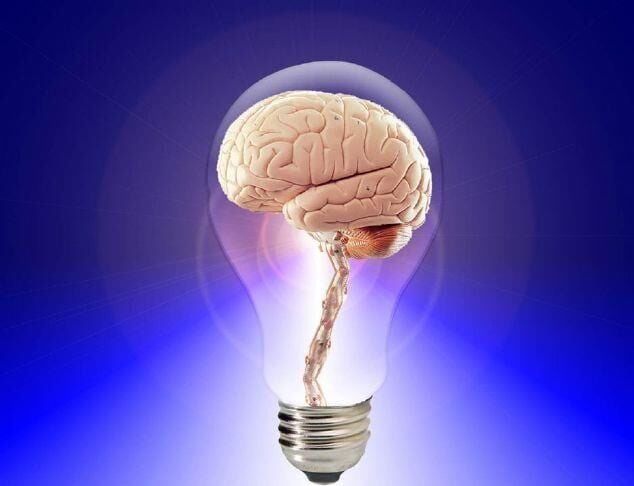 Imagination is born as soon as our brains are forming. (Pixabay) 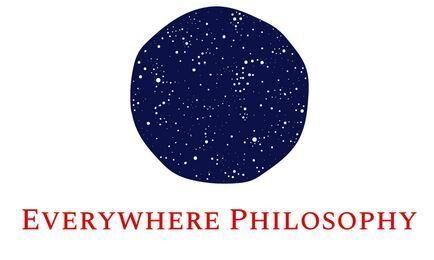 If were lucky, pretend play last well beyond our early years. (Big Stock)

Aesthetic engagement is key when delving into the creative imagination. (Pixabay)

Imagination is born as soon as our brains are forming. (Pixabay)

There’s a familiar story about imagination, which goes roughly like this: Imagination, whatever it may be, is not belief. For, there are glaring differences between belief and imagination. We don’t have to believe something to imagine it, for instance.

Imagine, for a second, that the moon is made of green cheese. Pretty easy to do, right? But of course, we don’t believe it. To believe something means that we accept it as true. That’s why belief typically ties so closely with perception, since our default orientation to the world is to believe what we see, hear, taste, smell and touch (and indeed sometimes we only see, hear, smell and touch what we believe).

Not so with imagination though. Unlike belief, the familiar story goes: imagination is lawless and romantic. Imagining does not imply accepting any given proposition as true. Imagination is fanciful, creative and unanchored to perception and reality.

The thing is, I’ve long suspected that this story about imagination is a fiction in its own right. When I published my dissertation in 2014 (Ohio State), I argued that scholarly accounts of imagination that segregate imagining from believing ultimately cannot do their explanatory jobs. The accounts I rejected — those casting imagination as the roguish, better-looking counterpart of belief — are the scholarly versions of the familiar story we’re looking at now.

My praise for imagination is definitely not that it’s the roguish, better-looking counterpart of belief.

I have other concerns, too, in addition to my worries over explanatory adequacy. I think the usual story assigns imagination an outsized mandate to track with what is fictional and unreal, or otherwise strictly false. Imagination, we’re told, is in the fantasy-game — the game of disconnecting us from, rather than teaching us about, reality.

Another misleading aspect of the story is that it tends to lead us to associate imagination with intellectual extremes. Imagination can easily be portrayed either negatively as unserious and undisciplined, or positively as a marker of intellectual superiority or even genius.

I don't think this story really furthers our understanding, as it obscures our view to the pervasive role imagination plays in all of our lives. And when I say “all,” I mean everyone… from the giants of academia and the geniuses of the art world, all the way down to toddlers first dipping their toes into the waters of pretend play. Since there’s so much cognitive ground between these extremes, I propose an ode to imagination that gives an atmospheric-level view. For this, I offer a brief series of reflections on the often-surprising ways imagination is interwoven with belief and perception, supporting a diversity of daily, sometimes mundane and automatic, activities and behaviors.

My hope is that this song-in-prose resonates with parents, educators and anyone even remotely involved with supporting learning and cognitive development — maybe even inspiring some to experiment with new approaches to making imaginative engagement with students, friends and family as pervasive a feature of life as the imagination itself.

Imagination, to thee I humbly sing…

Pretend Play: Within a couple of years of birth, children begin to engage in simple forms of pretense with props and prompting. The games quickly gain in complexity with the onset of language. Imagination is unsurprisingly invoked in explanations of how toddlers can simultaneously experiment with enacting pretend scenarios — for example, the banana is a phone, my toy car goes “vroom,” etc. — without becoming confused about category membership conditions. The banana is not really a phone, I’m the one actually going “vroom,” etc. And pretend play, if we’re lucky, extends well beyond our early years.

Folk Psychology: This just refers to our inherited practice of explaining behavior by referring to beliefs, desires and intentions. Interestingly, the early onset of pretense correlates (perhaps not coincidentally) with the capacity to attribute false beliefs. Toddlers learn to acknowledge that a vignette character only falsely believes that there’s a cookie in the jar, because (in the story) that character did not see that the cookie was actually removed. False-belief attribution is frequently seen as an indicator that a toddler has begun a new, more mature phase of theorizing about the minds of other creatures, understanding that individuals harbor different (sometimes false) attitudes about the world. Imagination is often invoked, in some form, to explain how toddlers begin to attribute mental states such as beliefs and desires to others in this way; for instance, by imaginatively simulating a perspective other than their own.

Empathy and Sympathy: Another related strand connects pretense and folk psychology with the capacity for emotionally engaging other minds. Since that capacity to understand and attribute mental states to others allows a budding psychologist to employ imaginative simulations of what it might actually be like to be someone else, it also may enable them to understand how others feel. For instance, a child may surmise that the character in the story is sad or angry because they believe there are no more cookies in the jar.

Planning and Prediction: Projecting desired or expected future states of the world seems straightforwardly to involve flexing the imagination. Each activates a visualization or a description of a future, not-yet-actual state — either desired, expected or both. Predictions and plans then underwrite further behavioral consequences, either to promote or to thwart the imagined future. But imaginative planning and prediction are firmly anchored in our beliefs about what’s true. Notice that this touches everything from grocery shopping to playing board games. Visualizing the future is a commonplace activity that seamlessly co-mingles imagination with belief.

Counterfactual Reasoning: Counterfactual analysis helps to uncover explanations and to support arguments and predictive analysis. If you want to know, for example, what would have happened if George Washington did not cross the Delaware River that fateful night, simply imagine that he did not. Then, assess what would have been likely to happen, holding fast a constellation of other beliefs about what actually happened. Imaginative counterfactual thinking supports reasoning in all corners of life, from the practical to the academic.

Analogical Reasoning: Analogies can reveal deep similarities between superficially dissimilar objects, events and relations. Everyone is familiar with SAT-style analogies, but the range is expansive. Philosophical thought experiments often tap into analogies to support an argument (think, for instance, of Judith Jarvis Thomson’s “famous violinist” and “people seeds” thought experiments). And it’s not simply an inconsequential, academic exercise — analogical reasoning is a bedrock of justification, in particular in legal reasoning. The highest courts in the freest nations rely on a process of evaluating how similar undecided cases are compared with better-understood, settled precedents. In all such cases, revealing relevant, sometimes invisible similarities promises to require sustained imaginative engagement.

Dreaming, Day Dreaming and Flights of Fancy: We probably hardly need much convincing that these daily occurrences involve imagination. That’s not to say how any of it works is particularly well-understood! Nevertheless, any account of dreaming will surely lean heavily on the imagination and will include ample reference to the role that mental imagery plays in our inner lives.

Aesthetic Engagement: Movies, novels, poetry and music! Theater and the myriad visual arts! All of it invites imaginative involvement, voluntary and involuntary. Both consuming and producing artworks seem clearly tied to imagination across a wide range of media. It’s a subject of considerable research, moreover, that we apparently learn from art. This draws into question any account that tries to sever the imagination’s connection to truth, belief, perception and reality.

There’s a great deal more we could look at here. And there’s also a whole lot of work to do to illuminate the true nature of imagination and its role in our cognitive lives. I have to acknowledge that my alignment of imagining with such a broad range of activities is not uncontroversial. You may very well look at all of this and think, is there really something called “imagination” that could possibly help account for and explain all of this? Fair question!

Yet there does seem to be some conceptual glue holding it all together, even if only tenuously. So many of these phenomena seem to depend on a capacity to entertain hypothetical (or non-actual) propositions, and perhaps mental models of objects, events and abstract relations. Most or all of the relevant phenomena deal in ideas and attitudes about possibilities that are not locally present to perception, and/or are not taken literally or as real.

So is imagination just the cooler cousin of belief after all?! My point here has neither been to completely rewrite that old story, nor to tell a completely new one. My praise is intended to highlight the relentless, seamless interplay of imagination and belief in our inner lives. It’s this mutually supportive interlacing of belief and imagination that I find most fascinating and perplexing.

The takeaways are supposed to be these: 1) Imagination, whatever we reveal it ultimately to be, is not confined to the merely possible, the fantastical or the fictional — it’s a conduit to truth and reality; 2) Imagination is not the birthright of geniuses, artists and some creative elite — it’s pervasively human; and above all, 3) Imagination is not exercised in discrete, compartmentalized and proprietary activities — it quietly, unselfishly buttresses a myriad of commonplace activities and behaviors.

We each spend vast swaths of our waking (and even sleeping) hours — maybe even most of our lifetimes — employing imagination. Now we use it to solve an algebra problem, now to evaluate an argument, now to resolve a moral dilemma, now to find our keys, now for entertainment, now we’re swept away by a dream, and so on and on.

Most everything in your life — from planning your post-COVID vacation to improvising a meal for your partner, to commiserating with a friend, to writing your novel — is touched by imagination. Taking all of these considerations, I increasingly subscribe to the view that we actually live in imagination.

So, in praise of imagination: Play on, you beautiful, brilliant, conundrum of cognition!

Michael Ferreira, Ph.D., is co-founder of Everywhere Philosophy. He is also a philosophy instructor at CCV and an intelligence officer in the Vermont Army National Guard. He enjoys discussing philosophy with children, teens and adults, and also writing about people, places and things. Get in touch anytime by emailing everywherephd@everywherephilosophy.info.