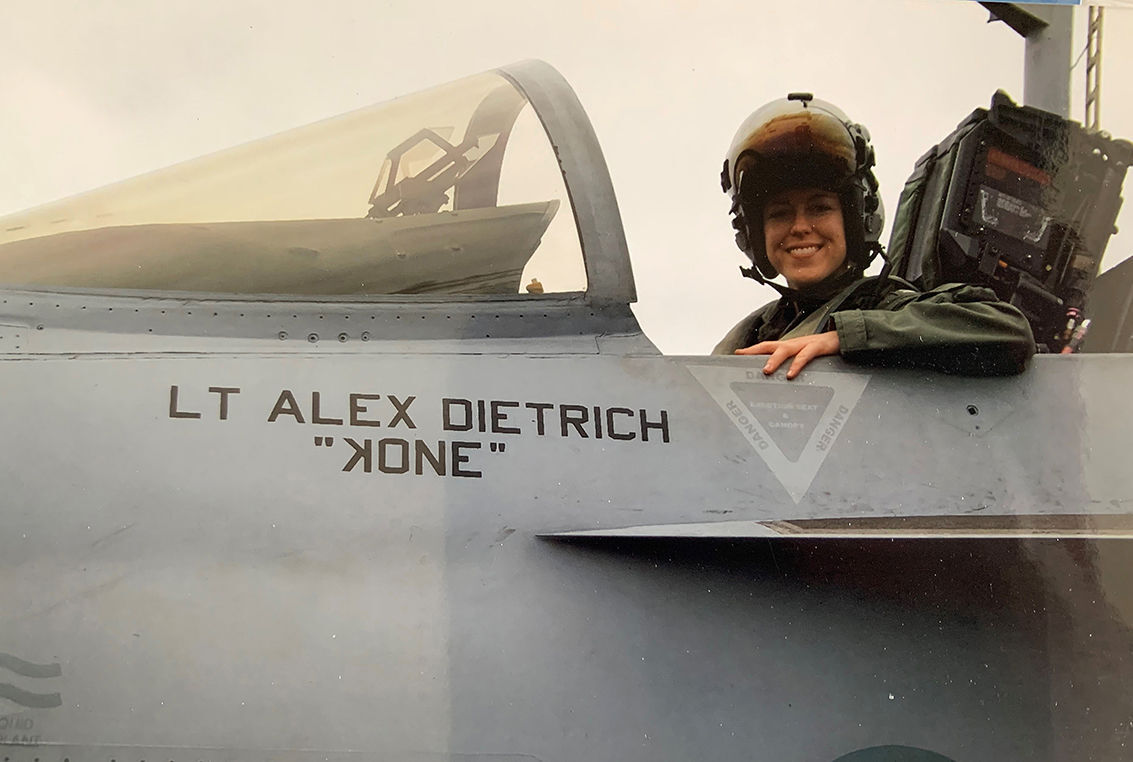 Lt. Commander Alex Dietrich sits in her aircraft, which she flew between 2001-2007, in this undated family photo. 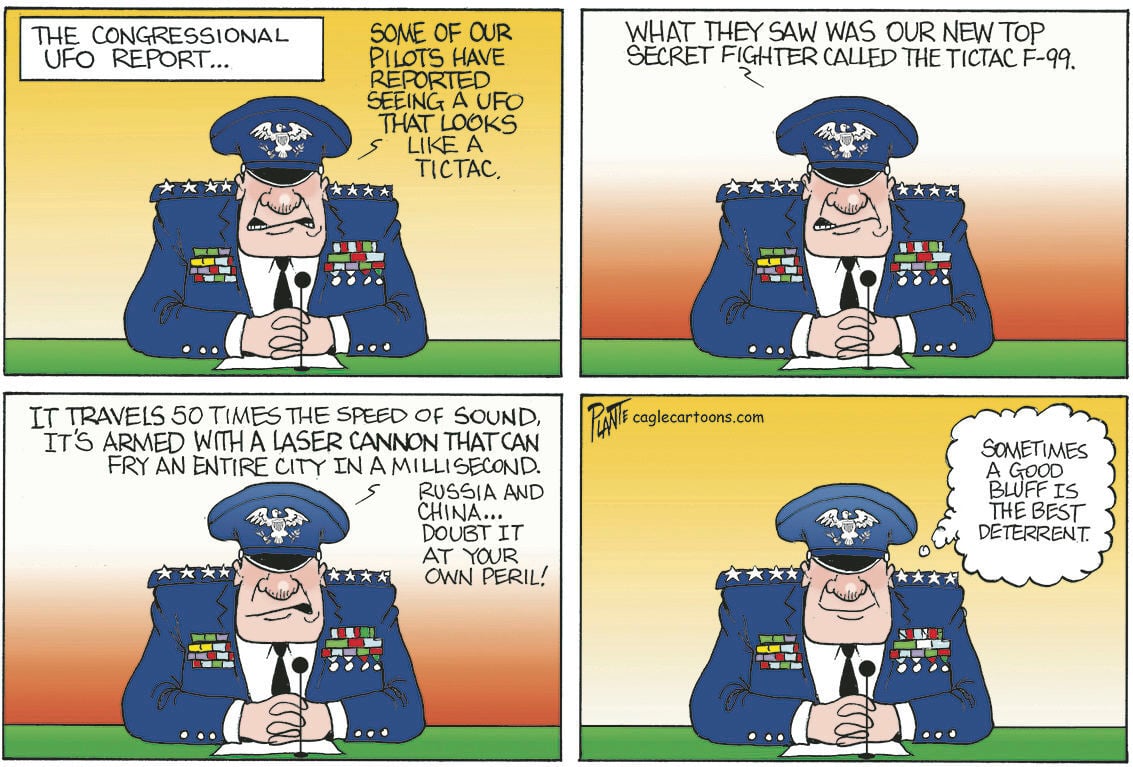 Lt. Commander Alex Dietrich sits in her aircraft, which she flew between 2001-2007, in this undated family photo.

She picked up the kids after finishing her last call at work — there was some whining in the back seat — and raced to her home near Annapolis, Md., for family dinnertime. In between, she answered questions about the UFO.

“My life right now is very surreal,” said Lt. Commander Alex Dietrich, who is a 41-year-old mother of three, a retired fighter pilot and one of the few people who gets regularly hauled into the Pentagon or before Congress for further questioning about the day in 2004 she saw a UFO — the Pentagon prefers to call them Unidentified Aerial Phenomena — from the seat of her Super Hornet in the skies near San Diego.

Dietrich is pragmatic, forthright and has a swaggery pilot’s sense of humor about this thing she’s been living with for nearly 17 years.

Thanks to a bizarro little line in last year’s coronavirus relief bill, the director of national intelligence and the secretary of defense are ordered to generate a report on everything the government knows about UAPs, including Dietrich’s sighting. It’s coming next month, and it’s going to be D.C.’s hottest summer read.

And now that UFOs join the pandemic and insurrection on the congressional agenda (when it comes to the “weird year” contest, 2021 is telling 2020 to “hold my beer”), Dietrich’s callers have moved from mostly the fringe, stalker-ish UFO fanatics who just want to be near her to mainstream media freaks. She patiently plays along.

“I do feel a duty and obligation,” Dietrich said, when asked why she agreed to talk to 60 Minutes, her national media debut.

“I was in a taxpayer-funded aircraft, doing my job as a military officer,” she said. “Citizens have questions. It’s not classified. If I can share or help give a reasonable response, I will. I don’t want to be someone who’s saying ‘no comment’.”

Dietrich was a newly winged pilot on a regular training flight with the USS Nimitz Carrier Strike Group that day when something moving fast and erratically came into view. Her boss, Cmdr. Dave Fravor, told her to hang back and be his wingman while he flew closer in to check it out. The object began mirroring his movements, then just disappeared.

“Some days your boss asks to you swab the deck. Some days he asks you to keep high cover while he spars with a UFO,” Dietrich wrote in a tweet.

The video, just one of the recordings from that day, captures a white object shaped like a Tic Tac and the howls and exclamations of the pilots who were tracking its otherworldly motion. The video was released by To The Stars Academy of Arts & Sciences in 2017 but has gained a lot of traction after the Pentagon verified it as authentic. It will be included in that UAP report.

“I’ve never had a Twitter,” Dietrich said, but she created an account this month as a way to step out and connect with the thousands of people obsessed with the event — and her. (Her first tweet was a charming “Radio Check,” a pilot’s version of “is this thing on?”)

“People have found me throughout the years,” she said. “I just was an eyewitness to something in the course of my normal duties ... that somehow makes me a portal.”

As soon as they returned to their aircraft carrier, the pilots reported everything they saw and how it happened.

“We all collectively lost our minds,” she said. “There was no denying it — everybody had heard us on the radio.”

Over beers, during the many reunions she’s had with her commander, they look at each other and shake their heads. “We agree that if we had been solo, we wouldn’t have said anything,” she said.

Naval aviator humor can be brutal. And in the days after the sighting, their colleagues were merciless. They looped alien-invader movies “Men in Black” and “Independence Day” to show on the ship’s channels. They left tinfoil hats all over the place. The daily newsletters had little green men cartoons.

They had to laugh it off, she said, because it was so weird — and because even back at the ship, they saw it, too, on their radar.

Dietrich said she’s decided to be open about it now because she knows other pilots have seen similar UAPs and have kept quiet about them, afraid of the stigma because, let’s be honest, UFOs are still firmly in the realm of conspiracy and kooky.

She’s been low-key about it all these years, answering questions on the Hill and at the Pentagon, listening patiently as debunkers found her private number and screamed at her over the phone.

She’s been teaching at George Washington University and the U.S. Naval Academy, not putting herself in the public eye — “I don’t want to be the faculty UFO freak.”

Plus she’s been busy flying more than 200 combat missions and 57 mounted combat patrols and ground-assault convoy missions over two deployments in Iraq and Afghanistan. The Navy sent her to language school, and she became the strategic architect for the civil-military stability operations team in Ghazni Province, Afghanistan.

She’s been working to promote three causes: her beloved magnet high school, Illinois Math and Science Academy; the foundation to help diversify aviation founded by a former classmate, Legacy Flight Academy; and Wings for Val, the foundation to promote women in aviation dedicated to Valerie Delaney, a Naval pilot from Ellicott City, Md., who died in 2013 during a training mission in Washington state.

And Dietrich is also too busy with her three kids, now ages 2, 4 and 6, to focus much on UFOs.

One of them was the hit of that day’s pre-K show-and-tell. He brought in the “UFO Box” she keeps, the one with the red-and-white helmet she was wearing that day in 2004.

“No, I didn’t have time to think about it too much,” she sighed. “But I will pay someone to abduct me right now.”