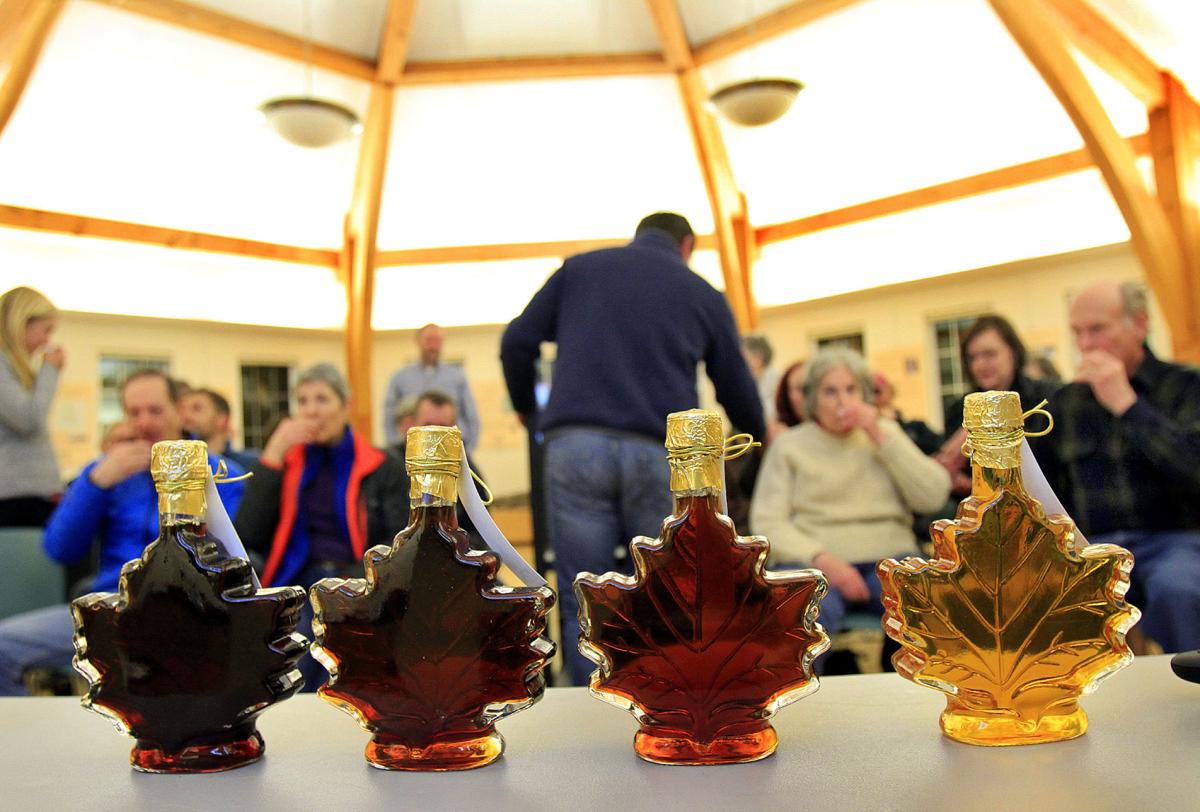 Varieties of maple syrup — from left, very dark, dark, amber and golden — are lined up in maple leaf bottles as Steve

Roberge, Cheshire County Extension forester, passes out samples during “Tasting the Grade: A Guide to Maple Syrup” at

the Harris Center for Conservation Education in Hancock Thursday night. 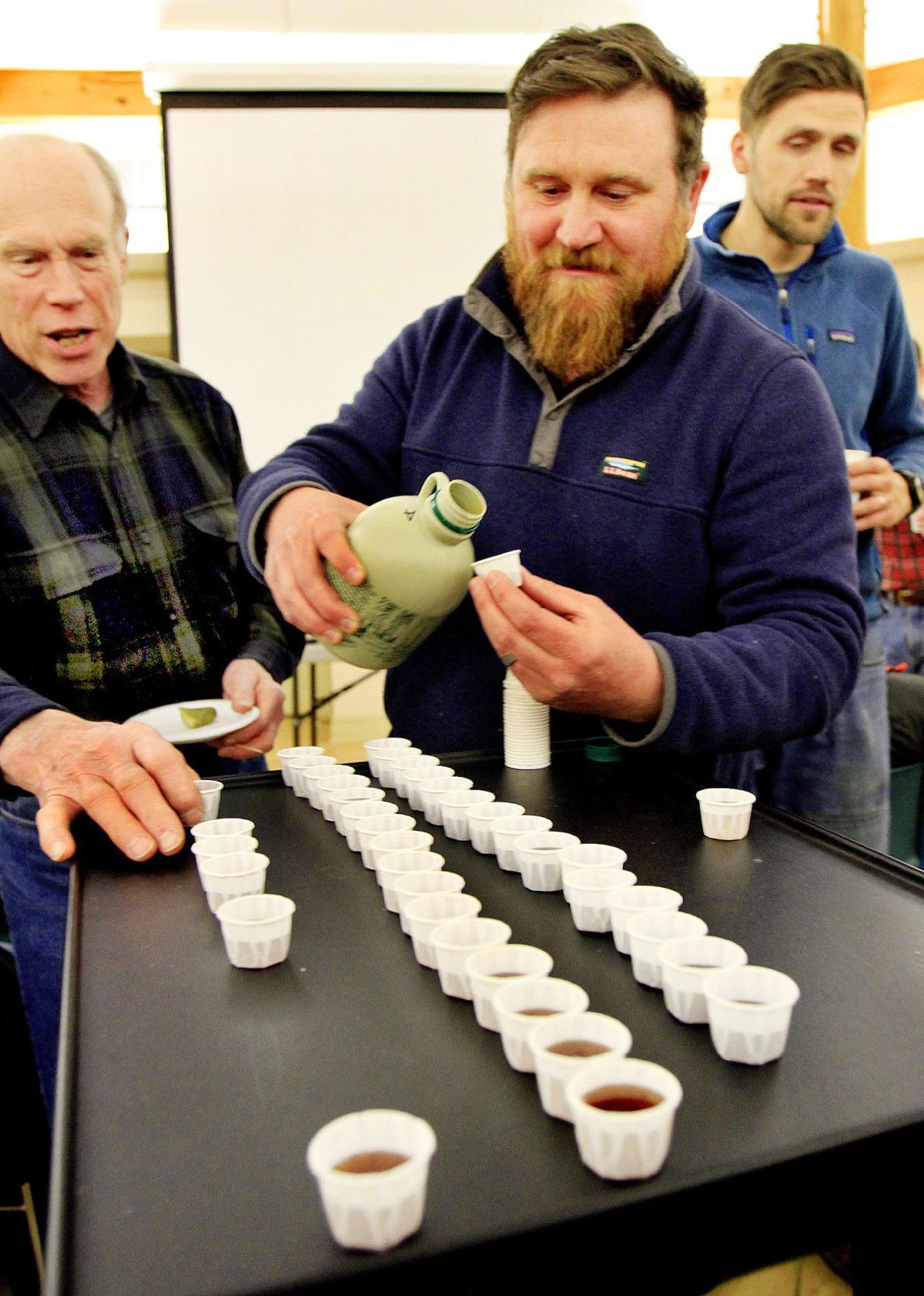 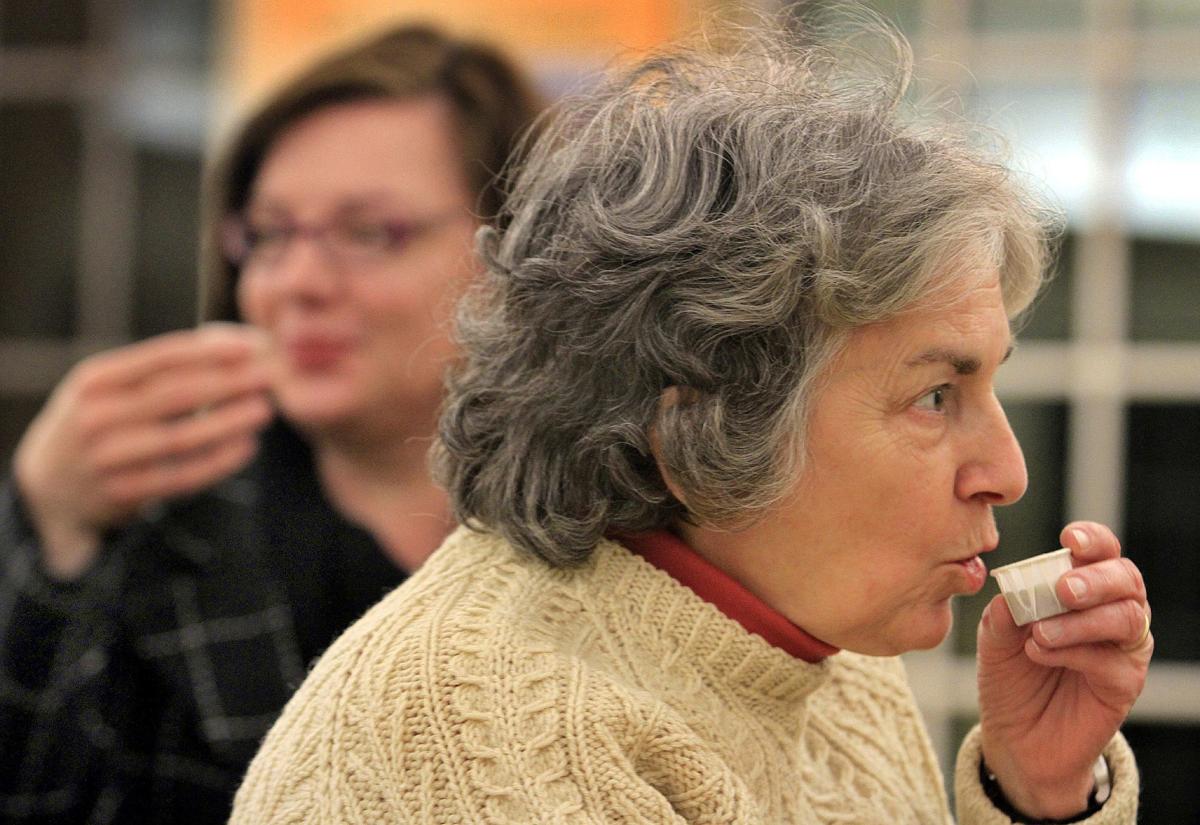 Sara Dowse, right, of Hancock, and Olga Ireland of Jaffrey sip their samples of maple syrup at the Harris Center for Conservation Education in Hancock Thursday night.

Varieties of maple syrup — from left, very dark, dark, amber and golden — are lined up in maple leaf bottles as Steve

Roberge, Cheshire County Extension forester, passes out samples during “Tasting the Grade: A Guide to Maple Syrup” at

the Harris Center for Conservation Education in Hancock Thursday night.

Sara Dowse, right, of Hancock, and Olga Ireland of Jaffrey sip their samples of maple syrup at the Harris Center for Conservation Education in Hancock Thursday night.

HANCOCK — Steve Roberge, our syrup sommelier for the evening, is dressed appropriately: navy-blue woodsman shirt, worn jeans, bushy beard, mud-caked shoes. The latter is an assumption but a good bet since the 20 of us fish-tailed up a mud-rutted dirt road deep in the woods, then schlepped through the muddy parking lot and into the Harris Center for Conservation Education.

In Napa Valley, connoisseurs may daintily sip wine in decorative tasting rooms wearing wrinkle-free slacks and comely collared shirts, but not here. We’re all about mud and maple syrup in early spring, and this is our season, our peak weekend. March is officially Maple Sugaring Month in New Hampshire, and the 24th annual Maple Weekend is being celebrated today and Sunday. It’s when local maple syrup producers, big and small, fire up their sap-boiling kettles and invite the public in for a peek behind the steam.

Thursday night Roberge, Cheshire County Extension forester for the UNH Cooperative Extension, conducted a free maple syrup taste session at the Harris Center. Roberge is an expert on everything maple syrup, from its production to the effects climate change is having on maple trees. A Peterborough resident, he was raised in the White Mountains, serves on a number of outdoor-related committees in New Hampshire and is a competition judge at maple syrup tasting competitions. He knows his golden from his amber.

Roberge was introduced by Eric Masterson, land program coordinator at the Harris Center, who joked, “Just to note, members get more syrup than non-members.” And then he added he was kidding. In fact, it was open bar on maple syrup, with Roberge saying several times that everyone could imbibe as much as they wanted. He brought several jugs of it.

Different varieties of maple syrup were lined up for sampling in tiny paper condiment cups — no fancy glassware, no decanters necessary. But Roberge did provide dill pickles and water, the common ingredients used to cleanse palates of their sweetness in moving from one maple syrup sample to another.

First comes an informative PowerPoint presentation on the history of sugaring in New Hampshire, and its evolution. Roberge explains that maple syrup production actually hit its heyday in the mid-1800s, when massive sugaring camps not only produced maple syrup but blocks of sugar that residents would store in their pantries.

“We actually made more then than we do now,” Roberge says.

The U.S. and Canada were about equal in production. However, whereas production in the U.S. stagnated as manufacturing dominated the 20th century, it increased in Canada. Today, 80 percent of maple syrup comes from Quebec. “They really dictate what happens in the maple world,” he says.

Vermont is by far the leading producer in the U.S., with about 40 percent of all syrup coming from our neighbor. New York is second, followed by Maine, Wisconsin, Ohio, Michigan, Pennsylvania and New Hampshire. “New York has more trees (than Vermont) — if New York wasn’t so lazy, they’d be number one,” Roberge quipped.

The Monadnock Region features many maple syrup producers, with Bascom Maple Farms Inc. in Acworth one of the largest in New England. In business since 1853, it has 90,000 taps and employs about 65 people year-round, and at least 75 in-season. Its CEO, Bruce Bascom, is in the Maple Hall of Fame, elected in 2010. His father, Ken Bascom, was elected in 1994. A few years ago local author Douglas Whynott featured the Bascoms in his book, “The Sugar Season: A Year in the Life of Maple Syrup and One Family’s Quest for the Sweetest Harvest.”

All northern New Englanders probably know making syrup is simple. It takes about 40 gallons of sap boiled down to make one gallon of maple syrup. What you may not know, Roberge says, is that syrup is incredibly complex, consisting of some 300 compounds. “How they all interact, we just don’t know,” he says.

Ask him how Aunt Jemima syrup is made, and he answers it basically comes from a lab. And that’s all he says about that.

But enough talking, let’s get to the tasting. Maple syrup is no longer assessed by grade; rather, it’s divided into four color and taste categories: golden (delicate taste, buttery, a hint of vanilla, no maple flavor), amber (rich, an all-purpose syrup), dark (robust, a pronounced maple flavor) and very dark (very strong). In terms of public tastes, Roberge said, “Dark and very dark today are the prize. … You can’t have a golden with a very strong taste.”

Tasters first let the syrup coat their tongues, then let it roll around their mouths. Roberge says to concentrate on subtle flavor characteristics, and changes in taste. “Different parts of your mouth will pick up different pieces,” he says. He also warns that maple syrup can be easily contaminated, picking up strange tastes if it’s been exposed to outside flavors. In judging competitions, he says, about 20 percent of all entries suffer this fate.

“It’s very cutthroat out there,” he says of maple syrup competitions and the pressure judges are under.

Roberge also touches on the technology of sap collection, particularly in research being done at the University of Vermont. He also presents seminars on the effects of climate change on maple trees, citing some chilling statistics from the Hubbard Brook Experimental Forest ecosystem studies: an average loss of 11 inches of snow cover since the 1950s, three more weeks of bare ground, deeper frosts, wetter soils.

“These things are all climate change models that were predicted, but we’re witnessing these things already,” he says.

Thursday evening ends with Roberge offering up samples of sap he collected earlier in the day. It tastes just a tad sweeter than water. In South Korea, with a climate similar to New Hampshire’s, he said people drink sap straight out of the tree.

Before guests disappear into the darkness, cellphones their only source of light, Roberge makes one last offer you wouldn’t hear in Napa Valley: “If you want to stick around and finish the bottle,” he announces, “you can still drive home safely.”