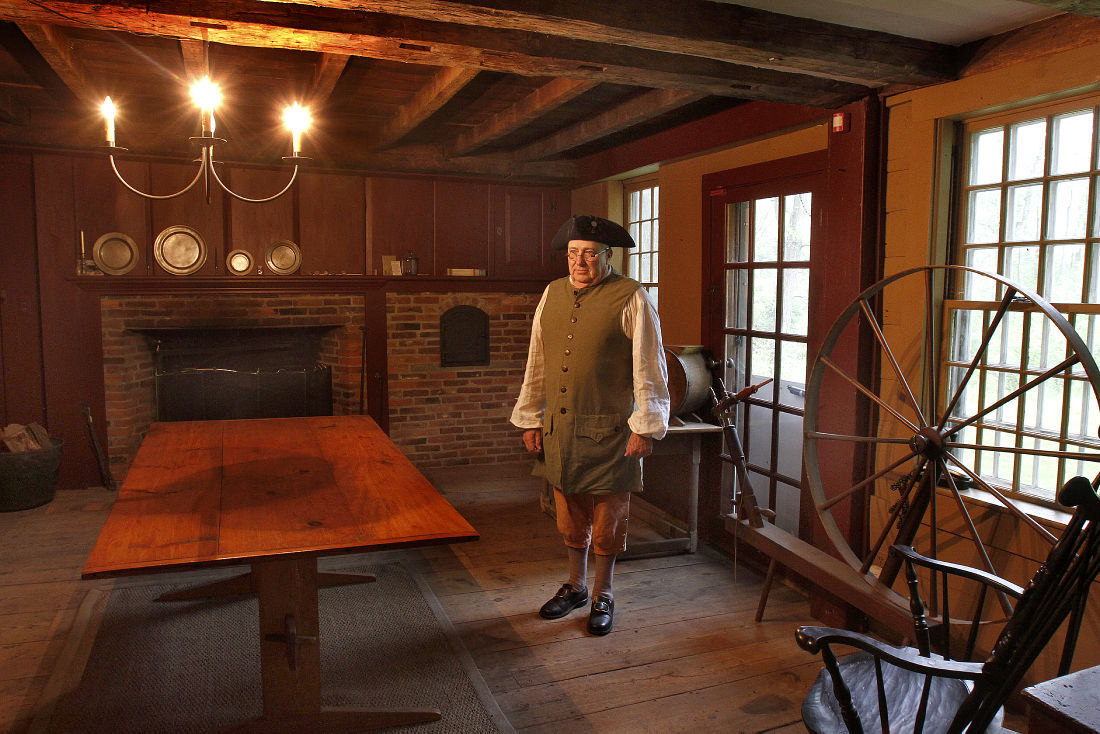 Hinsdale Historical Society member Ralph Desrosiers dons period dress in the kitchen of the Ebenezer Hinsdale House on Route 119, home of the society. 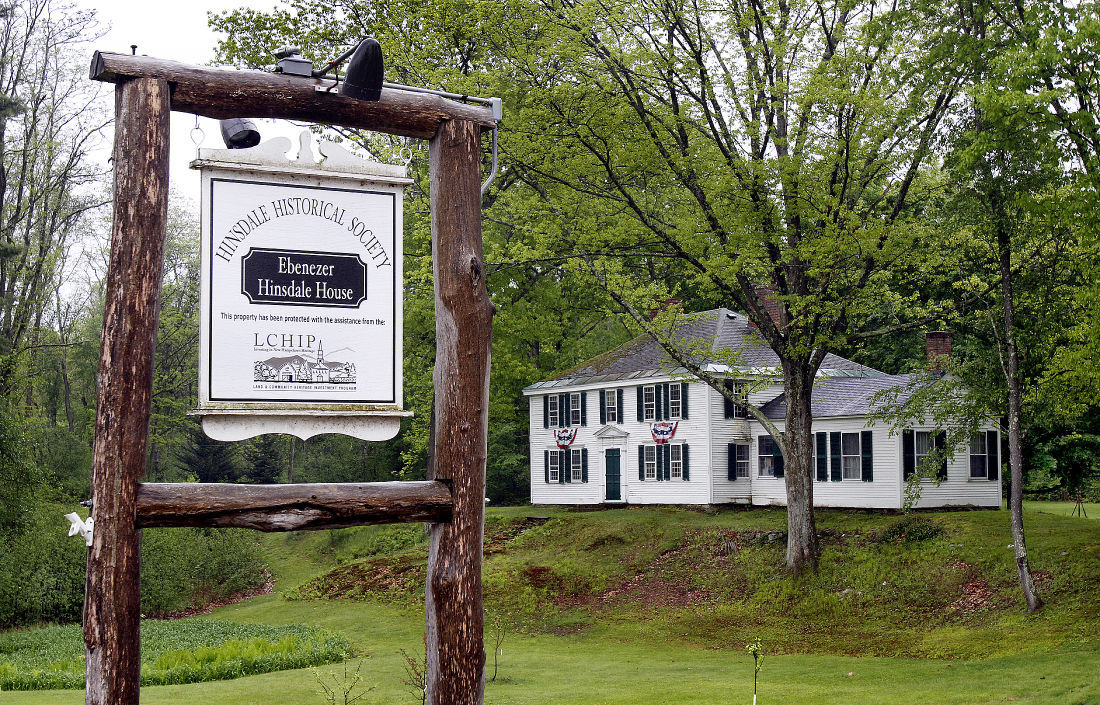 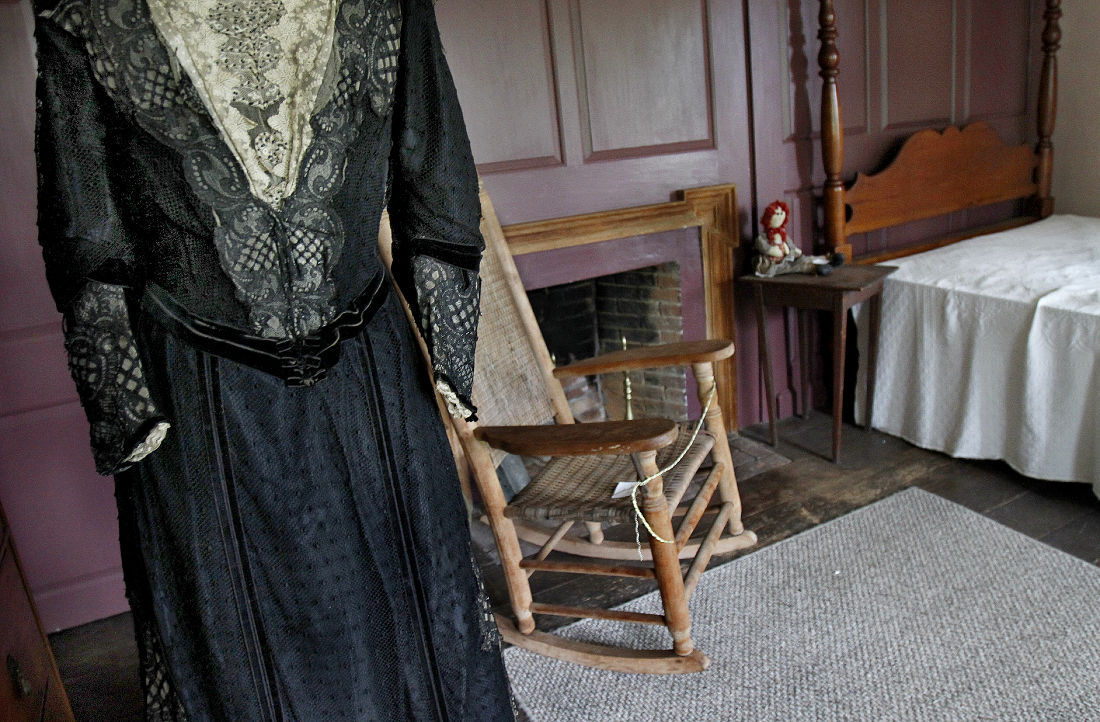 Displayed in the master bedroom of the Ebenezer Hinsdale House, the oldest in the town, is the wedding dress of Martha Crowninshield, married in 1852.

Hinsdale Historical Society member Ralph Desrosiers dons period dress in the kitchen of the Ebenezer Hinsdale House on Route 119, home of the society.

Displayed in the master bedroom of the Ebenezer Hinsdale House, the oldest in the town, is the wedding dress of Martha Crowninshield, married in 1852.

HINSDALE — The small homestead is just up the road from the sprawling Wal-Mart Supercenter, set back from Route 119 and shaded in serenity.

Col. Ebenezer Hinsdale never had to worry about road kill when he built his home six years after the township was chartered in his name. But the threat of Indian raids was ever present. Hence, the original window shutters either fold in or slide shut — not that they expect any stray arrows to come their way.

The dirt driveway leads to a small parking area, where the visitor is welcomed by Allan Boucher, dressed in full Colonial garb. Boucher is one of several Hinsdale Historical Society members who were behind the push to buy the house so its preservation was ensured. Previous stewards had done a fabulous job in augmenting its historical significance.

The aroma of bread baking in the kitchen’s wood-fired beehive oven wafts outside, historical society members having arrived at 5 a.m. to get the fire roaring and the coals red-hot. It can hold 40 pies.

Greenery is popping everywhere on the 40-acre grounds, and songbirds drown out the occasional drone of cars intruding into the Colonial era. The property, once a tobacco farm, totaled more than 400 acres when Col. Hinsdale owned it. The railroad line behind the house was built 100 years later. Today, the tracks are long gone and the railroad bed is for recreational use.

The Hinsdale House, also known as the Liscom Farm, was bought by the historical society for about $450,000 with help from a Land and Community Investment Program grant seven years ago. It had been owned for about 150 years by the Liscom family, then bought on New Year’s Eve 1998 by Don and Linda Parsells who worked tirelessly to restore its original features.

The historical society wants to share the house with the public, a tangible connection to the town’s origins.

“It’s an invaluable part of our history and offers insights into what life was like in that period,” says Ralph Desrosiers, a historical society member who offers guided tours of the house. “The details in it are exceptional.”

The property was developed near the Hinsdell Garrison, known as Fort Hinsdale, which included a trading post and grist mill. Although the home’s specifications were likely drawn up by Ebenezer Hinsdale, he probably never lived in it, wrote Marjorie Whalen Smith wrote in “Historic Houses of Cheshire County.” It was added to the State Register of Historic Places in 2013.

Contractor K. Wesley Cubberley of Site Specific in South Acworth was impressed by the quality of its structure, hypothesizing in 1999 that it was built by farmers or carpenters. “This house was built by professionals,” Cubberley said.

Its post-and-beam timber frame is original, as is much of the plaster, paneling and wide king-pine floors. “The house has great bones,” Desrosiers said.

Historical society members are on-site every Tuesday morning, though usually not in Colonial clothes. And the oven is fired up only occasionally. The grounds have been used for re-enactments, Colonial-era picnics, holiday celebrations, even an Eagle Scout award ceremony. A wedding is planned this summer.

The property includes the two-story main house, three barns and a blacksmith shop. The house contains three bedrooms, servants’ quarters, a formal parlor, an informal parlor also known as the “mourning” room, an office and a music room complete with an acoustically designed high ceiling.

Upgrades have been made to the kitchen and one small bathroom, with town plumbing installed in 1957 to replace its spring-fed cistern. The bathroom includes a curious porcelain fixture — looks like a tub for a baby — that no one’s quite figured out.

In sorting through artifacts in the attic, Linda Parsells discovered a trove of oil paintings of the grounds by Charles Victor Stearns, who was part of the Liscom/Stearns family that owned it from 1830 until 1998. Now many of the paintings hang on the walls.

“They show all kinds of different views of what the property looked like,” Desrosiers said.

It was owned by Dr. Perley and Anna Marsh from 1789 to 1793, significant in that Anna Marsh started the Brattleboro Retreat.

Each room has unique characteristics. The mourning room has double doors at ground level that lead to the outside without having to step down, specifically designed for caskets. Pull-down beds from the walls were available for weary travelers.

The servants’ bedroom had its own staircase leading to the pantry downstairs, so as not to disturb the sleeping residents in the morning.

All rooms have fireplaces except the servants’ and children’s rooms. Instead, Desrosiers holds up a bed warmer — a metal container with a handle shaped like an elongated frying pan. It would be filled with hot coals and placed under the covers shortly before bedtime.

Live string musicians often played in the music room, and Desrosiers estimates the wallpaper can be traced to the 1800s. The 12-over-12 windows — called that because there are 12 glass panes in each sash — were devoid of glass in the Colonial period.

School groups have visited the house this year, and it’s open to the public Tuesdays from 7 to 9 a.m. A caretaker lives on site, taking care of the grounds. The historical society, appropriately enough, holds its quarterly meetings there.

“It’s a link to our past and we’re proud of it,” Boucher said.