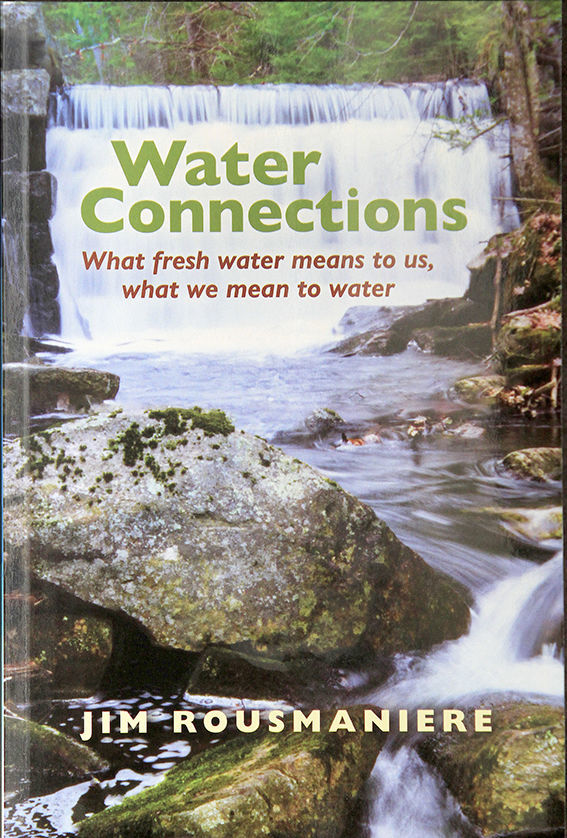 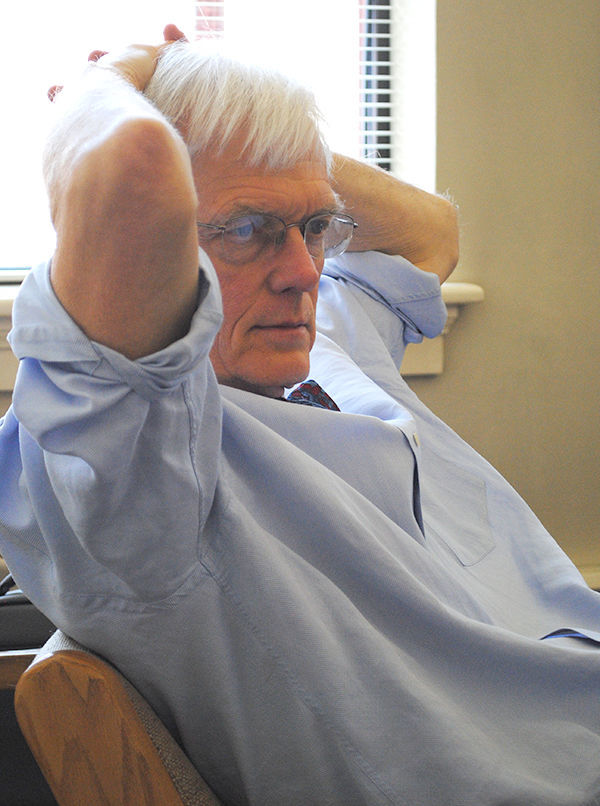 The concept of aspiring artists and authors contemplating their works in the serenity of the woods alongside a brook — babbling or otherwise — may be a bit hackneyed, but it is prevalent.

For first-time book author Jim Rousmaniere of Roxbury, that motif is a catalyst in “Water Connections: What Fresh Water Means to Us, What We Mean to Water.”

The twist here is that instead of acting as inspiration for a book, the brook itself becomes the central subject. Time spent by a brook near his house energized Rousmaniere to explore the interactions of fresh water, nature and humans, exploring how they affect each other. It turned into a six-year project.

The core of his research centers on the Monadnock Region and the Northeast, though it’s not limited to this area. He highlights the connections of water and people through stories and interviews of naturalists, scientists, artists, government regulators, those in the fishing industry and ordinary observers. He cites articles and books compiled by experts. Rousmaniere is the narrator, spreading out the information he has gathered as opposed to what he calls authorial imposition.

He takes readers on journeys to various bodies of water, starting with the 4-mile-long stream that’s a half-mile from his own home. Called Roaring Brook, the inconspicuous stream plays a recurring role in the book, and Rousmaniere serves as escort and guide, pointing out its characteristics, step by step. “I wondered, if water could define the character of a town by helping keep it green, what else could it mean to us?” he writes on the first page of the introduction. “Our connections to water — and our connections among ourselves when we’re around water — are many and complex and occasionally difficult.”

Rousmaniere first dipped his toes in the relationships between water, people and environment decades ago, when he helped design irrigation canals in India as a member of the Peace Corps. He first wrote about Roaring Brook as part of Roxbury’s bicentennial in 2012, a year before he retired after 32 years at The Sentinel, as editor and president. Though the progression of retired editor to author isn’t novel, it wasn’t a direct route.

“It wasn’t on my mind,” Rousmaniere says. “(The bicentennial research) got me thinking about water, but I didn’t, at that point, think I would be taking the matter beyond a short article in a bicentennial booklet.”

Rousmaniere has been involved in numerous endeavors since retiring — selectman, beekeeper, president of the Board of Trustees of the Historical Society of Cheshire County among them. He’s written articles, for The Sentinel and The Boston Globe, including a dive into the socioeconomic consequences of the closing of the Vermont Yankee nuclear power plant in Vernon, Vt. But as he spent quiet time brook-side, the idea for a book took hold.

“I thought about taking it to a deeper level. And the deeper I got into it, the more fascinated I got about water,” Rousmaniere says.

The book features many stories rooted in the Monadnock Region and beyond, including the devastation wrought by Hurricane Irene in Vermont in 2011 and the 2005 Alstead floods. Some stories are humorous and center on Roxbury, such as the time in 1943 when two residents night fishing for hornpout at Babbidge Reservoir think they’ve stumbled upon a plot to poison the water. The story, told to Rousmaniere by now 91-year-old Bill Hooper, who grew up in Roxbury, leads into a broader study of the effects of pollution on waterways. Readers will learn about Tide, “the washday miracle,” laundry detergent packed with phosphates that devastated water bodies before the government stepped in.

Hydropower, the development of reservoirs, aquifers, dams, water rams and climate change are all addressed. So are high-profile examples of failure, such as how pollution inside the pipes devastated the water supply in Flint, Mich., and when the College of Holy Cross had to cancel its 1969 football season because tainted water led to an outbreak of hepatitis A among the players.

And fish. There’s only one chapter on fish, but it’s an “oh, wow” subject for Rousmaniere. Though he is not a fisherman, he is engrossed by the role fish play in nature. He tells of humans trying to restore migrating wild salmon to waters they once knew, only to be frustrated at failing to do so, a struggle that’s been going on for centuries.

“The ‘ah-ha!’ moment came when the waters had been cleaned, dams removed, habitat being restored but the fish were not coming back,” Rousmaniere says.

He discovered a complexity of issues in the ocean — new parasites, fish raised in fish farms being released and mingling with wild salmon, warming waters — all contributed to the lack of success. He discovered that sometimes there was no single fault, no single point of failure, when something goes wrong. And multiple points of failure suggest there cannot be a single fix.

“We determine what’s going to be in water, sometimes not fully thinking through the consequences,” Rousmaniere says. “Change is always occurring and when humans get involved, we speed things up a bit.”

But he balances it by presenting many cases in which humans were successful in restoring polluted waterways. He says it’s a credit to public health standards and somewhat of a miracle that pollution isn’t as destructive as it could be: “Not all unintended consequences are bad,” he says.

Last Saturday, at the official book kickoff, Rousmaniere talked about “Water Connections” with an eager audience of about 20 at the newly opened Bruder House on Main Street in Keene. He has about 15 regional appearances planned so far, including one today at the Toadstool Bookshop in Peterborough at 10:30 a.m.

Bauhan Publishing LLC of Peterborough is the publisher, although, like a meandering brook finding its way to the sea, landing a deal took a while. Rousmaniere is an acclaimed journalist, yet a first-time book author with no name as a writer. With publishing houses in contraction mode, he says he found the process daunting.

The book has had a number of working titles, including “Roaring Brook,” and “Water Stories” lasted a couple years. Ultimately, he favored the relationships implied by “Water Connections.” In Keene, he urged the audience to pull over if they’ve ever been curious about a body of water, spend some time there as an observer.