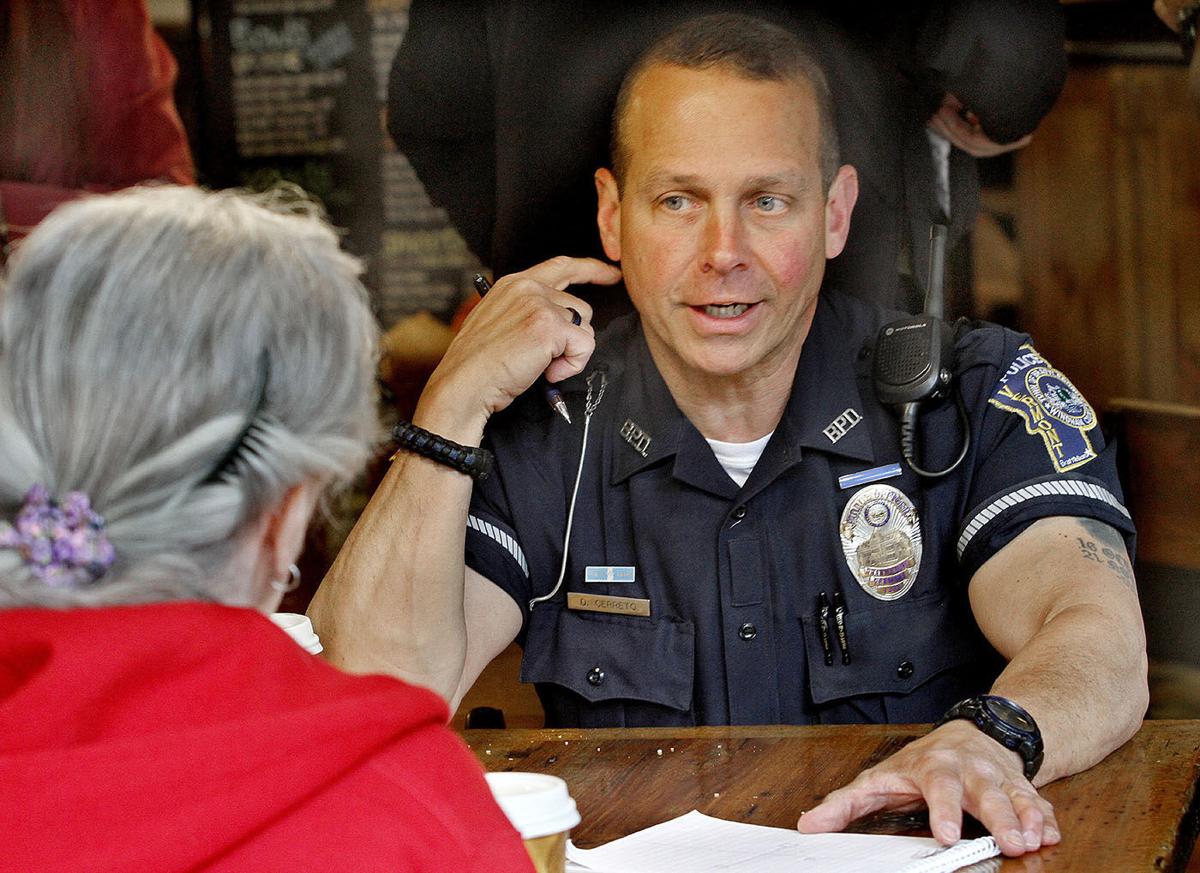 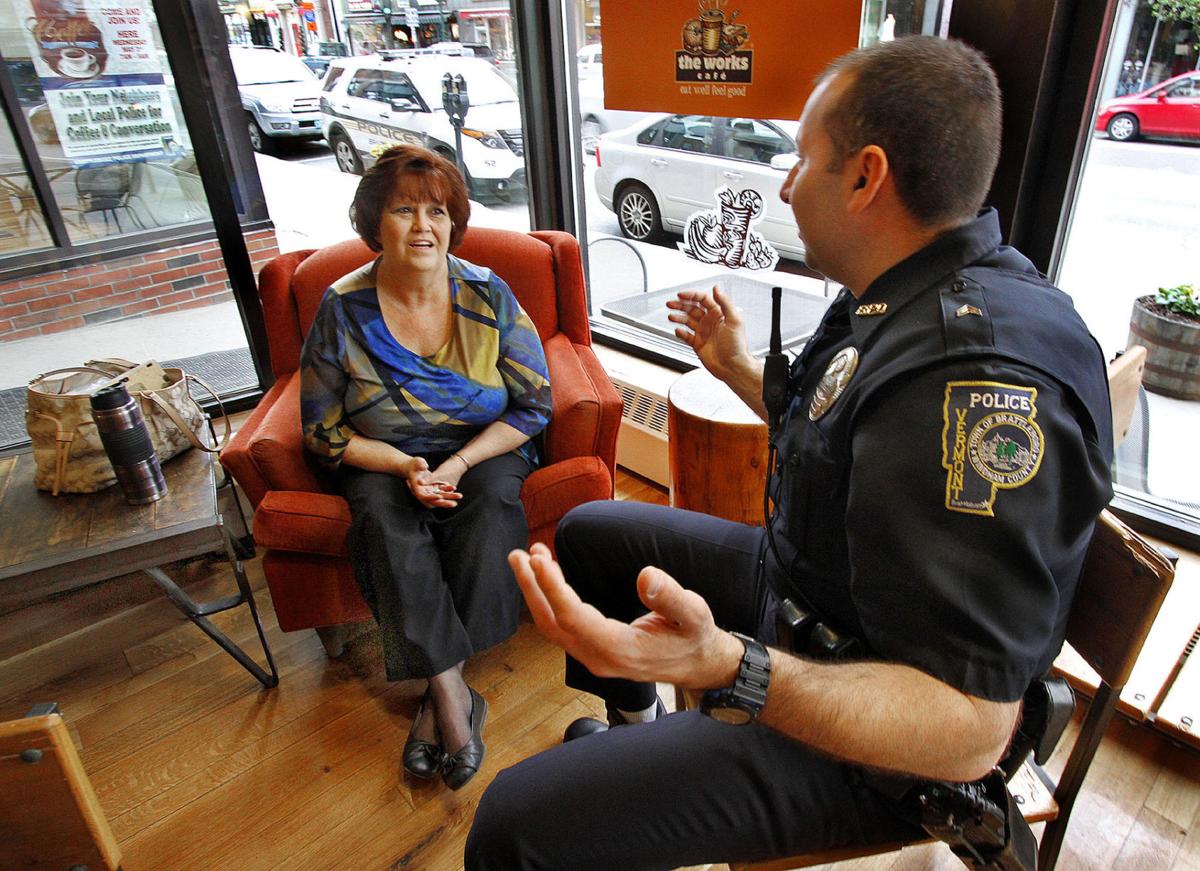 BRATTLEBORO — This time Sharon Couturier arrived with a list. It was her third Coffee with a Cop, and she solicited questions from family, friends and neighbors to take with her to The Works Bakery Café on 118 Main St. in Brattleboro.

So Couturier pulled up a chair opposite Brattleboro police Officer David Cerreto Wednesday morning, and the pair chatted casually for the next half an hour — over coffee, of course. Couturier’s inquiries ranged from highway signage to what’s the proper demeanor her teenage grandsons should show if pulled over.

“I just think this is a great way to have a positive experience with the police department,” Couturier said. “It creates a very positive atmosphere in the community.”

Coffee with a Cop is a 6-year-old national program with a simple concept: Every few months the police pick a local restaurant where they informally interact with customers for a couple of hours over coffee. It was derived from a brainstorming session in Hawthorne, Calif., as police sought to improve communications with residents. It has since spread to all 50 states and more than 2,000 communities.

Brattleboro picked up on it three years ago, when former Police Chief Eugene Wrinn heard about it and asked for volunteers to get it off the ground.

Detective Ryan Washburn and Sgt. Adam Petlock stepped forward and have been on point ever since. They are often joined by other officers and Kristen Neuf, the police liaison and community support specialist from Health Care and Rehabilitation Services of Southeastern Vermont.

On Wednesday, Washburn and Petlock arrived at The Works before 7 a.m. and spent the next two hours engaged in conversations. They moved casually from table to table, sometimes introducing themselves — “Hi, my name is Ryan” — and other times the center of a larger group. Several on-duty officers streamed in and out, eager to jump into conversations. At one point, six officers were in the restaurant.

Washburn chuckles and says they’ve settled into a confident routine in the three years they’ve been doing it. But they weren’t so sure of themselves at their Coffee with a Cop debut May 14, 2014, at Bruegger’s Bagels.

“We were very nervous,” Washburn said. “Not many people came in. I think we had more media there than people. But once we started doing it, word got out, and we’ve had some really good discussions.”

Some topics come up at almost every session, such as the flow of drugs that rides up Interstate 91 and into the town of about 11,700. A recent concern was panhandlers following people to their cars.

“It opens doors to other issues we didn’t know about, like people speeding on some streets you wouldn’t think,” Washburn said. “We sent a couple of officers there and, sure enough, they wrote a couple of speeding tickets.”

A native of nearby Dummerston, Vt., Washburn is a military veteran, former patrol officer and diehard Red Sox fan. None of the Coffee with a Cop sessions have led to tips on crimes he’s investigating, but he hopes that happens down the line. It’s not exactly like NCIS, where crimes are solved in an hour, he’ll explain to residents.

A handful of Coffee with a Cop sessions around the country have devolved into heated confrontations between police and residents. That hasn’t happened in Brattleboro, though Washburn says he was heckled once and they talked it out over a cup of coffee.

“I think the worst was with a Yankees fan,” Washburn said with a grin. “We sat there for a good half hour going at it.”

They’re still experimenting with different locations, as Coffee with a Cop deliberately rotates around area restaurants. The downtown coffee shops work well, though they’ve also tried McDonald’s and Cumberland Farms on Putney Road. Cumby’s was a particular challenge: “That was a little tough. People wanted to get in, buy their stuff and get out,” he said.

Whereas Washburn is dressed in a shirt and tie, Petlock and the other officers are in uniform.

“It gives us the opportunity to find out what the pulse of the town is,” Petlock said. “We have a better idea of what people’s concerns are, what’s going well, what’s not. We really get a lot of information from people. … You learn things that you just weren’t aware of; you get to talk to people you otherwise wouldn’t talk to.”

Petlock says they write down concerns people have, then review them with Police Chief Michael Fitzgerald after the session and decide if there’s any action they can take. Sometimes, they’ll follow up with a phone call to a resident.

Neuf, the police liaison, is a regular at Coffee with a Cop. She often rides with the officers to calls, especially domestic situations, that may benefit from having a social work specialist on site. “My desk and my life and my brain are imbedded with the police department,” she said.

It has given her an appreciation for the challenges police face, having learned to defer to their knowledge and protocol when it comes to safety. The police, in turn, understand she is a valuable resource at some calls. They have developed a trust in each other, and she finds Coffee with a Cop gives the public a glimpse of what she sees every day.

While Coffee with a Cop isn’t in southwestern New Hampshire, Manchester and Concord have programs, along with a handful of towns in other parts of the state. “I think Keene should do all they can to get this program,” Couturier said after having her questions answered.

She even got a free Brattleboro Police Department coffee mug, having met a standard that isn’t too rigid. “To get a mug, you have to sit down and have a good conversation,” Washburn said.

Petlock, meanwhile, tested his artistic skills Wednesday while visiting with a mother and her young children. “How many times do you get to hang out with kids and draw pictures of Mickey Mouse?” he asked.