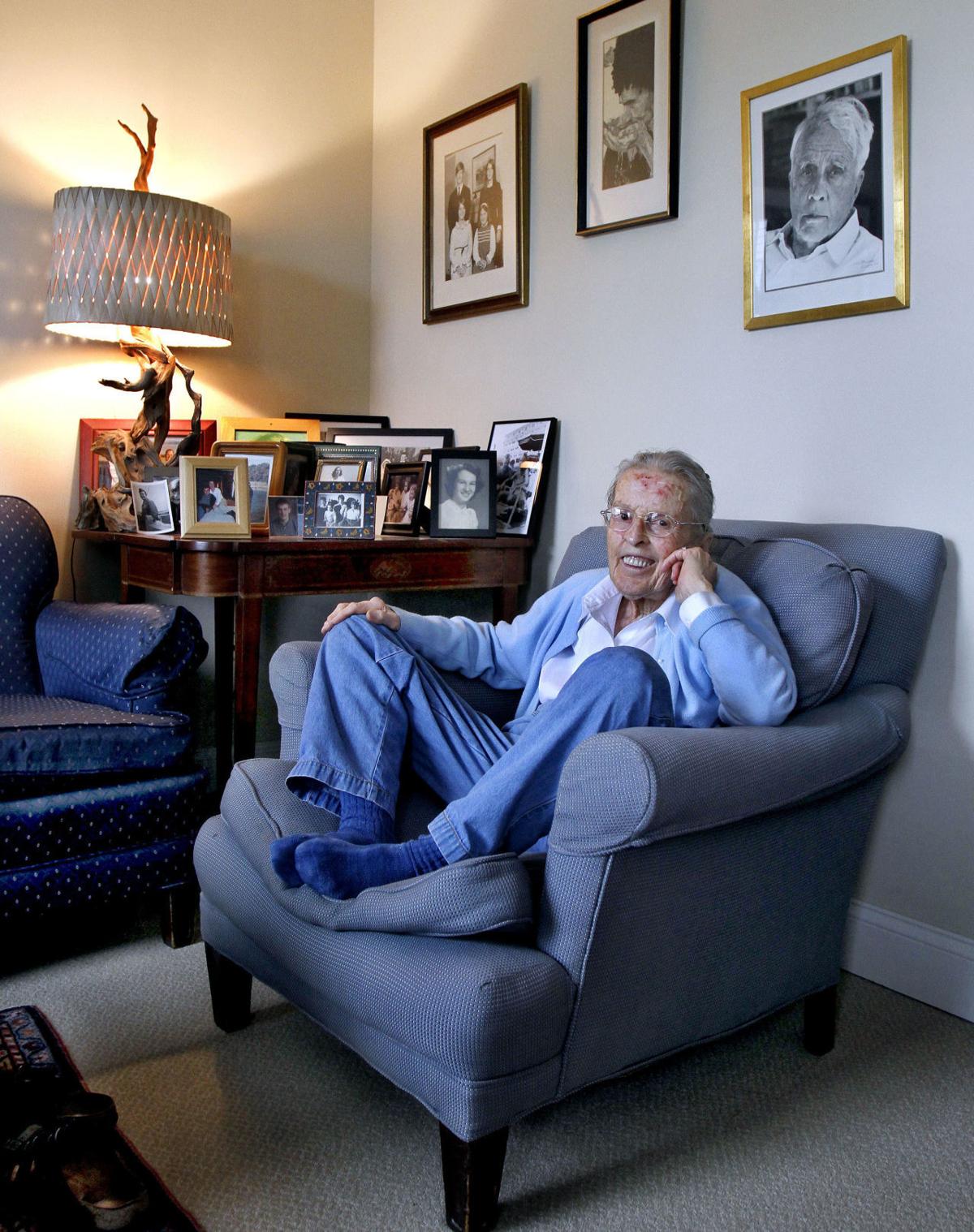 Barbara Hull Richardson in her apartment at Bentley Commons — now called American House — in Keene in 2014. 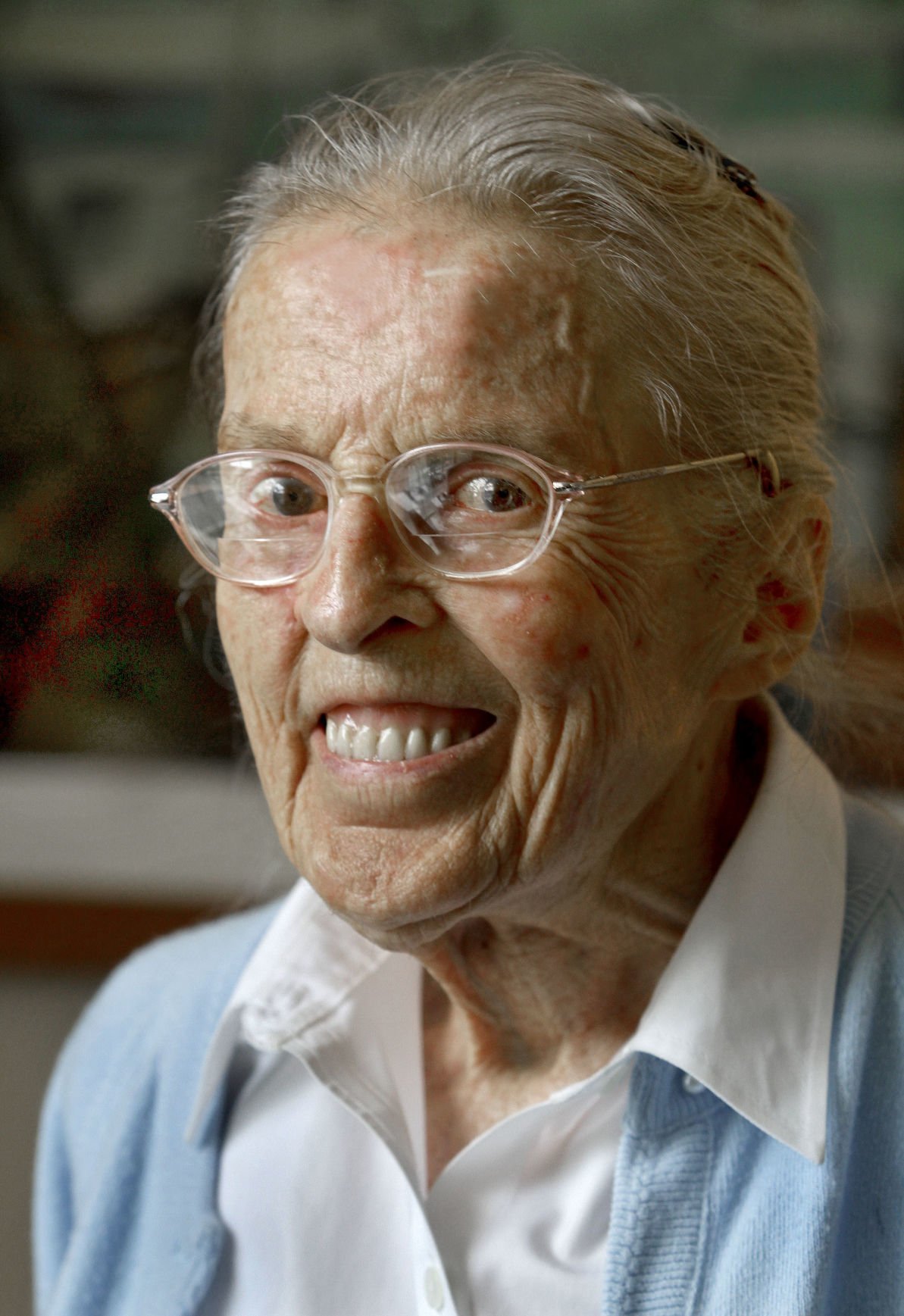 Barbara Hull Richardson, as photographed in 2014. 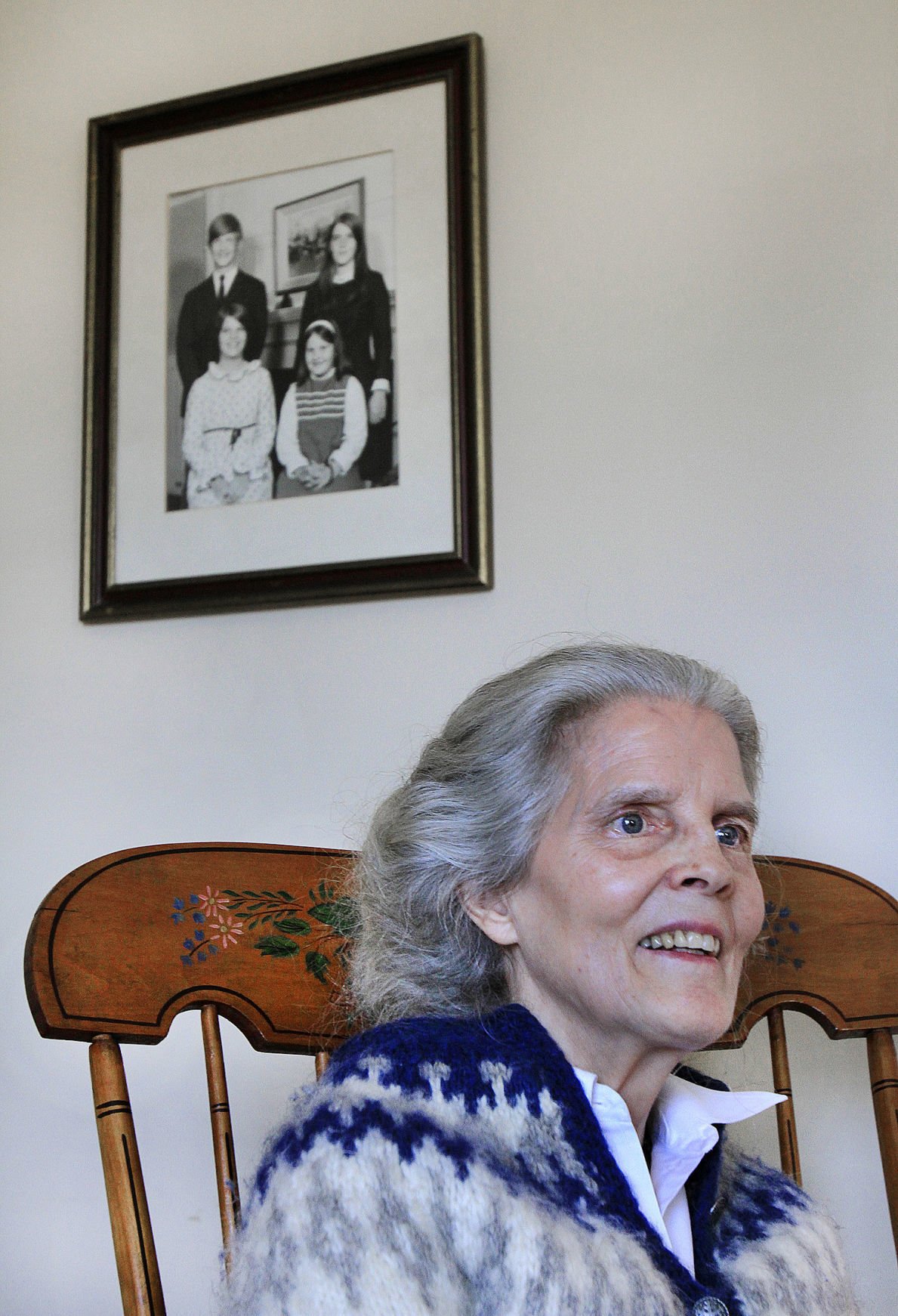 Chris Richardson, daughter of the late Barbara Hull Richardson, speaks about her upbringing during an

interview at her mother’s apartment at American House (formerly called Bentley Commons) in Keene Wednesday. A portrait of Chris and her siblings is on the wall behind her. The same portrait is seen in this photo of Barbara, taken in 2014, when she was honored in The Sentinel’s Extraordinary Women magazine.

Barbara Hull Richardson in her apartment at Bentley Commons — now called American House — in Keene in 2014.

Barbara Hull Richardson, as photographed in 2014.

Chris Richardson, daughter of the late Barbara Hull Richardson, speaks about her upbringing during an

interview at her mother’s apartment at American House (formerly called Bentley Commons) in Keene Wednesday. A portrait of Chris and her siblings is on the wall behind her. The same portrait is seen in this photo of Barbara, taken in 2014, when she was honored in The Sentinel’s Extraordinary Women magazine.

Seated in a wooden chair, Chris Richardson is surrounded by stacks of divergent books, bins filled with journals, articles and letters, written keepsakes scattered from one corner to another in the small apartment at American House on Water Street in Keene. A few photos remain on the walls, but many have been taken down, part of the painful metamorphosis family members endure following the passing of a loved one.

This is where Barbara Hull Richardson, a noted local activist and pacifist, lived the final years of her life. It’s where she died last Saturday at age 96, surrounded by family and friends. Chris Richardson, 66, her daughter born third among four siblings, spent the last few weeks in this apartment with her mother, sometimes sleeping in a chair, sometimes on the couch, sometimes on the floor. Don’t wince, it’s perfectly natural for her.

“(She had) one foot in the spiritual realm and one foot here, so she tried to tell me what was going on,” Chris says of those final weeks and days spent with her mother.

Much has been written about Barbara Hull Richardson, from her early years as a Hut Girl at Pinkham Notch — marked by her intimacy and accord with the White Mountains — to the nine terms she served as a state representative in Concord. Service to others was a common thread in all her endeavors, career and volunteer. Skimming through the decades, she was behind the first Head Start program in Keene; a welfare caseworker in the 1960s; a child services programmer working to find homes for children who needed adopting in the ’70s and ’80s; a public education advocate in the ’90s and beyond; and a fierce backer of same-sex couples’ rights and Doris “Granny D” Haddock’s campaign finance crusade in the 21st century. She was always fighting for the underdog.

Make no mistake, Chris Richardson is her mother’s daughter, right down to their diminutive heights and enamoring smiles.

If Barbara Hull Richardson was a free spirit, Chris Richardson is a freer spirit, born into the hippie generation of the 1960s and having never outgrown it. Today, she lives off the grid in White River Junction, Vt., yet when her mother fell and broke her hip in the apartment a few weeks ago — the trauma that led to her failing health — Chris came down for a day and stayed for weeks.

They were always close, she says, but in that time they talked intimately about life, and openly about Richardson’s impending death. Her mother did not fear dying; rather, she was ready for it.

“Until the last days of her life, I never realized just how brilliant she was,” Chris says.

Memories of her mother sweep Chris back into her own childhood, recollections of playing outside, carefree, with her siblings and 14 cousins. “I was so happy to be alive,” Chris says. “(My mother) cared about life being fun, and she helped make it fun for us in so many ways. … She would always meet me at my level. She always had stories about people.”

The Richardson household wasn’t exactly Ozzie and Harriet. It’s doubtful that the staid TV couple would have welcomed Barney and Betty Hill to their dinner table, and a host of exchange students and visitors from around the world. But Elmer and Barbara Hull Richardson did. The Hills famously claimed they were abducted by extraterrestrials in 1961, an account adapted into a best-selling book and TV movie.

“We heard the whole story at dinner,” Chris says.

People from around the world lived with them. Chris remembers being taught the tree pose by a visitor from Ghana, a basic yoga movement that centers on balance, which she still practices today. “The kids would have free rein, space just for kids, and the parents would never come there. We were free to be ourselves, but we also had structure and guidance,” Chris says.

The family moved several times when Chris was growing up, a trait ((Paul: Is that a trait, per se?)) she never shed. She tried secondary school, attending Marlboro College in Vermont for a while, but decided she’d rather live life than read about it in a classroom. Some lessons weren’t easy. Working with challenged boys in Wisconsin ended badly, but the entire experience enhanced her spirituality. She came home humbled and slept for two days straight. “I just remember being in a tunnel and coming out of it,” she says.

She wanted children of her own and in 1972 married an old childhood friend. They separated when the kids were 1, 3 and 5, an upheaval that affected her immediate and extended family. Today, Jehshua, 45, Maya, 43, and Nissa, 41, have careers in and around the Upper Valley.

A single mom, Chris lived the hippie life though she says she never indulged in drugs any stronger than marijuana. “I was a hippie. We were all hippies,” she says.

Dwellings included a cabin in Fitzwilliam with a propane tank outside, two burners and a piano that filled the room with amazing music. She tried unsuccessfully to trade her ’60s Volkswagen bus for a horse and buggy, then drove cross-country to Goleda, Calif., just north of Los Angeles, kids in tow. They lived in a commune. She got thrown out by its leader. They lived in a tepee, building beds on stilts off the ground. Her ex-husband joined them at times. They became stranded driving through the Ozarks. Finally, Chris says, her mother put her foot down and said it was time to come home.

“I really had to make my way by myself once I was here,” she says. “But I made it all work thanks to my mother — she gave me all the support I needed to make it work.”

Her career evolved, taking various directions, including driving a school bus and serving as a director of a daycare center in the 1990s once she settled in the Upper Valley in Vermont. She went back to school, did administrative work at Dartmouth Medical School, heeded the call of her hippie roots.

“I went from that to working in a garden one summer. I needed it. It was so much fun to go from that to digging in the dirt and getting exhausted,” Chris says.

She worked on a movie set, “My Mother’s Early Lovers,” shot in Vermont in 1998. She became part of the League of N.H. Craftsmen before retiring. “My resume is pretty scrambled because it is so different,” she says.

Barbara Hull Richardson fell from a chair one morning recently, shortly after aides had made her bed. She never really recovered from surgery, Chris says, though her mother never lost her verve. When doctors, nurses and aides rotated through her hospital room asking the same questions, Barbara would answer, “Write it down on paper,” as if they were the forgetful ones.

Barbara was delighted that well-wishers circulated through the apartment, where she spent her last eight days after leaving the hospital. She repeatedly said, “I’m ready to go,” Chris says. Three times she pronounced herself almost gone, only to rebound before the end came one week ago. She knew it was time.