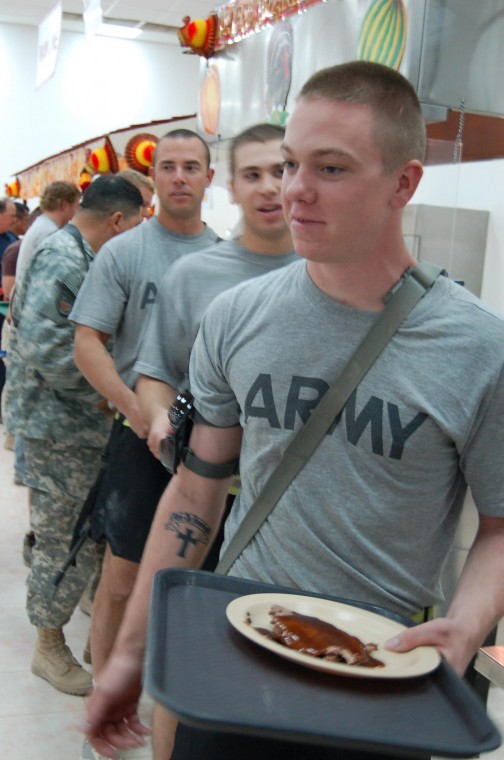 Pfc. Bow Green of Warren (front), Pfc. Reginald Hastings of South Wheelock, Vt., and Spc. Matthew Smyrski of Ira, Vt., all soldiers in the 220th Transportation Company, wait in line for Thanksgiving dinner at the Contingency Operating Base Speicher dining hall Thursday. At left, a table with a bountiful arrangement of fresh fruit. 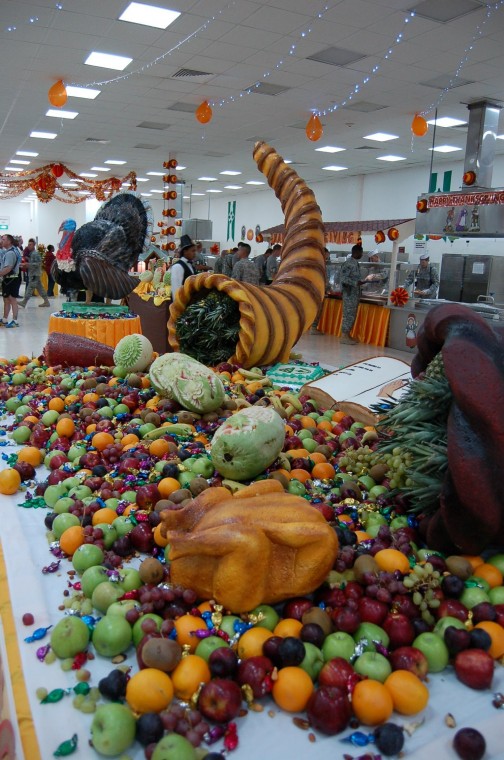 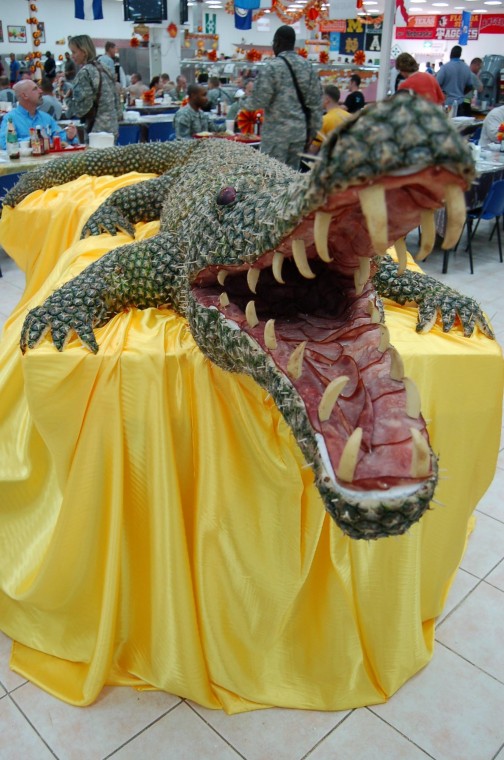 An alligator made of pineapple, ham and french fry-teeth, was among the displays scattered throughout the dining hall Thursday.
1 of 3

Pfc. Bow Green of Warren (front), Pfc. Reginald Hastings of South Wheelock, Vt., and Spc. Matthew Smyrski of Ira, Vt., all soldiers in the 220th Transportation Company, wait in line for Thanksgiving dinner at the Contingency Operating Base Speicher dining hall Thursday. At left, a table with a bountiful arrangement of fresh fruit.

An alligator made of pineapple, ham and french fry-teeth, was among the displays scattered throughout the dining hall Thursday.

CONTINGENCY OPERATING BASE SPEICHER — This was Sgt. Steven Rhodes’ second Thanksgiving in Iraq. His first was in 2002, and the New York City native missed the main meal.

Back then, Rhodes was working late when the turkey dinner was being served in the dining hall.

“We ended up going to midnight chow and had hot dogs and hamburgers for Thanksgiving dinner,” he said, laughing.

This year, as a member of the Keene-based 220th Transportation Company, he made sure to get in on the meal served Thursday afternoon in the dining facility with a handful of other members of the Army Reserve unit.

“I don’t mind it,” he said of spending the holiday far from home. “These guys are the second part of my family.”

Servers behind long rows of stainless steel bins dished out hearty portions of turkey and fluffy mashed potatoes. At a station in the center, a server wearing a paper pilgrim hat sliced off juicy pieces of prime rib.

Soldiers also piled their plates high with sweet potatoes, vegetables, cranberry sauce and several kinds of pies, including pumpkin and pecan, and cake.

Long lines stretched out both entrances of the dining hall for most of the afternoon as a steady stream of soldiers and civilian contractors stood outside chatting in the sunny, 75-degree weather.

Inside, soldiers ate at a long table topped with turkey centerpieces.

With no supply convoy missions heading out, Thursday was a day off for most of the soldiers in the 220th.

Some, including Spc. Geoffrey Boffitto of Concord, participated in an early morning 5-kilometer “turkey trot” race on the base. Boffitto is training with two other soldiers for a marathon next spring.

Other soldiers took advantage of the time off to sleep late and spend time together.

Spc. Peter Hatch of Barre, Vt., and Spc. Tim Foley of Brookline enjoyed late-morning coffee on a deck they built to cover the sand and gravel path in front of the housing unit they share.

“We’ve got Dunkin’ Donuts coffee that we both get sent from home,” Foley said. “I’ve got the Patriots mug and he’s got the Army mug, so we’re all set.”

Soldiers in the unit live two or three to a room and are clustered in the containerized housing units, or CHUs, by platoon.

A few doors down, Staff Sgt. Larry Martz of Hagerstown, Md., and Sgt. Daniel Rosko of Pittsburgh, Pa., were getting ready to meet the rest of the unit’s maintenance platoon for Thanksgiving dinner at the dining hall.

Adorning the front deck of their house are two well-weathered inflatable pink flamingos, an inflatable palm tree and a string of parrot-shaped lights hanging from the net stretched overhead — decorations they purchased online shortly after arriving in Iraq.

During the summer and early fall, they hosted several cookouts there and held domino and poker tournaments, Martz said.

“We had this nice deck,” he said. “So we thought we needed something to make the place feel a little more like home.

“We tried to keep it all clean, but every time we’d wash it another sandstorm would come through overnight.”

Later that afternoon, Sgt. Robert Makarski of Somerville, Mass., and Sgt. Justin Morales of Latham, N.Y., headed out to the desert near the housing units for a Thanksgiving golf tournament.

Armed with nine-irons and golf balls sent from a Massachusetts-based organization called Local Heroes, they whacked balls across the desert until dusk, cracking jokes about working on their sand trap game.

For many of the soldiers, the holiday led to thoughts of home and they made phone calls or e-mailed family members in the U.S.

And while there were no parades, football games or family feasts at the small base in northern Iraq, many of the soldiers said they felt thankful that they were able to share the day with one another.

“At least we’re spending it together.”

For more than a year, The Sentinel followed this Army Reserve unit’s march to a year-long deployment and chronicled the journey.