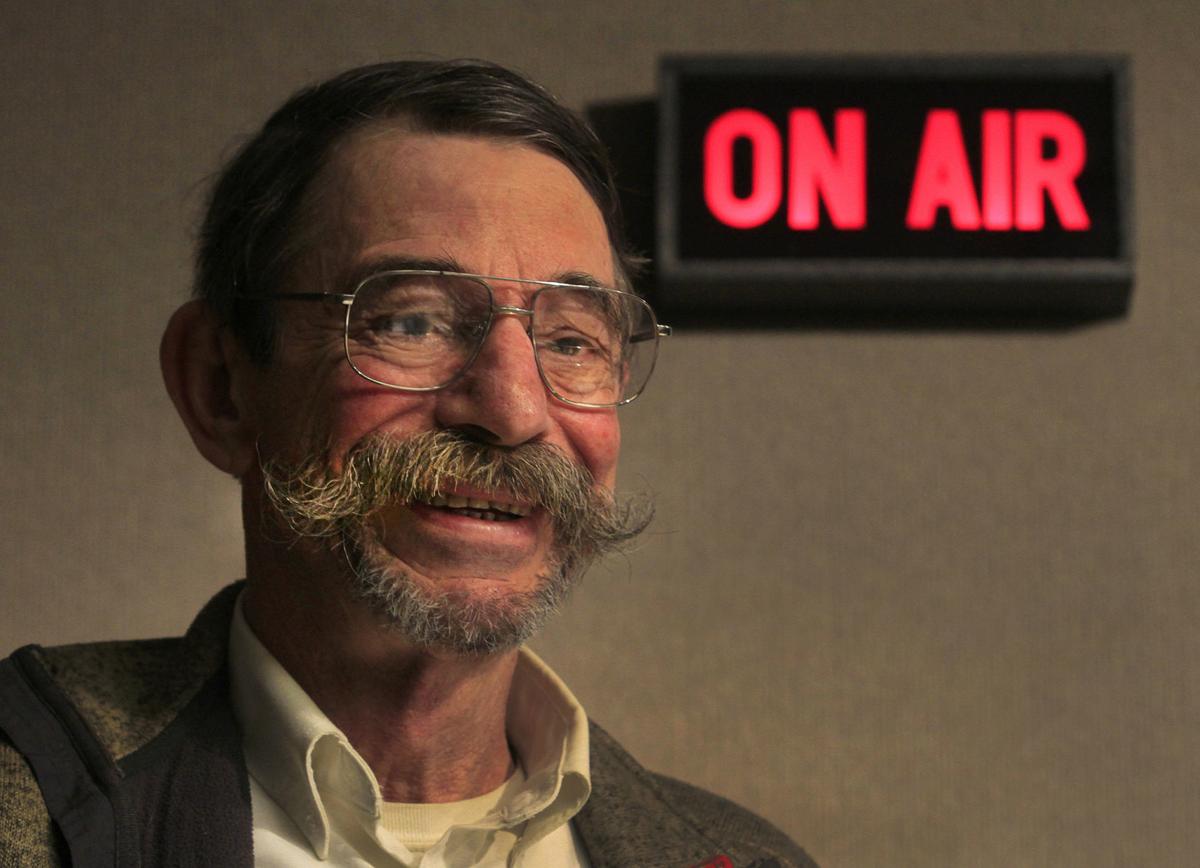 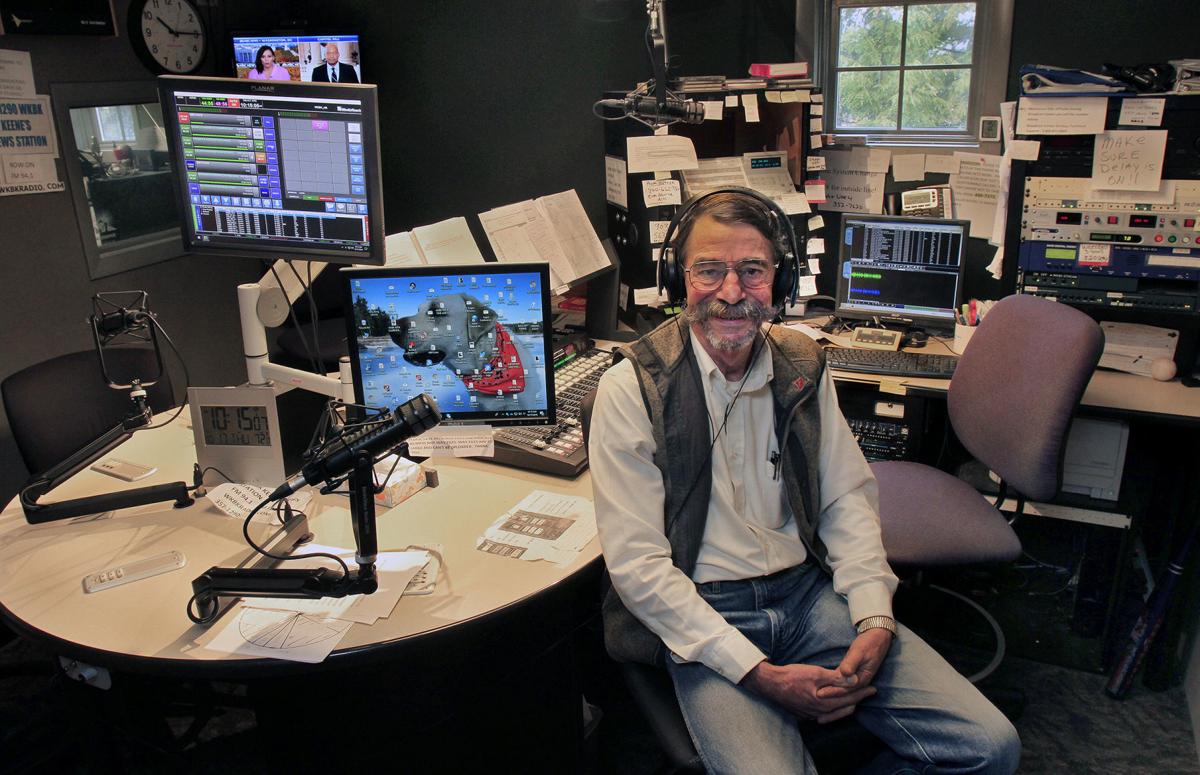 John DiBernardo of Keene in the WKBK studio where he’s had a radio show for the past several years. DiBernardo plans to retire after he finishes his last show on Oct. 27.

John DiBernardo of Keene in the WKBK studio where he’s had a radio show for the past several years. DiBernardo plans to retire after he finishes his last show on Oct. 27.

John DiBernardo sits at the kitchen table of his home in Keene, sipping strong black coffee he’s just brewed and trying to find the precise word to describe his voice.

“Rich? Deep? Resonant?” he asks himself, his focused eyes indicating that he’s rummaging through the vast vocabulary warehouse in his brain.

He’s hit the bullseye; “sonorous” means a tone of marked deepness and body. Plucking out the perfect word is an unerring talent he possesses as he easily slides into his role as Keene’s raconteur, well known for not only his voice, but also his ubiquitous fedora and massive walrus mustache.

“My voice is a gift from God,” he admits, in the typically expansive way he has of talking, “and I love language.”

The slender DiBernardo, who has lived on the same street in Keene for 66 of his 68 years, is a city treasure, a cornucopia of knowledge, a one-man compendium of words, history and insightful, provocative opinions.

Although he’s held several jobs in town during his life, most residents would recognize his name — and voice — from the eponymous John DiBernardo Show on Saturday and Sunday mornings on WKBK AM/FM radio in Keene. After four years, he’ll finish his last show on Oct. 27 and turn off the microphone.

“We are all going to miss John’s deep and soothing voice weekend mornings …” wrote Dan Mitchell, WKBK’s brand manager, in an email. “John is incredibly knowledgeable and his roots here in the Keene area run very deep.”

So why is he calling it quits? Well, he wants to finally describe himself as fully retired, and he’s grown weary of having to awaken at 2 a.m. on Saturdays and Sundays and prepare for his talk show, which begins at 5 a.m.

“I’ve worked hard to be old,” he says, another bon mot that listeners might recognize. “I’ll be able to sleep later in the morning. You know, the older I get, the longer it takes to do things.”

“I was at Al’s wake, and Mason came up to me and asked if I’d be interested in being on the radio,” he says, referring to Mason Washer, who has his own show on sister station WKNE-FM. “I’d been a regular caller anyway, so I had a following, I was a known quantity.” Both stations are owned by Monadnock Broadcasting Group.

Then Mitchell contacted him and asked if he’d like to take over from Kulas.

“I said, ‘Absolutely!’ I would have been a fool not to take that opportunity.”

He understudied briefly with then WKBK broadcaster Jared Goodell, and then faced the microphone alone.

“I was nervous; actually, I was absolutely petrified,” he says.

“I had a lot of klunkers in the beginning, but I grew more comfortable with it. Still, when that ‘On Air’ light goes on, there’s a moment of nervousness.”

Preparing for the show is a significant amount of work, he says, an alchemy that includes carefully reading The Sentinel, monitoring the web and listening to residents he bumps into during the week. From this stack of information, placed in an overstuffed folder — newspaper clippings, notes, printouts of stories in other media — comes the raw material for the talk show.

“I have a lot of footnotes in my head, and that can get me through the time when no one is calling in,” he says.

Although he has generally either a conservative or libertarian slant on political subjects, his polite manner with callers is a hallmark of the show.

He is also a stickler for correct grammar and proper word usage and sentence structure, as well as clearly articulated statements.

“Language is the only method of conveying our thoughts to other people, so wouldn’t you want it to be as concise as possible?

“English is a very precise language. For example, in Italian there is only one word — ‘grande’ — to describe something as big. In English, there are so many words to describe big — huge, gigantic, gargantuan, massive, vast.”

He also objects to language that obfuscates rather than clarifies.

His love of language and his thirst for knowledge come from his upbringing in Keene, and from his parents, the late Angelo and Elinor Walsh DiBernardo, who raised seven children in the house across the street from where he lives now.

“My world has always been just this street,” he says, but his mind roams around the world.

“I got my first library card when I was 5 years old,” he says, and he recalls poring over the set of Encyclopedia Britannica that his parents had purchased on an installment plan.

“It was my upbringing of reading; we’d fight over the Reader’s Digest and Look magazine. I still read three to four hours a day.”

Displaying his adroitness with words and a sharp sense of history, he colorfully describes the neighborhood where he was raised.

“Over at Hickey-Desilets Park, we played baseball and football, learned to smoke, hang out, learned about the birds and the bees. You know, that park is named for two Keene boys killed on the same day in World War I. It was dedicated on Veterans Day in 1939, and little did anyone there that day realize we’d be in another world war very soon.” (Cpl. Leo Desilets and Pvt. Frederick Hickey were killed in the Battle of Chateau-Thierry in France on July 18, 1918, and both are buried in St. Joseph Cemetery in Keene.)

However, DiBernardo says growing up in the neighborhood wasn’t always Norman-Rockwell idyllic, as he recalls suffering from the slings of bullies. “I was small, that was part of it, but I didn’t throw in with the other guys who did the bullying, and there were a couple of guys who beat me up. Sometimes I walked home backwards with a stick in my hand.”

From a Latin class he took at Keene High School, DiBernardo developed his love of language and linguistics. However, he dropped out of school in his junior year, a mistake sparked by a rebellious streak he now recognizes as having morphed into a lifelong tendency to be a free-thinker who goes his own way and embraces independence.

“I didn’t like the form or structure of school; I didn’t fit in.”

By that point, too, DiBernardo says that his parents were older and didn’t dissuade him from his hasty and unwise decision. “My parents were tired; I was the fifth of seven, and by then, they were worn out. You know how it is, the oldest kid gets piano lessons; the youngest one gets a harmonica.”

He went to work as a mechanic at Fairfield’s car dealership in Keene when it was in the space now occupied by Applebee’s. Facing the draft and not wanting to end up in the Army, he instead enlisted in the Marines.

He well recalls his first day of boot camp at Parris Island in South Carolina.

“It was the worst day of my life, but little did I know I’d have a series of worst days of my life in boot camp. What was it like? Watch the first part of the movie ‘Full Metal Jacket.’ ”

He trained as a radio operator and served in Okinawa for 20 months, then returned to Keene after his discharge.

What did he learn in the Marines? His answer is typical DiBernardo, as his listeners would recognize: “The Marines taught me how to pick up cigarette butts and how to run a floor buffer. Everybody in the service learns how to pick up cigarette butts,” he quips. “Actually, I learned discipline, camaraderie, trust and how to stand by your mates. I learned esprit de corps.”

DiBernardo can still easily fit into his Marine uniform, and occasionally dons it for parades on Memorial Day and Veterans Day. “I’ve always been thin; I come from a long line of skinny serfs and peasants,” he says with a smile.

Back home in Keene, he got jobs pumping gas and working as a dishwasher at the old Tiffany Tavern. Eventually, he traded that up for a job as a mechanic at the Gulf Service Station on West Street, now long gone.

Then, he met the woman who would become his wife.

“I took her from the convent,” he says, jokingly, explaining that he met her at the old convent at St. Bernard’s Catholic church on Main Street, which is now the Clairvaux Center at the Parish of the Holy Spirit. At the time, the nuns rented out small apartments in the convent to single women. DiBernardo’s younger sister lived there, as well as his future wife, and his sister had invited DiBernardo to a Halloween party.

“It was love at first sight; our fates were sealed,” DiBernardo says.

“At first I didn’t like him,” says his wife, Patsy, but her smile contradicts her words. “I called him; I thought maybe he was the one. My father had always said you’ll know it when the right one comes along.”

They eloped and were married May 25, 1974, at St. Bernard’s, the only attendants DiBernardo’s brother and sister. “The only other person in the church was an old lady praying the Rosary way in the back.”

Then he got a job at Keene Gas, where he stayed for 18 years, starting as a serviceman and ending up as assistant general manager.

During that time, DiBernardo earned his bachelor’s degree in management from Keene State College, 19 years after he first enrolled, graduating in 1998.

After leaving Keene Gas, he took a year off, then joined the Phoenix House drug and alcohol rehabilitation center as a case manager and counselor. After two years there, he taught driving classes to people who’d been convicted on charges of driving while intoxicated, through the Impaired Driver Intervention Program of the N.H. Department of Health and Human Services.

In 2005, he got a job as a driver for Meals on Wheels and the Friendly Bus, both administered by Home Healthcare, Hospice and Community Services.

After seven years at the wheel, he retired, until the part-time WKBK position came along.

Now, DiBernardo wants to spend more time with his grandchildren, as well as to continue reading and meeting with friends at McDonald’s in the morning as he has done almost daily for years.

“It’s mostly the old guys; it’s comfortable and inexpensive. You get free refills, and they don’t throw you out. It’s just our version of sitting around the cracker barrel in the general store.”

He’ll undoubtedly keep holding court there, choosing just the right words and making sure to use the proper grammar.

At a glance: John DiBernardo