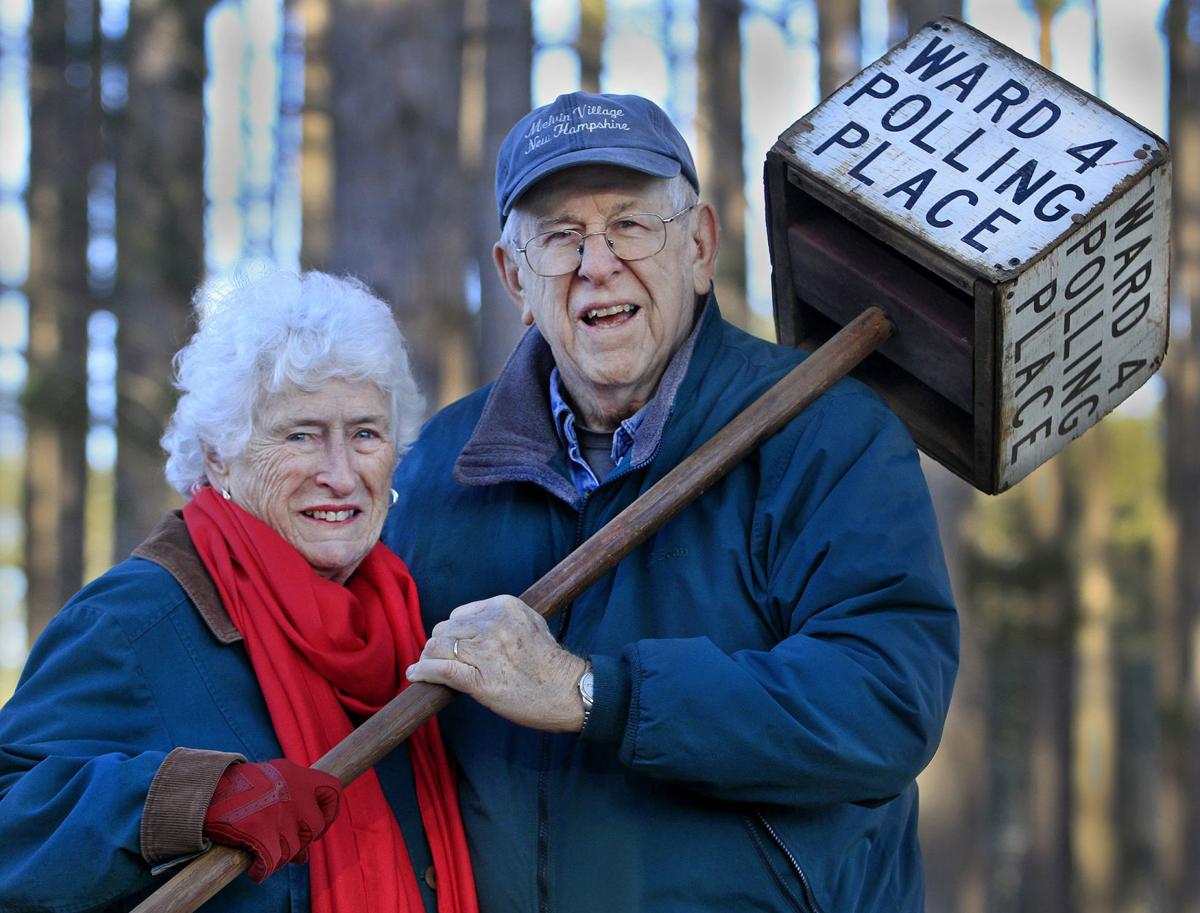 Bohannon are longtime election officials in Keene’s Ward 4: Barbara, 80, as

moderator; David, 83, as a selectman.

The married duo is

stepping down. The Nov. 5

municipal election was their last. 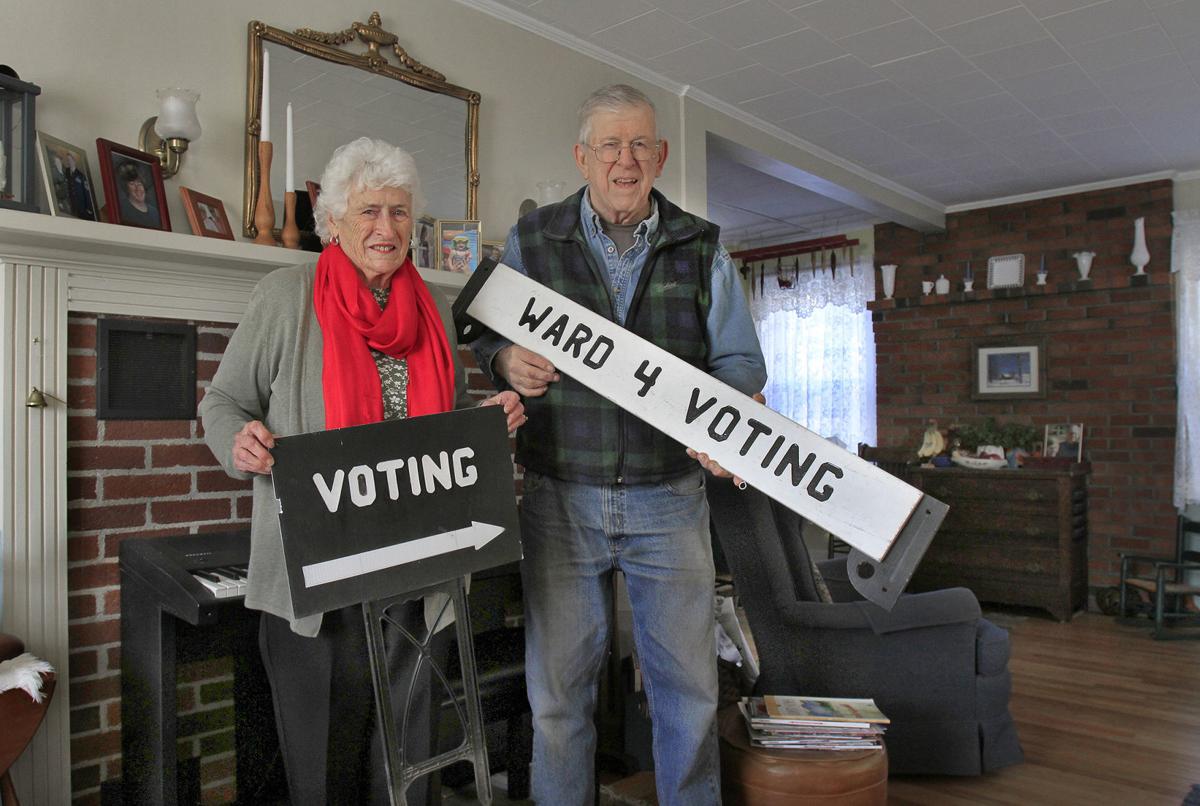 Barbara and David Bohannon of Keene, longtime election officials at Ward 4 polls, at home with some of the signage they use on voting days. 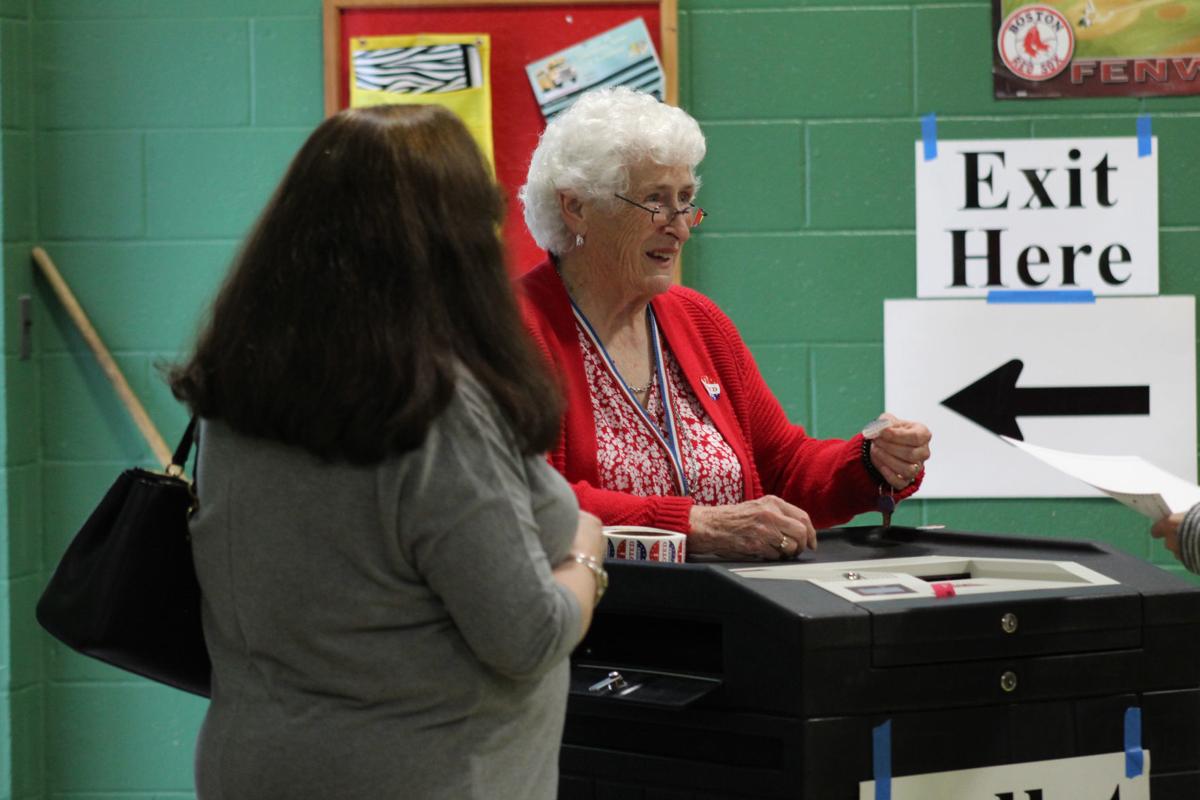 “It’s so rewarding,” Barbara Bohannon said of serving as an election official in Keene. “… You get to meet your neighbors, for one thing. People that live in the ward.” Bohannon, Ward 4's moderator, is shown here at the polls during the city's primary in October. 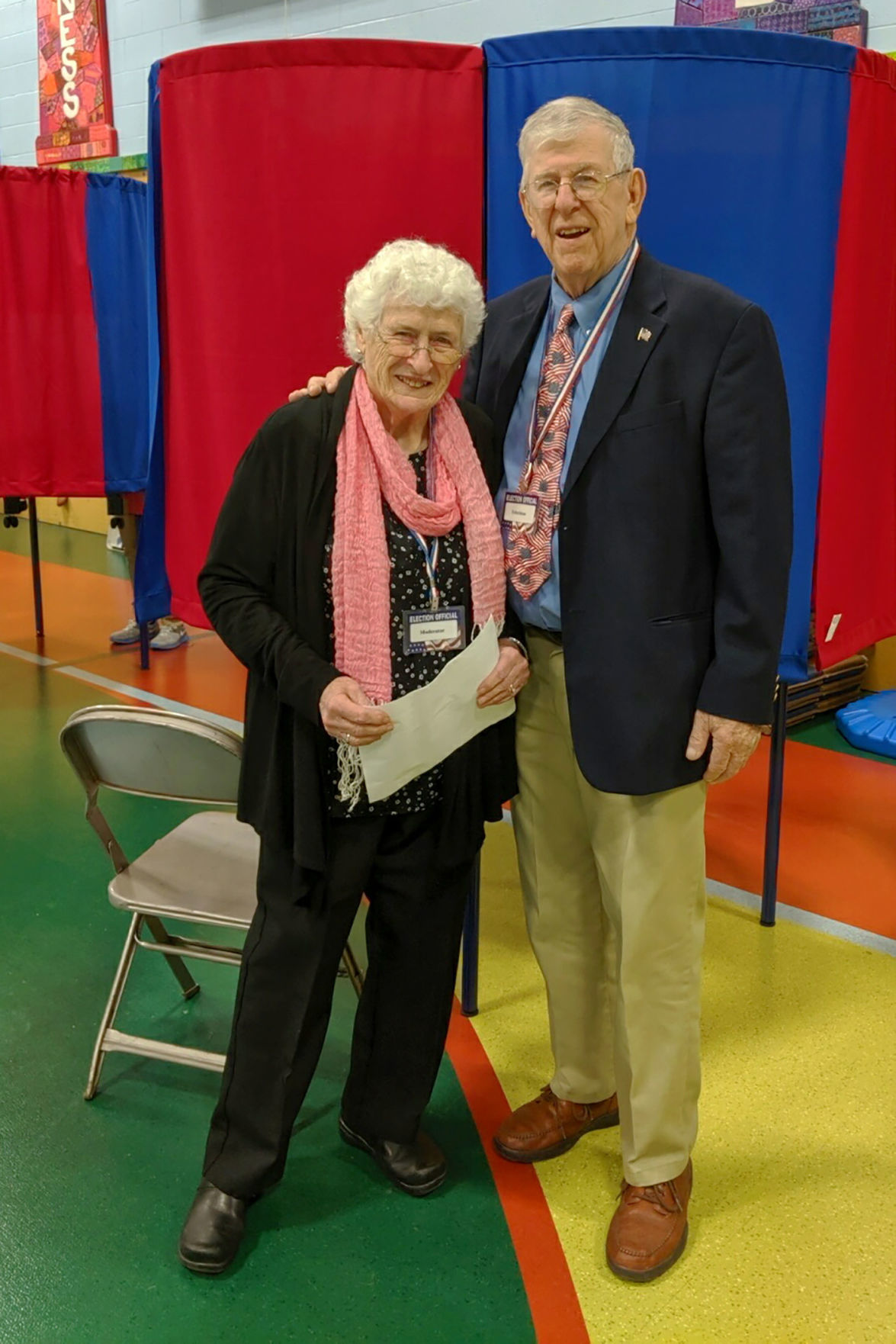 Barbara and David Bohannon at the Ward 4 polls at Symonds School in Keene during the municipal election earlier this month, their last as election officials.

Bohannon are longtime election officials in Keene’s Ward 4: Barbara, 80, as

moderator; David, 83, as a selectman.

The married duo is

stepping down. The Nov. 5

municipal election was their last.

Barbara and David Bohannon of Keene, longtime election officials at Ward 4 polls, at home with some of the signage they use on voting days.

“It’s so rewarding,” Barbara Bohannon said of serving as an election official in Keene. “… You get to meet your neighbors, for one thing. People that live in the ward.” Bohannon, Ward 4's moderator, is shown here at the polls during the city's primary in October.

Barbara and David Bohannon at the Ward 4 polls at Symonds School in Keene during the municipal election earlier this month, their last as election officials.

Ward 4 needed another worker for election day. The moderator — who supervised the polling place in that part of Keene — asked his next-door neighbor, Barbara Bohannon. “They had to fill a slot, and he talked me into it,” she said.

That was in 1983. She’s worked nearly every election day since. Her husband, David, has joined her at the polls for about the past two decades.

“It’s so rewarding,” Barbara said. “… You get to meet your neighbors, for one thing. People that live in the ward.”

Barbara, 80, and David, 83, longtime Keene residents, have each had their own roles at the polling place. After her first year as a ballot inspector — a worker who checks in voters — Barbara served as an elected election official beginning in 1984. Since 2000, except for a few years off, she has overseen the process as Ward 4’s moderator.

David has been a ward selectman, another elected position, since 2002.

“When she got into being moderator, she had asked me to do this and do that,” David said. “I said, ‘Well, if I’m gonna be doing this, I might as well run for the office and get paid for it.’ ”

“Unless, God forbid, they push the presidential primary into December,” Barbara said. “Which I don’t think they’re going to do.” (It’s expected to be Feb. 11.)

Barbara was born and raised in Keene; David moved here as a kid. They started dating in high school and have been married more than 61 years.

“I love Keene,” Barbara said. “It was a good place to raise a family. We had five children.” Their youngest, Andrew, is the city’s parks, recreation and facilities director.

David served in the U.S. Air Force and, after working at a few other places, eventually landed a job with Kingsbury Corp. in Keene. His father worked there, too.

“It was a very family-oriented business,” David said of the now defunct machine-tool manufacturer that was once Keene’s largest employer. “I can remember the president coming around and shaking everybody’s hand on Thursday. And if you had a relative who wasn’t feeling good, he’d always ask, ‘How’s Uncle Joe doing?’ ”

David worked as a service technician, and retired in 2000 after 36 years at the company.

Barbara stayed home until Andrew was in junior high. She later held different jobs in Keene, including as a tutor in the school district.

They have kept busy in retirement. Barbara’s involved in church organizations and social groups; David has volunteered with the Red Cross and Boy Scouts and practices wood turning. Both have a passion for Dutch oven cooking.

When her neighbor asked her to be a ballot inspector, Barbara said she didn’t know much about what she was signing up for. But she quickly took a liking to it. She had the time, and it was a way to connect with people and serve the city, she said.

“I think it was seeing the people, and being able to find their name and check them off and give them a ballot,” she said. “It made me feel good that they were voting, because I’ve always been very patriotic anyway, and I want people to vote.”

‘It takes a team leader’

According to staff in the Keene city clerk’s office, records show Barbara first served as a Ward 4 selectman in 1984. She later served briefly as ward clerk before becoming moderator in 2000. David became a selectman in 2002, having worked as a ballot inspector at some point in the 1990s.

“I like to think this is the only day that she’s my boss,” David joked.

“I’ll let him get away with that, after 62 years,” Barbara said, laughing.

The moderator is “the chief” at each polling place, figuring out staffing needs, making sure people know their roles and assigning tasks, Keene City Clerk Patty Little said. The selectmen — three in each ward — are “sort of a jack of all trades,” she said. They put up signs, set up tables and equipment, pack it up after and do other jobs as needed. They are also responsible for finding a new polling place if the location needs to change.

“Dave Bohannon is, like, the premier in terms of facilities,” she said, mentioning in particular his approach to signage. The city provides each ward with various signs to set up in the polling place. “Dave customized my signs,” she said — adding a little color or a red arrow, or bringing stanchions he made himself to hold signs. One stanchion this year incorporated a tractor’s steering wheel into the base, Little said.

“You’re gonna walk into that polling place in 2020 and say, ‘Wow, where’s all the signage? Where’s all the unique little things that were unique to Ward 4?’ ” Little said. “That all came from him.”

David has also been vigilant about watching out for congestion, inside and outside the polling place, Little said.

As for Barbara, Little called her an excellent team leader. “That’s really what makes these things work,” she said. Election officials are working 16-plus hour days, she said, “and if you don’t have people who love to be with you that length of time, and feel like, ‘OK, we know how to do this, we’re skilled enough, we can pull this off, we can have an accurate election, even in an exhausting environment’ — it takes a team leader to pull that together, and Barbara was a great one.”

Two days after an election, the Ward 4 team gets together for a dinner, Little said — a sign they get along well.

“They’re a great group,” Barbara said. “I’ve never had any that I could complain about.”

With both the Bohannons and the ward’s two other selectmen stepping down, Ward 4 will have a new team in place for the 2020 primary and general elections. “It’s a regime change coming in, with a new moderator and three new selectmen,” Little said. The newly elected Ward 4 moderator, Ellen Wishart, has experience with the position from a different ward, she added.

It’s not unusual to see turnover before a presidential-election year, when the polls are much busier, according to Little. “They know what’s on their horizon.”

A typical election day for the Bohannons starts when they leave the house around 6 a.m., they said. David starts putting up signs at Symonds Elementary School, the Ward 4 polling place, a couple blocks from their home. He’ll have put some, not all, out the night before.

Barbara heads to City Hall to pick up the ballots, the voting machine and the “death list” — names of people who have died since the last election, a check against fraudulent voting.

Other election officials show up around 7 a.m. and set up tables and voting booths. They make sure the tables have the supplies they need and the booths have pencils. Shortly before 8, when polls open, Barbara gathers the team and goes over any changes since the last election.

“And then it opens at 8 o’clock, and everyone gets busy, and I very rarely sit down,” she said. “Usually somebody’s calling me in some direction.”

At 9 a.m., Barbara and the ward clerk start opening the envelopes that absentee ballots have arrived in. Each contains a second, smaller envelope with the actual ballot inside. At 10 a.m., they start opening those envelopes, checking that the signatures match and feeding them into the machine.

Lunch hours are staggered, to keep the polls staffed.

The level of activity varies with the level of the offices on the ballot. Municipal elections tend to have low turnout. Presidential elections bring observers from the major parties and extra volunteers to handle the influx of voters. In those years, David said, you have to remind people to move along.

“It gets to be a problem with the visiting because — ‘Oh, I haven’t seen you for a while,’ and you want to talk,” he said. “But then it kind of backs up a bit. People have to go around you.”

If they don’t add up, the work continues. “If we’re one or two off, we go back until we find it. And we usually do. We always do, really,” she said.

“I’ve seen it where we get out of there in an hour, hour and a half,” David said. “And other times, I’ve seen it when it’s one o’clock in the morning. Tough on the janitor.”

It went even later during Barbara’s first years at the polls. With no voting machines, election workers in the city counted every ballot by hand.

The early mornings, late nights and long hours are getting harder at their age, which is why they chose to retire, Barbara said. “And it’s time for some younger people to do it.”

“I don’t think I’ve ever seen young people do it,” David clarified. By “younger people,” he said they mean those in their 40s and 50s.

Though they’re stepping away from their positions as moderator and selectman, Barbara doesn’t rule out returning to work at the polls in some capacity.

“I did tell Patty I’d be glad to help out any way I can,” she said, referring to the city clerk.

“It’s going to be very hard. I’m not looking forward to that,” Barbara said.

“And we can’t do that,” Barbara said. “Because they’ve all got their own way.”

At a glance: Barbara and David Bohannon